Accessibility links
MacArthur 'Genius' Paints Nigerian Childhood Alongside Her American Present Njideka Akunyili Crosby was born in Nigeria and moved to the U.S. when she was 16. Her large-scale paintings reflect her life in both countries. 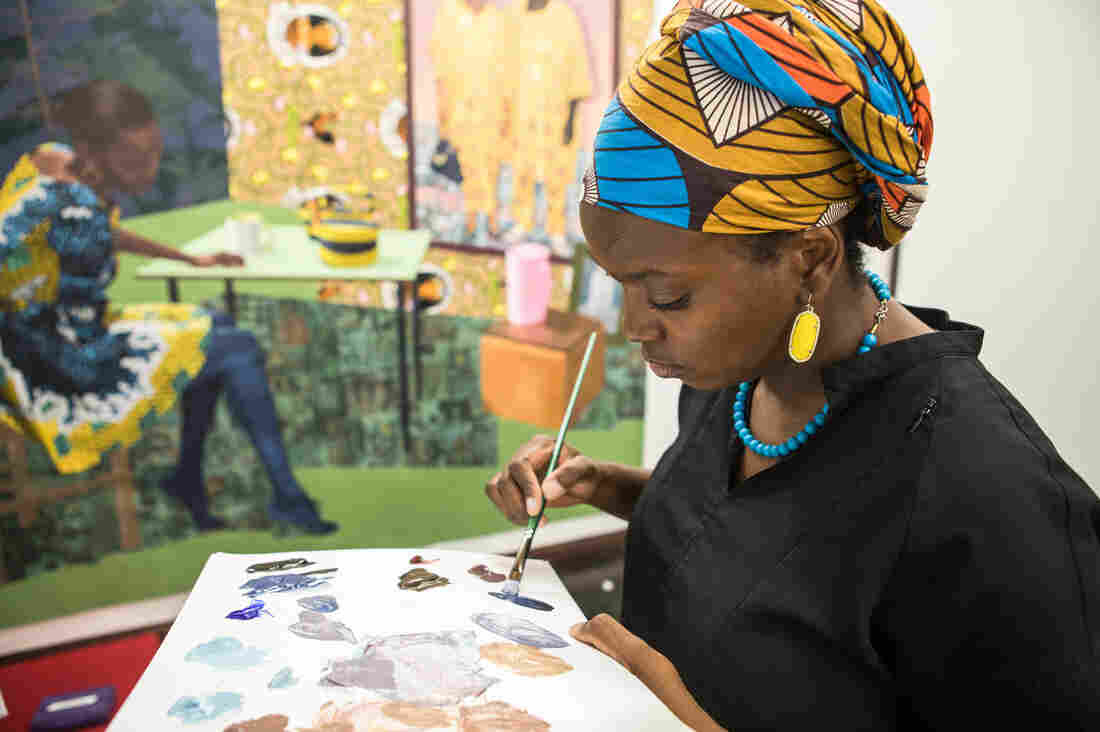 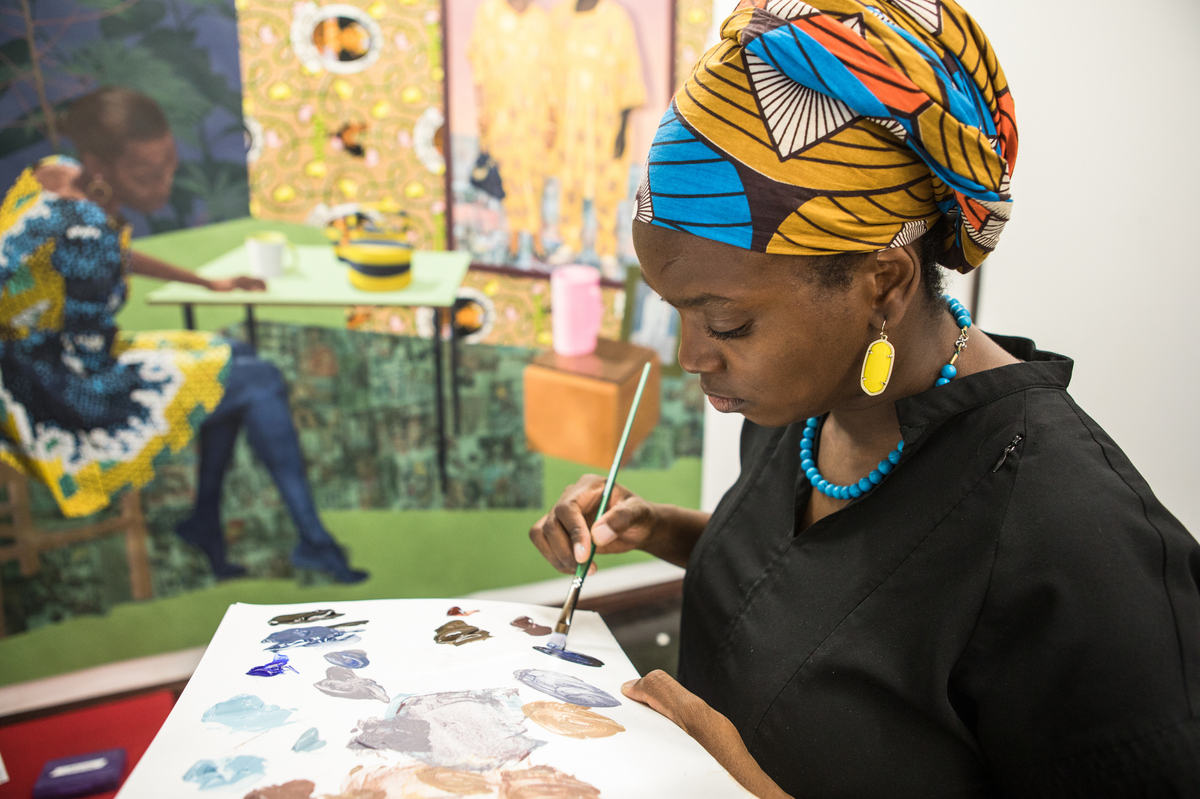 Visual artist Njideka Akunyili Crosby, 34, is having a moment. In 2017, she won a so-called MacArthur "genius" grant, and over the past few months her work has been shown in Baltimore, New Orleans and upstate New York.

Akunyili Crosby was born in Nigeria and moved to the United States when she was 16. Her large-scale paintings (some as big as 8 by 10 feet) reflect her life in both countries. They show groups of people in Nigeria or Brooklyn or Los Angeles, and incorporate photographs of politicians, images of ancestors (mostly women) and objects that signify life in both cultures — a bowl to hold rice, a kerosene lamp, Ikea furniture.

Akunyili Crosby says, "I think the point I make in my work is that my home is Nigeria and the United States at the same time."

The painter holds citizenship in both countries. She listens to both Grace Jones and Nigerian pop in her studio, and, when filling out forms, she never knows what to put down as her permanent residence. "That really is what it means, for me, to be an immigrant, is this navigation of two worlds at the same time," she says.

Many of her works contain a sort of portal between figures, like an open space in a wall, and she often paints members of her family. I Still Face You shows people around a table; the artist is standing and gazing down at the only white person there — her now-husband. Akunyili Crosby's I Still Face You was inspired by her now-husband's first visit to Nigeria. Joshua White Photography/Courtesy of the Artist and Victoria Miro, London/Venice hide caption Akunyili Crosby's I Still Face You was inspired by her now-husband's first visit to Nigeria.

Joshua White Photography/Courtesy of the Artist and Victoria Miro, London/Venice

"That is loosely based on what happened the first time he visited Nigeria." Akunyili Crosby says. "Yes, there was a very serious family meeting that probably had three times the number of people in that painting. And it was, 'So, young man, what are your plans? Are you going to marry her? How will you guys make it work in a country that is still very racist?' " (They now have a young son.)

Ian Berry, director of the Tang Museum in Saratoga Springs, N.Y., says this is a critical time to show artists like Akunyili Crosby, whose work looks like the museum's visitors. "I think Njideka's work presents a complicated ... view of what it means to be from different places and of different places and living in a contemporary world," he says. "So seeing her version of portraiture where people are a complex mix, I think, is very valuable right now."

Trevor Schoonmaker is the chief curator at the Nasher Museum of Art in Durham, N.C., and artistic director for "Prospect.4," a New Orleans-wide art show that includes Akunyili Crosby's work. He says, "There's enough beauty and recognizable something [in Akunyili Crosby's paintings] that we can all relate to no matter where we're from, that just pulls you in." 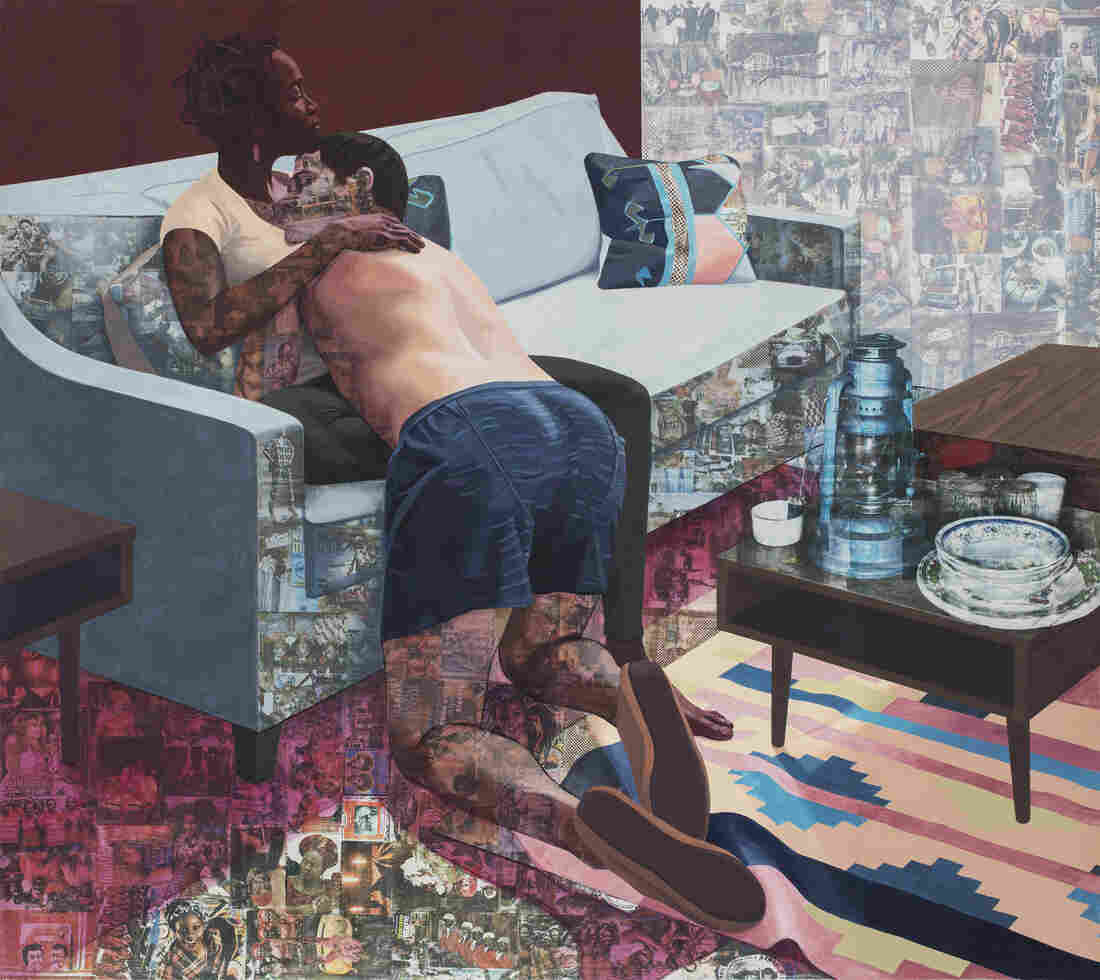 Ike ya shows Akunyili Crosby and her husband in their home in the U.S. Courtesy of the Artist and Victoria Miro, London/Venice hide caption

toggle caption
Courtesy of the Artist and Victoria Miro, London/Venice Ike ya shows Akunyili Crosby and her husband in their home in the U.S.

Courtesy of the Artist and Victoria Miro, London/Venice

He's especially intrigued with the way the artist layers different worlds and images, mixing acrylics, colored pencils and photos to at least partly cover nearly every figure, from a Nigerian Michael Jackson impersonator to a former dictator to Janelle Monáe.

Akunyili Crosby got the call about the MacArthur grant while she was parking her car. "The only reason why I picked it up is I'm curious — I love answering numbers I don't know," she says. "And I picked it up and it was the MacArthur Foundation. It was very bizarre, but also very happy!"

That curiosity feeds her work. As an undergrad, Akunyili Crosby majored in both studio art and biology. Today, the many layers in her paintings serve as membranes, enabling a cultural osmosis between the living rooms of her Nigerian childhood and those of her current life in Los Angeles.

Tom Cole and Kat Lonsdorf edited and produced this story for broadcast. Nicole Cohen adapted it for the Web.