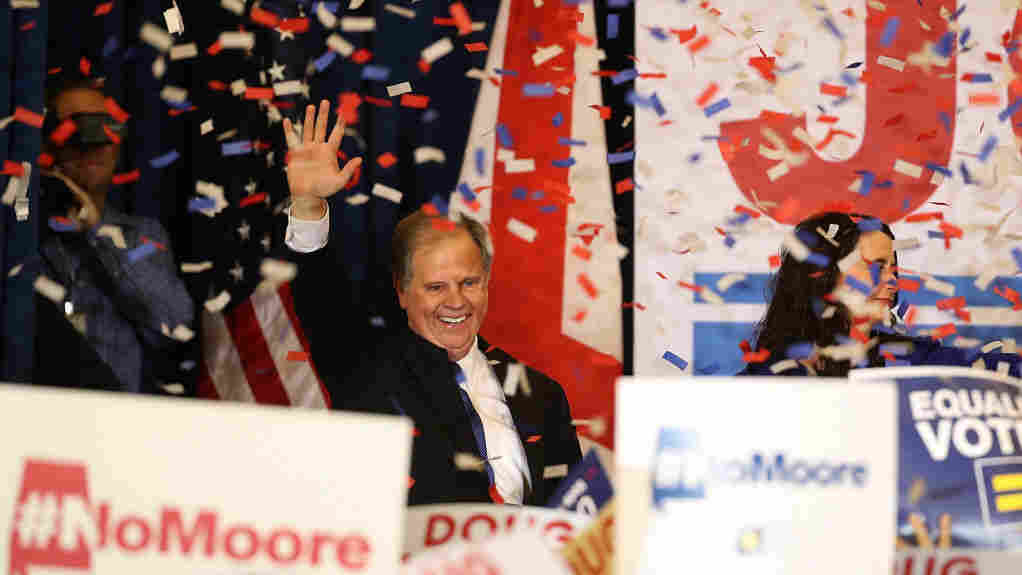 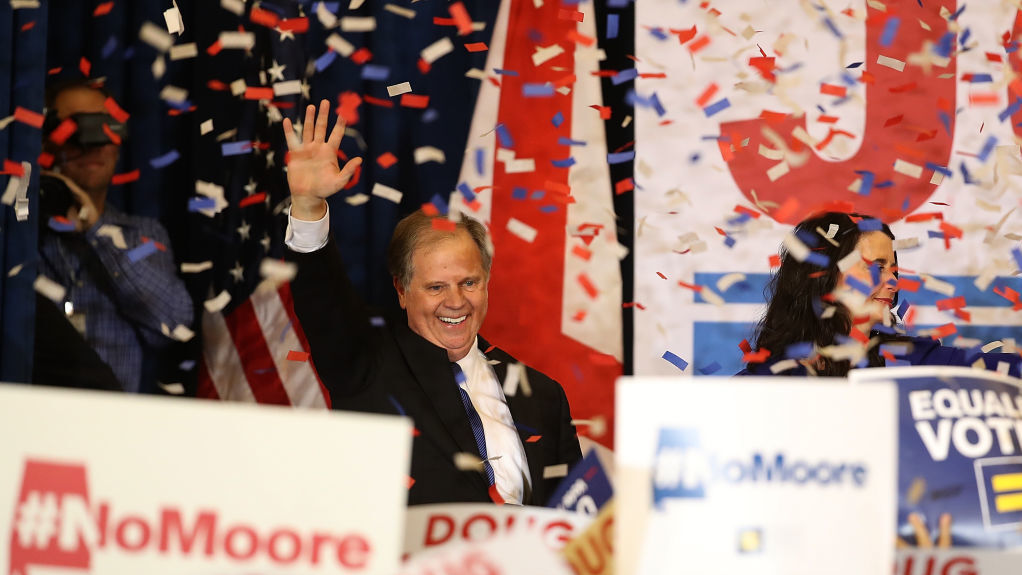 There are two new faces and a slimmer GOP Senate majority as the chamber returned to kick off 2018 on Wednesday.

Alabama Democrat Doug Jones takes the seat once held by Attorney General Jeff Sessions, after his December victory over controversial GOP nominee Roy Moore, who was accused by several women of sexual assault and misconduct against them when they were teens and he was in his 30s.

The upset victory by Jones narrowed Republicans' hold on the Senate to only one seat, 51-49. That's noteworthy going into a midterm election year, making Democrats' impossible path to a Senate majority now just improbable. They're still largely on defense, with 10 Senate Democrats up for re-election in states that President Trump won. But if they can flip the GOP-held Arizona and Nevada seats — which are highly competitive — and defend all their incumbents, there's a way.

Democrats also have a new seat to defend with Wednesday's swearing-in of Minnesota Democrat Tina Smith. The state's former lieutenant governor takes the place of former Democratic Sen. Al Franken, who resigned amid allegations of sexual misconduct. Smith will run for the remainder of Franken's term in November, though she could face a primary. Republicans are eyeing their chances in a state that Trump lost by less than 2 points. Former Gov. Tim Pawlenty could run, and former Rep. Michele Bachmann said recently on televangelist Jim Bakker's radio show that she is also considering a bid.

The entrance of both Jones and Smith signals a shift in the Senate. Jones is someone whom Republicans are sure to target as a potential crossover vote, and he may be amenable given that he will have to run for re-election again in 2020 in deep red Alabama — and probably not against a scandal-plagued challenger.

Smith's swearing-in means there are now a record 22 women in the Senate — something that isn't insignificant given the rise of sexual assault and harassment claims across the country and the circumstances of both Franken's exit and Moore's loss. And she will serve alongside the state's other senator, Democrat Amy Klobuchar, making Minnesota the sixth state to ever have two women represent it simultaneously in the Senate.

Even though Jones won a special election for his seat and Smith was appointed, it's Smith who will have the seniority edge since she and Jones are being sworn in at the same time — simply because Minnesota is more populous than Alabama.

Here are some things to know about both Smith and Jones: 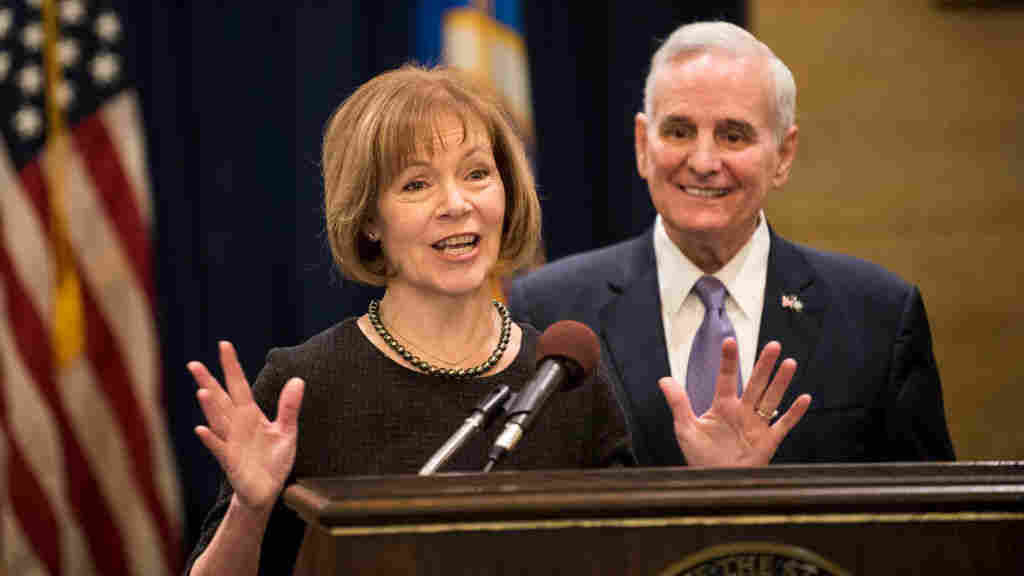 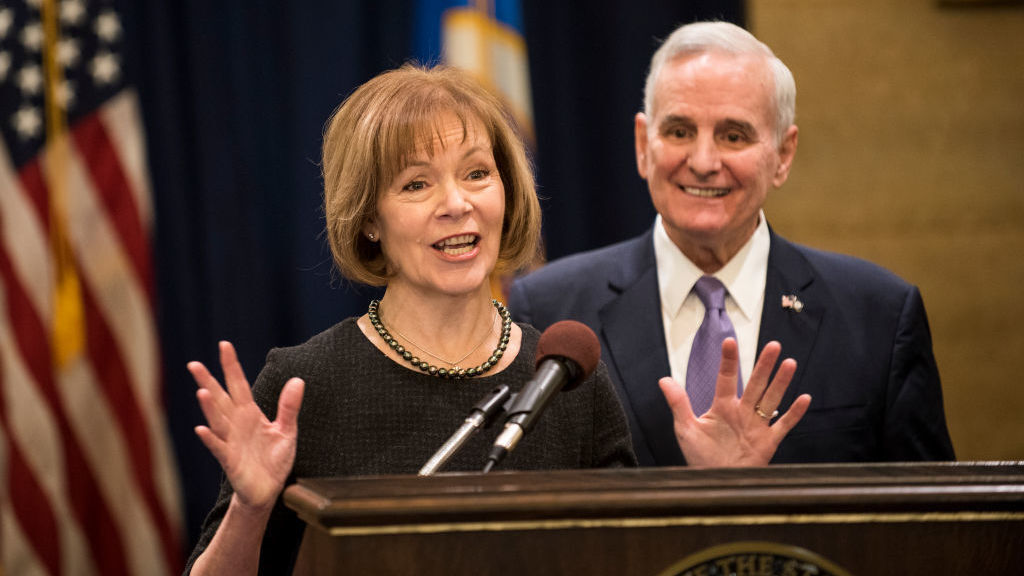 Smith has long been involved in politics, but her time as an elected official has been relatively short. Her first elected role is the one she just left — lieutenant governor. Minnesota Democratic Gov. Mark Dayton chose her as his running mate in 2014 after she had served as his chief of staff and top adviser.

Before joining Dayton's team, Smith worked for his onetime gubernatorial opponent, Minneapolis Mayor R.T. Rybak. She also served as Rybak's chief of staff and his campaign manager, though he bowed out against Dayton during the Democratic-Farmer-Labor Party's nominating convention, with Dayton going on to win the subsequent primary.

Rybak told the Minnesota Star-Tribune in a 2013 profile of Smith that she was known as the "velvet hammer" around City Hall because "she jumps into a problem and tries to fix it rather than complain about it." Rybak also said Smith was known as "every Republican's favorite Democrat" because of her ties to the business community, which is where she got her professional start. A New Mexico native, she graduated from Stanford, earned an M.B.A. from Dartmouth and later moved to the Twin Cities to take a marketing job at General Mills. That led to her becoming involved in local politics, and eventually she served as the vice president of Planned Parenthood of Minnesota, North Dakota and South Dakota.

Smith also has close ties to the Mondales, one of the most famous families in Minnesota politics. She served as campaign manager for the 1998 campaign for governor by Ted Mondale, the son of former Vice President Walter Mondale. And she advised the elder Mondale's last-minute 2002 campaign for Senate after incumbent Democratic Sen. Paul Wellstone died in a plane crash only 11 days before the election. Both campaigns were unsuccessful.

Smith also gained a reputation for tempering Dayton, who the Star-Tribune noted had "a reputation for being critical, demanding and occasionally blustery. ... Among those close to her, Smith is known for cajoling Dayton in a certain direction rather than confronting him toe-to-toe. She tries to surround him with a diverse range of voices and opinions, allowing him to draw conclusions and make decisions."

"One of the things I have learned is that the person has to be who they are," Smith told the paper. "You can't turn them into a version of who they are. If you do that, you are not really serving them very well."

This Senate seat is Jones' first foray into electoral politics, though he has also been active in Democratic politics for some time.

Jones is a former U.S. attorney for the Northern District of Alabama who was nominated for the post by President Bill Clinton in 1997, serving until 2001.

His most high-profile case was successfully convicting two Ku Klux Klansmen for the 1963 bombing of the 16th Street Baptist Church in Birmingham, which killed four young African-American girls. That experience was invoked by Jones in campaign ads and may have helped him win record support from black voters, especially African-American women, en route to his upset of Moore in the deeply conservative state.

Jones also helped prosecute Eric Rudolph for the 1998 bombing of a Birmingham abortion clinic that killed an off-duty police officer and injured a nurse.

Jones has worked in the Senate before, serving on the Judiciary Committee staff for Alabama Democratic Sen. Howell Heflin, the last Democrat who represented the state in the Senate until retiring in 1997. He would return to Alabama to work as an assistant U.S. attorney and then began practicing criminal defense. As the Montgomery Advertiser noted, his defendants included a man accused of supplying Contras in Nicaragua. Another was former Gov. Don Siegelman, who was eventually convicted of bribery and obstruction of justice, though Jones didn't represent him during that trial.

Jones did hold elective office when he was a student at the University of Alabama, serving in the student Senate and as president of the Off-Campus Association. While attending school, Jones also worked at a steel mill.

Jones ran for the U.S. Senate for a short time in 2002 before dropping out after facing trouble raising money — not unusual given the conservative nature of the state. But when the seat opened up again with Sessions' appointment to lead the Justice Department, relationships in what had long been a weak Alabama Democratic Party paid off. One of the people who urged him to run and later campaigned for him was former Vice President Joe Biden, whom, NBC News reported, Jones had once introduced to speak during remarks at his law school and later reconnected with when he was working on the Judiciary Committee.