Accessibility links
Trump Dissolves Controversial Election Commission The president has claimed, without evidence, that as many as 5 million illegal votes were cast in the 2016 presidential election. The commission had been mired in legal battles. 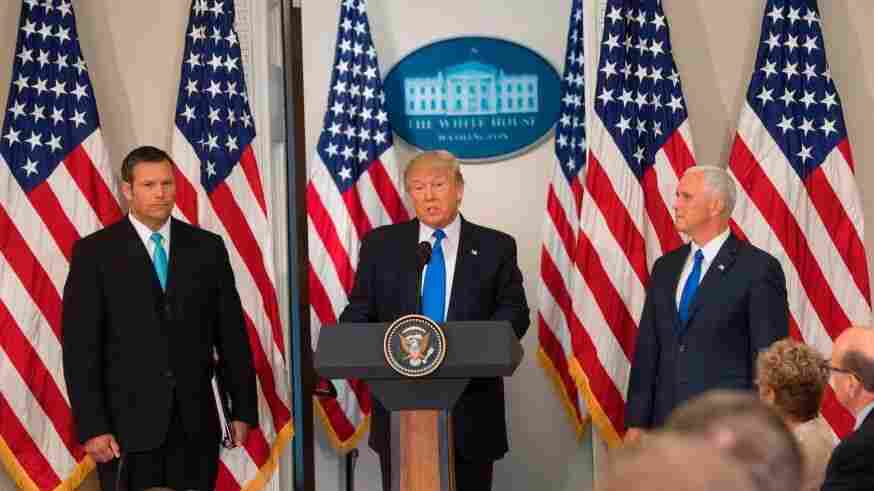 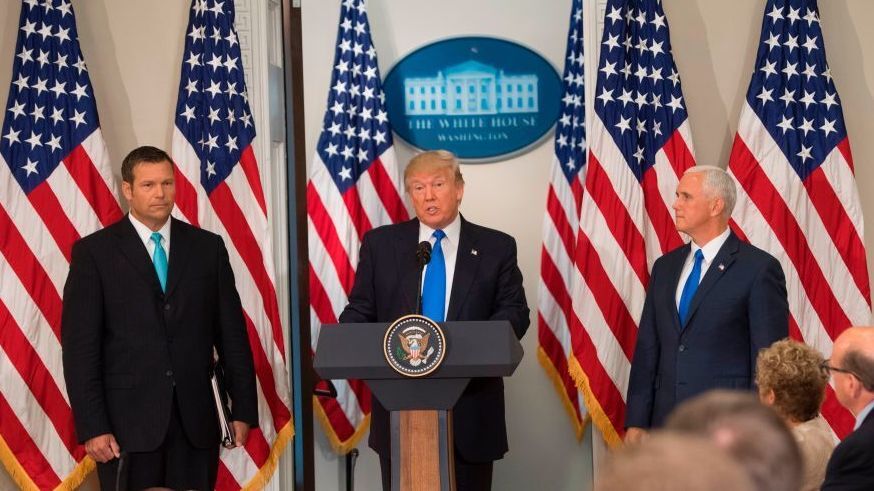 President Trump, flanked by Kansas Secretary of State Kris Kobach and Vice President Pence, speaks during the first meeting of his Presidential Advisory Commission on Election Integrity in July.

The White House announced Wednesday that President Trump's controversial Advisory Commission on Election Integrity — which was mired in lawsuits and had received pushback from states over voter data requests — has been dissolved.

"Despite substantial evidence of voter fraud, many states have refused to provide the Presidential Advisory Commission on Election Integrity with basic information relevant to its inquiry," White House press secretary Sarah Huckabee Sanders said in a statement. "Rather than engage in endless legal battles at taxpayer expense, today President Donald J. Trump signed an executive order to dissolve the Commission, and he has asked the Department of Homeland Security to review its initial findings and determine next courses of action."

Trump created the commission in May 2017 after he continued to insist that as many as 5 million votes were cast illegally in the November 2016 presidential election where he bested Democratic rival Hillary Clinton. But there has been no evidence to back up that claim, and the president's assertions have been dismissed by election officials and experts. Trump won the Electoral College, giving him the White House, but he lost the popular vote to Clinton by almost 3 million votes.

Multiple lawsuits were filed against the group, which some Republicans on the panel last fall complained ultimately hobbled its work.

Democrats and voting rights groups were quick to cheer the panel's demise. In a statement, Senate Minority Leader Chuck Schumer, D-N.Y., said that it was nothing more than "a front to suppress the vote, perpetrate dangerous and baseless claims, and was ridiculed from one end of the country to the other. This shows that ill-founded proposals that just appeal to a narrow group of people won't work, and we hope they'll learn this lesson elsewhere."

The commission was touted by the White House as bipartisan but was led by Vice President Pence and Kansas Republican Secretary of State Kris Kobach, who has long claimed there is widespread voter fraud by noncitizens despite providing no evidence of any such improprieties and only prosecuting a few fraud cases in Kansas.

The group's first action was to ask states for detailed voter data, including the names, addresses, birthdates, partial Social Security numbers, party affiliation, felon status and other data for every registered voter. But several states expressed concern over how such information might be used by the administration.

"I'm not going to risk sensitive information for 3.2 million Kentuckians getting in the wrong hands, into the public domain and possibly for the wrong reasons, to keep people away from the ballot box," Kentucky Democratic Secretary of State Alison Lundergan Grimes told NPR's Ari Shapiro during an interview on All Things Considered in June.

It wasn't just Democrats who were resisting. Mississippi Republican Secretary of State Delbert Hosemann said that when he received the data request, his response would be to tell the commission to "go jump in the Gulf of Mexico and Mississippi is a great State to launch from."

Ultimately, the panel held only two meetings, and Democrats on the commission complained they weren't being kept up to date about the group's actions.

In October, Maine Democratic Secretary of State Matthew Dunlap wrote in a letter to the commission's executive director that he had "received utterly no information or updates from Commission staff or leadership about ongoing active research, inquiries for research requests, documents for consideration during future meetings, or indeed any information about whether or not the Chair has plans on convening another meeting."

One of the five Democratic members died in October as well, and a researcher for the commission was arrested on charges of possessing child pornography.