Accessibility links
Robust Apprenticeship Program Key To Germany's Manufacturing Might Every year, about half a million young Germans enter the workforce through apprenticeship training programs. They provide a steady stream of highly qualified industrial workers.

This is the second of three reports from NPR's John Ydstie on Germany's manufacturing strength.

Manufacturing accounts for nearly a quarter of Germany's economy. In the U.S., it's about half that. A key element of that success is Germany's apprenticeship training program.

Every year, about half a million young Germans enter the workforce through these programs. They provide a steady stream of highly qualified industrial workers that helps Germany maintain a reputation for producing top-quality products.

Henrik Tillmann is among the current crop of young apprentices. The 19-year-old is training at Hebmuller Aerospace to be an industrial clerk, which qualifies him to do a variety of jobs from materials purchasing to marketing. Each week he spends three-and-a-half days at the company's production center, and a day and a half at a government-funded school. Before he can become a clerk, though, Tillmann must first learn how to build the valves Hebmuller sells to aerospace companies.

He will be a better clerk, says his boss, Axel Hebmuller, because he'll know the valves inside out when he describes them for customers. 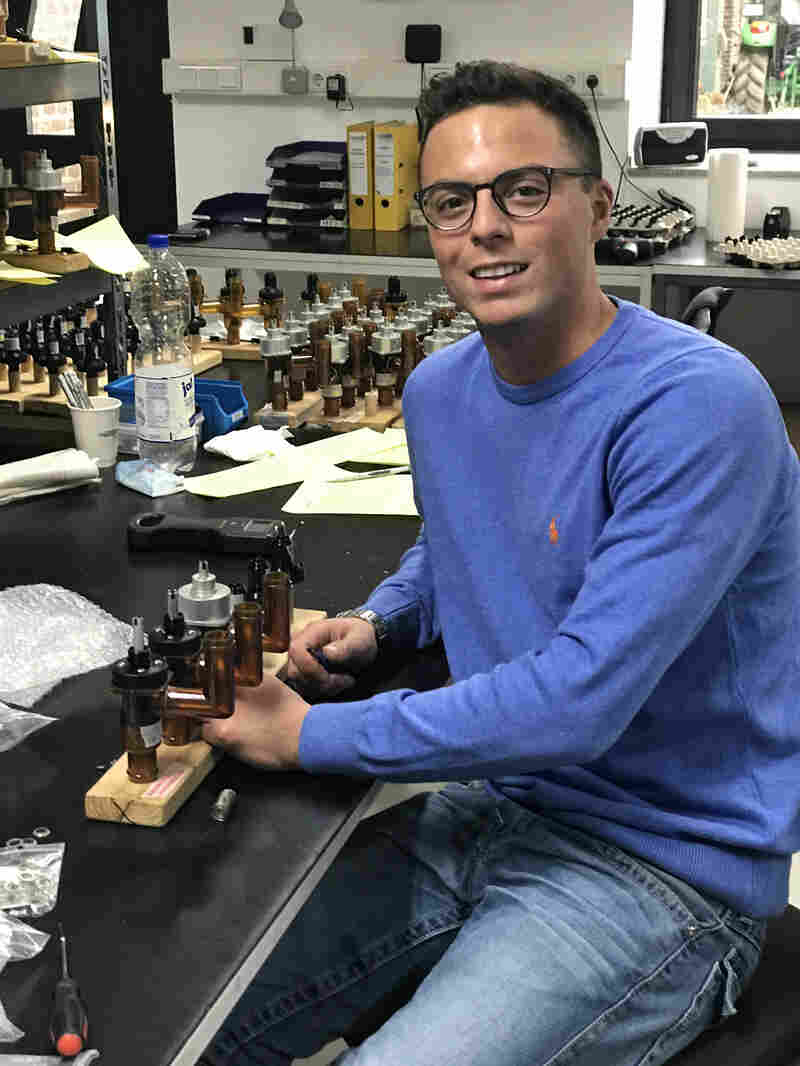 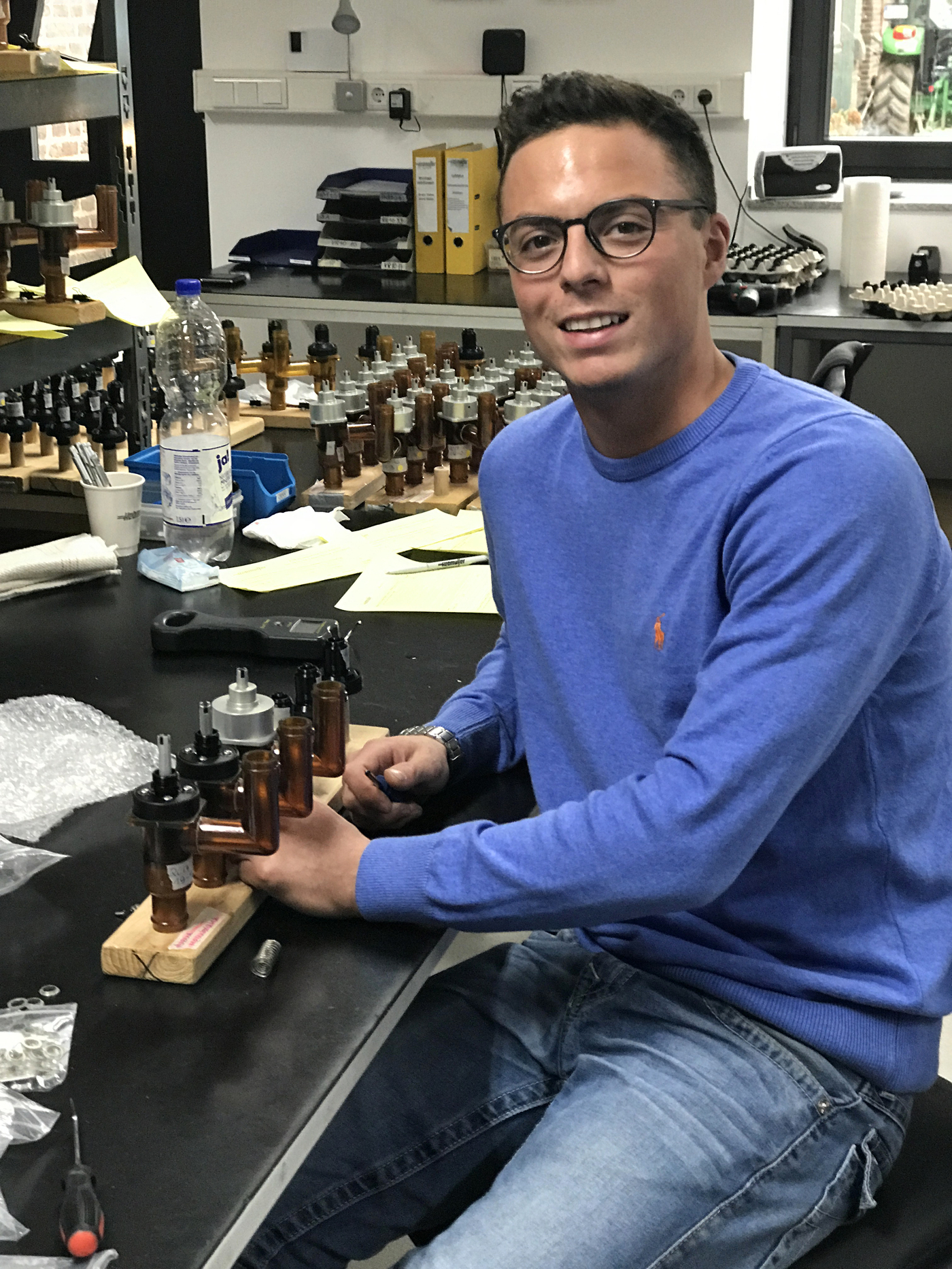 "I think it's much easier for young people to understand what they're doing, what they're learning, when they get a little practical work with it because then they can see what they learn at school," he says.

Hebmuller, a co-founder of this firm located near Dusseldorf, says small companies like his rely on apprentices. In fact, that's how he started his career: He was an apprentice at the local bank. "This is where I got my economy degrees," Hebmuller says.

"Even in some of the big, big companies in Germany, in the upper management levels you have people who only have an apprentice and don't even have any university degree," he says.

Apprenticeships are one of the foundations of Germany's manufacturing strength, and Felix Rauner, a professor at the University of Bremen, says U.S. presidents have taken notice.

"Every president of the United States [in] the last 30 years, after becoming elected, said, 'Oh, we should implement the apprenticeship system'," says Rauner.

Donald Trump is no exception.

Last June, at the White House, Trump signed an executive order aimed at boosting the number of U.S. apprenticeships by nearly tenfold to 5 million. But, experts doubt the goal will be realized because funding is inadequate.

Rauner, one of the world's leading authorities on apprenticeships and vocational education, says historically, the U.S. approach to vocational education has been ineffective partly because it's often not directly connected to specific jobs at real companies.

Also, says Rauner, U.S. society has stigmatized vocational education, so most American parents see college as the only path to status and a good career for their children. Rauner says there's a troubling trend in that direction in Germany, too. But, in Germany there's still lots of prestige attached when someone, trained through apprenticeship, achieves master status.

"If, for example, someone gets a meister title, it would be published in the local newspaper and there's a huge celebration. It is an important event," Rauner says. "No one in Germany is interested if someone gets a master degree in a university."

Ludger Deitmer, Rauner's colleague at the University of Bremen, says his son is an example of the benefits of an apprentice system.

"He started as an engineer, but after four semesters he gave it up and said no this is not really what I want," Deitmer says.

His son is now a tradesman who prefers to learn things by doing them and enjoys looking back after a hard days work and seeing what he has accomplished.

Deitmer is international research coordinator at the Institute of Technology and Education at the University of Bremen and has also studied apprenticeships extensively. He suggests the failure of the U.S. to widely provide this kind of training has hurt U.S. manufacturing, something President Trump says he wants to remedy.

"Vocational training should be one of the medicines, the key medicines, in how to make America great again," Deitmer says. "Why not? This is exactly what the country needs."

One barrier to apprenticeships in the U.S. is getting American companies to buy in, because of the cost of training. In Germany, a firm trains the apprentice and pays them a modest wage.

"But in the second year, they're already doing 60 percent of the workload of a fully skilled worker," Deitmer says. "So, there is a return."

Cheap apprentice labor reduces the net training cost to the company to a little over $10,000, Deitmer says. And, the real pay-off for companies, he says, is that after three years they've got a highly-skilled worker.

U.S. firms often complain about a lack of skilled workers, but the U.S. has struggled to create widespread apprentice programs. Felix Rauner says growing a viable American apprenticeship system will be difficult. Partly because the U.S. has historically had a barrier between schools and business, and partly because of the fractured nature of U.S. education, with 50 states in charge.