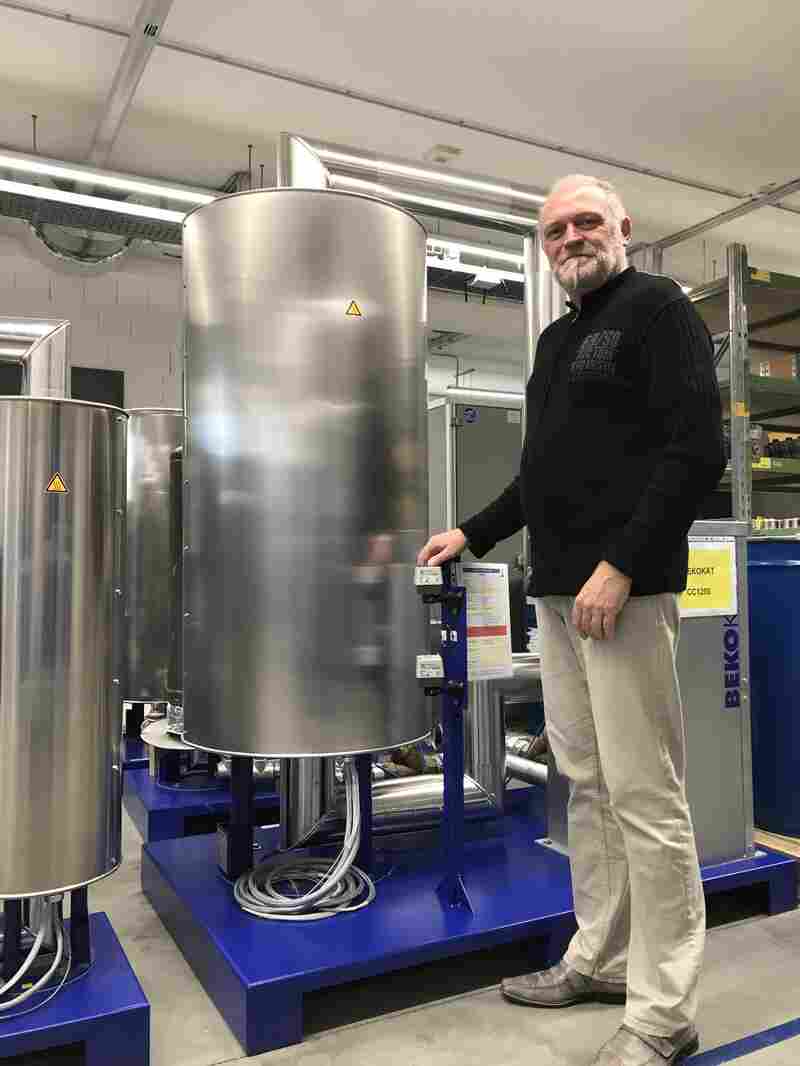 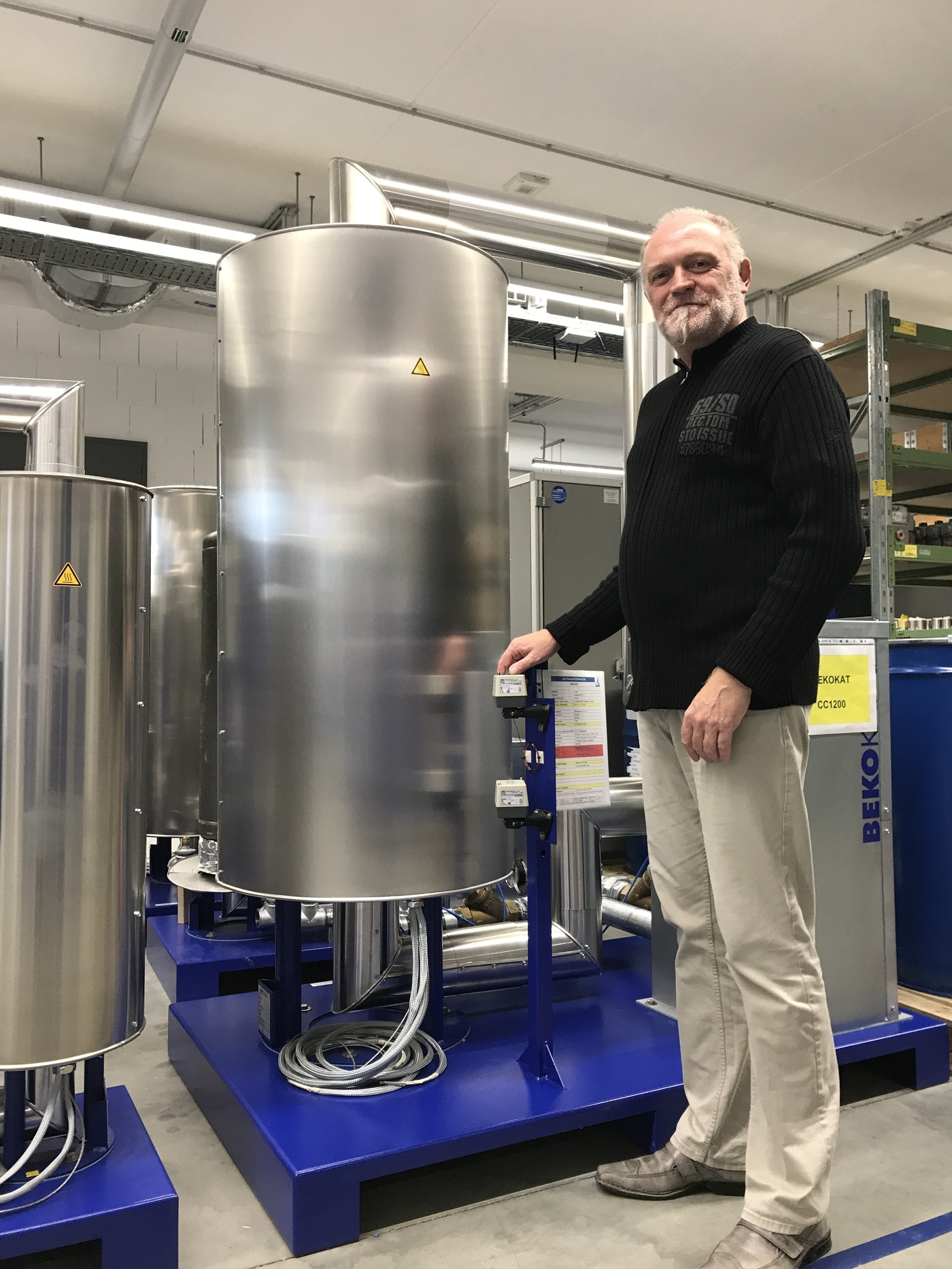 Rainer Stutzel of Beko Technologies stands beside a catalytic converter that cleans compressed air systems. The company exports its products around the world.

This is the third and final report in John Ydstie's series on Germany's manufacturing strength.

You've probably never heard of Beko Technologies. Its headquarters are in Neuss, Germany, and it makes filters and other products for compressed air systems, which are used in manufacturing, food processing and countless other applications. Beko may not be well known outside Neuss, but it's an excellent example of what makes Germany a manufacturing and export powerhouse.

And that strength has captured the attention of the Trump administration. Year after year, Germany runs huge trade surpluses. The U.S. hasn't seen a trade surplus in decades. President Trump has accused the Germans of cheating, without offering much in the way of specifics.

A look at Beko helps explain why Germany is such an exporting juggernaut.

The company's shipping area is a busy place. Boxes filled with filters, condensers or monitoring devices for compressed air systems are headed to workshops and factories all over the world.

"If you leave the condensate inside a compressed air system, and the compressed air goes to a paint job place, like painting cars with spray guns, not only would the paint come out of the spray gun, but lots of drops of air and oil and water and dirt and your car would look like hell," Stutzel explains.

That's why the world wants Beko's products. Stutzel says about half of what the company manufactures ends up outside Germany, through marketing subsidiaries in Asia and North America.

While the world knows all about the export prowess of German industrial giants like Daimler and Siemens, thousands of small and mid-sized companies like Beko Technologies are also big exporters. They helped push the German surplus in the export of goods to $280 billion in 2016. Meanwhile, the U.S. had a deficit of $750 billion.

Martin Baily, an economist at the Brookings Institution, says Germany's strength is partly the result of a strategy following World War II to rebuild its economy by focusing on manufacturing and exporting. Baily also says German firms are very motivated to export.

The big domestic market in the U.S. is an advantage in many ways, says Baily.
"But from a trade point of view, it means that most companies are like, 'Oh yeah, exports. Why would we export?' "

So, in part, German companies have simply out-competed other manufacturers.

What about President's Trump's claim that Germany is cheating on trade?

"It's not cheating," says Jeromin Zettelmeyer, a former economic official in the German government and now a fellow at the Peterson Institute for International Economics in Washington.

Germany does have an advantage, he says, but "the only sense in which I think Germany could be accused of 'cheating' is by being a member of the [eurozone]. There is no question that if Germany were to exit the [eurozone] today, this would lead to a pretty substantial appreciation of the German currency."

The euro has been Germany's currency since 1999. But if Germany still had the deutsche mark, its products would almost certainly be more expensive and less competitive in global markets. That's because the deutsche mark would reflect the real strength of the German economy. The euro doesn't. It reflects the less robust economy of the whole euro area and therefore German products, priced in euros, are less expensive and more competitive.

But Germany doesn't control the value of the euro. Its value is tied to the health of the whole eurozone economy. So the Trump administration's claim that Germany is cheating by holding the value of the euro down is misguided, according to Baily of the Brookings Institution and other economists.

There is another force that supports Germany's big trade surpluses. It saves far more than the U.S. The clearest sign of that is that the German government balances its federal budget or runs surpluses, while the U.S. government runs huge budget deficits. In other words, the U.S. borrows massively, instead of saving like the Germans do, says Baily.

"They are very disciplined on that, so they don't run those deficits," he says. "Their savings is high so they get the conditions right so they can have a trade surplus."

The U.S. has urged Germany to spend more on its infrastructure and other programs, which could draw more imports into Germany and lower its surplus. Baily and Zettelmeyer agree that could be good for Germany and its trading partners. But many Germans are proud that what they produce is in demand around the world, and they're not inclined to save less or spend more to mollify their critics.

An earlier version of this story incorrectly referred to Daimler-Benz. The correct name of the company is Daimler.