Accessibility links
In 'Red Sky At Noon,' A Western On The Eastern Front Simon Sebag Montefiore's new novel, set during World War II, follows a Jewish political prisoner who's pressed into a battalion of convicts and Cossacks and sent to fight the Nazis on horseback. 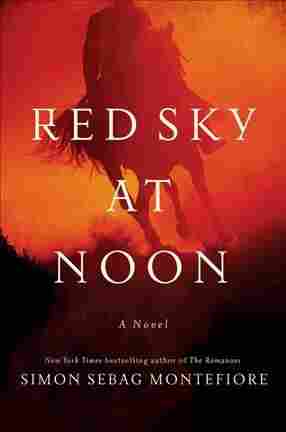 Benya Golden is a Jewish Cossack. Which is not the setup for a Mel Brooks movie, but the new novel Red Sky at Noon by Simon Sebag Montefiore. Golden is a prisoner in a Soviet gulag during World War II, and he ends up pressed into a kind of Dirty Dozen battalion of horse-riding Cossacks and convicts who detest Stalin — but revile the Nazis even more.

During 10 eventful, violent and wrenching days, this passionate lover of freedom also finds time to romance a beautiful Italian nurse. Meanwhile in the Kremlin, Stalin frets over the invasion of Mother Russia, the seige of the city that bears his name, and the romantic entanglements of his beloved daughter, Svetlana.

"My name is nothing, my surname is nobody," says Golden — a phrase which Montefiore describes as almost the mantra of gulag prisoners. "Because in the camps, the politicals — as they were called, and Benya Golden was one of those, the less of a past they had, the less people could destroy them."

On why Benya loves being a Cossack

Well, the Cossacks of course were the horsemen of the frontiers of Tsarist Russia, who were often escaped serfs or peasants. And they became the enforcers of the Tsarist regime, the Romanovs. But after the Bolsheviks came to power, the Cossacks — who had been the most anti-Semitic and brutal supporters of the Romanovs, some of them fought for the Bolsheviks, and they were known as the Red Cossacks.

On Benya's most important love ... his horse

... suddenly it occurred to me when I was reading, studying about this war in the grasslands of Russia, how similar it was, and in some ways this is a Western on the Eastern Front.

Silver Socks is the one person he can trust, you know, he's in this penal battalion, and this is the story of these punishment battalions that Stalin set up. And they were full of criminals, mainly kind of vicious gangsters, murderers and Cossacks who'd served time in the gulags and in prisons. And they were told if they fought hard and obeyed all orders, they could achieve redemption, if they shed blood for the motherland. Now oftentimes, the only way they could shed blood was being killed, and Stalin knew that, and so this was a sort of battalion of the damned, if you like ... and in cavalry, if you read about cavalry war, there's a great respect for the horse, because the horse is the difference between life and death in battle, and they all know that.

On the cavalry war between Germany and the Soviet Union

In 1942, the Germans were running out of fuel. They were advancing so fast across the grasslands, the hot grasslands of south Russia, and the Russians were running out of tanks. And so both of them turned to cavalry, and there were great cavalry battles on the grasslands. Of course, when I read about this — I'm an enormous fan of American literature, and especially the great novels of Larry McMurtry, Lonesome Dove, Cormac McCarthy, Elmore Leonard ... and suddenly it occurred to me when I was reading, studying about this war in the grasslands of Russia, how similar it was, and in some ways this is a Western on the Eastern Front. And it's an exciting and desperate ride for survival that these people had to take.