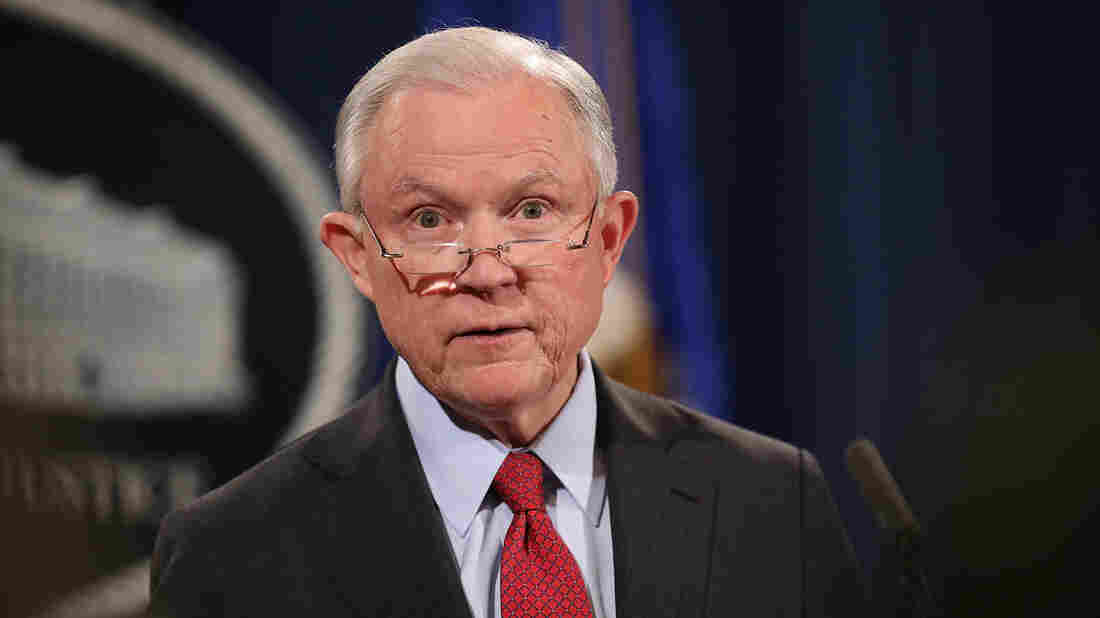 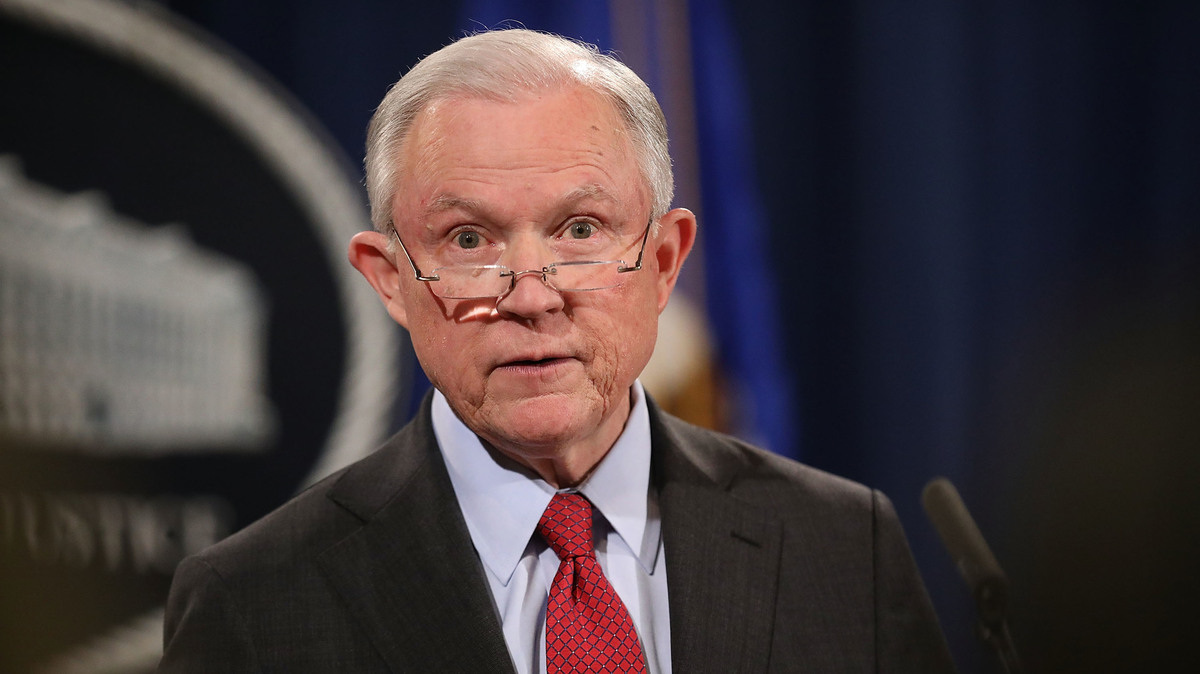 Attorney General Jeff Sessions holds a news conference at the Department of Justice on December 15, 2017, in Washington, D.C.

This week in the Russia investigations: Big problems for Sessions, Bannon cut adrift and Republicans search for more weapons to fire.

Living on the edge

A lighthouse can stand safely on a barrier island one morning and then when a big storm blows through, be teetering at land's end by the next.

Following the heavy cyclone of news this week, dawn in Washington, D.C., on Saturday found Attorney General Jeff Sessions on the slippery sand — and that could also mean peril for Justice Department special counsel Robert Mueller.

An explosive New York Times scoop revealed that Sessions tried to smear then-FBI Director James Comey before he was fired. The report, by Michael Schmidt, also said President Trump ordered White House counsel Don McGahn to lean on Sessions not to recuse himself from the Russia probe, and when Sessions did recuse, the president fustigated him. Sessions offered to quit but Trump said no.

So not only is Sessions persona non grata with the president — that's been the case for months. Now the public and people inside the Justice Department know Sessions was actively trying to undermine his own FBI director, as part of a pattern of conduct directed by Trump — who himself had asked Comey to lay off then-national security adviser Mike Flynn, then fired Comey, etc.

All this could make life very uncomfortable for Sessions inside DOJ and with the FBI. A small but vocal coterie of House Republicans has already been calling for Sessions' head. (They have no vote but they do keep the anti-Sessions drumbeat going inside the conservative sphere.)

Plus Trump did not invite Sessions to a retreat he's holding over the weekend at Camp David. Plus EPA Administrator Scott Pruitt felt comfortable enough with this state of play to wink and nod to Politico about how he'd be interested in becoming attorney general ... if the job were open.

What does it all mean? Sessions has been in hot water before with Trump but came through it, in part thanks to steadfast support from his longtime allies in the Senate. How strong is that firewall now? Judiciary Committee Chairman Chuck Grassley, R-Iowa, has said he had no plans to confirm a new attorney general. And Sen. Cory Gardner, R-Colo., has threatened to hold up all Justice Department nominees after Sessions rescinded earlier permissive guidelines on marijuana enforcement.

So if Sessions were to go for real this time, Trump might not be able to quickly and easily appoint someone else — someone not recused from the Russia probe — to wrangle the Justice Department on the president's behalf. But if the political dynamics change, that could change the play for the White House. As NPR's Carrie Johnson has reported, replacing the leadership at Justice is one way that Trump could try to control or get rid of Mueller.

The Russia imbroglio essentially boils down to two big questions: Did people in Donald Trump's campaign conspire with the Russians who attacked the 2016 presidential election? And did Trump and his aides break the law in trying to constrain the investigation into the first question?

This week brought huge developments in both threads of the story, including the news on obstruction above. That would be a lot of news in a normal week, but this was not a normal week. Separately, there was a huge development in the collusion/conspiracy thread as well: Donald Trump Jr. may have introduced his father, the then-candidate, to the Russian delegation that Trump Jr. and other aides hosted in New York in June 2016.

Trump Jr. hosted a delegation of Russians at Trump Tower following messages that described an offer of help for Trump's campaign by the Russian government. Trump Jr. and others who attended have downplayed the importance of that meeting, but Steve Bannon suggests in the ubiquitous and explosive new book by Michael Wolff that it ended with an encounter between the Russians and the candidate:

"The chance that Don Jr did not walk [them] up to his father's office on the twenty-sixth floor is zero," as the book quotes Bannon.

Comments like that, as well as other remarks about the Russia imbroglio and other matters, brought about a historic break this week between the White House and Bannon. Imagine George W. Bush casting Karl Rove into the darkness or Barack Obama dropping David Axelrod into the Potomac — that's the magnitude of the schism.

What does it all mean? The political fireworks obscured the substance of Bannon's comments: Trump Jr. and Trump son-in-law Jared Kushner may have known they were being "treasonous," per Bannon, and the Family Trump, including Kushner and his wife, Trump's daughter Ivanka, are presumably terrified of what Mueller might uncover about their finances.

The point about the in-person meeting is arguably the most significant. Trump goes back and forth about whether or not he accepts that Russia attacked the 2016 election. But he has always been consistent that neither he nor anyone in his orbit colluded with the Russians who were doing the attacking.

Critics on the outside have suspected all along that Trump had to be aware at least of the overtures that aides were getting from Russians — whether he was briefed by Trump Jr. or Sessions or another campaign official such as Sam Clovis. If Trump met himself with attorney Natalia Veselnitskaya and lobbyist Rinat Akhmetshin, that is obviously significant.

All this assumes Bannon's statements are accurate. Are they? Or is all this just empty talk? That's what White House press secretary Sarah Huckabee Sanders said — she slammed the falsehoods she said filled the Wolff book and specifically denied the account about a potential in-person meeting with Trump. Wolff told NPR's All Things Considered Friday that he spent about three hours in total with Trump during the campaign and after his inauguration, contradicting Trump's assertion Thursday on Twitter that "I never spoke to him for book."

Bannon hadn't joined the campaign at the time of the Russian visit; the campaign's chairman then was Paul Manafort, who also attended the Trump Tower meeting. How could Bannon know what took place? Trump and the White House feel strongly enough about it that they not only have set Bannon adrift, they have threatened to sue Wolff's publisher in an effort to stop the book from being released.

But the bell cannot be un-rung. The book was published Friday and is a best-seller on Amazon.com.

Trump and his allies are not taking all this lying down. Republicans have intensified a multi-axis offensive against the Justice Department and the FBI and also are using them to try to surface more material for that effort. 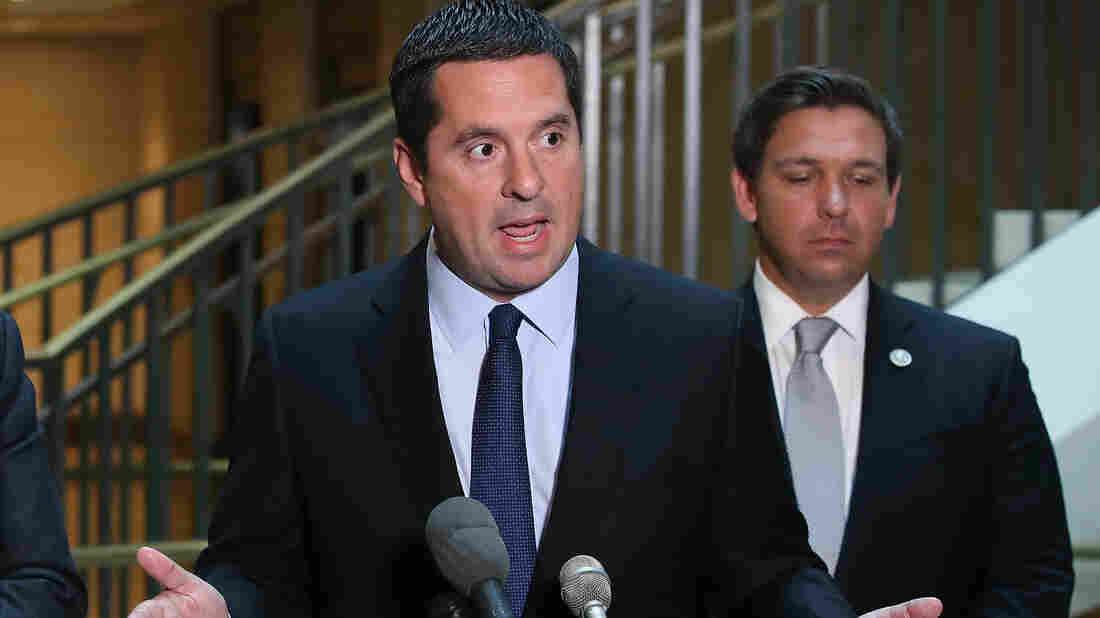 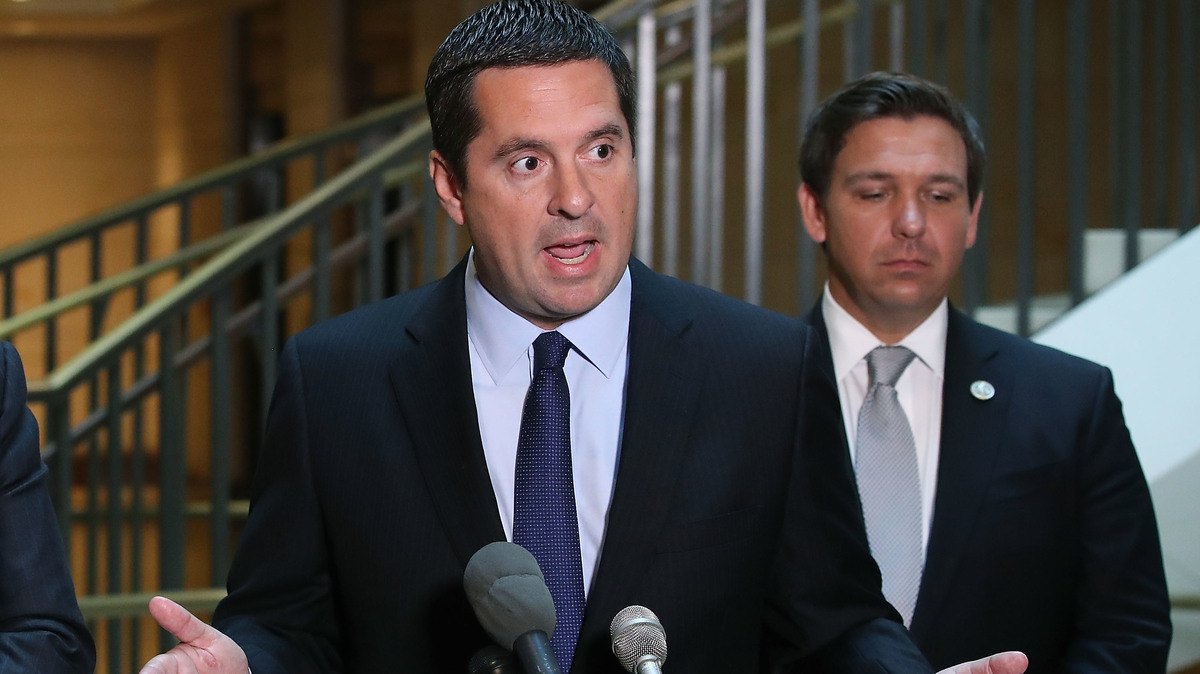 House Intelligence Committee Chairman Rep. Devin Nunes, R-Calif., speaks while flanked by and Rep. Don DeSantis, R-Fla., as he announces that his committee and the House Oversight Committee.

Item: House Speaker Paul Ryan, R-Wis., reportedly sided with House Intelligence Committee Chairman Devin Nunes, R-Calif., in a showdown with Deputy Attorney General Rod Rosenstein over more material involving a senior FBI agent who was removed from the Russia investigation after the discovery of text messages that criticized Trump during the 2016 campaign.

Republicans say the feds and DOJ are biased and they want more material that will help them make that case; Nunes threatened to hold Rosenstein in contempt of Congress unless he coughed it up. Rosenstein and FBI Director Christopher Wray asked Ryan for a meeting to try to head off a confrontation. But Ryan said nope, give Nunes what he wants.

The Justice Department may circulate the material itself, as it did with the last batch of these text messages, or members of Congress may be the conduit by which it gets into the bloodstream.

Item: FBI agents based in Little Rock, Ark., have reportedly revivified a dormant investigation into the Clinton Foundation. They're looking for evidence of shady pay-to-play-type activities from when Hillary Clinton was secretary of state, as the Washington Post reported.

Item: Senate Judiciary Committee Chairman Chuck Grassley, R-Iowa, and the chairman of Judiciary's Crime and Terrorism Subcommittee, Lindsey Graham, R-S.C., have made a "criminal referral" to the Justice Department about Christopher Steele, the British ex-intelligence officer who compiled the infamous Trump-Russia dossier. They allege Steele has made "false statements" that warrant a formal inquiry.

What does it all mean? There's no guarantee — as the Post and other outlets reported — that the FBI investigation in Arkansas or the "referral" by Grassley and Graham will result in any action, let alone criminal charges. But the press reports yield more oxygen for Republicans who say this whole saga ought to be about bias, abuse of power and the Clintons, enabling them to keep alive that counter-narrative in this never-ending saga.