Accessibility links
President Trump 'So Happy' Black Unemployment Rate At A Historic Low Trump boasted about unemployment for African-Americans hitting a record low of 6.8 percent in December, the lowest rate for that group since the government began tracking data in the early 1970s. 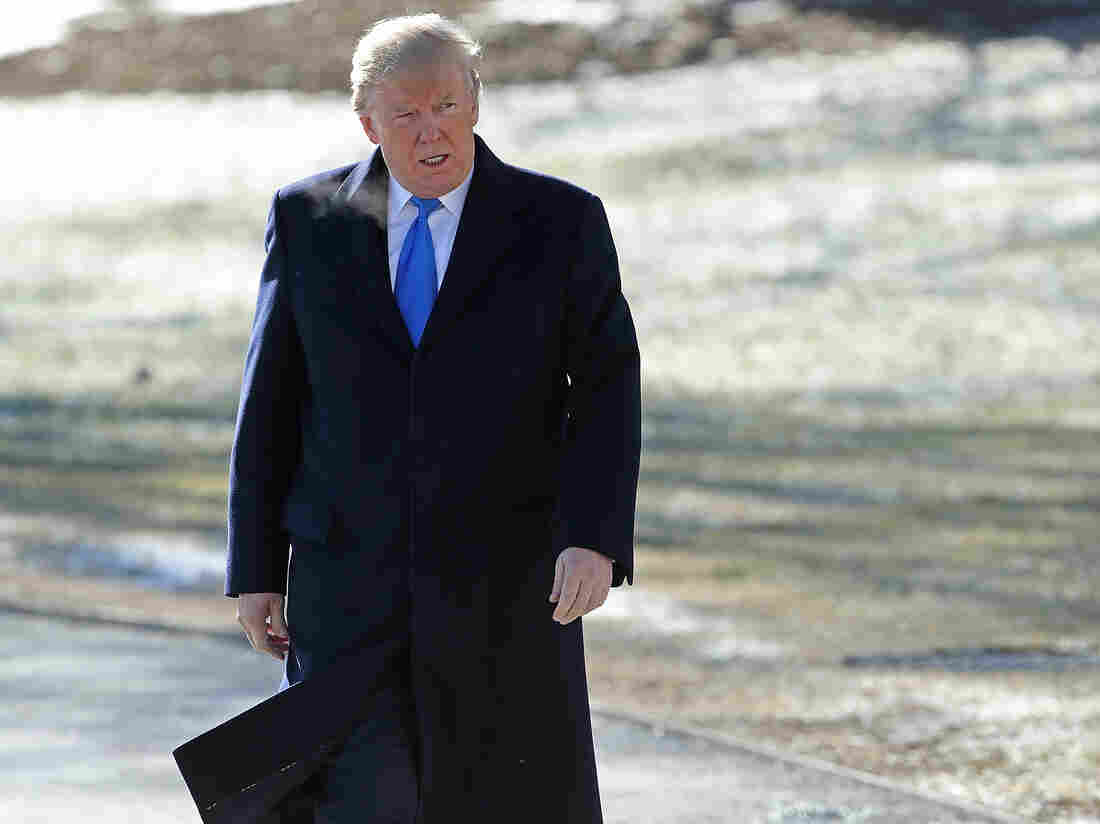 President Trump walks from the Oval Office to speak with members of the press just before departing the White House to spend the weekend Camp David. Win McNamee/Getty Images hide caption 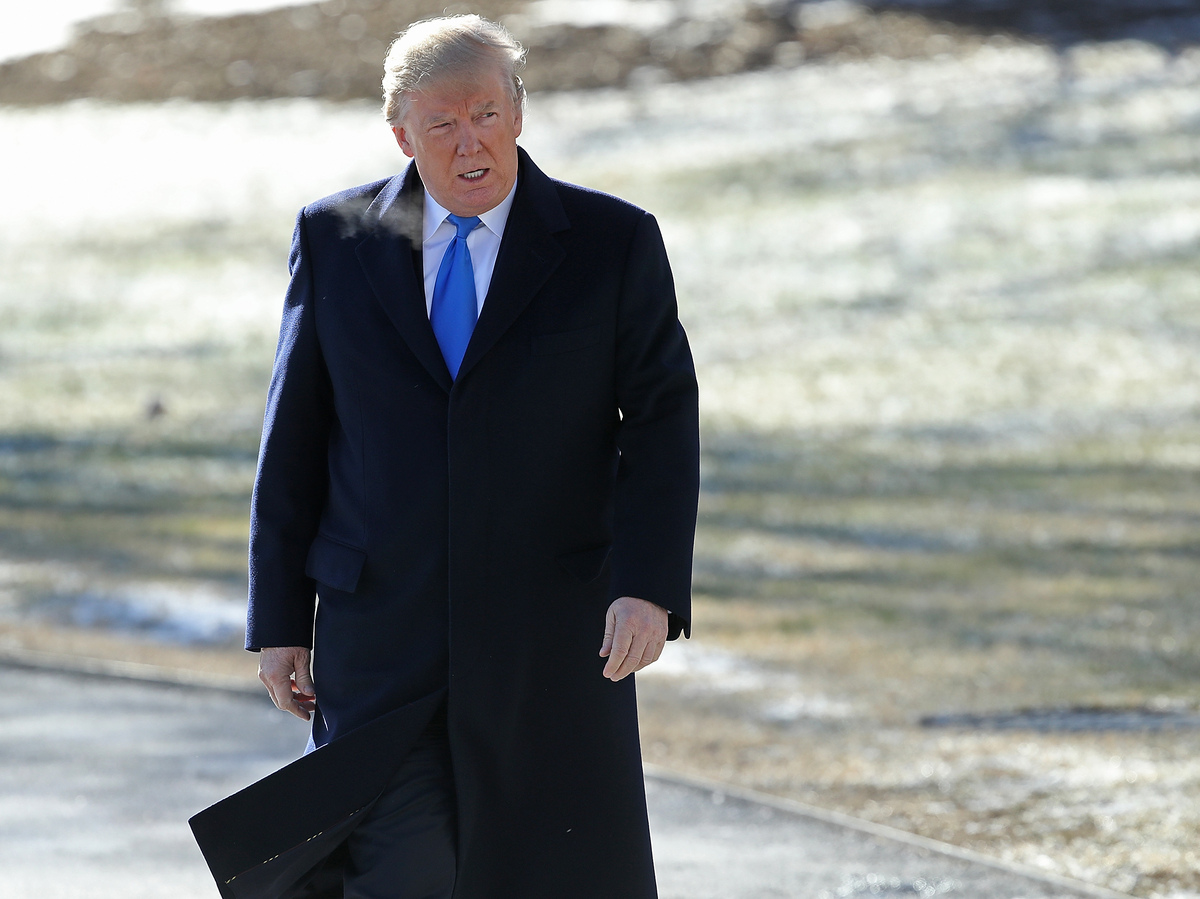 President Trump walks from the Oval Office to speak with members of the press just before departing the White House to spend the weekend Camp David.

President Trump took to Twitter on Saturday to highlight the historic drop in the unemployment rate among African-Americans, a day after the Bureau of Labor Statistics announced that the rate fell below 7 percent for the month of December — the lowest mark for black Americans since the bureau began tracking the data in the early 1970s.

"The African American unemployment rate fell to 6.8%, the lowest rate in 45 years. I am so happy about this News! And, in the Washington Post (of all places), headline states, 'Trumps first year jobs numbers were very, very good.' "

The African American unemployment rate fell to 6.8%, the lowest rate in 45 years. I am so happy about this News! And, in the Washington Post (of all places), headline states, “Trumps first year jobs numbers were very, very good.”

The celebratory tweet was sent Saturday morning ahead of meetings with congressional Republican leadership and members of his Cabinet at the presidential retreat Camp David, where a legislative strategy for 2018 is expected to be mapped out.

It also came in the midst of a tweetstorm in which the president gave a lengthy defense of his mental stability, referring to himself as "really smart," a "successful businessman" and "a very stable genius."

According to the latest BLS report released Friday, the black unemployment rate has been in decline since at least October 2017. In March, the unemployment rate for African-Americans 16 or older was above 8 percent, but by September, it fell to 7 percent. In December 2017, the rate hit the new low of 6.8 percent. 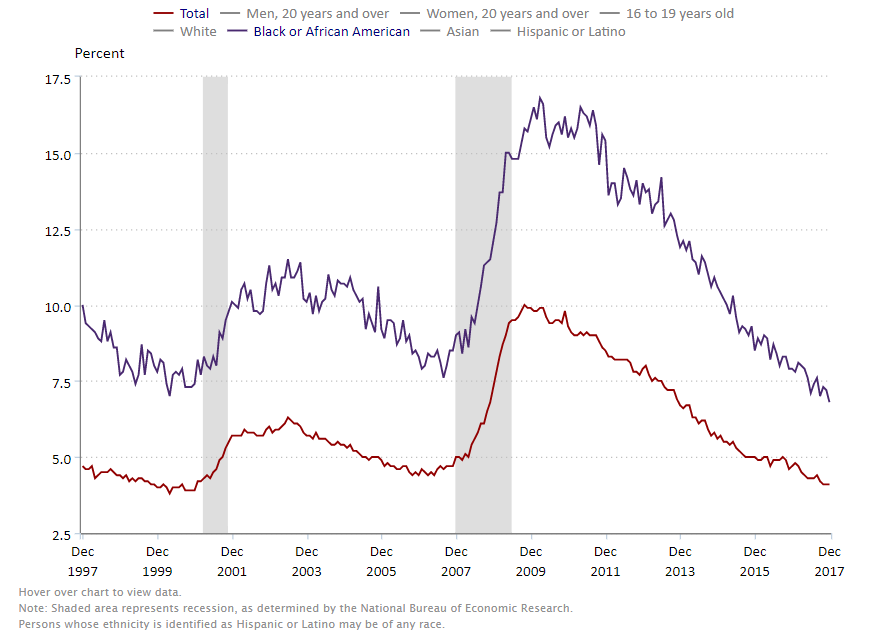 By comparison, unemployment for whites in the month of December was 3.7 percent.

As NPR reported Friday, the unemployment rate overall was 4.1 percent, unchanged from November, and the economy added 148,000 jobs last month.

During his campaign, Trump ran as a jobs creator — for all Americans.

Kay Coles James, the new president of the conservative Heritage Foundation who is African-American, tweeted that there is more work to be done but added, "what a great way to start the new year!"

Great news for African Americans – unemployment rate is the lowest EVER.

We have more work to do—but what a great way to start the new year!

The president's Council of Economic Advisers said Friday that the "economy's engine" was responsible for benefits being felt across the board, adding:

"The overall unemployment rate, which by October had dropped to 4.1 percent, represented a 17-year low by year's end. The benefits of the low rates were felt broadly, resulting in unemployment rates for America's veterans, African-Americans and Hispanics that reached historic lows in 2017."

White House deputy press secretary Raj Shah went further and praised the president's policies for having a direct correlation to the new low in black unemployment. He tweeted:

"The lowest in nearly 5 decades and a credit to @POTUS economic policies!!"

The record low unemployment rate for African-Americans comes after a year of strained relations between Trump, his administration and many in the black community including the lawmakers on Capitol Hill who represent its interests, specifically the Congressional Black Caucus.

During the first year of his presidency, Trump used the bully pulpit to wade into a number of controversies that some felt were racially charged. Two of the most prominent incidents include referring to NFL players protesting racial injustice during the national anthem as "sons of b******" and blaming "both sides" for violence in Charlottesville, Va., where a white supremacist protest over the removal of a statue of Confederate Gen. Robert E. Lee turned deadly.

In early December, Trump's attendance at the opening of a state-sponsored civil rights museum in Mississippi caused controversy, including a highly publicized decision by Rep. John Lewis, D-Ga., not to attend the event because Trump would be there. Lewis was a young activist during many of the key moments of the civil rights movement more than a half-century ago, making him an icon of the movement in his own right.

Also, last month, in a closely watched special election in Alabama, African-Americans, including an eye-popping 98 percent of black women, delivered a stinging defeat to the president when they helped elect Democrat Doug Jones to the U.S. Senate over Trump's preferred candidate, Republican Roy Moore. Jones was sworn in this week and became the first Democratic senator to represent Alabama in decades.

After the highly publicized departure of White House staffer Omarosa Manigult Newman, who is black, last month, there were renewed questions about the lack of diversity in Trump's inner circle.

According to recent data from the Pew Research Center, only 10 percent of African-Americans approve of Trump's job performance.