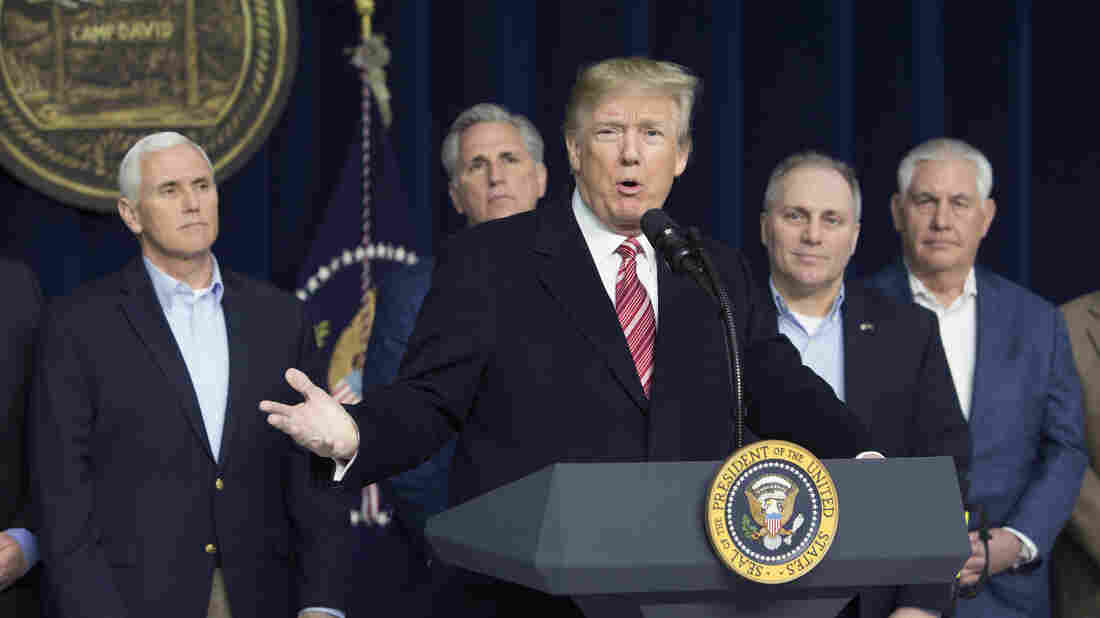 President Donald Trump speaks to the press after holding meetings at Camp David Saturday. Trump met with staff, members of his Cabinet and Republican members of Congress to discuss the Republican legislative agenda for 2018. Pool/Getty Images hide caption 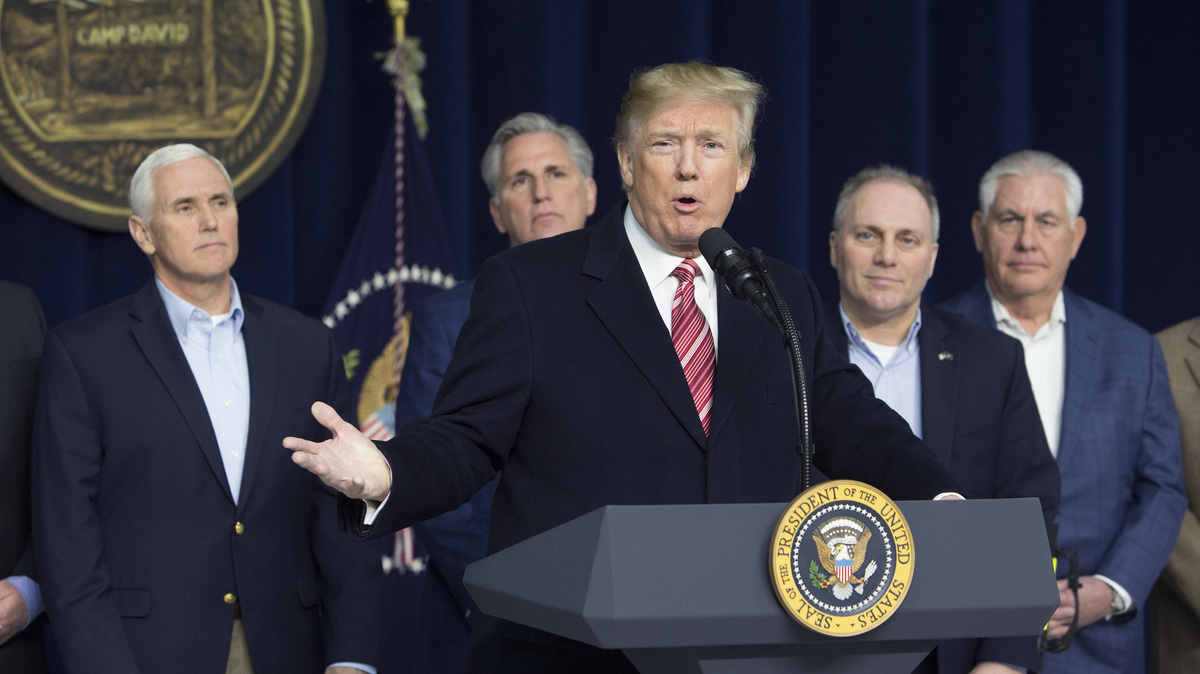 President Donald Trump speaks to the press after holding meetings at Camp David Saturday. Trump met with staff, members of his Cabinet and Republican members of Congress to discuss the Republican legislative agenda for 2018.

Flanked by congressional Republican leadership and some members of his Cabinet at Camp David Saturday, President Trump vowed to be "very involved" in midterm elections later this year and said he had some "incredible meetings" with Republicans as the party charts its legislative course for 2018.

In a wide-ranging press conference, Trump touched on his hopes for passing bipartisan legislation to overhaul the nation's immigration laws and national welfare programs, repeated claims his campaign did not collude with the Russians who attacked the 2016 presidential election and signaled a willingness to start a dialogue with North Korea, just a week after its leader announced there's a button to launch a nuclear attack sitting on his desk.

On immigration, Trump said Republicans are going to have to work out an arrangement with Democrats on the Obama-area program Deferred Action for Childhood Arrivals (DACA).

When pressed for specifics about what he wanted to see in an immigration bill, he suggested that items he wanted would have to be tied to a legislative fix for DACA, which protects roughly 700,000 people brought to the U.S. illegally as children.

The "lottery system" refers to the Diversity Visa Lottery program, that NPR reported in November lets around 50,000 immigrants into the U.S. each year. A man from Uzbekistan used that program to enter the country and he is accused using a truck to plow into a pedestrian and bicycle path in New York City killing eight people in October. "Chain migration" refers to an existing part of the national immigration system based on family connections that allows immigrants already settled in the United States to seek to have relatives move to the U.S. to join them.

President Trump also called for more border security and more funding related to border security. And he reiterated a campaign promise that Mexico will pay for the border wall "in some form," a day after reports from the Washington Post and the New York Times that his administration is seeking $18 billion in funding from Congress for the first phase of a wall and other improvements on the U.S.-Mexico border.

On the topic of a welfare overhaul — something Trump said for Republicans was "very dear to our heart" — he said again he'd seek help from Democrats.

That comment echoes recent comments by Senate Majority Leader Mitch McConnell, R-Ky. Just before Congress left for the holidays late last year, McConnell suggested in an interview with NPR, that in order for 2018 to be a productive year, the GOP may have to move on from changes to things like changes to the federal welfare programs and repealing the Affordable Care Act, unless Democrats in the Senate were willing to work with Republicans on those issues.

When it came to North Korea, the president spoke about the thawing of relations between North and South Korea. Next week, the two nations are set to revive talks for the first time in two years.

"I hope it works out. I very much want to see it work out between the two countries," Trump said.

South Korea hosts the Winter Olympics in Pyeongchang next month and Trump said he was "100 percent" behind North Korea sending athletes to the games.

Trump was also asked if he was open to having a phone conversation with North Korea's Kim Jong Un. Earlier this week, Trump got into a war of words on Twitter with the North Korean leader over who has the bigger nuclear button.

"Sure I always believe in talking," Trump said Saturday, adding later, "absolutely I would do that, no problem with that at all."

The president was pressed by a journalist about whether he would require any prerequisites from Kim before having a phone conversation.

Trump pushed back and said: "It's not what I said, at all."

The president also said of Kim:

On the FBI investigation looking into contacts between Russian operatives and the Trump campaign, the president was asked whether he had White House counsel Donald McGahn urge Attorney General Jeff Sessions not to recuse himself in the Russia investigation, as reported by the New York Times.

Trump scoffed at the question, saying, "The story by the way in the Times was way off. Or at least off. But everything I've done is 100 percent proper. That's what I do is I do things proper."

The president added: "There's been no collusion between us and the Russians" but said there was collusion between Hillary Clinton's campaign, the Democratic National Committee and the Russians, but didn't provide any proof of these assertions. Trump's claims about Clinton and the DNC come after recent reports that the FBI in Arkansas is investigating the Clinton Foundation after a steady drumbeat of claims by Trump and Republicans about the 2010 sale of a mining company to Russia.

The president was joined at Saturday's press conference by Republican congressional leaders from both the House and the Senate, some members of his Cabinet and Vice President Pence.

After touting many items on conservatives' wish list that have been checked off by the White House and the GOP-controlled Congress in Trump's first year in office, McConnell said Saturday that 2017 "was an astonishing year. But it's time to look forward" to 2018.

"We have big things to do for the American people," House Speaker Paul Ryan, R-Wis., said Saturday. Ryan added: "And what we want to work on in 2018 is making sure that everyone enjoys the economic growth that's to come."