Accessibility links
President Trump Called For Roy Cohn, But Roy Cohn Was Gone Some say Cohn was Trump's mentor, or even his surrogate father. This much is clear: Cohn was Trump's model in the handling of public relationships and media warfare. 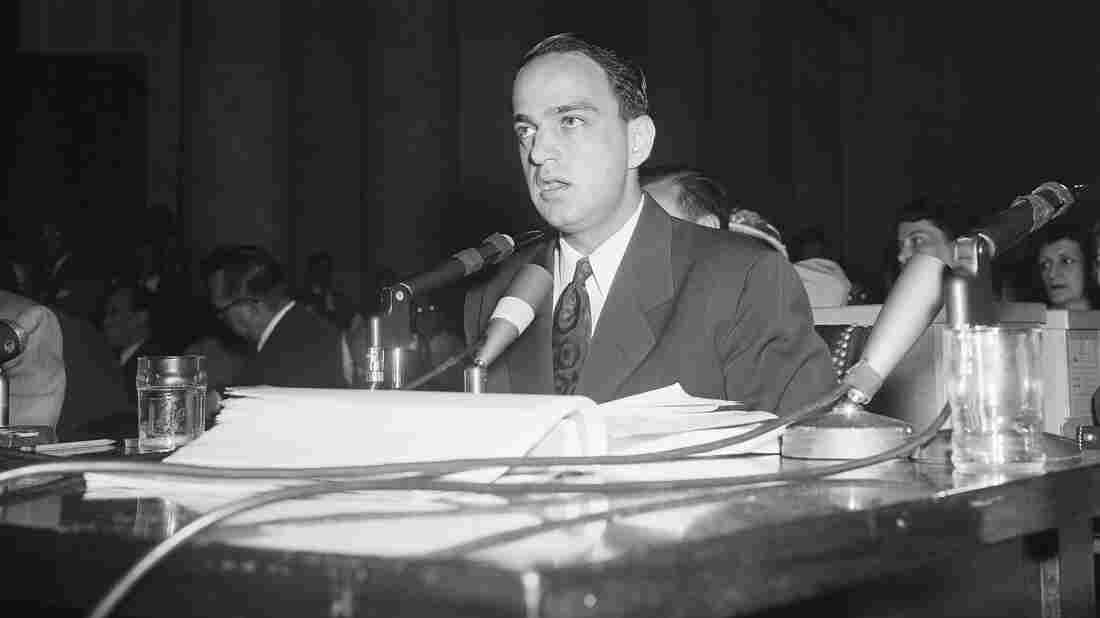 Winding up his testimony before a Senate subcommittee, Roy Cohn makes a speech of praise for Sen. Joseph McCarthy, R-Wis., on June 15, 1954. Henry Griffin/AP hide caption 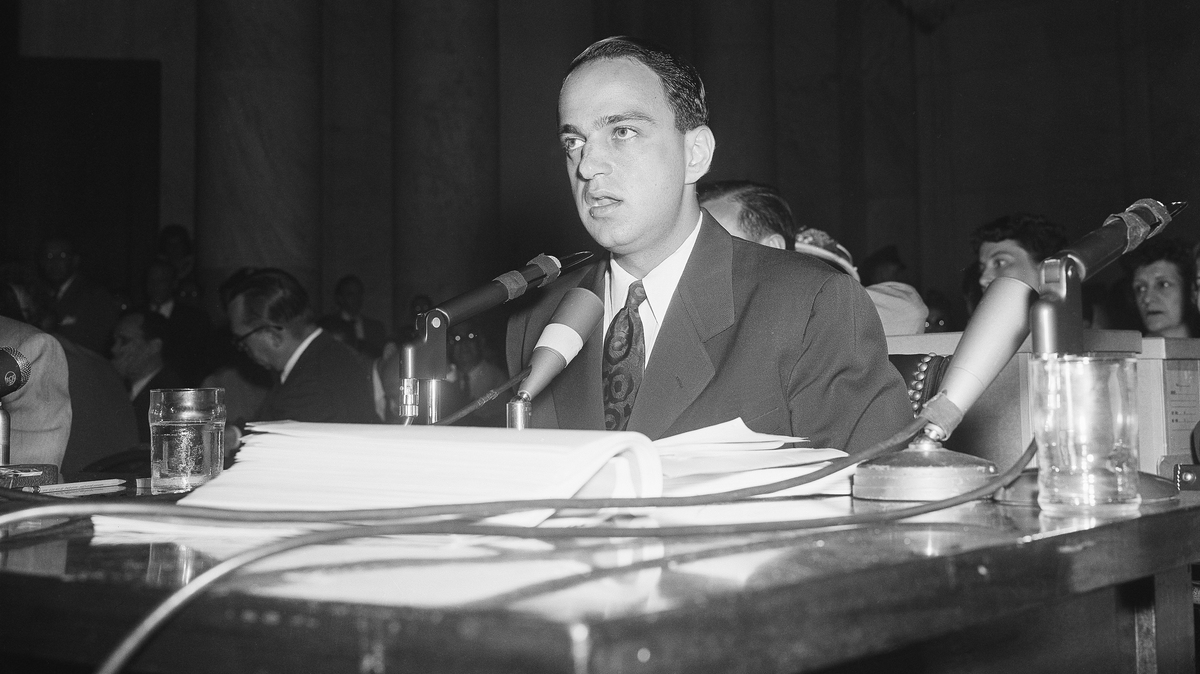 Winding up his testimony before a Senate subcommittee, Roy Cohn makes a speech of praise for Sen. Joseph McCarthy, R-Wis., on June 15, 1954.

This past week brought a series of stunning reports about President Trump and his White House, reports some Americans found hard to believe. But one quote attributed to the president should have surprised no one: the one in The New York Times where the president asked, "Where's my Roy Cohn?"

In a moment of crisis, the president cried out for the man from Trump's past whom the Times described as his "personal lawyer and fixer." Far more than that, Cohn was a legendary and controversial attorney who pushed legal tactics to the limits for a dazzling array of clients — from senators to mobsters and high rollers in sports and entertainment.

Cohn was periodically in legal trouble himself and was disbarred in New York just weeks before he died in 1986. But his legacy lives on in the careers of others.

Trump met him in 1973 in a Manhattan nightclub. The two became friends, allies, business associates. Some say Cohn was Trump's mentor, or even his surrogate father. This much is clear: Cohn was Trump's model in the handling of public relationships and media warfare.

Cohn's code was built on self-interest and loyalty; his style was all about intensity. If he was your lawyer, he was prepared to do anything for you; if he was your adversary, no holds were barred.

Melania Trump said during the campaign that "when you attack Donald, he will punch back 10 times harder." That was Cohn's modus operandi for many years before he taught it to Trump.

It isn't hard to see Cohn's tactics in Trump's business and TV careers, if not in his campaign for president. Neither is it hard to understand why, as president, when Trump felt he needed help, he called out, "Where's my Roy Cohn?"

He may have missed Cohn many times in those early weeks, but the blockbuster story in the Times (by Michael S. Schmidt) focused on a specific point in March 2017. Trump had been in office less than two months, and while struggling to grasp the reins of the federal government, he was also trying to limit fallout from reports of Russian interference in the 2016 presidential election.

In January, the U.S. intelligence community had confirmed stories of extensive Russian efforts to intrude in various aspects of the campaign. Ugly suspicions had been aroused because the Russian efforts were substantially directed against Trump's Democratic opponent, Hillary Clinton.

In February, Trump's national security adviser, Michael Flynn, was forced out of the administration following revelations about contacts and relationships he had with various Russians. He had apparently lied about these contacts to the vice president, among others.

The FBI was looking into all this, so the president sat down with James Comey, then the director of the FBI. According to Comey, the president twice asked if he had Comey's loyalty. The president did not get the answer he wanted. Comey would not be the president's Roy Cohn. (Trump has denied that he ever asked Comey to pledge his loyalty.)

Comey would eventually be fired, but in March of last year Trump was still dealing with other issues of loyalty. He was frustrated by Attorney General Jeff Sessions' decision to recuse himself from any role in the Justice Department Russia investigation. The FBI is part of the Justice Department, and Trump may well have thought Sessions could help him contain the DOJ probe.

Trump had named Sessions, who had been a senator from Alabama, to be the nation's top lawyer, perhaps believing that meant Sessions would be his top lawyer. On one hand, the job was a reward for Sessions' lonely months as the only senator backing Trump's candidacy in 2015 and early 2016. But it was also an indication that the president assumed he had every last iota of Sessions' loyalty.

Sessions, however, had a particular problem in that he himself had omitted contacts he had with the Russian ambassador when he was asked about Russian contacts in his confirmation hearings. Moreover, as a former official of the Trump campaign, he could not oversee a probe of that campaign under Justice Department rules.

So Sessions saw himself with little choice but to recuse himself under Justice Department rules.

First Comey, then Sessions. Trump was incensed. That was when he asked, whether rhetorically or in earnest: "Where's my Roy Cohn?"

The clear implication was that Cohn, the advocate who stopped at nothing, would never have cowered before a few departmental rules or procedural niceties. It seems Trump did not understand why Comey and Sessions could not be more like Cohn. 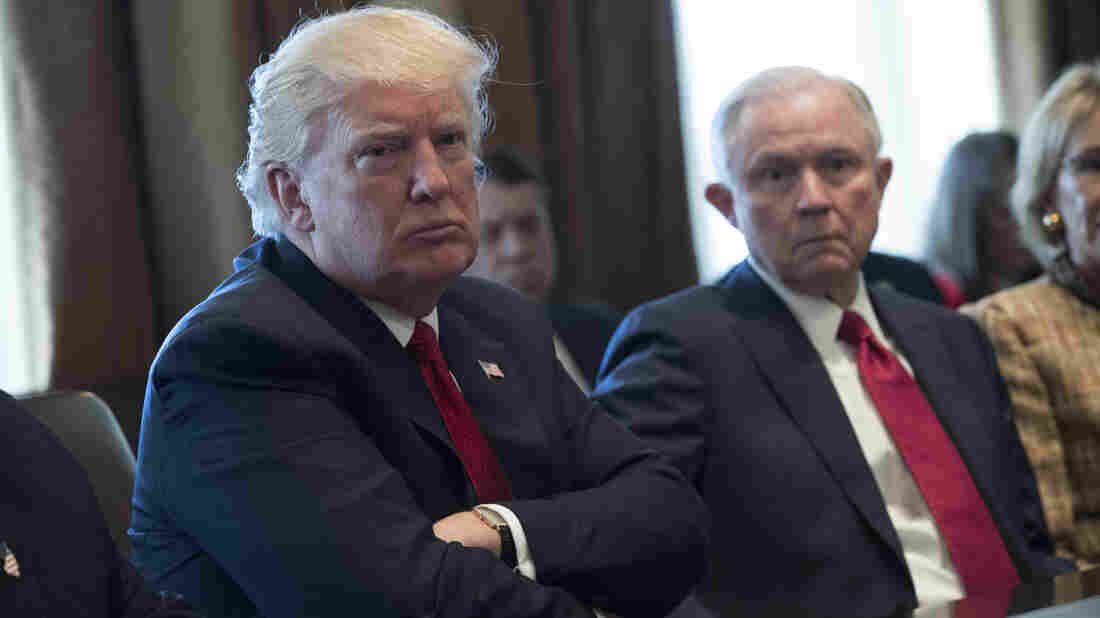 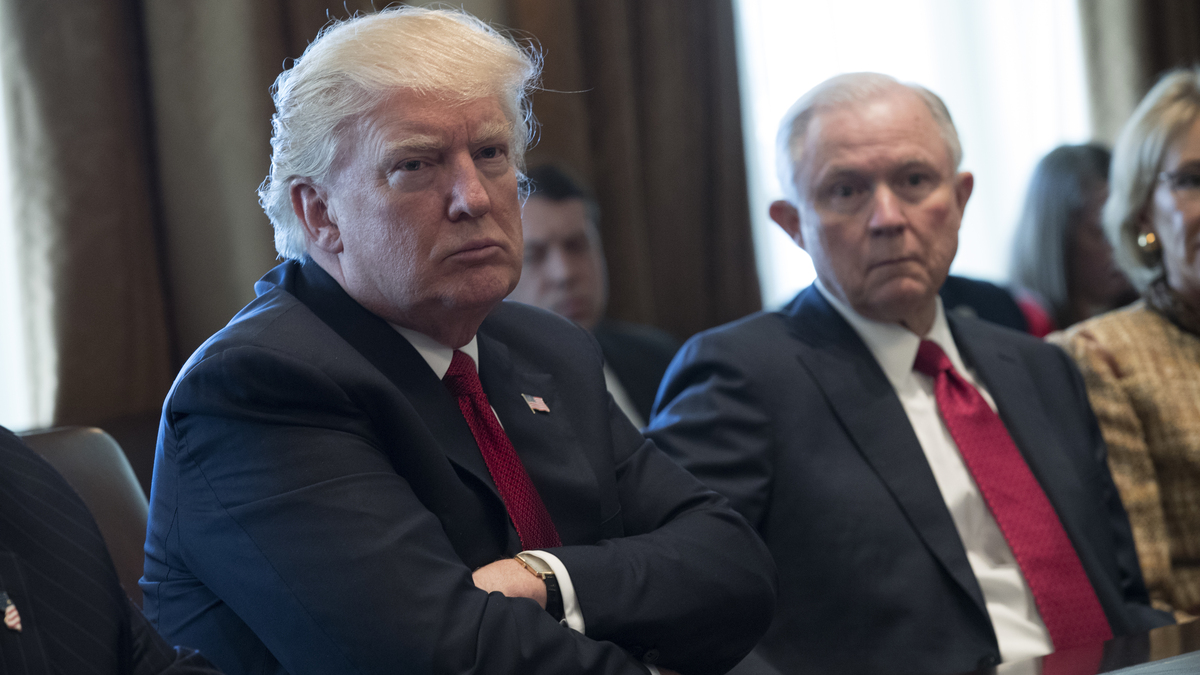 President Trump and Attorney General Jeff Sessions attend a panel discussion on opioid and other drug abuse at the White House on March 29, 2017.

Roy Cohn was born in New York City in 1927, the year Babe Ruth hit 60 home runs for the Yankees. He was educated in some of the city's finest private schools, including Fieldston and Columbia University, the latter giving him a bachelor's and a law degree by the time he was 20.

Four years later, Cohn was a Justice Department lawyer helping to prosecute the nuclear secrets espionage case against Ethel and Julius Rosenberg. That 1951 trial resulted in the Rosenbergs' conviction and execution. Cohn also won convictions against several other defendants accused of having communist connections.

That led J. Edgar Hoover, then the director of the FBI, to recommend the young Cohn to a senator planning a series of investigative hearings to root out communists in the federal bureaucracy. The senator was Joseph R. McCarthy, a Republican from Wisconsin, and his hearings would dominate the national news for several years — often because of Cohn's research or interrogation of witnesses.

Cohn was still at McCarthy's side when the senator overreached in a series of 1954 probes of U.S. Army figures. The collapse of those hearings led to McCarthy's censure by the full Senate later that year, after which his career declined rapidly. Cohn, however, emerged unscathed, resigning from the senator's staff and returning to New York to take up private practice.

In that pursuit, Cohn was impressively successful on behalf of his celebrity clients. These included the Roman Catholic Cardinal Francis Spellman, shipping magnate Aristotle Onassis and Yankees owner George Steinbrenner. They also included political figures in both parties and organized crime bosses such as Carmine Galante and John Gotti.

But Cohn was also quite the man about town, seen often in fashionable nightclubs of the period. One was Le Club, where he first met Donald Trump in 1973. Regarded as handsome and brash, the 27-year-old from Queens was intent on making his mark in Manhattan. Later that year, Cohn defended Trump and Trump's father against federal charges that they had systematically excluded blacks and Hispanics from their housing projects. (They eventually settled the case with no admission of guilt.)

Cohn was known for pushing aggressive tactics to the limits and beyond, especially for filing lawsuits and countersuits to bully his adversaries. In the last two decades of his career, he was investigated by federal authorities for perjury and witness tampering, among other charges. In 1986, a panel of the New York State Supreme Court's Appellate Division disbarred Cohn for unethical and unprofessional conduct.

At that time, Cohn had already been diagnosed with AIDS, and later that same year he would die of complications of that disease (although he always insisted in public that his ailment was liver cancer). For this reason, a younger generation of Americans first encountered Cohn's name in a theatrical context. The last phase of his life is portrayed in Tony Kushner's 1993 Pulitzer Prize-winning play, Angels in America: A Gay Fantasia on National Themes.

Cohn probably never thought that the young man from Queens he met at Le Club would become the most famous of all his clients, the one who made him newsworthy even into the 21st century.

Since Cohn, Trump has had many lawyers, defending him when targeted and filing endless lawsuits targeting his enemies. But none to take the place of his mentor.

Now, as president, Trump theoretically has thousands of lawyers in his employ. But he does not have their loyalty, at least not in the sense he craves.

And that is why he will continue to wonder: Where is his Roy Cohn?