Accessibility links
Congress To Take Up DACA, Border Wall As It Advances On 2018 Agenda President Trump met with congressional GOP leaders over the weekend to plan out their 2018 agenda. But a deal on immigration and funding the government must come first. 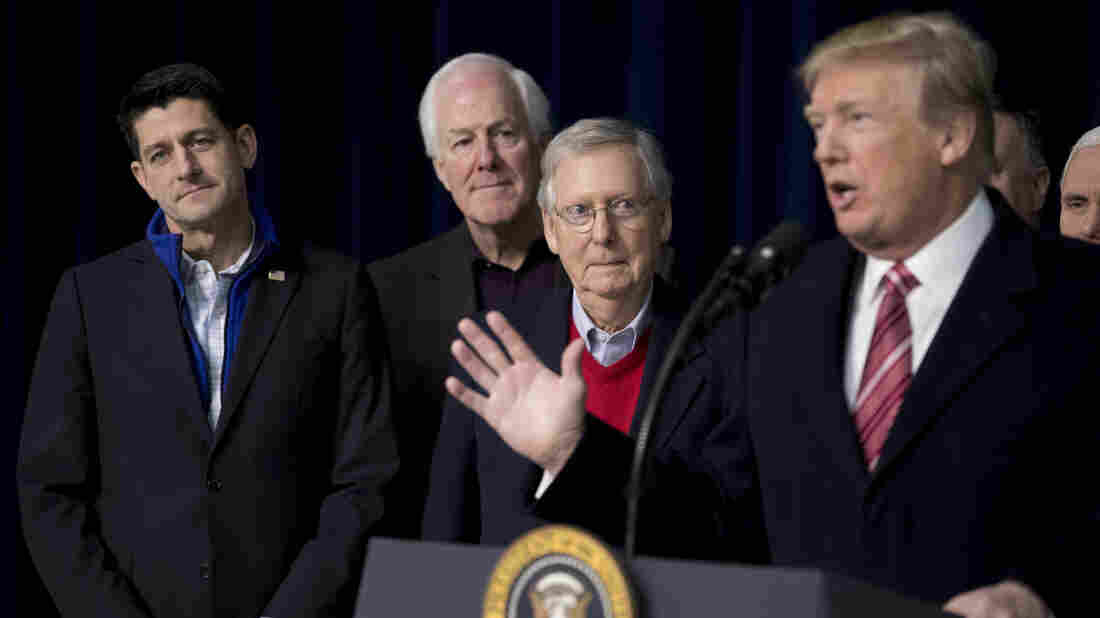 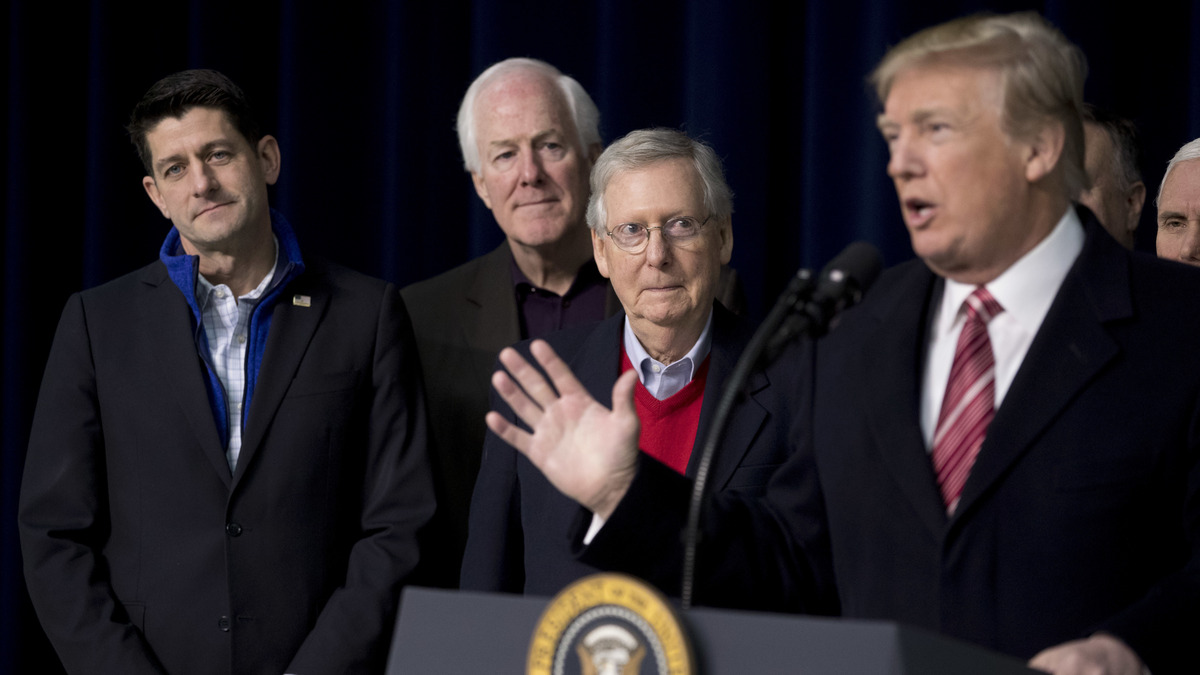 It may be a new year, but Congress plans to spend most of January wrapping up old business left over from 2017.

Congressional leaders are promising to head off any chance of a government shutdown well before the Jan. 19 deadline, but a nearly yearlong fight over President Trump's demands to build a wall along the U.S.-Mexico border could threaten those plans.

Democrats want the upcoming spending bill to also permanently protect the roughly 700,000 immigrants who are in the country illegally after being brought to the U.S. as children. They stand to lose the protected status they were given under the Deferred Action for Childhood Arrivals program, or DACA.

Trump rescinded that program last year, setting an expiration date in March, and congressional Republicans have agreed to work with Democrats on a new law to grant rights to those immigrants. Those talks appeared to be progressing over the holidays, but Trump's demands that the deal include money to build a border wall could prevent an agreement.

Trump repeated his demands Saturday during a news conference held during a weekend planning retreat with congressional leaders at Camp David.

"We want the wall," Trump said. "The wall is going to happen, or we're not going to have DACA."

But Democrats are threatening to block any spending bill that includes funding for a wall — even if that means shutting down the government. Illinois Sen. Dick Durbin, the No. 2 Senate Democrat, said Friday that Democrats would not accept the latest offer from Republicans because it included $18 billion to build a wall. "President Trump has said he may need a good government shutdown to get his wall," Durbin said. "With this demand, he seems to be heading in that direction."

Alabama Democrat Doug Jones was sworn in last week, which leaves Republicans with just 51 votes in the Senate. GOP leaders will need votes from at least nine Senate Democrats to pass any spending or immigration legislation. To do that, negotiators will have to balance Democrats' calls for citizenship for all people protected under DACA against Trump's demands for border security and the construction of a border wall.

That standoff comes at a critical moment in the talks. Lawmakers are set to return to Washington on Monday with hopes of finalizing an immigration and spending bill while continuing talks to reauthorize a controversial wiretapping program, fully fund children's health insurance and send billions in disaster aid to roughly half a dozen states and U.S. territories.

Senate Majority Leader Mitch McConnell, R-Ky., told reporters on Thursday that he is confident that negotiators will reach a deal without the risk of a shutdown.

"Nobody wants to shut the government down on either side," McConnell said. "I'm optimistic we'll get a resolution to many of those issues before Jan. 19."

Finishing that work in just two weeks would be ambitious under any circumstances, but the talks come as Congress is also gearing up for the start of an election season that will determine which party controls both the House and the Senate.

Congressional negotiators were nearing an agreement in late December on the spending portion of the talks, but leaders have been unwilling to finalize any single portion of the deal until all other elements are complete.

That strategy is based on a political bet that a big, broad deal will include so many elements that nearly every lawmaker will be able to find something in the bill that they can support. That plan is particularly risky if lawmakers on either side try to add in politically motivated provisions — like abortion funding restrictions or means testing for government aid programs — known as poison pills.

The House plans to kickstart action on some parts of the broader agreement early next week with a vote to extend a controversial wiretapping program authorized by Section 702 of the FISA Amendments Act.

Leaders are also in talks over plans to extend the Children's Health Insurance Program, which is set to expire in March, though some states may run out of funding sooner. The program generally enjoys bipartisan support and could be added to a big spending bill in hopes of making it more appealing to lawmakers who might be skittish about other parts of the deal.

One group that may need some extra convincing are conservatives who are frustrated with Democrats' demands to increase funding for domestic programs as part of any eventual spending deal. Democrats want the upcoming spending agreement to uphold a recent pattern of funding domestic programs at the same rate as military expenditures.

Senate Minority Leader Chuck Schumer, D-N.Y., told reporters that cutting domestic funding would starve programs including health insurance for veterans and newly created initiatives to combat the opioid crisis. Schumer said there are a number of issues that have yet to be resolved, but like McConnell said he believes a deal is within reach.

"Democrats are hopeful we can get this all done," Schumer said. "We had very serious discussions with the Republican leadership in those areas, and now there will be staff discussions in the next few days trying to get those things done."