Accessibility links
FACT CHECK: Trump Touts Low Unemployment Rates for African-Americans, Hispanics Trump's numbers are right, but it's hard to make the case that he should get credit for them. 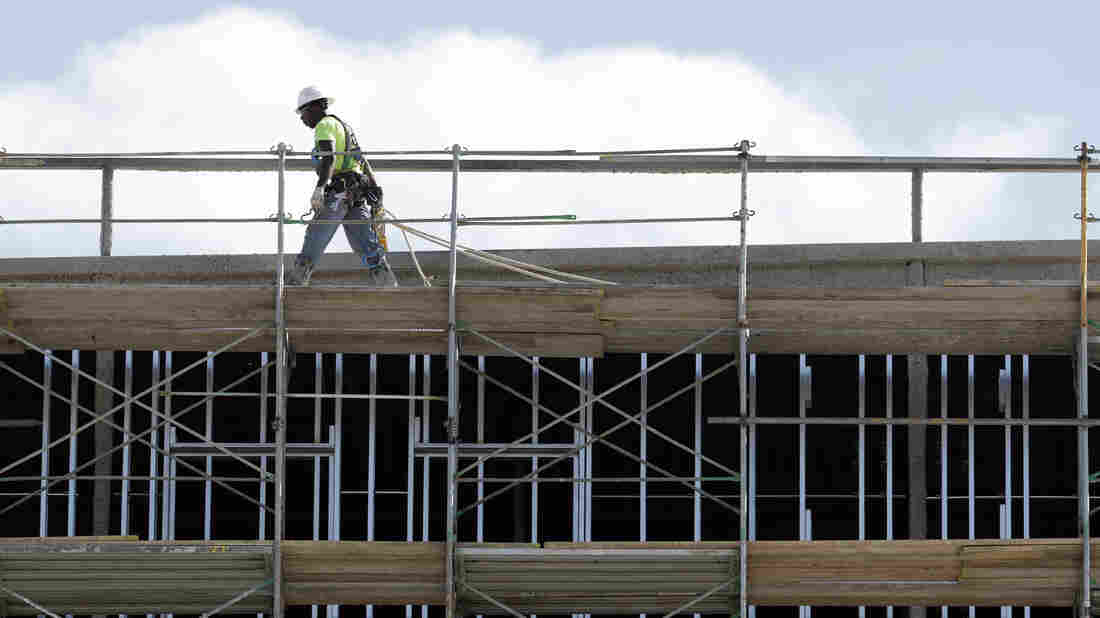 A construction worker walks along an apartment and retail complex in Nashville, Tenn. earlier this month. Mark Humphrey/AP hide caption 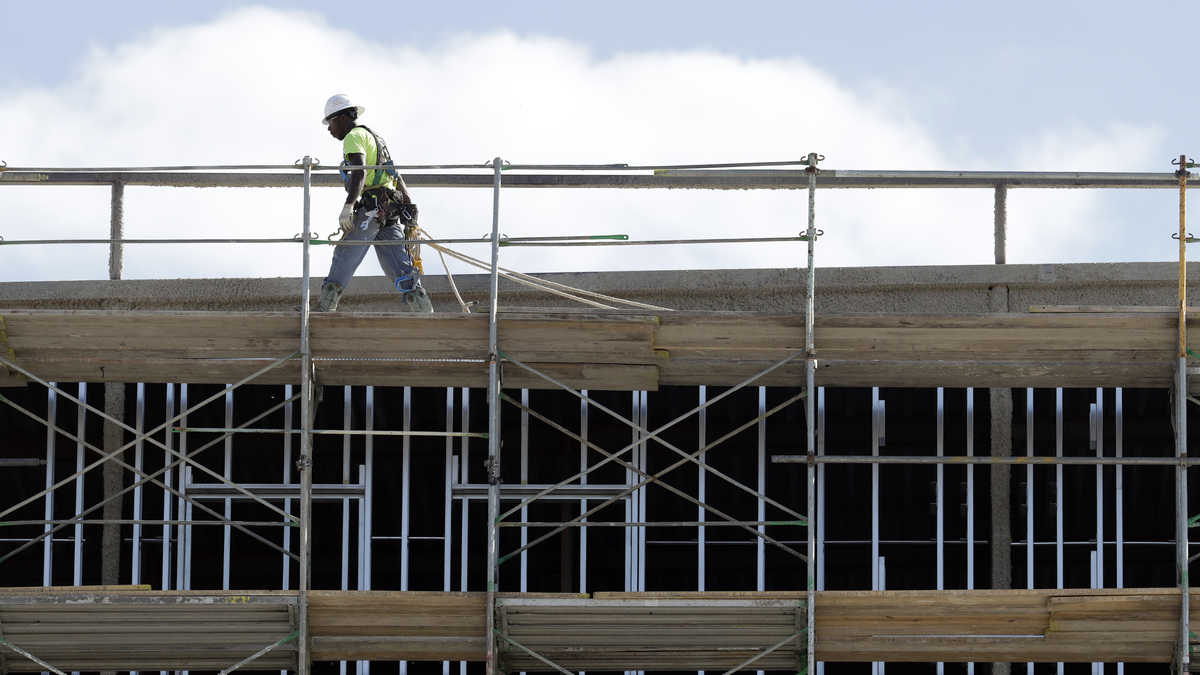 A construction worker walks along an apartment and retail complex in Nashville, Tenn. earlier this month.

The job market is strong right now, with a 4.1 percent unemployment rate, and President Trump knows it.

Earier this month, he also bragged about the latest jobs report, focusing in on minorities in particular.

On Twitter he cited that black unemployment is "the lowest ever recorded in our country." And he jabbed: "Dems did nothing for you but get your vote!"

African American unemployment is the lowest ever recorded in our country. The Hispanic unemployment rate dropped a full point in the last year and is close to the lowest in recorded history. Dems did nothing for you but get your vote! #NeverForget @foxandfriends

And then at a speech to the American Farm Bureau Federation, he did it again, saying, "African-American unemployment is the lowest it's ever been in the history of our records."

Presidents often take credit for a strong economy, and Trump fits that mold, touting jobs and stock market numbers regularly. So we decided to fact-check Trump on this claim: Is he right, and are these numbers his doing?

Black and Hispanic unemployment are at or near record lows.

Trump's numbers are right, but it's generally a stretch for presidents to take credit for job creation.

Trump is right that African-American unemployment hit a record low in December. The unemployment rate for black Americans is currently 6.8 percent, the lowest level recorded since the government started keeping track in January 1972.

However, that's not all Trump is doing in this tweet. He is implying that he caused these low African-American and Hispanic unemployment rates.

And a big problem with that claim is that those rates had been falling for long before Trump took office, and their declines don't appear to have picked up speed. This implies that there's nothing specific that Trump did to change this rate.

Indeed, both of these rates have been falling relatively steadily since around 2010, early in President Obama's tenure in the White House.

Separately, the president's Council of Economic Advisers touted the unemployment rate of other demographic groups on Friday, shortly after the latest jobs report was released.

"The overall unemployment rate, which by October had dropped to 4.1 percent, represented a 17-year low by year's end," they wrote. "The benefits of the low rates were felt broadly, resulting in unemployment rates for America's veterans, African-Americans and Hispanics that reached historic lows in 2017."

The total unemployment rate is quite low, at 4.1 percent. That's not a record, but for comparison with that African-American rate, it is near its lowest point since 1972.

So Trump here is trying to make a political point — one that he has made before — seeming to tell minorities that they should support him more than they do. But then, the president has a decidedly uneasy relationship with black Americans, as NPR's Brakkton Booker wrote on Saturday, and his rhetoric on immigration has also upset some Hispanics.

This leads to the bigger question of how much Trump has to do with any of this job growth, regardless of race or ethnicity. 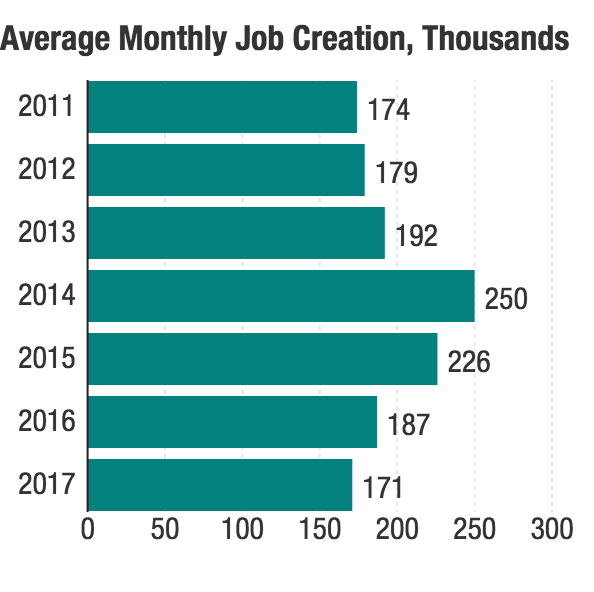 It is possible that the tax plan that Trump recently signed into law will inspire employers to hire more. Businesses could conceivably plow some of the money they save on their taxes thanks to that plan into job creation. In a late-November Yahoo poll of more than 1,200 business owners, half said the new tax plan would make them more likely to hire.

Then again, a majority of economists polled by the University of Chicago predict that long term, the tax plan won't lead to higher economic growth.

It's not that Trump has had zero effect on the economy. Though a strong global economy has been the main reason stocks are climbing ever higher, as NPR's Jim Zarroli reported in December, the president's agenda of deregulation and cutting corporate taxes has also likely very played some part in pushing stocks ever higher.

But the case that Trump has therefore significantly boosted job creation through the stock market isn't particularly strong, says one economist.

"To the extent that that affects business decisions, it may be that the president is having some impact on employment," said Michael Strain, director of economic studies at the American Enterprise Institute. "But it's very important not to overstate that."

There's also a bigger problem with the idea that Trump has created all these jobs — presidents don't have much immediate control over the economy, period.

It's true that they push policies or make hires that can affect economic performance — George W. Bush first appointed former Federal Reserve Chairman Ben Bernanke, who helmed the central bank as it worked to pull the country out of recession; and President Barack Obama signed the 2009 stimulus. It's also true that at the end of any given president's tenure, we look at the job market under that president.

But there's so much about the economy that presidents don't control — business cycles and other countries' economic health, for example. The White House also can't control broader macroeconomic trends, like the U.S. economy's long-term shift from goods-producing to service-based industries.

Indeed, a 2015 paper from Princeton economists Alan Blinder and Mark Watson found that while the economy has tended to grow faster under Democratic presidents, policy actions don't appear to account for that difference.

"Democrats would probably like to attribute a large portion of the D-R growth gap to better fiscal (and perhaps monetary) policies, but the data do not support such a claim," they wrote.

So could a president — with Congress' help — target communities with particularly high unemployment? Yes, says one expert — particularly in one policy area Trump already has been championing.

"There needs to be a deliberate attempt to retrain and recruit people into the economy through infrastructure programs," said Andre Perry, a fellow in the Metropolitan Policy Program at the Brookings Institution.

While the unemployment rate is relatively low — near what economists call "full employment" — it remains true that the black unemployment rate is always much higher than the national rate. He believes that targeted infrastructure policy could reduce that gap, helping disadvantaged Americans get back to work.

"Full employment means nothing to black folk in Baltimore or St. Louis or Pittsburgh," Perry said. "For far too long, black unemployment has been the sacrificial lamb of full employment, and so again, if there is an infrastructure plan put on the table, it should be targeted at populations in areas that are largely out of work. [And] not only inner-city black America; it's also rural white men who are being left behind by the economy."

If that's true, it seems likely to remain a hypothetical. Democrats and Republicans alike champion the idea of infrastructure, but partisan divides on how to do it remain so wide that passing an infrastructure package this year would most likely be a heavy lift.