Accessibility links
For 'The Immortalists' Knowledge Of Death Changes Lives In Chloe Benjamin's new book, four siblings growing up on the Lower East Side amid the upheavals of the 1960s gain forbidden, life-changing knowledge: The exact year and date of their deaths.

For 'The Immortalists' Knowledge Of Death Changes Lives

For 'The Immortalists' Knowledge Of Death Changes Lives 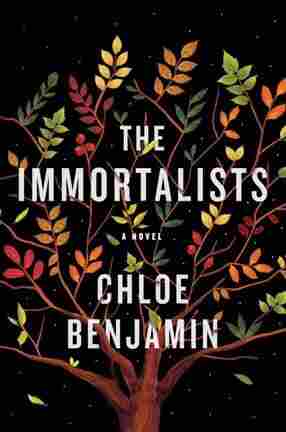 On New York's Lower East Side in 1969, a fortune teller has set up shop in a tenement on Hester Street. With long brown hair that "hangs in two slender braids," and lips that are "puckered like a drawstring purse," she attracts the young Gold children, who seek an audience with the crone as a respite from their summertime blues. These four — Simon, Klara, Daniel and Varya Gold — comprise the central quartet in The Immortalists, the second novel from Chloe Benjamin.

With a few notable exceptions, we know not the hour of our passing. But as the psychic ushers the young Golds one by one into her apartment lair, they each become privy to the kind of forbidden knowledge that is both a curse and a gift — the exact date when they will die. Their hyperawareness, their keen sensitivity to the tragic impermanence of life, forms the spine of the novel.

Benjamin was surely influenced by J. D. Salinger's Glass family — immortal in their own way — in creating the stable of brothers and sisters in The Immortalists. Tight as tight can be, they can nevertheless be easily annoyed by and even estranged from each other. The rich matrix of Jewish life in the neighborhood offers a demotic playground where the children are free to roam. It's a world of odd cultural mash-ups, such as warm egg custard tarts from Schmulka Bernstein's, the legendary Kosher Chinese deli on Essex Street. Leaking into this safe family haven is background noise specific to the summer of 1969: Woodstock, "Pinball Wizard," and the Stonewall riots.

Knowing one's own sell-by date naturally has repercussions. What do you do? Whom do you love? Life "is soon cut off," states the psalmist, "and we fly away." Disturbed by their existential destinies, the Golds become consumed by the question of how to properly live their lives. "They began together: before any of them were people, they were eggs, four out of their mother's million. Astonishing, that they could diverge so dramatically in their temperaments, their fatal flaws — like strangers caught for seconds in the same elevator."

Benjamin profiles her characters in turn. We see Simon first as a charming 16-year-old runaway, a dancer coming joyfully into an acceptance of his homosexual leanings. One of the first victims of the AIDS plague, he dies, yes, on his predicted day, before the disease that kills him has even been named. Simon is closest to his sister Klara, who teaches herself the art of magic and performs brilliantly, with a specialty of dangling at great heights, rope between her teeth. But she, too, has a date with death, and acts as if compelled to fulfill the fortune teller's prophecy.

Daniel works as a military doctor, determining which recruits are fit to face mortality on the battlefield. His passion to learn the truth about Simon and Klara puts his own life in peril. Only Varya, afflicted with serious OCD, has been promised the Biblical three-score and ten, and she learns to embrace her death-haunted siblings and right the wrongs of the family's past.

The reader will likely be thoroughly taken by the world of the Gold siblings, in all its shades of brilliant color. It's not a totally comfortable realm, since we know all too well how this tale's going to end, but getting there is lovely.

On offer in The Immortalists is the kind of in-depth research, period and otherwise, which can occasionally turn to sludge. Marmosets, prestidigitation, motor homes all endure thoroughgoing treatment at the hands of the diligent author. When Benjamin catalogs San Francisco's Castro district in the 1980s, the reader can bet the names of the gin joints of the day are spot on.

But the writing mostly flows easily. Klara "admires the look of the desert, the blue mountains and sorbet sky, but she doesn't like the feel of it, both languid and restless, or the heat that presses down on her like hands."

"We are not given a short life but we make it short," writes the Stoic philosopher Seneca. "Life is long if you know how to use it." The reader will likely be thoroughly taken by the world of the Gold siblings, in all its shades of brilliant color. It's not a totally comfortable realm, since we know all too well how this tale's going to end, but getting there is lovely.