Accessibility links
Adding Citizenship Question Risks 'Bad Count' For 2020 Census, Experts Warn The Justice Department has asked the Census Bureau to reinstate a question about citizenship on the census. But some say that kind of question could jeopardize the head count's accuracy. 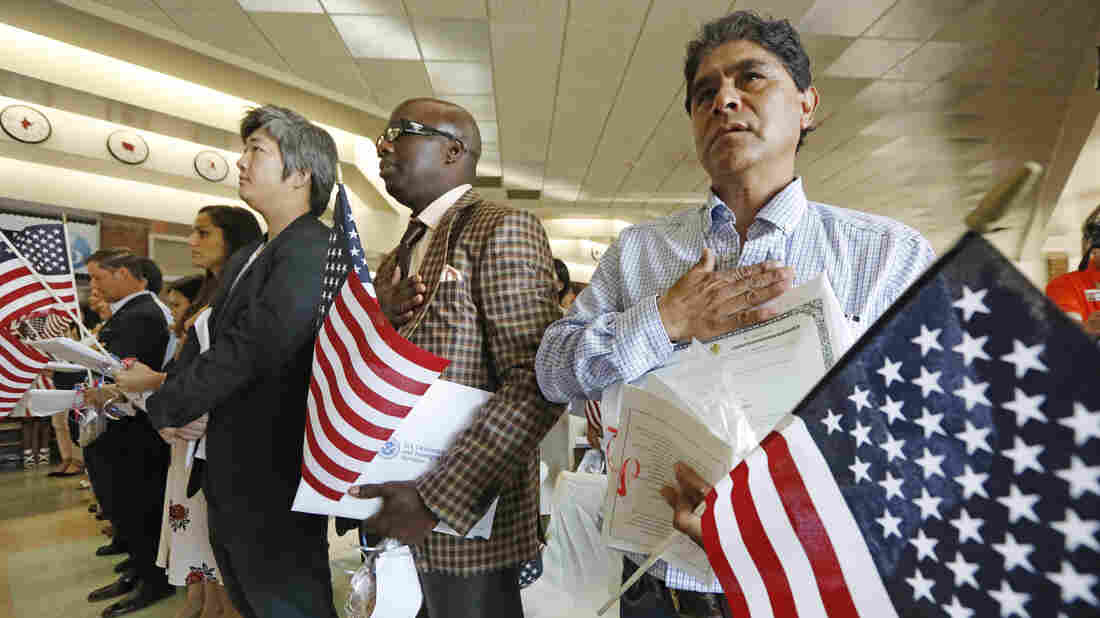 New citizens stand for the U.S. national anthem at a naturalization ceremony in Jackson, Miss., in September 2017. The Census Bureau is considering adding a citizenship question to the 2020 census. Rogelio V. Solis/AP hide caption 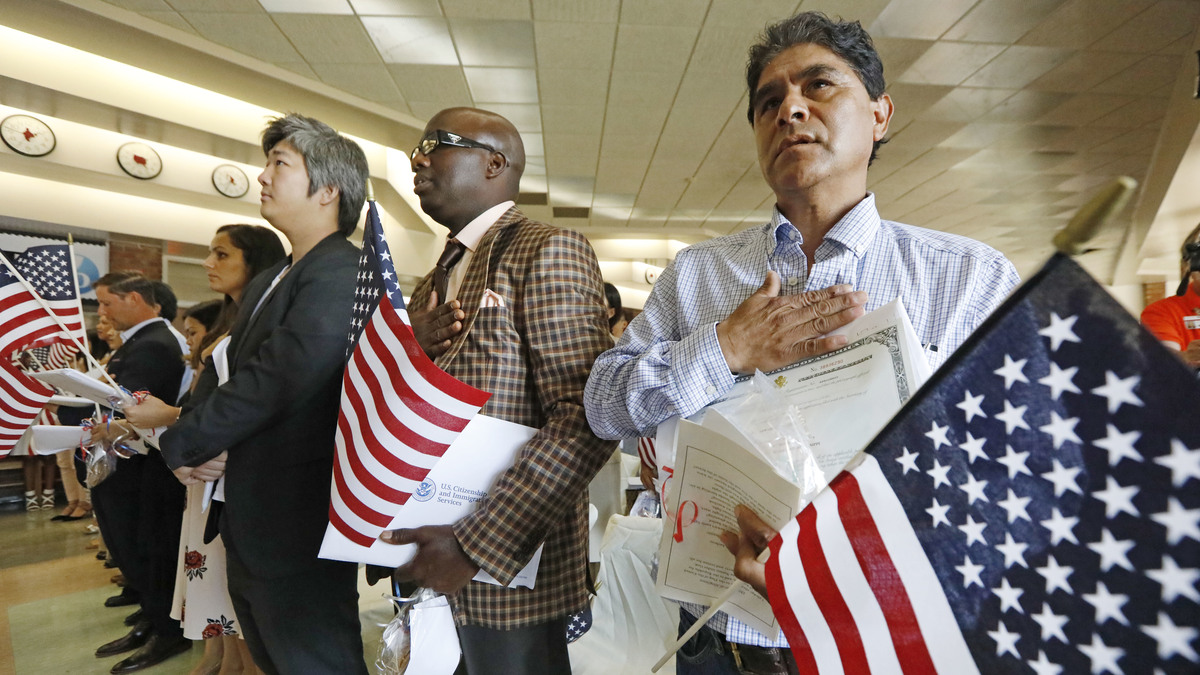 New citizens stand for the U.S. national anthem at a naturalization ceremony in Jackson, Miss., in September 2017. The Census Bureau is considering adding a citizenship question to the 2020 census.

Every decade, the U.S. Census Bureau asks some personal questions for the national head count required by the constitution. But since 1960, one topic that hasn't come up for all U.S. residents is citizenship.

The Trump administration is trying to change that with a Department of Justice request for a question about citizenship on the 2020 census.

In a letter to the Census Bureau, first reported by ProPublica, a Justice Department official made the case for asking about citizenship. In order for the department to enforce the Voting Rights Act's protections against racial discrimination in voting, the official wrote, it needs a better count of citizens who are old enough to vote.

The Census Bureau confirms the bureau received the letter. "The request will go through the well-established process required for any potential new question," a spokesperson for the bureau, Moniqua Roberts-Gray, said in a statement. The Justice Department has not responded to a request for comment.

The request from Justice Department comes at a precarious moment for the Census Bureau. The agency is preparing to collect responses in a routine field test of its 2020 questions beginning in March; the final wording of those questions is due to Congress by the end of the same month.

Data from the 2020 census are set to reshape the political landscape. The upcoming head count's population numbers are used to determine how many seats in the U.S. House of Representatives each state gets and how legislative districts are drawn, as well as distribute more than $600 billion a year in federal funds.

Run-Up To Census 2020 Raises Concerns Over Security And Politics

The bureau, though, has been facing mounting questions about whether it can successfully pull off an accurate head count in 2020. The Government Accountability Office has included the 2020 census on its list of high-risk government projects, citing rising costs because of declining response rates by mail and the cyber security and fraud risks involved with conducting the first census to rely mainly on internet responses.

The risk of a 'bad count'

Many census experts say adding a citizenship question could throw a wrench into an already-complicated project.

"It certainly raises the level of risk of getting a bad count or a count that doesn't that fairly represent everyone," says John Thompson, a former Census Bureau director who left the agency last year.

Asking about citizenship is not new to the census. Census takers first asked about it in 1820 to tally up the number of "foreigners not naturalized." While the topic has been included in questionnaires for smaller Census Bureau surveys, the last time a citizenship question was among the census questions for all U.S. households was in 1950, when the questionnaire included "If foreign born, is the person naturalized?"

Over the years, Republican lawmakers in Congress have introduced proposals calling for citizenship questions to reappear on census questionnaires, including former Sen. David Vitter of Louisiana and Rep. Steve King of Iowa.

Some experts fear, however, that reintroducing a citizenship question to all census participants in 2020 could discourage people from participating at a time of growing distrust in sharing personal information with the government.

In a recent memo written by Census Bureau staffers, researchers said that survey takers conducting field tests last year noticed a "new phenomenon" of increased fear among immigrant participants, many of whom referenced concerns about the "Muslim ban" and Immigration and Customs Enforcement. "Respondents reported being told by community leaders not to open the door without a warrant signed by a judge," the researchers wrote in the memo, adding that they saw "respondents falsifying names, dates of birth, and other information on household rosters."

Democratic lawmakers say they're worried that a citizenship question would dampen census participation among not only noncitizen immigrants but also U.S. citizens from mixed-status families, who may worry about putting immigrant relatives without legal status at risk if they answer the government's questions.

The Commerce Department, which oversees the Census Bureau, has received a letter from a group of Democratic senators calling the Justice Department's request "deeply troubling." The signers include Sen. Dianne Feinstein of California and two members of the Senate committee with oversight of the Census Bureau — Sen. Tom Carper of Delaware and Sen. Kamala Harris of California.

"This chilling effect could lead to broad inaccuracies across the board, from how congressional districts are drawn to how government funds are distributed," the lawmakers wrote.

The Commerce Department declined to comment on the letter.

Federal law prohibits the Census Bureau from releasing any data identifying an individual. But federal agencies and researchers can request census data on specific population groups.

"As we learn more and more about the ability to combine data from diverse sources, assuring protection of identities is known to be a very difficult task," says Robert Groves, who served as the Census Bureau's director under President Barack Obama until 2012.

These privacy concerns could raise costs for the Census Bureau, which sends census takers to visit households that do not initially respond to questionnaires. The Government Accountability Office has described this follow-up work the bureau's "largest and most costly field operation." For the 2010 census, it cost more than $2 billion in today's dollars to visit around 50 million addresses, according to a recent GAO report.

A case for better data?

Many civil rights advocates are questioning the Justice Department's reasoning for requesting a citizenship question.

Since the Voting Rights Act was enacted in 1965, the federal government has enforced the law's Section 2 protections against racial discrimination in voting using estimates of the number of voting-age citizens in the U.S. Those estimates have been based on data from either a small sample group of census participants who completed the so-called "long-form" questionnaire or, as in recent years, from the Census Bureau's American Community Survey, which is sent every year to about one in 38 households.

"As I know from my prior experience as the chief government enforcer of the Voting Rights Act, the Justice Department has never needed to add this new question to the decennial census to enforce the Voting Rights Act before," Vanita Gupta, who served in the Justice Department under President Obama and is now the president and CEO of The Leadership Conference on Civil and Human Rights, writes in a letter to Commerce Secretary Wilbur Ross.

Michael Li, a voting rights attorney at the Brennan Center for Justice at New York University School of Law, adds: "None of the civil rights groups that routinely bring Section 2 claims around the country have been hankering for this change."

Still, in its letter to the Census Bureau, the Justice Department argues that citizenship data collected through the census, which is conducted with every household in the U.S., would be more comprehensive than the data from the American Community Survey's smaller sample of participants.

"I think the Justice Department is right in saying that they need accurate small-area statistics for certain voting rights cases, especially on citizenship," says Thompson, a former Census Bureau director.

But he adds that he finds it "strange" that the Justice Department's request did not acknowledge the potential risks from adding a citizenship question.

"It could very well introduce a large undercount of the noncitizen population, but I don't think anyone knows that," Thompson says. "But if I were making decisions, before I would put it on the census, I would want to know that."

Asked if there's any opportunity to know that at this point through research, he replied: "I don't think so."

There are more than two years until the next Census Day, which is scheduled for April 1, 2020. But the bureau faces a strict timeline until then to prepare for the count. It must submit all of the 2020 census questions to Congress by the end of March, the same month it is set to start collecting responses in Rhode Island's Providence County in the last scheduled field test of how the 2020 census will be conducted.

If the Census Bureau does not include a citizenship question in its upcoming report to Congress, federal law does give Secretary Ross some wiggle room. Before the upcoming head count begins, he can submit a separate report to add the question if he "finds new circumstances exist which necessitate" the change.

A previous version of this story incorrectly said that the only field test of the 2020 census questions is set to begin in April in Rhode Island's Providence County. The Census Bureau has conducted previous tests of potential questions, and participants in Providence County can take part in the last scheduled field test beginning in March.