Accessibility links
Supreme Court Hears Challenge To Ohio's 'Use It Or Lose It' Voter System The justices heard a challenge to an Ohio law, which allows the purging of voter registrations because of a failure to vote in two consecutive elections. 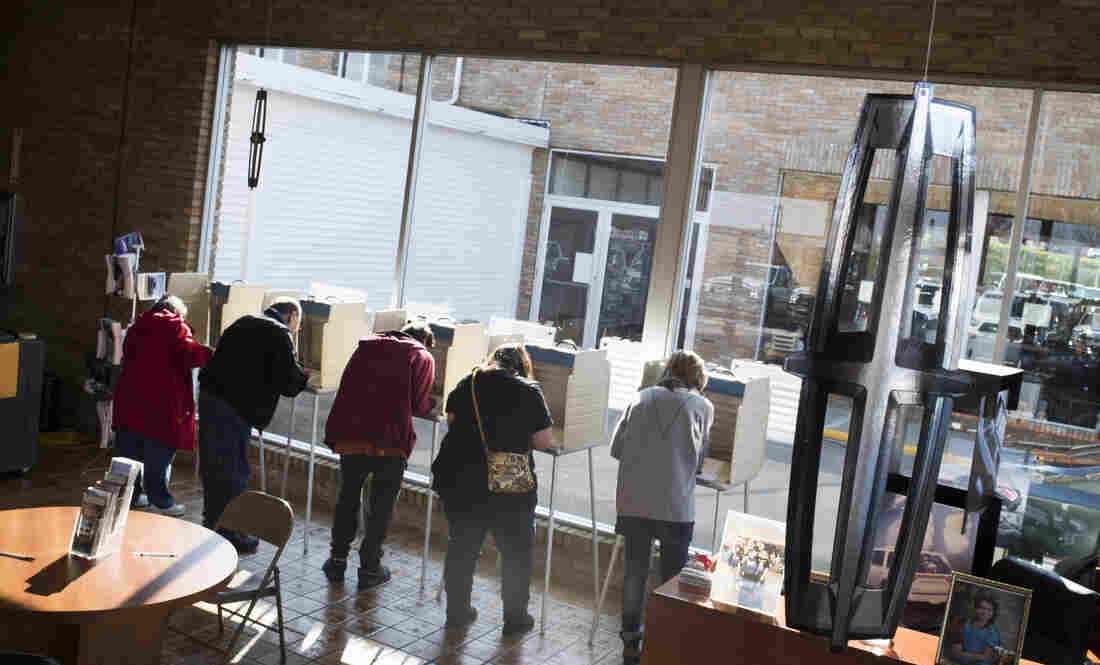 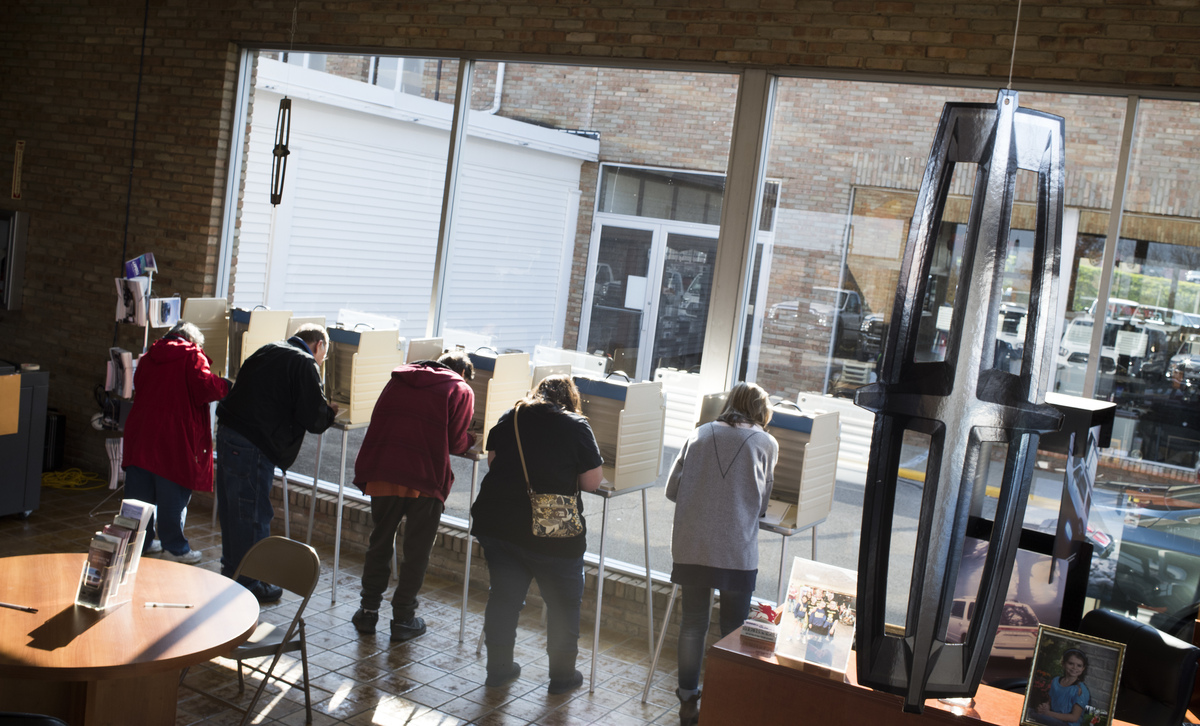 Voters cast their ballots in Salem, Ohio, on Nov. 8, 2016. On Wednesday the Supreme Court hears a case about Ohio's voter registration policy.

Ohio, which has the most aggressive voter-purge system in the country, currently strikes voters from the registration rolls if they fail to vote in two consecutive elections — and if they fail to return a mailed address confirmation form.

Pointed questioning from the justices on the bench highlighted a day that began with a confrontation on the steps of the court outside. It was between Ohio's secretary of state, Jon Husted, and the mayor of the town of Oak Harbor, Ohio, an Iraq and Afghanistan veteran, who argued that the state's position was outrageous.

Purging people based on failure to return a card that might not get forwarded to you, or if you're in the military service and might not have an easy way to return it, makes it harder to vote, Mayor Joe Helle argued to Husted in full view of local and national media.

"We believe our state is one where we make it easy to vote and hard to cheat," Husted said before microphones to the gathered media. "We make every effort possible to reach out to voters to get them registered to vote."

But Helle, who was listening, pushed back. "I never received any such notice, because I was an active-duty soldier that maintained my home of record in the state of Ohio, came back home after defending that right, and could not exercise it because of this archaic, terrible policy."

Husted argued that Helle didn't understand the process, but Helle didn't let it go. He said he was on a mountain in Alaska as part of his military service when his card apparently went out.

"All you have to do is use your right to vote," Husted said.

"From a mountainside, sir?" Helle responded, adding, "I was six years serving, came home, couldn't exercise my right to vote."

The justices heard arguments Wednesday morning in the case, which could have broad implications. The justices appeared split along familiar conservative-liberal lines in their questioning, though conservatives Clarence Thomas and Neil Gorsuch did not ask any questions.

Justice Samuel Alito led the charge for those who think Ohio's system is a reasonable way for the state to keep its rolls cleaned up.

Those arguing against the law say it violates the National Voting Rights Act, which says that a state cannot strike someone from the rolls for failure to vote. The emphasis is to get more people to vote — and not have them purged.

With Congress saying voting is a "constitutional right," can we allow you to use failure to vote as evidence of moving when people have a right not to vote if they choose? Justice Sonia Sotomayor asked the counsel arguing in favor of the law.

She added to Noel Francisco, President Trump's solicitor general, who argued in favor of Ohio's law, "There's a 24-year history" of Democrat and Republican Presidents and their Solicitors General taking a position "contrary to yours. It seems quite unusual that your office would change the government's position so dramatically."

On the other hand, the emphasis of the 2002 Help America Vote Act is to clean up voting rolls that have too many people on them who have left or died.

Death isn't a problem, said Paul Smith, an attorney arguing against the Ohio system, since there's a national database on who has died, and within the state, anybody who has a driver's license is required to tell the DMV within 10 days of moving.

Breyer conceded that he often throws away a lot of this type of mail. Smith noted that 70 percent of residents in Ohio do the same and don't return the notifications. Just 1 in 5, he said, sends them back, and 10 percent come back as "undeliverable."

Suppose, said Breyer, the state were to send cards that are marked "not forwardable" and eventually the state could delete anything they got back that said "not deliverable" or addressee unknown. Could the state then presume that not deliverable meant the voter had moved?

How this case got to the Supreme Court

The lead plaintiff in the case is Larry Harmon, a software engineer from the Akron area, who normally votes in presidential election years, but not the midterms. In 2012, neither Barack Obama nor Mitt Romney excited him, so he decided not to vote.

When he did decide to vote a couple of years later, he found he was no longer registered. He had been purged from the voter rolls because he hadn't voted in the previous two elections.

"I kind of got angry," Harmon said. "I've been paying taxes and doing all the things required of me to be a good citizen, but they had turned me away and taken away my right to vote."

He said he doesn't remember getting any sort of mailed request from the state to confirm his voting address. After all, he said, he has lived at the same address for more than 16 years, and he and his neighbors often get each other's mail.

"I don't know why they trusted the U.S. mail, unless they were going to send me a registered letter," he said.

He noted there are many other ways to check addresses — tax forms, property tax listings and driver's licenses, to name just a few.

"I've earned the right to vote," the Navy veteran said. "Whether I use it or not is up to my personal discretion. They don't take away my right to buy a gun if I don't buy a gun."

So he sued the state, represented by Demos, a liberal public policy organization, and he won. The lower courts said that Ohio's voter purge law violates the NVRA, better known as the "Motor Voter law."

The law is aimed at making voter registration easier. It says that while states should take steps to keep their voting rolls up to date and accurate, they may not remove people from the rolls "by reason of a person's failure to vote."

Ohio Attorney General Mike DeWine declined to be interviewed for this article. But in its briefs, Ohio claims it is not using failure to vote as the reason for striking Harmon and thousands of other voters from the rolls.

Rather, the state argues, it is striking from the rolls those who do not vote for two years, and who fail to confirm their registration at the same address over the next two years.

Harmon and his lawyers contend that the trigger for removal is in fact the failure to vote in two consecutive elections.

Is the issue partisan?

Twelve states, largely controlled by Democratic officeholders, have filed briefs supporting Harmon. They all point to methods they say are far more effective than unregistered mail for ascertaining whether someone has changed his or her legal voting address.

They also point to other reasons people may have temporarily moved, but not changed their voting address, including military service.

Nineteen states, largely controlled by Republican officeholders, on the other hand, are supporting Ohio's position, though none has a law as aggressive as Ohio's in seeking to verify the voter registry.

Stuart Naifeh, who will argue the case for Harmon, notes that both Democratic and Republican secretaries of state have used this system in Ohio for decades.

"We don't believe it's a partisan case," he said. "We believe that what Ohio is doing is unlawful under the National Voter Registration Act regardless of the party of secretary of state."

Failure to vote is not unusual in this country. In 2016, 29 percent of the registered voters in Ohio failed to vote. Nationwide, the number was even higher, more than a third, according to the U.S. Election Assistance Commission.

Lawyers arguing against the Ohio voter purge system note that once you miss two federal elections in that state and fail to reaffirm your registration, if you go to vote, and cast a provisional ballot, that ballot will not be counted because you are no longer registered.

The irony is that by casting a provisional ballot and swearing to your address you will be able to vote in the next election.