Accessibility links
Rep. Darrell Issa To Retire, Adding To Record GOP Exodus From Congress There are 31 House Republicans leaving their seats open this fall. The last time a party had nearly that many retirements during a midterm year was when Democrats lost control of Congress in 1994. 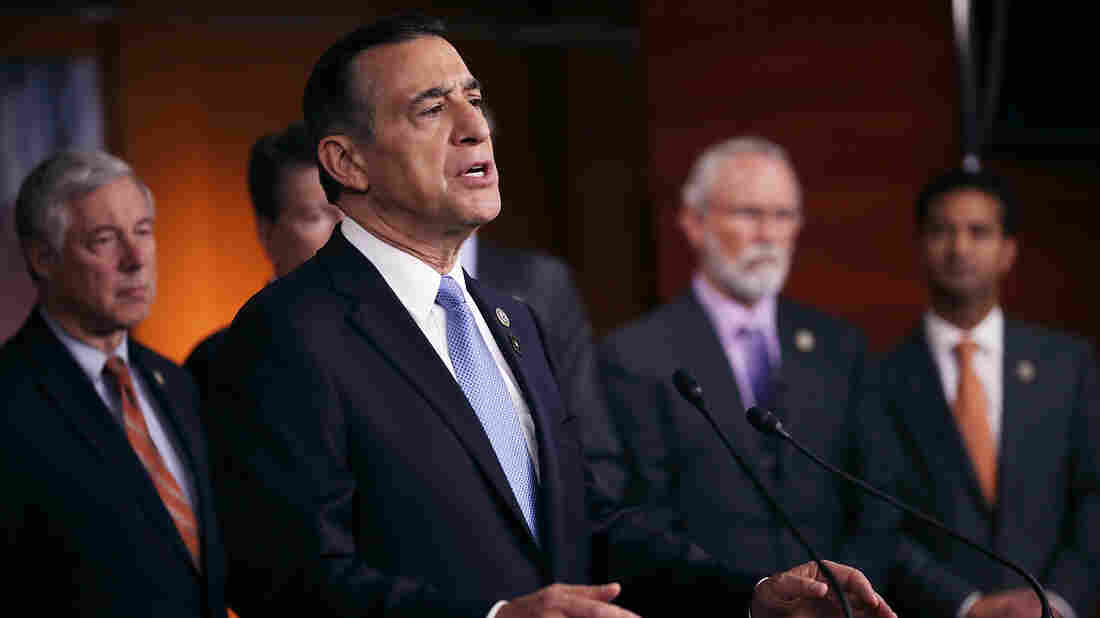 Rep. Darrell Issa, R-Calif., announced Wednesday that he is retiring from Congress and would not be seeking re-election, the 31st House Republican to do so. Chip Somodevilla/Getty Images hide caption 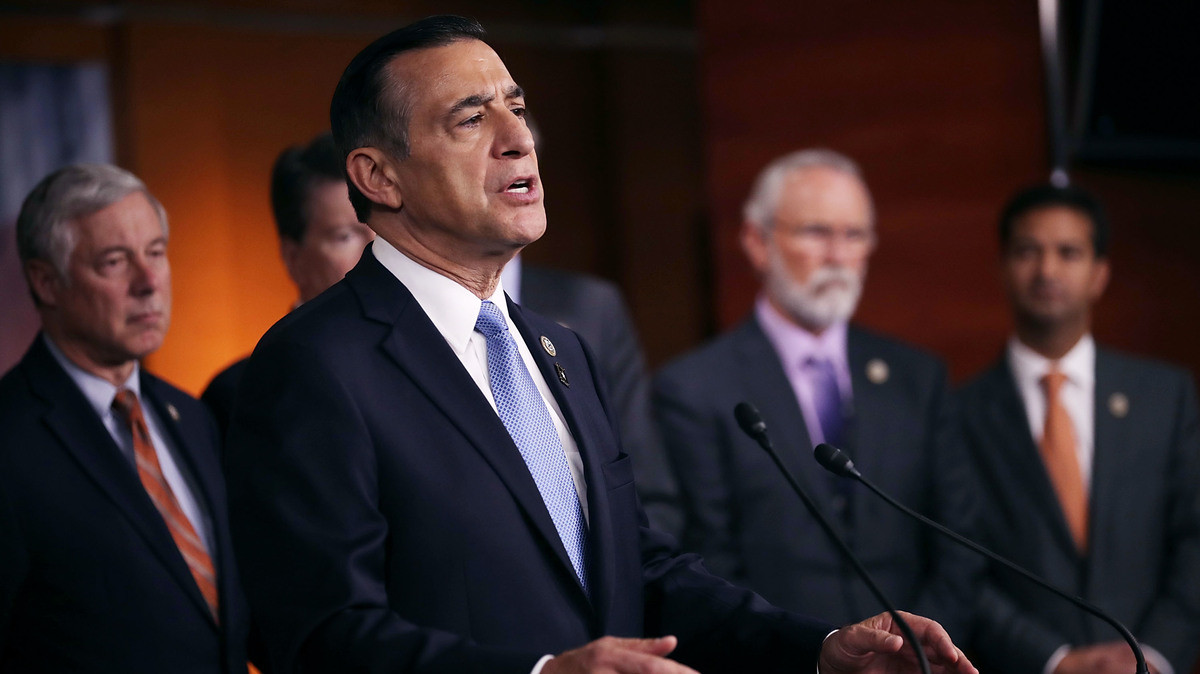 Rep. Darrell Issa, R-Calif., announced Wednesday that he is retiring from Congress and would not be seeking re-election, the 31st House Republican to do so.

Rep. Darrell Issa, R-Calif., announced he will not seek re-election Wednesday, adding to a record number of House Republicans heading for the exits ahead of the 2018 midterms — perhaps seeing the writing on the wall of a possible wave election for Democrats.

There are now 31 Republicans who will not seek re-election in November: 19 who are retiring outright and another 12 who are running for higher office. And that list is is expected to grow in the coming weeks.

The last time a party had nearly that many members retire during a midterm year was in 1994, when 28 Democrats left and the GOP subsequently took back control of Congress in the Republican Revolution. Now, it's Republicans who find themselves in the opposite and unenviable position. Just one year into his term, President Trump has record low approval ratings, congressional Republicans have had few legislative achievements save for the tax overhaul they passed last month, and Democrats seem more fired up than ever to issue a rebuke to the GOP at the ballot box this year.

2018 Midterms: What To Watch For One Year Out

"There's no question when you look at these midterms that the Democratic base is more intense than the Republican base, and that offers some significant challenges to Republicans in holding the House, and retirements in marginal seats like [Rep. Ed] Royce's don't help," said former Rep. Tom Davis, R-Va., a former National Republican Congressional Committee chairman.

On Monday, Royce, a California Republican, added his name to the retirement roster. The House Foreign Affairs chairman is now one of eight committee chairmen who are calling it quits. And now with Issa also leaving, there are four open districts held by a GOP member that Trump lost last election, making those top Democratic opportunities.

Democrats need 24 seats to flip control of the House, and history, in addition to other promising signs, is on their side. Going back to World War II, the president's party loses an average of 28 seats in his first midterm election — and none of those happened with a president's approval rating as low as Trump's currently sits. The exception was in 2002, when the Republicans gained seats about a year after the Sept. 11 attacks.

According to the latest RealClearPolitics average, Democrats have an 11-point edge in the generic ballot, on track with where they need to be to pick up the seats to take control, even with the advantage Republicans have from gerrymandering and the pattern of Democratic voters clustered in urban areas.

"Vulnerable House Republicans would clearly rather call it quits than stand for re-election with a deeply unpopular agenda hanging over their heads," said Democratic Congressional Campaign Committee spokesman Tyler Law. "The total number of Republican retirements and the importance of the open seats to the overall battlefield are a huge problem for Speaker [Paul] Ryan's imperiled majority."

For Democrats who saw things go the other way the last time the House flipped in 2010, the retirement announcements are a bit of deja vu — but the good kind.

"Retirements, especially from competitive seats, are a harbinger of the cycle to come," said Democratic strategist Jesse Ferguson. "Some members do truly retire to spend more time with their families, but many retire rather than face voters in a tough re-election in a bad climate. And you'd rather go out on top than go out as a loser."

Ferguson was working at the Democratic Congressional Campaign Committee eight years ago when it began to see its own avalanche of members in competitive seats decide to leave.

"I remember sitting there seeing Democrats who had told us they were going to run announce that they were retiring, and we knew full well it was partially driven by concerns about their own re-election prospects," Ferguson recalled.

Royce and Issa could both fall into that category. Royce had insisted last year that he was on board for another term, but then abruptly changed his mind on Monday. His Orange County district — which used to be solid Republican territory — voted for Democratic nominee Hillary Clinton over Donald Trump in 2016 by more than 8 points. It's now one of the most vulnerable seats in the country and follows a pattern of longtime GOP-held suburban seats sliding away from Republican control.

Issa's San Diego seat also shifted quite a bit after the last election. Trump lost this seat by 7 points, while in 2012, GOP nominee Mitt Romney carried it by 6 points. Issa also narrowly escaped with a victory in 2016, only winning by 1,621 votes.

Even before Issa's and Royce's announcements, there were already other retirements for Republicans in diverse, swing seats that Clinton won, inducing heartburn for party leaders. Rep. Illena Ros-Lehtinen's Miami district is all but gone for the GOP; Trump lost it by 19 points to Clinton, making it the most Democratic-leaning seat held by a Republican.

Republicans could struggle to hold onto Washington Rep. Dave Reichert's suburban Seattle district, too. Clinton eked out a 3-point victory there, and it sits dead in the center of the Partisan Voter Index, a measure by the Cook Political Report of the competitiveness of districts.

And there is likely to be another opening on the board if Arizona GOP Rep. Martha McSally, as expected, announces her bid for Senate on Friday. Clinton carried her Tucson district by about 5 points in 2016.

There are other open seats created by retirements that give Democrats opportunities as well, particularly in marginal seats. Trump won the districts of both retiring Reps. Dave Trott, R-Mich., and Charlie Dent, R-Pa., by 7 points or less, and the Partisan Voter Index gives them both a rating of R+4. Democrats also have a shot at Rep. Frank LoBiondo's southern New Jersey district, which Trump carried by 4 points and is rated R+1.

If other seats in that same category come on the board, that could be where the GOP House majority is made or broken. Those members on Democrats' watch list include New Jersey Reps. Leonard Lance and Rodney Frelinghuysen as well as New York Rep. Peter King. All three voted against the tax overhaul package which greatly reduced the deduction for state and local taxes, which are particularly high in their states.

Is A Big, Blue Wave Forming Off The Political Coast?

However, Davis said that even with the House numbers climbing, he doesn't see a "tsunami of retirements" — yet.

He and other Republican strategists pointed out that many members are simply running for other offices, which means they don't see the environment as completely toxic. Plus, many House committee chairmen, regardless of who controls the chamber next year, would have been forced to give up their gavel because of term limits — and going back to being a backbencher is never appealing.

The vast majority are leaving behind safe Republican seats that will undoubtedly stay in GOP hands and have simply been in Congress for decades and are ready to go. These include Reps. John Duncan, R-Tenn., Lamar Smith, R-Texas, and Bob Goodlatte, R-Va. However, many of them undoubtedly remember when they were in the minority and know it isn't an appealing prospect.

Still, Republicans remain optimistic in their ability to defend their competitive seats and are even more buoyed by the passage of the tax cuts legislation last month, which will help energize their base as, they believe, people will see more money in their pockets.

Democrats have some headaches of their own because of retirements. Fifteen of their members aren't seeking re-election to the House, with seven leaving outright and eight running for higher office.

The most problematic opening is created by Rep. Tim Walz's decision to run for Minnesota governor — Trump carried his district by 15 points. Another seat Democrats will have to fight to hold on to is that of Rep. Carol Shea-Porter, D-N.H., who is retiring and is the only Democrat leaving outright who sits in a district Trump won.

Two Senate candidates that give Democrats excellent shots at picking up seats in Arizona and Nevada have, in turn, created headaches for the House committee. Trump carried Rep. Jacky Rosen's southern Nevada seat by 1 point, and she only barely beat a weak GOP candidate. In Arizona, Rep. Kyrsten Sinema's decision to run for Senate gives Republicans an opening as well — her seat has a PVI of only D+4; however, Clinton easily won the district by 16 points.

And the decision by Rep. Ruben Kihuen, D-Nev., not to seek re-election amid sexual harassment allegations adds another seat Democrats have to defend in a district Clinton only carried by 5 points.

Those openings on their own are just one reason that many Democrats are urging caution in assuming that there is a massive blue wave forming in November like Democrats had before they took back the House the last time.

"I think there's a good chance," said one Democratic member of Congress. "But to get a wave, you got to have a very energetic base for the minority party, and you have to have a suppressed base for the majority party."

The member pointed to the fact that upwards of 80 percent of Republicans remain supportive of Trump, higher than GOP support for President George W. Bush ahead of the 2006 midterm elections when Democrats swept to power. "So in an off-year, when just the base is kinda turning out, I think we can pick up a lot of seats."

If Democrats want to do more than pick up a lot of seats but ultimately flip the House, they will need an energized base, an expanded playing field, a successful defense of their own turf and some plain luck if more Republicans are weighing retirement.