Accessibility links
How The Fusion GPS Founder's Testimony Fits In The Russia Saga Sen. Dianne Feinstein, D-Calif., made a big splash by releasing the roughly 300-page paper bomb — a tactical win for Democrats in Washington, D.C. 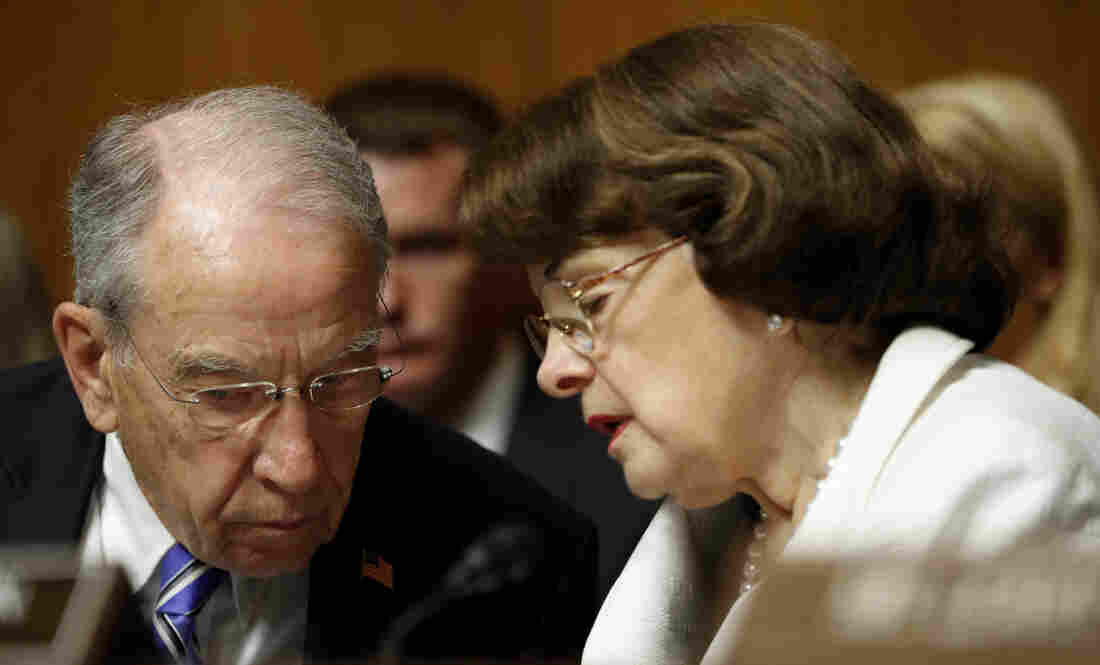 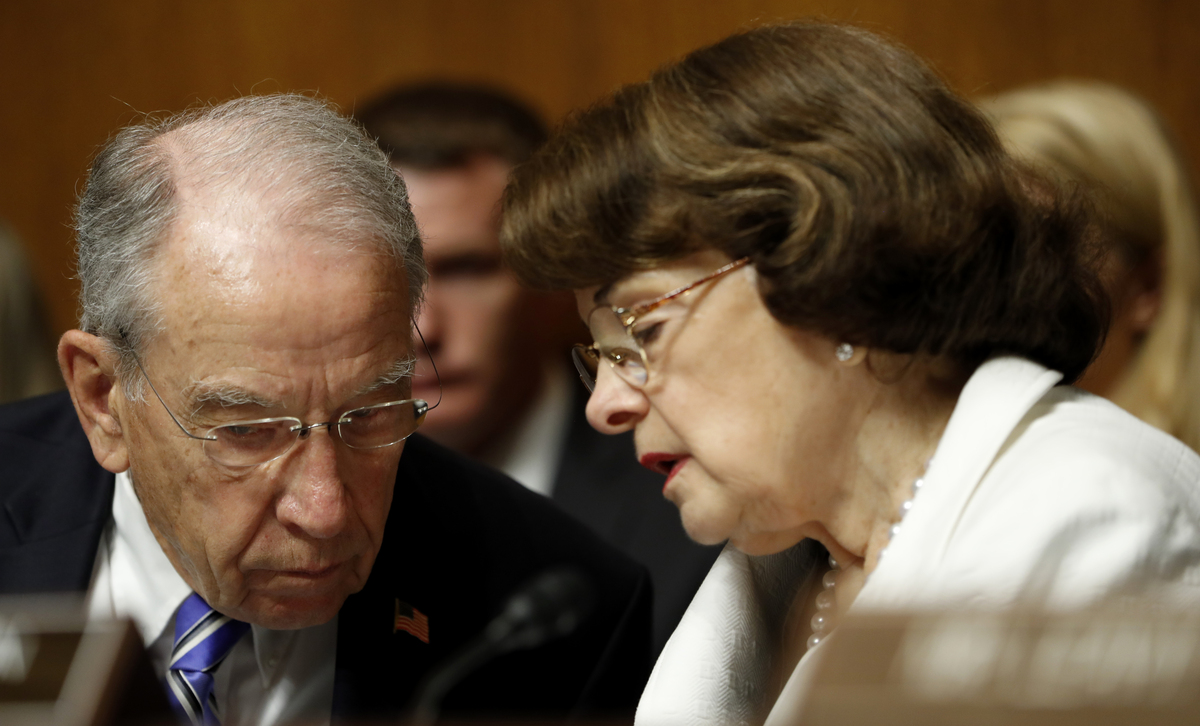 The infamous Russia dossier was not the sole basis for the FBI's investigation into Donald Trump's ties to Russia, according to a newly public document that notched a tactical win for Democrats inside Washington, D.C.

That detail and a few others in a nearly 300-page transcript released on Tuesday by Sen. Dianne Feinstein, D-Calif., blunts charges by Republicans that the FBI and Justice Department used politically funded agitprop to launch an investigation into Trump's potential Russia connections — one that continues to this day.

Feinstein used her own authority to make public a long set of questions and answers from August between Senate Judiciary Committee investigators and Glenn Simpson, whose political research shop, Fusion GPS, plays a key role in the Russia saga.

Simpson and Fusion GPS were hired in 2016 to do opposition research on Trump, first by a conservative donor and later by Hillary Clinton's campaign. One way Fusion GPS did that was by hiring a former British intelligence officer, Christopher Steele, to run the traps among his contacts inside Russia and find out what he could about Trump.

The result was the explosive, much-discussed and unverified dossier. NPR has not detailed its contents because it is unsubstantiated, but it describes an effort by powerful Russians to build bridges with Trump and his campaign. The file includes salacious details that could have embarrassed Trump and been used as leverage over him.

The question about how closely people in Trump's orbit worked with the Russians who attacked the 2016 election has always been bigger than the dossier. Court documents, congressional testimony and other reports have depicted a series of overtures by Russians to Trump campaign aides, including a meeting with Trump's son, son-in-law and campaign chairman in Trump Tower.

Trump and the White House insist there was no collusion between the campaign and the Russians. And Republicans have focused heavily on the scandalous aspects of the Steele dossier because they are outrageous and unverified, as part of a strategy to impeach the document as a way to impeach the case that Trump world might have conspired with the Russian interference campaign.

This is why Democrats say it's important that Simpson told Judiciary Committee investigators that he did not instruct Steele to dig up dirt on Trump or find ways to embarrass him. In fact, Steele was so shocked by what he learned from his sources that he felt obliged to report it to the FBI, Simpson says.

Steele felt like a person driving to work who sees an accident and feels compelled to call 911, Simpson said.

Trump opponents want that testimony to undercut the attack line propounded by Republican critics such as Ohio Rep. Jim Jordan, who has mused about Clinton or Democrats paying Steele to scare up gossip hot enough to entice the FBI into launching a baseless investigation.

Several important questions, however, remain unanswered, and Simpson, Fusion GPS and Steele are not fully inoculated against some of the charges they've endured from allies of the White House and other critics.

Moreover, nothing about Simpson's testimony will deflect the campaign of derision directed by Republicans against a Justice Department and FBI they call "biased" on behalf of Hillary Clinton and against Trump.

For other critics, the Simpson transcript includes a reminder about his potentially conflicting incentives: Fusion GPS has also done work for a law firm that represented the Russian company Prevezon Holdings. Prevezon's lawyer, Natalia Veselnitskaya, was also present at the 2016 Trump Tower meeting. Fusion GPS has told the Washington Post that it "had no prior knowledge" of that meeting and denied any involvement.

And nothing about the transcript resolves another of the questions Jordan has mused about: Did the FBI use material from the unverified dossier in asking the Federal Intelligence Surveillance Court to grant warrants for eavesdropping or other surveillance?

Those details are highly classified — the FBI and National Security Agency would never discuss that publicly, and there would be no way for Simpson to know. But the ability for supporters of the White House to discuss classified subjects in ways that could never be resolved in the open is a potent political weapon in this saga.

The Judiciary Committee's chairman, Sen. Chuck Grassley, R-Iowa, and another key Republican member, South Carolina Sen. Lindsey Graham, used it on Jan. 5 in issuing a "criminal referral" against Steele to the Justice Department. They said he had given false information — but the details are secret, so the matter can't be hashed out in the open.

In releasing the Simpson transcript on Tuesday, however, Feinstein has taken away some of the advantage that Republican majorities enjoyed before. Now all of Simpson's testimony to her committee is available for review — and Democrats said that's the way it should be.

"For months, there has been a campaign to discredit Christopher Steele and cast doubt on the FBI's investigation into Russian interference in the 2016 election," said Sen. Sheldon Whitehouse, D-R.I., who also sits on the Judiciary Committee. "The American people should have the opportunity to see the full transcript and judge for themselves."

For Republicans, however, including Chairman Grassley, Feinstein has actually hurt the work of the committee in finding out about potential conspiracy with Russians or the prospect of obstruction of justice.

"Feinstein's unilateral decision was made as the committee is still trying to secure testimony from other witnesses, including Jared Kushner," said Grassley's spokesman. "Her action undermines the integrity of the committee's oversight work and jeopardizes its ability to secure candid voluntary testimony relating to the independent recollections of future witnesses."