Accessibility links
Democrats Unveil A Blueprint For Battling Putin, Daring Trump To Act Democrats on the Senate Foreign Relations Committee say the U.S. is ignoring danger at its peril, but they despair about the prospects for serious action in Washington, D.C. 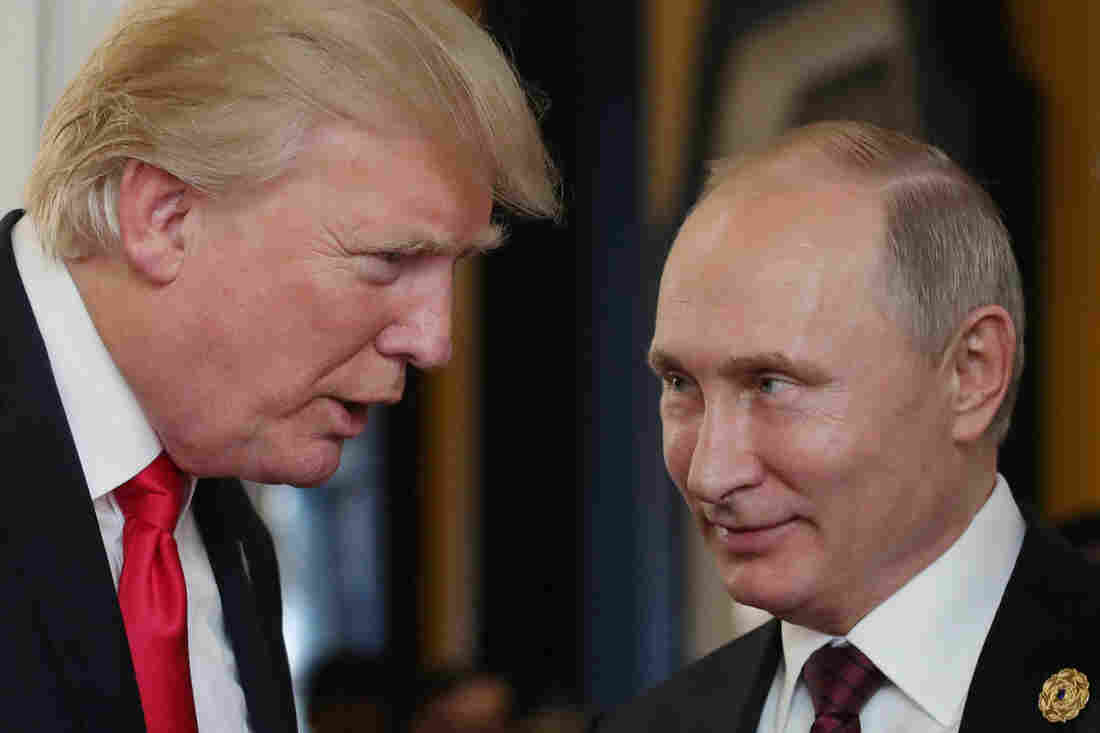 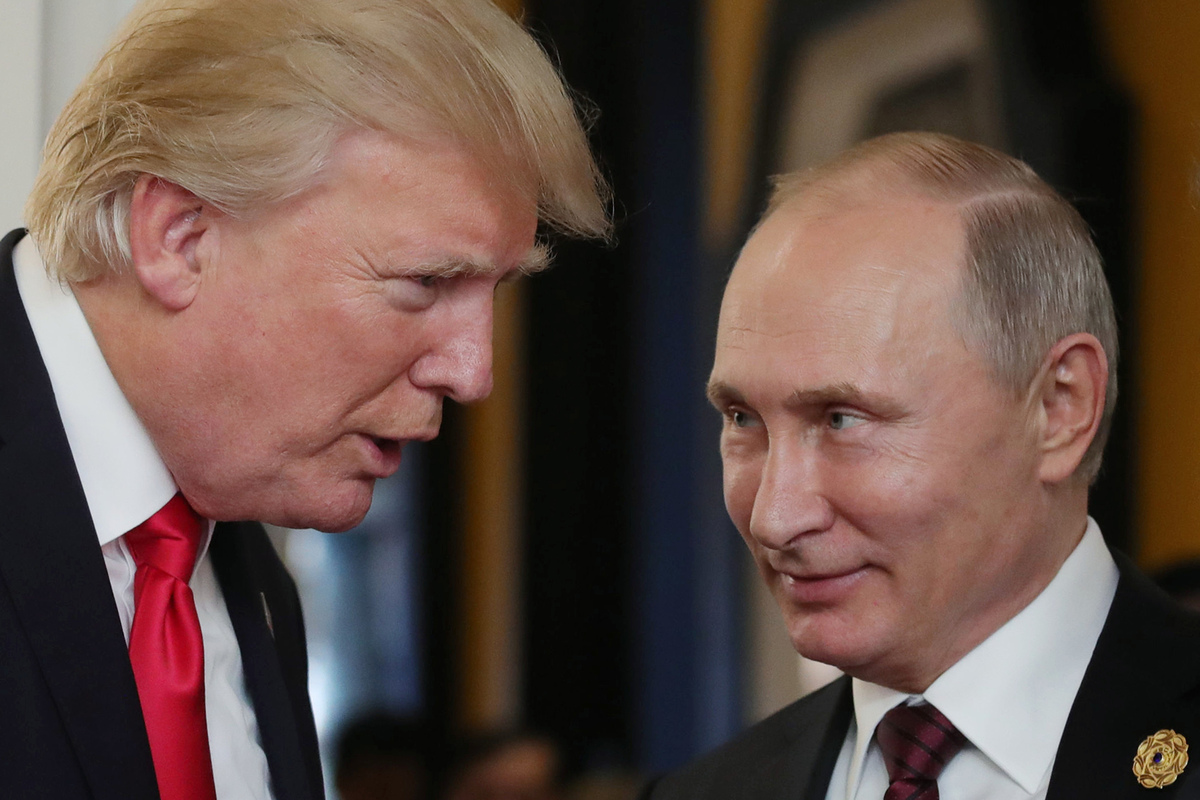 President Trump chats with Russian President Vladimir Putin as they attend a meeting at the Asia-Pacific Economic Cooperation summit in Vietnam in November.

A strange twist of national security politics in Washington, D.C., has meant the United States isn't responding seriously to the ongoing threat of foreign interference, Senate Democrats charged in a new report.

The study, about Russian leader Vladimir Putin's international crusade against democracy, is expansive, at more than 200 pages. It documents Russian offensive efforts in 19 different countries. But what it doesn't include is any optimism that President Trump might act to push back against the Kremlin's aggression.

"Never before in American history has so clear a threat to national security been so clearly ignored by a U.S. president," the report's preface reads.

Democratic staff members in the Senate Foreign Relations Committee laid out a detailed list of government and private sector recommendations, accompanied by an exhaustive breakdown of how Putin's Russia has sought to "undermine democracy and the rule of law in Europe and the United States."

The Kremlin uses well-known avenues such as disinformation and military invasions and less-publicized tactics such as the weaponization of energy resources and support for fringe political groups within healthy democracies.

The Foreign Relations Committee's top Democrat, Sen. Ben Cardin of Maryland, rolled out the study during a week in which he and compatriots are taking the offense against Trump amid the sprawling Russia imbroglio.

Cardin sought to make a splash with the study one day after his colleague, Sen. Dianne Feinstein, D-Calif., made one by releasing the transcript of a key interview given by a witness in the Senate Judiciary Committee's Russia investigation.

Cardin's Russia study is also one of the first out of the gate in a year that's sure to yield an avalanche of paper on Russia, between the numerous congressional probes and Justice Department special counsel Robert Mueller's ongoing investigation.

Trump and the White House deny they played any role in the Russian attack on the 2016 presidential election. The president tried to drive that point home in a news conference on Wednesday.

"There has been no collusion between the Trump campaign and Russians or Trump and Russians," he said. "No collusion. When I watch you interviewing all the people leaving their committees, I mean, the Democrats are all running for office, trying to say this, that — but bottom line, they all say there's no collusion. And there is no collusion."

Democrats complain that the president's focus on his own political predicament and attacks by Republicans on the FBI and Justice Department are stealing focus away from the ongoing peril of foreign interference and the need to secure American elections this year. These issues shouldn't be partisan, they argue.

"We've had Republicans work with us to implement many of the recommendations we're making," Cardin told NPR's Steve Inskeep on Wednesday's Morning Edition. "I am confident that this report will be embraced by Democrats and Republicans. We know we need to protect America's security."

The report details the multi-pronged Russian strategy, known by intelligence professionals as "active measures," that have been well publicized: the use of social media by Russian agents to stoke conflict in American society in 2015-16, plus cybertheft targeting politicians in the U.S. and abroad — most notably, in France, leading up to that country's election in May 2017.

Rep. Will Hurd, R-Texas, spoke with Cardin at an event unveiling the report at the German Marshall Fund of the United States, which houses the Alliance for Securing Democracy, an initiative meant to combat Russian anti-democracy efforts.

Hurd served as an undercover CIA officer overseas before being elected to Congress, and he said countries in Europe and Asia are less likely to be affected by Russian disinformation techniques.

"The closer you are to Russia, the less likely you are to believe their nonsense," Hurd said.

The report also touches on ideas that haven't received so much focus.

Notably, it recommends the U.S. find ways to help Europe, and especially Eastern Europe, wean itself off being so dependent on Russia for energy. The report says Putin has worked to develop such key dependencies to make countries vulnerable to political manipulation.

"The past decade-plus has seen Putin and the Kremlin pursue this 'energy superpower' strategy with extreme vigor, not only using energy supplies as leverage, but also accumulating large stakes in energy infrastructure throughout Europe," the report says.

Many countries in Europe are either largely or completely dependent on Russia for natural gas, and as the continent seeks to reduce its carbon dioxide emissions, it will likely only become more reliant on Russia.

On Wednesday, Trump seemed receptive to the idea of cutting into Russia's energy dominance, saying he was in favor of "massive oil and gas and everything else and a lot of energy."