Accessibility links
A School's Way To Fight Phones In Class: Lock 'Em Up At a Boston charter school, administrators take students' phones and lock them in a soft pouch until the end of the day. "It sucks," grumbles one student. 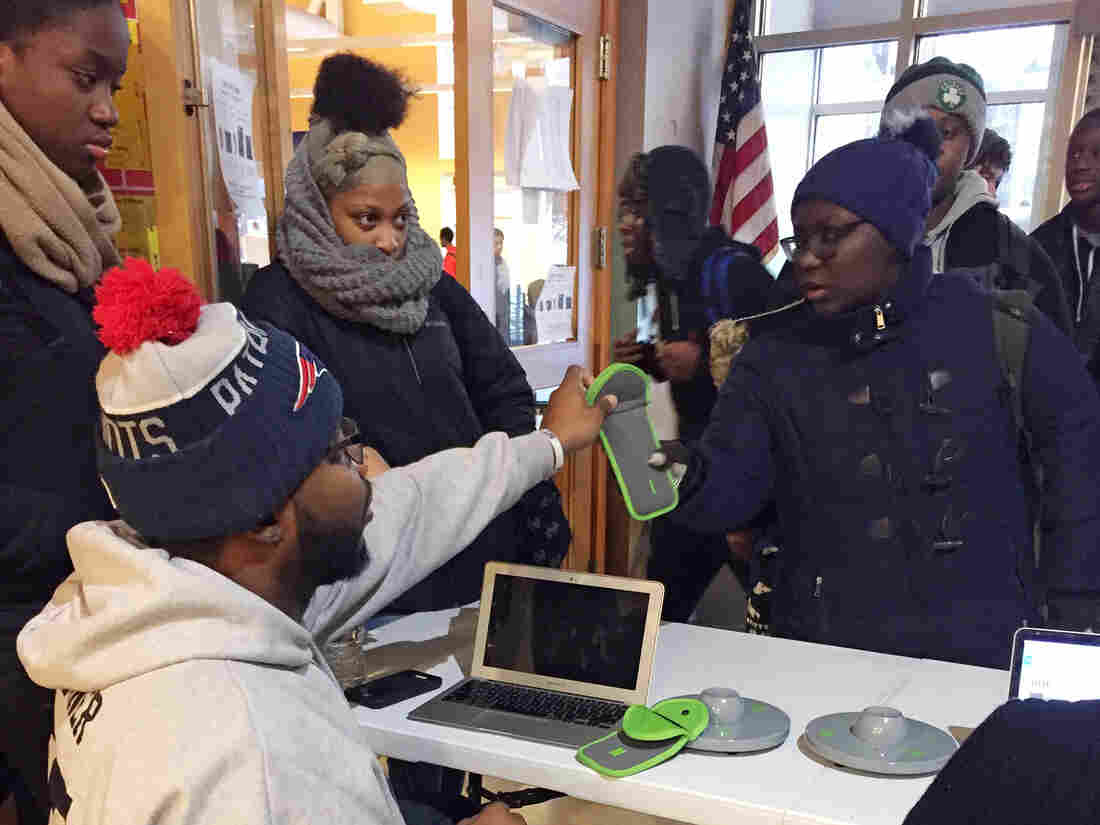 Ezzard Turner, a dean at the City on a Hill Circuit Street charter school in Boston, returns students' phones after locking them in pouches for the school day. A new policy at the school aims to literally contain distractions by requiring the phones to stay locked up until dismissal time. Tovia Smith/NPR hide caption 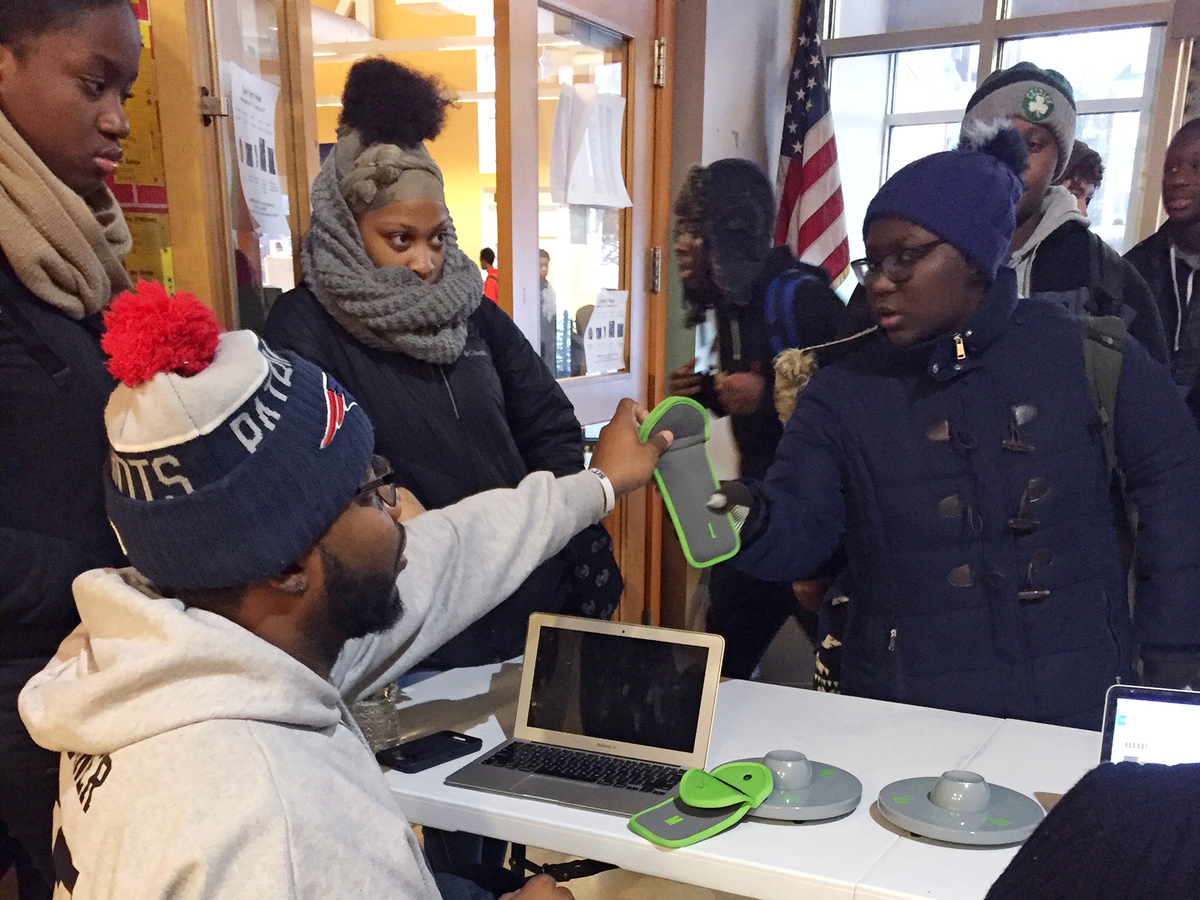 Ezzard Turner, a dean at the City on a Hill Circuit Street charter school in Boston, returns students' phones after locking them in pouches for the school day. A new policy at the school aims to literally contain distractions by requiring the phones to stay locked up until dismissal time.

Any teacher will tell you, class has never been the same since kids started coming to school with cellphones. Ancient Roman history will pretty much never win the day when competing with Snapchat and Instagram.

And sneaky as kids think they are, teachers know exactly what's going on when students look up with those zombie stares and constantly ask: "Can you say that again?"

"You can see that they're not listening to you," says history teacher Tony Patelis, at Newton North High School in Massachusetts. "They're looking down, and they tell me they're checking the time, even though the clock is on the wall."

Patelis says he's got a reputation as a "psycho about cellphones," constantly confiscating them from kids in class. "It's so ingrained," he says. "The kids say 'Forgive me, Mr. P. I can't help myself.' "

It's a daily battle, he sighs, and teachers are losing.

But now, exasperated teachers at hundreds of schools around the nation have another weapon in their arsenal.

At the City on a Hill Circuit Street charter school in Boston, students entering school in the morning are met by administrators fanned out at the front door with their hands out. One by one, they take students' phones, slip them into a soft pouch, and lock them closed with a snap that works like the security tags you find on clothing at department stores. Students take their pouched phones back, but can only unlock them with a special device at dismissal time, nearly eight hours later.

"It sucks," grumbles freshman Toninho Emanuel, echoing the sentiment of many here.

"It's aggravating," says sophomore Tyler Martin. "It's just like your toy and they take it from you and you can't use it." But in the next breath, Martin jumps off the toy analogy and says his phone is actually a necessity. "Like glasses," he says.

Freshman Rijkaard Trenteetun finds it demeaning. Instead of taking phones away, he says, schools should be guiding kids and empowering them to manage their phone use for themselves.

"This is a college prep school," Trenteetun says. "We should have responsibility ... to take care of ourselves. And if you want to use [your phone in class,] use it, but at the end of the day you're going to have the bad grade."

School principal DeOtis Williams Jr. has heard all the grousing and the arguments against locking up phones — and he says it's good for everyone to be having the conversation. But for now, he says he remains committed to the pouches.

"Like my mom always used to tell me, 'Kids know what they want but not what they need.' We know what the students need," he says. "[They] need to be present in the moment and to make healthy choices."

Williams says students have tried to hack the pouches, using tools and magnets to try to pry them open, or bringing decoy phones to pouch. Some have simply cut the bags open to free their phones.

But teachers say overall, compliance is improving since they started using the pouches this fall, and it seems to be paying off.

In teacher Joanie Decopain's math class, all eyes are on the board as the class tackles a really long algebra problem. Kids spit out the answers rapid fire, not even waiting to be called on.

Decopain says they're more engaged, and she spends much less time repeating herself. She says there's less pushback about the pouch policy, and some are even starting to see the virtue in it. Sort of. 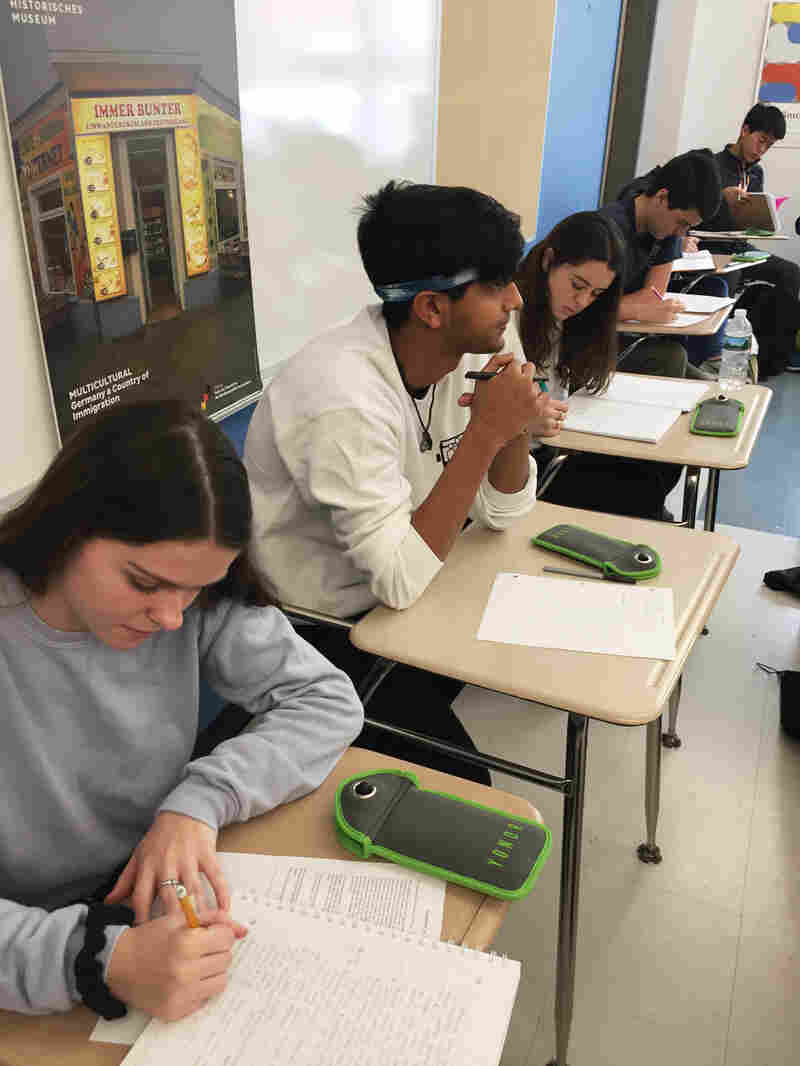 Students in one Newton North High School class are required to lock their phones in pouches during class, but many still keep them close for "comfort." Tovia Smith/NPR hide caption 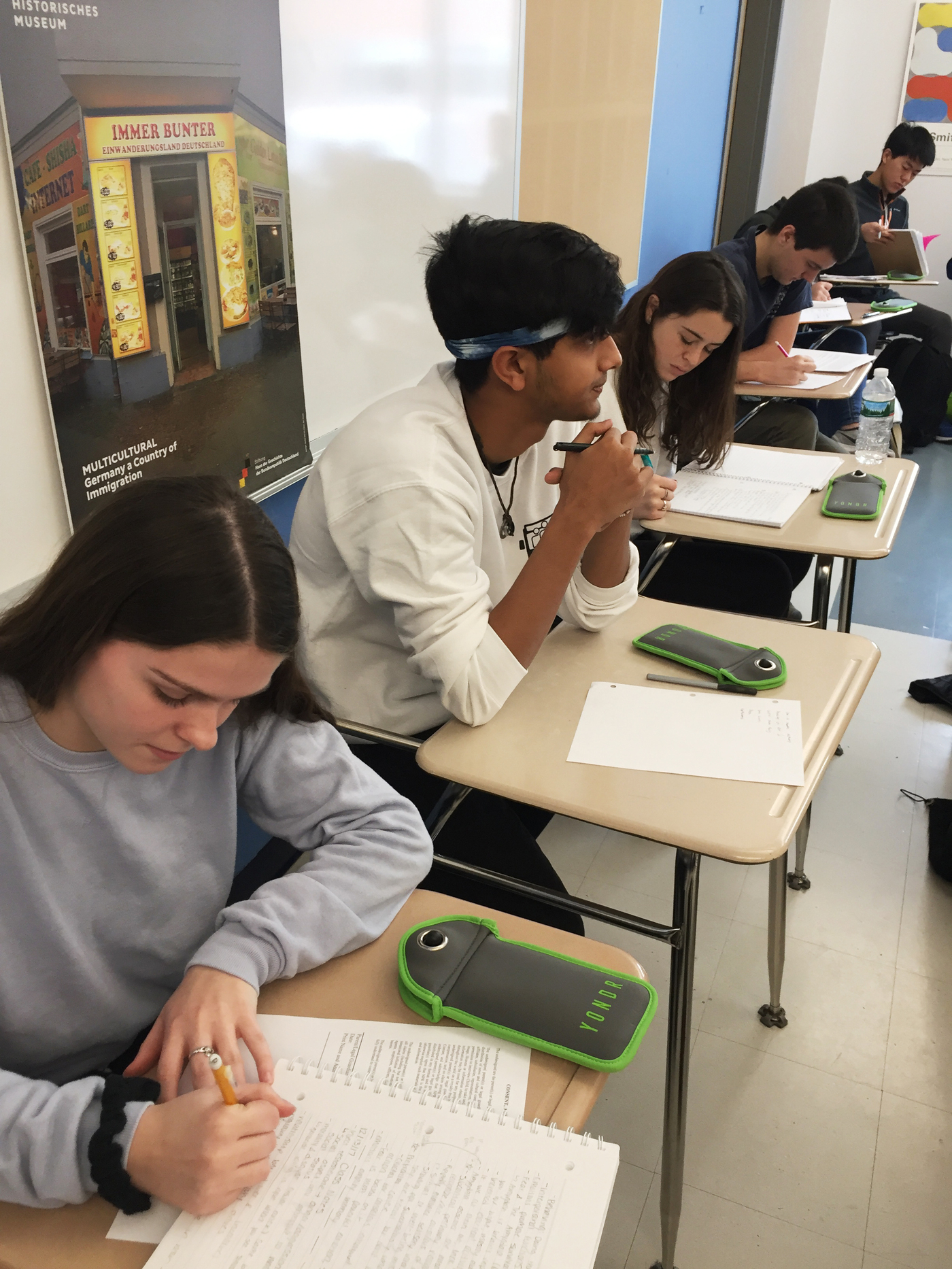 Students in one Newton North High School class are required to lock their phones in pouches during class, but many still keep them close for "comfort."

"The seniors are like 'I'm too big and bad for this,' " Decopain says. "They think that it's a good thing — but for other people, not them. So it's always like someone else needs the medication, not me."

There are, however, some brave souls, like senior Yalena Terrero Martinez, who admit they are less distracted during school, and even later at home.

"I don't reach for my phone as much," Martinez says. "Because if you don't feed into the habit, the habit eventually slows down."

"Oh my gosh, all my friends would be like on their phones during lunch, and I was just sitting there staring out the window, waiting for a conversation to spark up," she says. "But now, like, we talk a lot more."

That's exactly what the folks who make the pouches were hoping for.

Graham Dugoni founded the company Yondr four years ago, after he was annoyed by people using their phones at concerts. Turns out performers were, too, and now, hundreds of them, like Chris Rock, Alicia Keys and Ariana Grande have been forcing fans to lock up their phones. Or, as Dugoni would put it, freeing fans to really enjoy their shows. 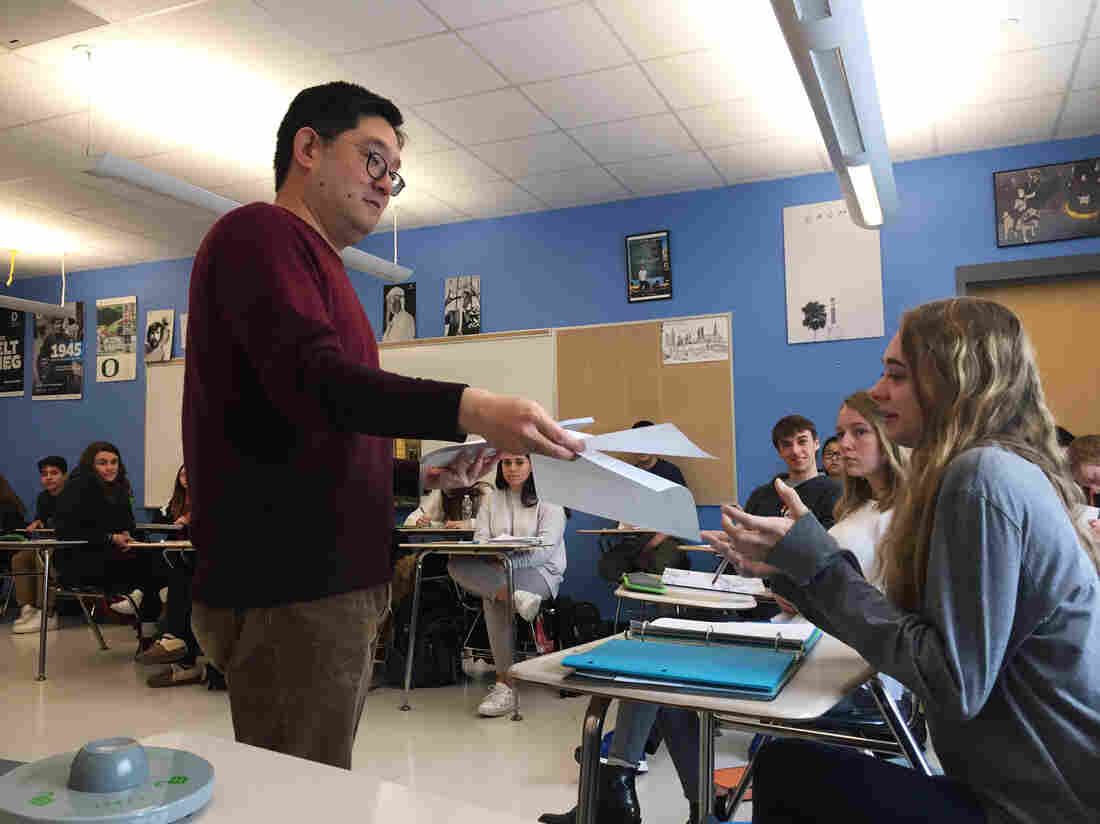 History and psychology teacher Albert Cho became the first, and still only, teacher at Newton North High School requiring students to lock their phone in a pouch during class. Tovia Smith/NPR hide caption 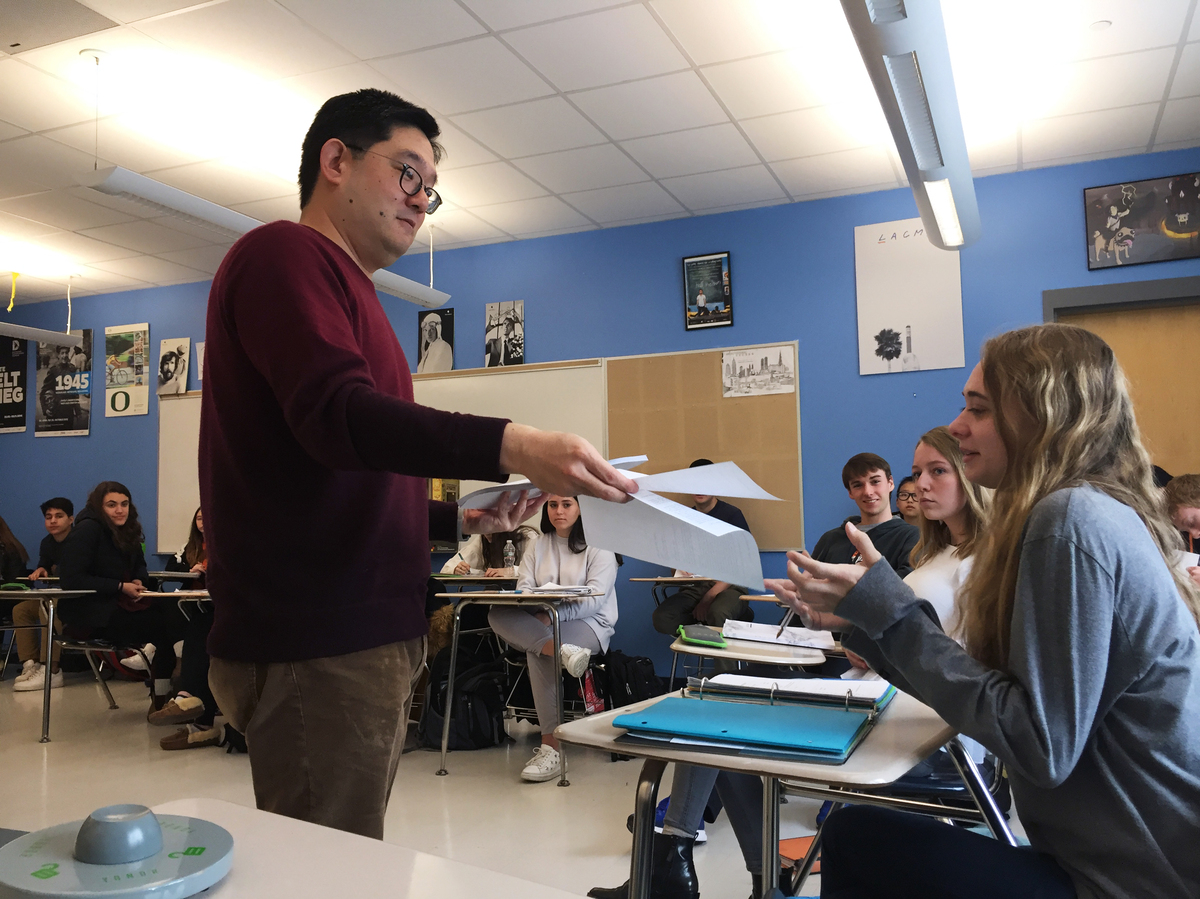 History and psychology teacher Albert Cho became the first, and still only, teacher at Newton North High School requiring students to lock their phone in a pouch during class.

"I see it all as part of a social movement," Dugoni says. "People are aware that something's out of whack, and they're looking for answers. There's a deep sense that the more efficient and faster everything gets in life, and easier, the more the meaning is being hollowed out."

Even wedding and bar mitzvah venues are beginning to rent the pouches. They cost about $2 each, per event, for the big performers. Schools can lease them by the year for $30 each, and Yondr says there are some 600 schools now signed up.

At Newton North High School, teacher Albert Cho swears by them. Rather than wait for his school to buy into the idea, he did it himself. He secured a grant to pay for the pouches and implemented the policy in his classroom only. Students pouch their phones as they enter the class and unlock them when it's over. He says they're now more engaged in discussions, connecting with each other more — and so is he, since he no longer needs to play phone police while he's trying to teach. And like the kids, he says, he's more conscious of how he himself uses the phone outside of class.

"During passing time, I [used to] take out my cellphone, and check my email, and not interact with the kids," he says. "So I think it's a good lesson."

But even a phone-free 45 minutes is a hard sell to some students. Sheil Mehta says requiring students to lock up their phones is unwarranted.

"I think our generation [is seen] as slaves to our phones," he says. "Like if you take away our phones, we'll all start eating each other. But I don't think we're really all like that."

Their protests, however, belie just how attached they actually are. Even with their phones locked in pouches, many students keep them on their laps, or clutched in their hands.

"I guess it's like sickly therapeutic in a way," says Carmen McAuliffe. "Because to me, just being able to feel it, I like am always pressing the button like even through the case. I just, like, have this need to do that."

As Evan Lipchin puts it, it's all about trying to avoid being bored. Kids want their phones close, he explains, just in case. As soon as there's a lull in the conversation, for example, "one person whips out their phone, and then someone else does and before you know it, we're all sitting around lunch on our phones."

Indeed, the moment his classmate starts to chime in in response, Lipchin looks down and starts fiddling with his pouched phone. Next thing you know, his phone is out and he's using it. "That was not on purpose," he says, laughing. "I was just fumbling around in my pocket and the lock undid. But I was just doing that instinctively; I wasn't even thinking about it."

Because students' attachment is that intense, some experts say cutting the cord cold turkey, and pouching phones during classes, may actually backfire.

"You're inducing massive anxiety," says California State University professor Larry Rosen. "You're going to get a group of people who really can't pay attention because that anxiety is an overriding feeling."

Rosen recommends what he calls a quick "tech break" — when teachers pause the class and allow students to check their phones. It could start with shorter intervals, like every 15 minutes, and gradually work up to every 30 minutes or more.

"You might lose a minute or two during the middle of class," Rosen says. "But what you gain in terms of their focus and attention is amazing."

Still, many teachers who've tried the cold turkey approach insist most teens have adapted better than they feared. When Joelle Renstrom, a lecturer at Boston University, tried the pouches, she surveyed her students at the beginning and end of the semester. She says even some who were grousing the most at the start surprised themselves by the end.

"A lot of times you have to live through a little bit of anxiety," she says. "And then you come out the other end and be like "Oh, so that was fine. It's going to be OK. I can do that.'"

Perhaps the most encouraging sign, Renstrom says, was when one of her students came back to class long after it had ended to look for her phone. She had so completely forgotten about it, she left class not realizing she didn't take it with her.

This story has been updated.