Accessibility links
Oprah Beats Trump In NPR Poll, But Most Americans Don't Want Her To Run The former talk show host and media mogul would beat President Trump by 11 points in a hypothetical 2020 matchup, but 54 percent of Americans say they don't want Winfrey to run for president. 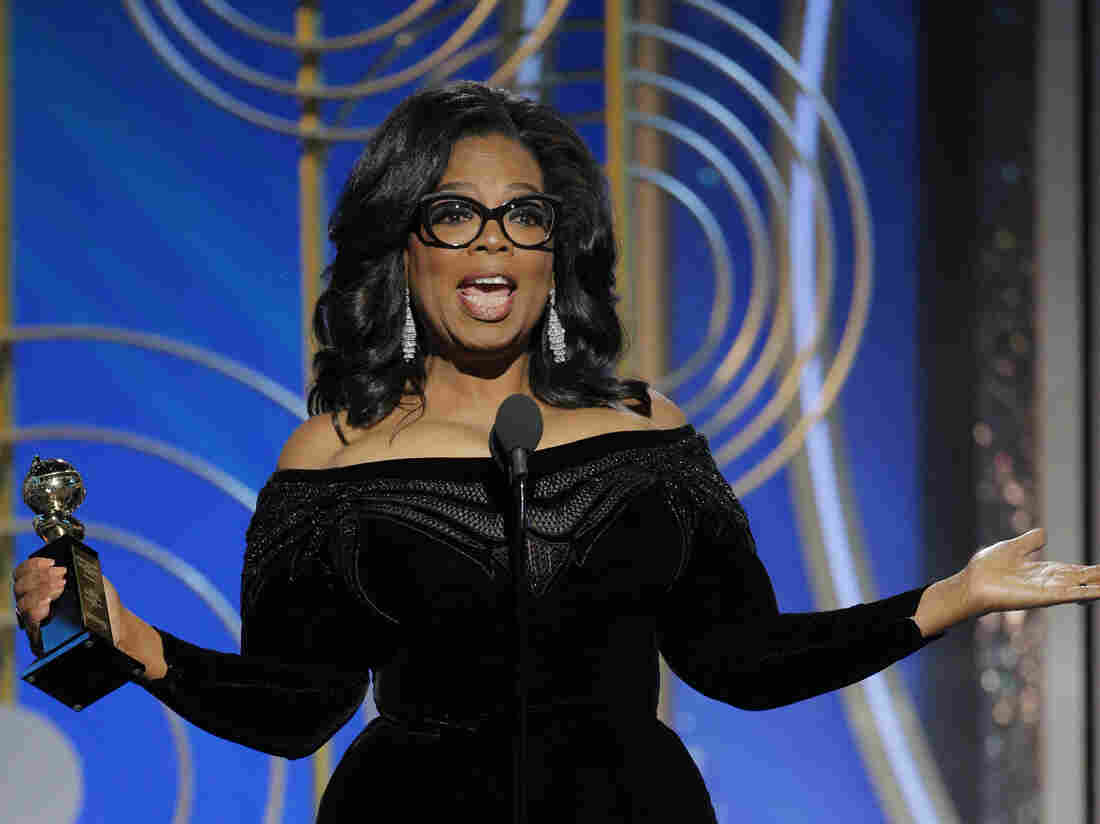 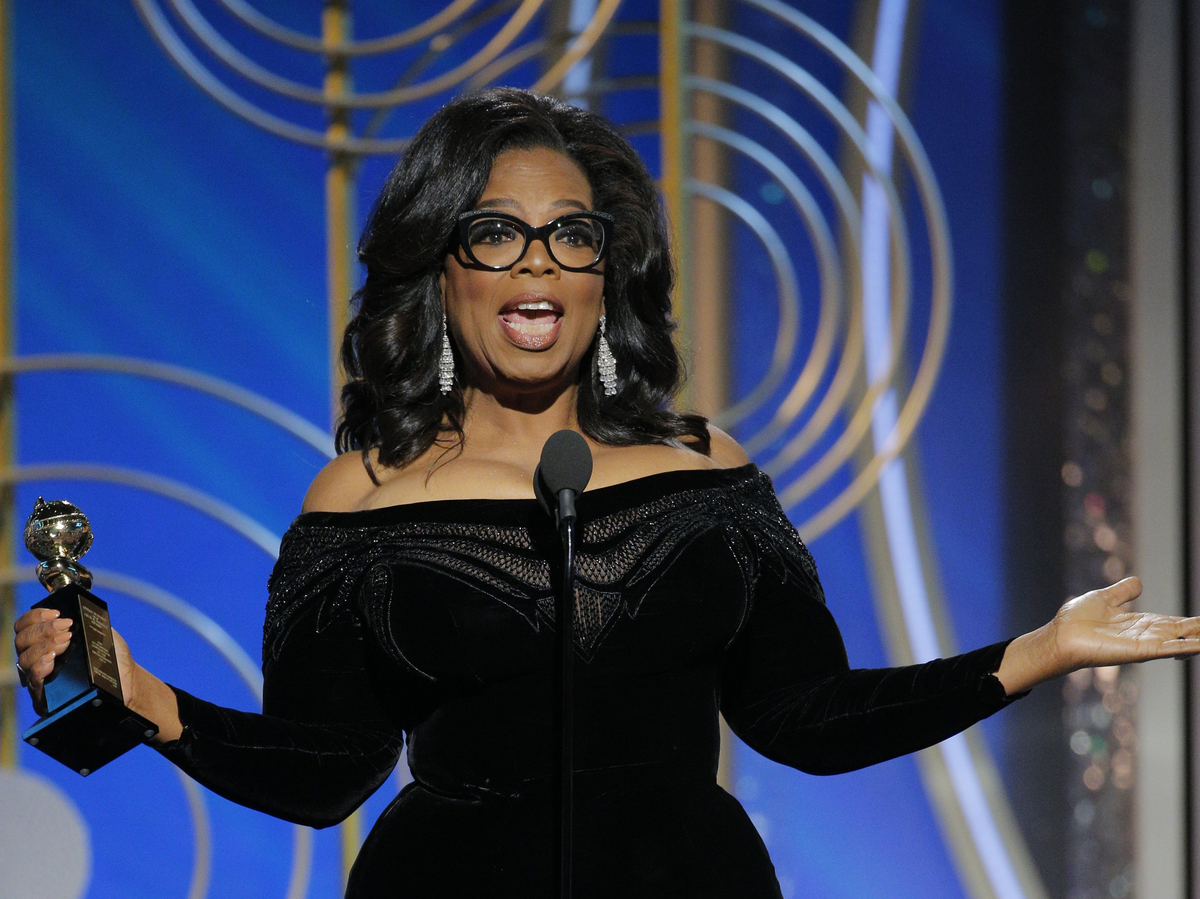 In a head-to-head matchup with President Trump, Winfrey would win 50 to 39 percent, according to a new NPR/PBS NewsHour/Marist poll. 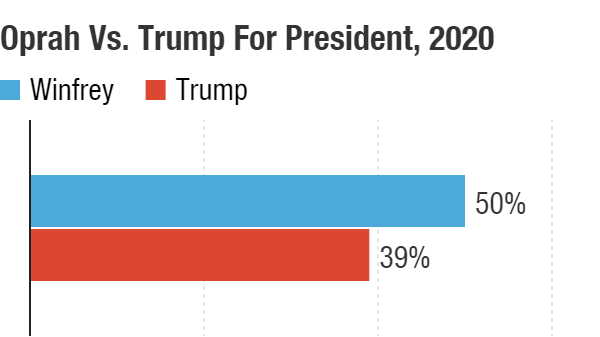 But when asked if they want Winfrey to run for president, a majority (54 percent) said they don't want her to do so, with 35 percent saying they do want her to run.

The ubiquitous former talk-show host, media mogul and actress spurred talk of a potential White House bid with a stirring speech at the Golden Globes on Sunday. The hashtag #Oprah2020 immediately began trending. Democratic strategists in Washington were impressed with her message, and even former Obama adviser Dan Pfeiffer tweeted that an Oprah 2020 run — and win — wasn't so crazy.

Clearly Winfrey has some big advantages — she has high name recognition, lots of money and is well liked. In fact, the NPR poll found almost two-thirds (64 percent) had a favorable view of Winfrey, while less than a quarter (23 percent) had an unfavorable one. 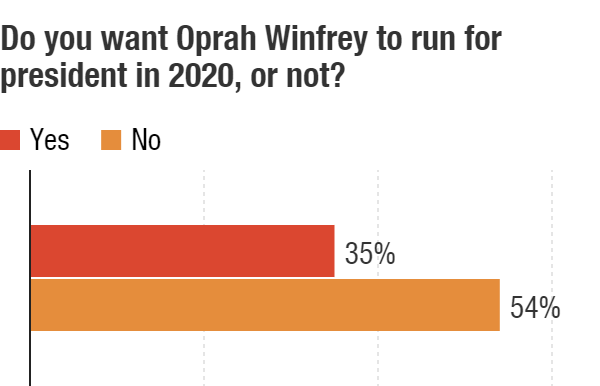 Even though people say they would vote for Winfrey over Trump, they aren't clamoring for her to run. In fact, a majority of Americans say she shouldn't. Domenico Montanaro/NPR hide caption

"People clearly like her, but do they want her to get mixed up in this rough and tumble world of politics, which has certainly gotten worse by the minute?" asked Lee Miringoff, director of the Marist Institute for Public Opinion. "That's not her style."

And as well as she's polling now, any time anyone gets involved in politics, they become a partisan target. Winfrey's favorability would likely suffer soon after she were to enter the political arena — and she's untested taking political heat. 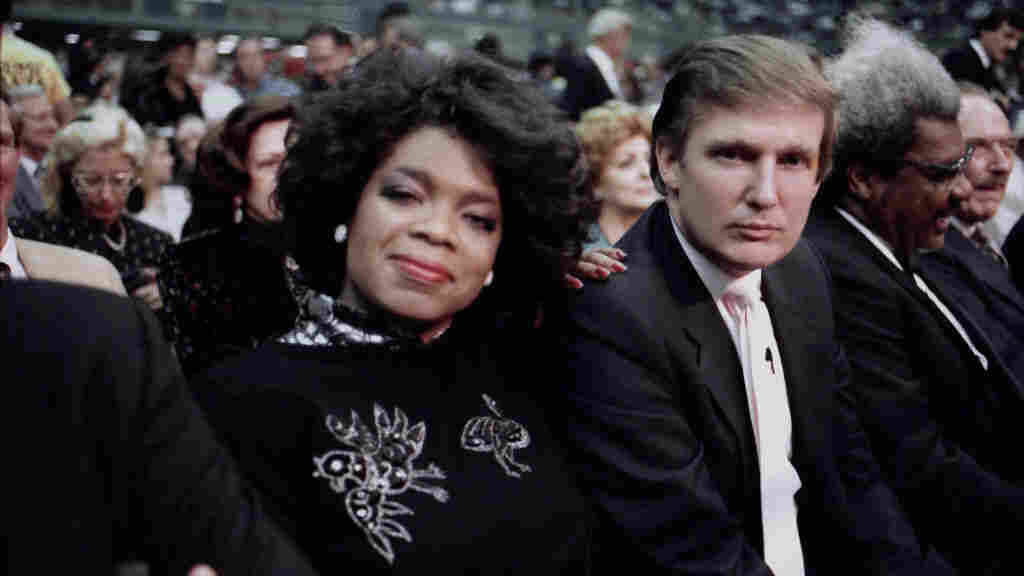 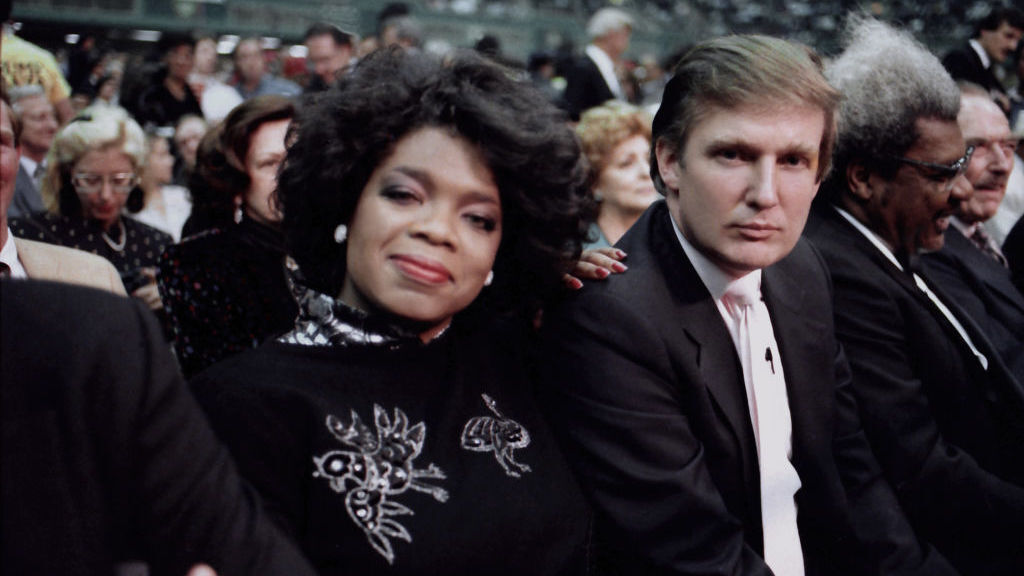 Donald Trump and Oprah Winfrey are seated ringside for a June 1988 boxing match in Atlantic City, N.J. When asked this week about a potential challenge from Winfrey in 2020, Trump responded, "Yeah, I'll beat Oprah."

Winfrey would win only 8 percent of Republicans, the same percentage Clinton won in 2016. (In addition, 7 percent of Trump supporters say they'd cross sides to back Winfrey.)

Winfrey does, however, win independents by 9 percentage points, 46 to 37 percent. In the 2016 presidential election, Trump won the group, 46 to 42, according to exit polls.

Views of Winfrey were likewise split along partisan lines — 89 percent of Democrats had a favorable view of her, while just 39 percent of Republicans did.

When it comes to whether she should run, not all Democrats were on board — 40 percent of Democrats said she shouldn't, compared with 47 percent who do. That could spell a potentially tough primary against a more politically qualified opponent.

Patrice Bennet-Adler of Daly City, Calif., is one of those Democrats who likes Winfrey but isn't eager for her to run for president. It's the same reason she didn't think Trump was qualified — neither has any past political experience.

Still, she would vote for Winfrey over Trump.

"Between the two, I'm more in alignment with her political and social views, so that's why I would choose her over him," said Bennet-Adler, 63. "She's not just a businessperson — she also appears to have a social conscious that I'm aligned with.

"But that doesn't mean that I think it would be a good idea for her to run for the highest public office in the country with no political experience." 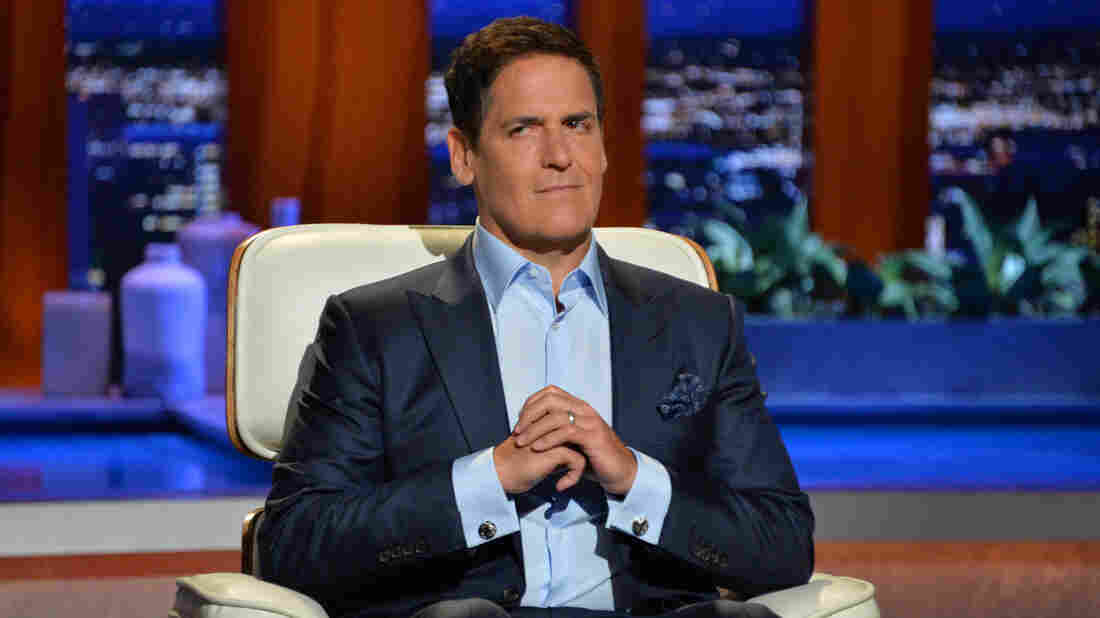 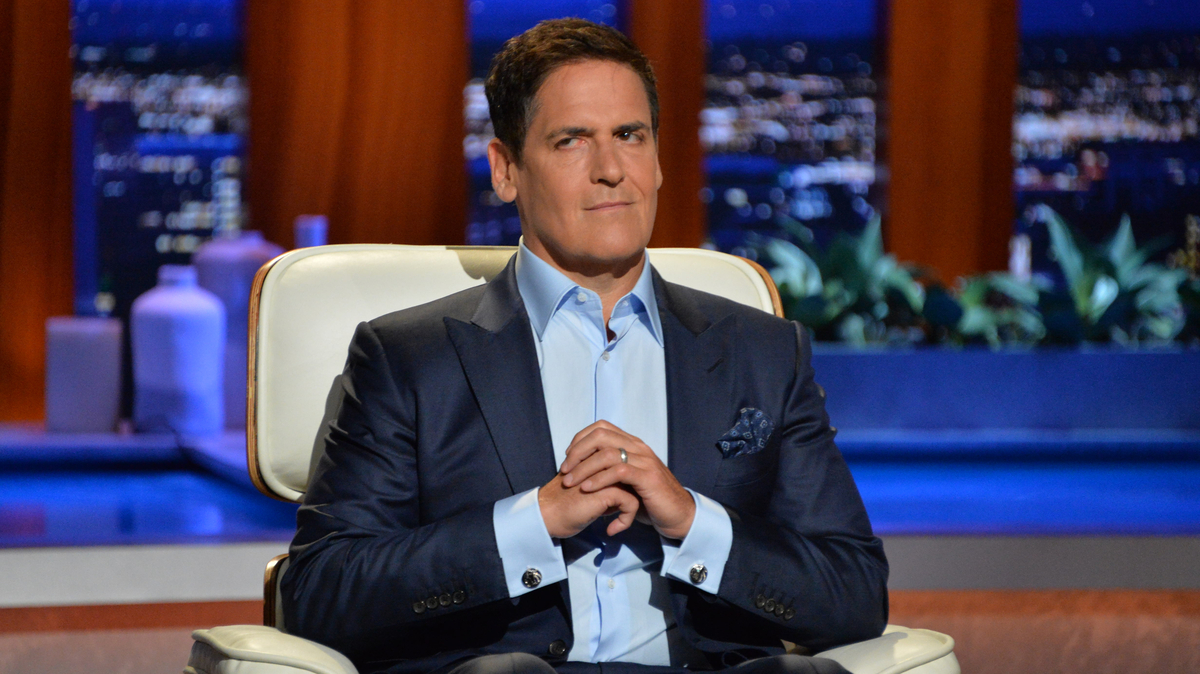 Concerns over a lack of experience may not bode well for other celebrities who may be flirting with a 2020 presidential bid either, such as Facebook CEO Mark Zuckerberg, Dallas Mavericks owner Mark Cuban, or even Dwyane "The Rock" Johnson.

"We always like outsiders," Miringoff said, "and those used to be governors. And now it's Donald Trump — the ultimate outsider. The question is, after Trump or against Trump, do we want someone who has executive experience in government?"

Or are we in a different time?

Taliv Campbell of Chesapeake, Va., said he thought Winfrey would bring a "change of pace" to the Oval Office if she ran.

"She's strong; she's a go-getter," said Campbell, 37. "I don't really know her political stances on certain things, but with how she operates in business, I'd trust her with what she could do."

And Jonathan Wells from Florence, Ala., pointed out that while Winfrey is a celebrity and a multimillionaire, she has a much different background than Trump.

Winfrey was born into poverty in Mississippi to a single mother, then lived a difficult upbringing in Milwaukee. She would eventually be raised, in part, by her grandmother. Winfrey has talked of being molested by relatives as a child and said she was raped by an uncle.

"Trump has been in a world where he was living with a silver spoon in his mouth from the time he was born up until now," said Wells, 21. "She's experienced the worst of what many Americans face. She knows what everyone goes through."

Winfrey could build a broad coalition if she did run — 87 percent of African-Americans line up behind her, along with 61 percent of Latinos. Women voters also break for her by an almost 2-to-1 margin.

White voters are split, with 45 percent saying they would vote for Trump and 44 percent for Winfrey. That would be an incredible accomplishment for a Democratic candidate — Clinton lost white voters by 20 points to Trump.

No Democratic candidate has gotten that high with whites since Bill Clinton's re-election in 1996. (Obama in 2008 came close with 43 percent in his landslide win.)

Trump does retain some advantages. Among white evangelical Christians, 68 percent would vote for Trump compared to just 22 percent for Winfrey.

Just over half of white noncollege graduates also back Trump, with 38 percent saying they'd back Winfrey. And Trump still carries almost half of male voters, with Winfrey getting 40 percent.

When asked this week about a potential challenge from Winfrey in 2020, Trump responded, "Yeah, I'll beat Oprah."