Accessibility links
Trump Uses Bully Pulpit To Support More Services For People Leaving Prisons Prisoners advocates expressed optimism after a White House meeting with the president. But the bipartisan effort to overhaul the way criminals are punished has downsized its goals in the Trump era. 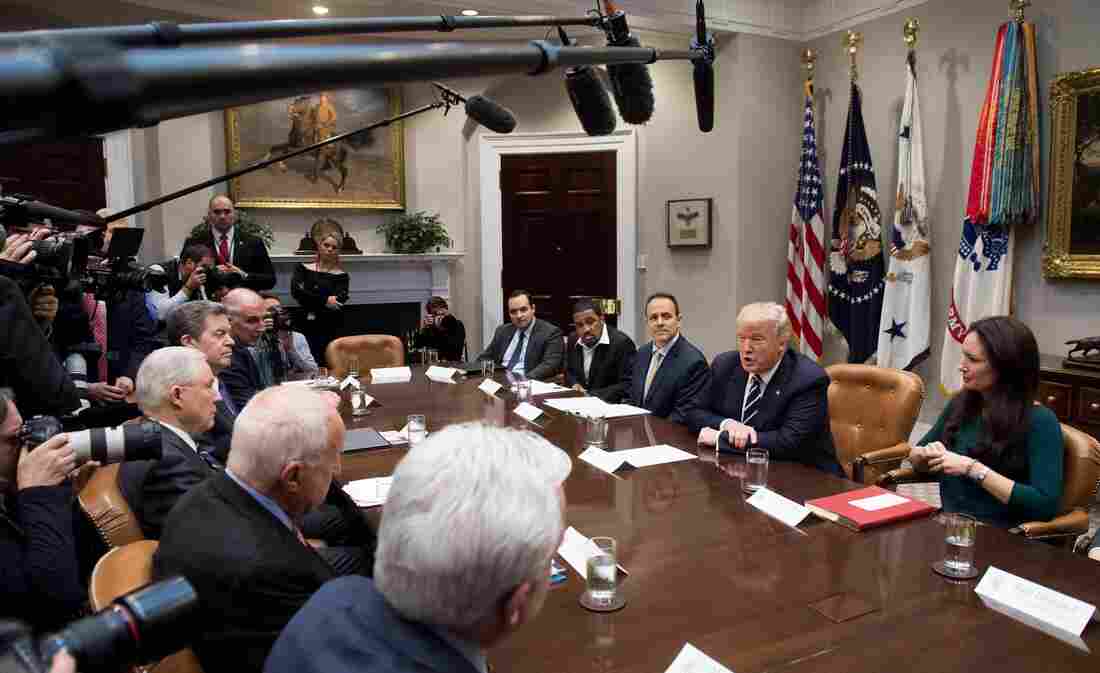 President Trump speaks during a meeting on services for people leaving prison in the Roosevelt Room of the White House on Thursday. Saul Loeb/AFP/Getty Images hide caption 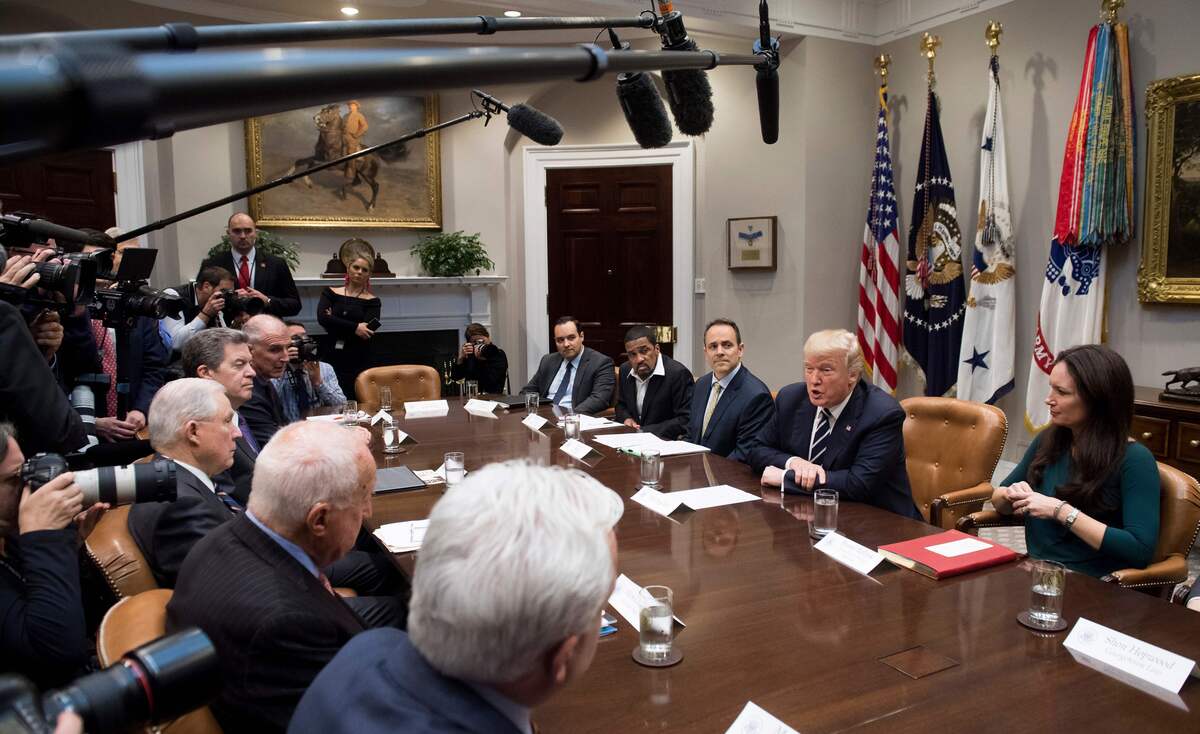 President Trump speaks during a meeting on services for people leaving prison in the Roosevelt Room of the White House on Thursday.

President Trump campaigned on a promise of law and order. He courted endorsements from police unions. And he even hinted to an audience of police officers that he supported the idea of roughing up suspects (the White House later said he was joking).

But on Thursday, the White House deployed the "bully pulpit" on behalf of a very different constituency: prisoners struggling when they return home.

At a roundtable with policy experts and elected officials, Trump expressed a desire to "break this vicious cycle" of inmates turning to crime when their lives outside prison prove too difficult. Justice Department statistics report that about two-thirds of the 650,000 people who leave the corrections system every year are arrested again — within three years.

"We have a great interest in helping them turn their lives around, get a second chance, and make our community safe," Trump said.

White House aide Jared Kushner, whose father served prison time, has led the way on these issues for months, convening listening sessions and meeting with advocates.

But Congress has failed to act on broader measures that would cut prison terms for drug offenders. House Speaker Paul Ryan, R-Wis., said he backs some changes to the system, a topic that came up at the Camp David retreat last weekend.

Still, it's not clear the Senate leadership will want to address the issue in 2018, a midterm election year.

A bipartisan effort that began under former President Barack Obama aimed to reshape everything from the way drug criminals are punished to conditions behind bars. Under Trump, it has downsized into an initiative that would provide more job training, education and mentoring opportunities as those same people prepare to leave prison.

Key Vacancies At Justice Department 'Not A Recipe For Good Government'

Mark Holden, chairman of the conservative Freedom Partners, said he came away from the White House meeting with a sense of optimism. Trump was an active participant in the session, staying for the whole 45-minute session and asking questions, he said.

"I saw some passion there," Holden said. "He seemed like he got the issue, understood it and connected with it."

Other attendees said the president paid close attention to the idea that states including Texas, South Carolina and Georgia have already overhauled their justice and correctional institutions, with some degree of success.

"I really think the White House is looking at lots of different avenues forward," from congressional action to executive orders, Rollins said.

Outside Congress, another possible obstacle is Attorney General Jeff Sessions, who as a U.S. senator routinely criticized proposals that would grant leniency to drug offenders.

At the Justice Department, Sessions directed prosecutors to bring the most serious charges they could prove against any defendant, rescinding a policy that gave individual prosecutors more discretion. He also signaled he would make use of private prisons, a break from the Obama administration.

Sessions attended the White House meeting Thursday, when he suggested he might be open to compromise on modest ideas such as job training.

"The president talking about prison reform is a good thing," said Kevin Ring, leader of Families Against Mandatory Minimums, which supports inmates and their families.

But FAMM also has recently warned about changes to prison policies during the Trump administration that mean inmates are spending less time in halfway houses and getting less access to services they need.