Accessibility links
CIA Calendar Art Offers A Glimpse Into The World Of Spies Oil paintings on display at CIA headquarters — and therefore invisible to the public — can now be seen in a collection of wall calendars. They depict declassified missions from the agency's past. 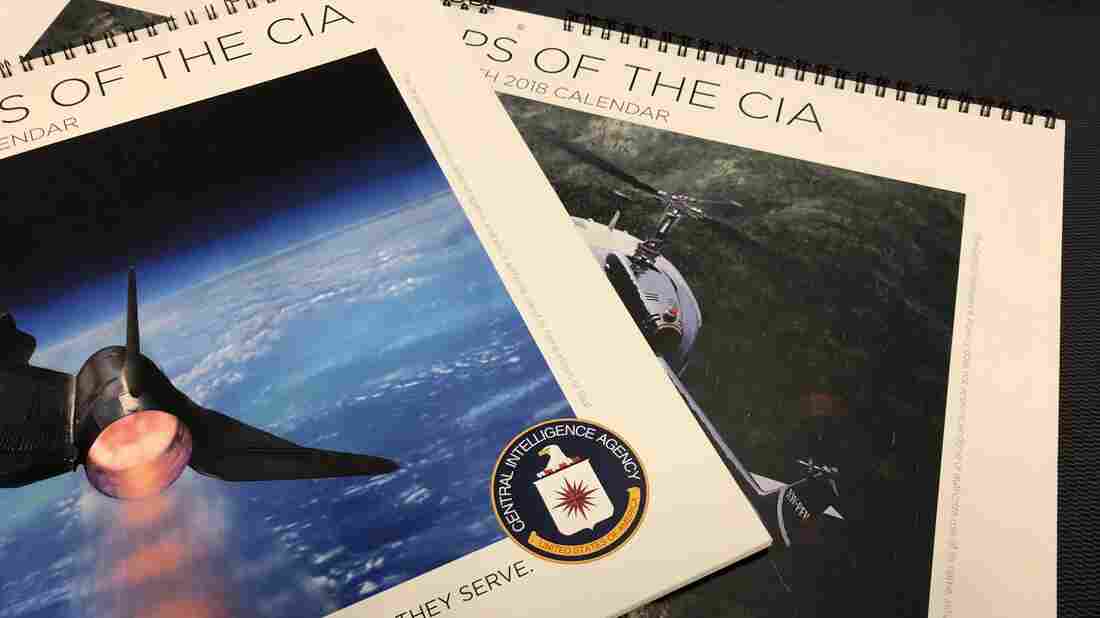 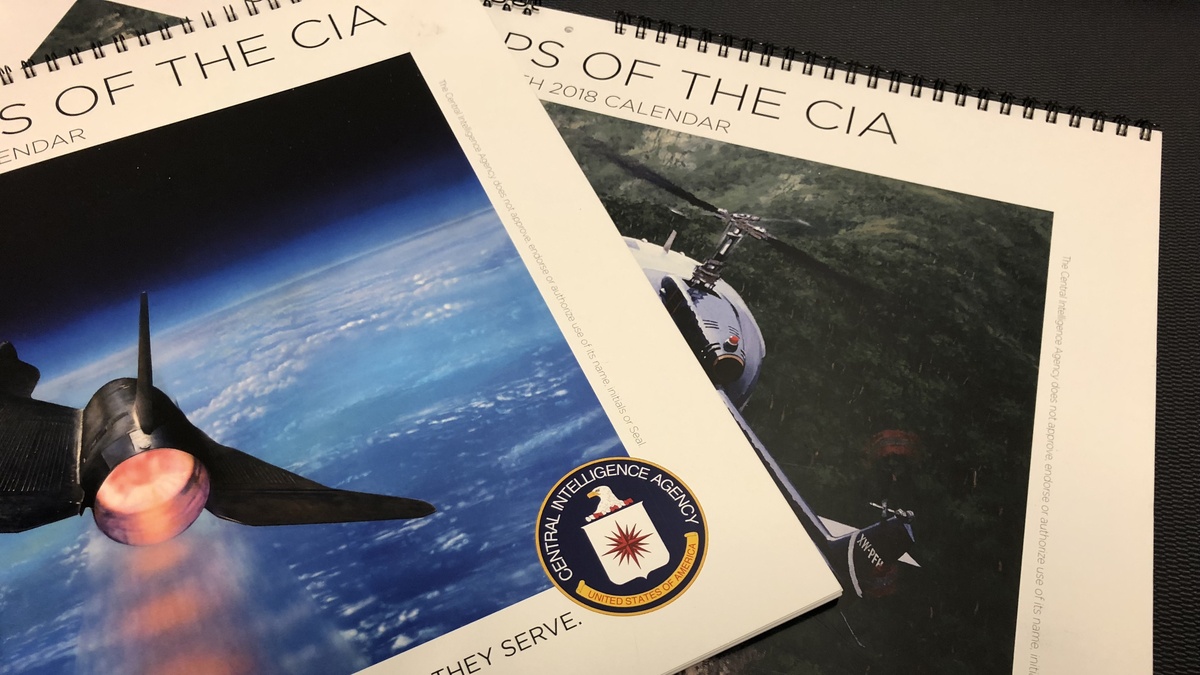 Secret Ops of the CIA and Secret Aviation Ops of the CIA wall calendars contain paintings depicting declassified spy missions from the agency's past. The original paintings are displayed at CIA headquarters in Virginia.

A new year means it's time for new calendars. And a North Carolina man has created some of the most unusual you'll ever see.

In fact, they show scenes you once weren't supposed to see — official CIA paintings of past spy missions.

They include a depiction of a spy with a rifle shooting down an airplane from a helicopter, and images of two missions in which planes tried to snatch agents off the ground without landing.

There wasn't such a thing as CIA art until Erik Kirzinger, a former logger, fly-fishing guide and cowhand, came up with the idea to commission some for CIA headquarters in Northern Virginia.

"The idea being that when you looked at the collection from one end of the hall to the other it would tell the visual history of the CIA one mission at a time," said Kirzinger.

His motivation was personal. Kirzinger's uncle was a CIA contract pilot who was killed in 1952 on a mission in China — one of those that involved trying to pick up an agent without landing.

In the late 1990s, Kirzinger's mother asked him to try to get his uncle's remains back.

"In order for that to happen, the CIA had to declassify his mission and then they had to share the mission coordinates with the Department of State, which would raise the issue with their Chinese counterparts," he said.

Not so simple, of course. But he wrote then-CIA director George Tenet, who eventually invited Kirzinger to the agency's headquarters for an annual ceremony honoring operatives killed in the line of duty.

"And then when he was describing what the men and women were up to when they were killed, I had these visual images of their missions," Kirzinger said.

He began working with the agency to select declassified missions that were suitable, find donors to pay for the paintings and commission the artists. 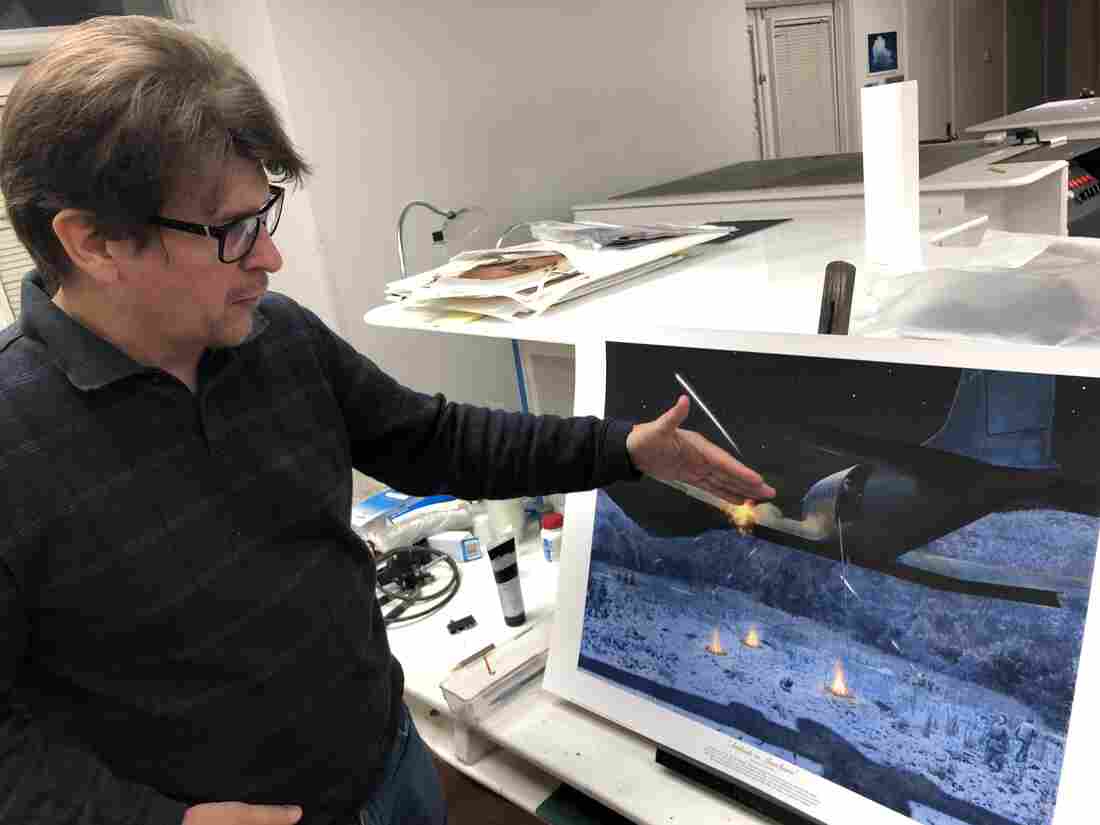 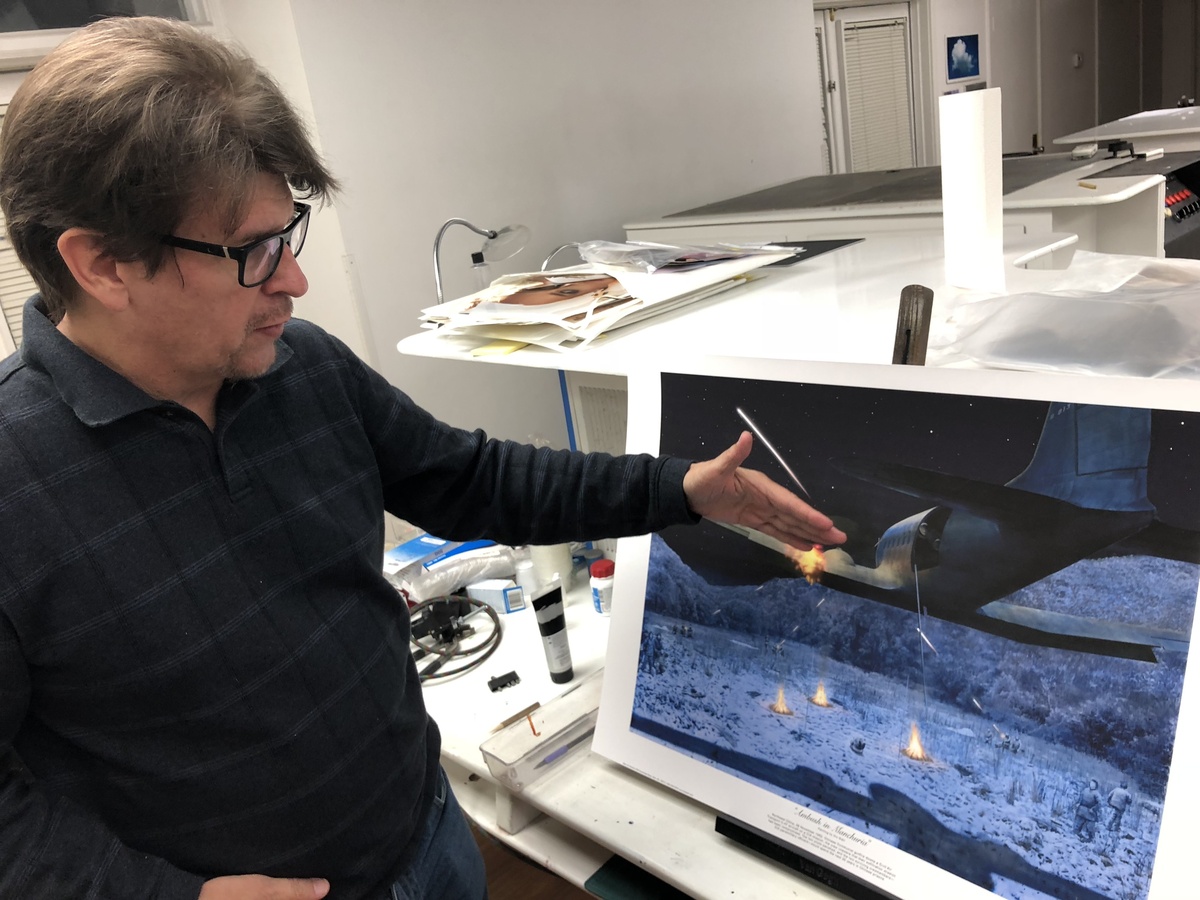 South Carolina artist Dru Blair shows a print of his painting of a 1952 CIA operation in China in which U.S. two pilots were killed. Blair painted several paintings for the agency's official collection.

One of the artists was Dru Blair, who was known for his aviation paintings and now owns an art school in South Carolina.

Blair said researching and planning the paintings was almost as complicated as some of the missions themselves. Some subjects took years of effort. The CIA helped with things like official accounts and photos of pertinent equipment.

The artists consulted old weather data, checked the location of the sun during a mission and sometimes interviewed surviving spies and other witnesses.

In one case, a museum director in Alabama used heavy equipment to raise the rear of the same type of transport plane depicted in the painting of the mission in which Kirzinger's uncle was killed. That allowed Blair to see the plane as it would appear from another aircraft, behind and beneath.

Blair's painting shows the cargo plane flying close to the ground, taking fire from the Chinese machine gunners who shot it down. Two crewmen stand in an open side door.

"The two guys in the back were manning the machinery and equipment that were going to winch this guy off the ground," Blair said.

The plane flew toward two poles sticking up from the ground, with a line strung from the top of one pole to the other. The line was designed to be attached to a harness around the agent's body. As the plane flew past, it dangled a hook that snagged the line. The crew was then supposed to winch the line, dragging the agent aboard.

"That's the stuff you see in a James Bond movie, but they actually use that in reality to lift people," Blair said. "To extract them, basically, from a dangerous zone."

But the Chinese had captured the spy team on the ground and lured the plane into an ambush. Both pilots died, and the two crew members were held in Chinese prisons for two decades.

Blair was able to talk with them to get vital details for the painting, such as how the foliage looked.

He also had to carefully study the weird spy-snatching equipment.

A later version of the equipment that used balloons rather than poles to lift the line from the ground is shown in another of the paintings. It depicts a 1962 operation dubbed "Cold Feet" that was more successful than the Manchurian mission.

Russian scientists had been forced to hastily abandon an Arctic research station when the ice under it began cracking. The CIA dropped in two agents to scoop up as many secrets as they could, and then a plane snatched them off the ice.

Blair says he felt the weight of history and the obligation to get even small details right when planning the paintings. In one case, the CIA had to declassify the flight manual for a spy plane so that he could see the instrument panel for that type of aircraft.

"There were no photographs of them," Blair said, "and with the constant updating of parts of everything, there was not a single example of that aircraft configuration in existence."

Eventually, Kirzinger bowed out of helping organize new artwork for CIA headquarters, and the agency began paying for new paintings itself. But he got the idea to put the art into calendars so that people who don't get a chance to roam the halls of CIA headquarters — meaning most of us — can see it.

The idea of CIA art may seem odd. But it's part of a tradition. The Army, Marine Corps, Navy, Air Force and Coast Guard all have collections. Their art depicts a range of military scenes: famous battles at sea and on land, famous soldiers and anonymous troops. There are cartoons and paintings by famous artists, including Norman Rockwell.

"There are thousands of pieces in these collections," said Victor Youritzin, a professor emeritus at the University of Oklahoma School of Visual Arts. "They're huge. That's something I think many people in this country are not aware of."

Youritzin spent years poring over the thousands of pieces of art in the various collections of the U.S. military, and he organized a show of some of the best ones. Few art experts have seen as many paintings with national security themes as Youritzin.

But even he was caught a little off guard by what Kirzinger got started.

"I was not aware the CIA had an art collection," Youritzin said, laughing.

Hardly anyone was. But now anyone can see the paintings. And flip to a new one each month.