Accessibility links
The Russia Investigations: Bannon Comes In From The Cold, Trump Wavers On Mueller Exiled from Trump world, Steve Bannon is headed to the House Intelligence Committee. The president might talk to Mueller — or not. And Sen. Feinstein released a big transcript over GOP objections. 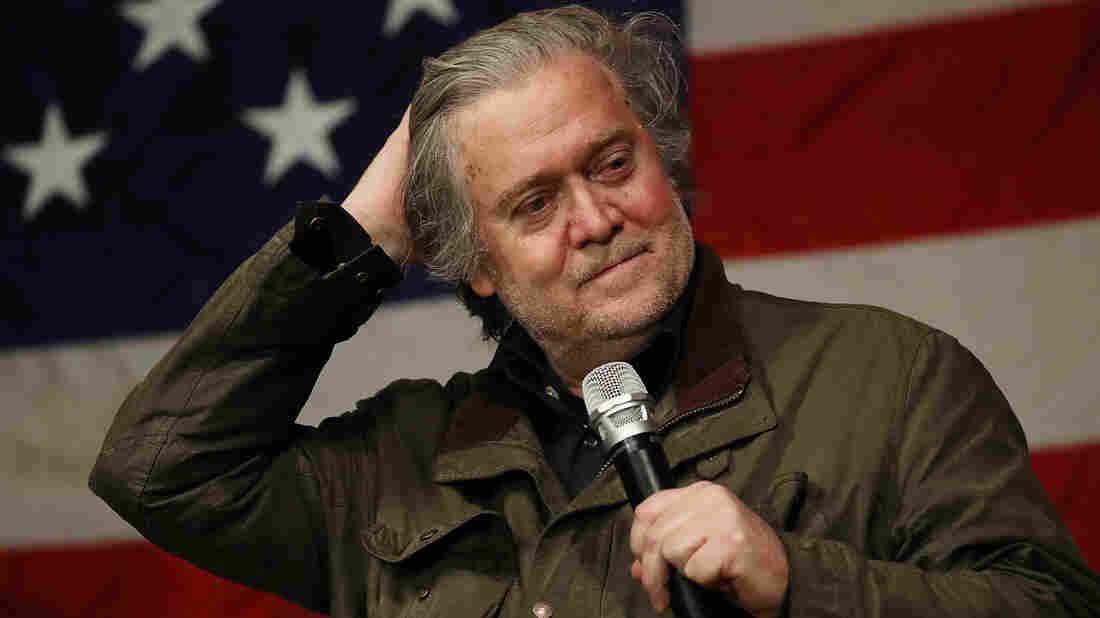 Steve Bannon speaks before introducing Republican senatorial candidate Roy Moore in December in Fairhope, Ala. Bannon now finds himself on the outs with the conservative website he once led and the White House administration where he had been a key player. Joe Raedle/Getty Images hide caption 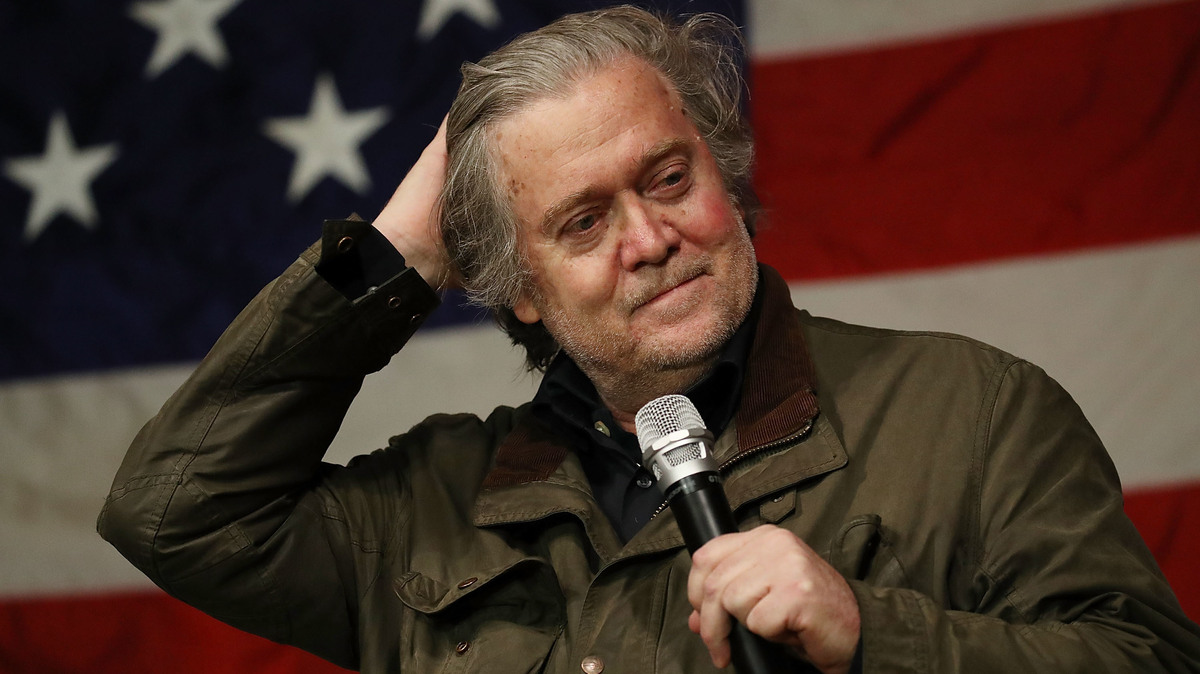 Steve Bannon speaks before introducing Republican senatorial candidate Roy Moore in December in Fairhope, Ala. Bannon now finds himself on the outs with the conservative website he once led and the White House administration where he had been a key player.

This week in the Russia investigations: President Trump rows back on a potential Robert Mueller interview, Sen. Dianne Feinstein releases a big transcript, and Steve Bannon is headed to the House Intelligence Committee.

Once upon a time, Steve Bannon was among the princes of the universe. Loved by his allies and hated by his foes, he was, most importantly, feared by both.

Now, however, the prince has been brought low. A whirlwind reversal left his battlements in ruins and Bannon himself cast out of his own realm, friendless. With no radio show, no billionaire patrons and no access to the president he helped get elected, Bannon has found himself adrift on an iceberg in the night.

It is this Bannon — not the colossus, but the castaway — who is set to testify next week before the House Intelligence Committee about the Russia imbroglio. It is this Bannon who has made it clear that he thinks the much-discussed June 2016 Trump Tower meeting may have been "treasonous" and who broached the prospect that Donald Trump Jr. may have set up personal contact between his father, then a presidential candidate, and a Russian delegation arranged by Moscow.

Bannon even stood by the T-word when he attempted to apologize and reingratiate himself with the White House — what he meant, he later told Axios, was that Trump campaign chairman Paul Manafort, who was also part of the Trump Tower meeting, had been "treasonous," not Trump Jr.

That didn't cut any ice with the president, but members of Congress will likely be quite interested in hearing the full story.

Bannon has been contemptuous about the prospect that people in Trump World conspired with the Russians in the 2016 election. He has, however, retained the same attorney to represent him for his House testimony as had former White House chief of staff Reince Priebus and White House counsel Don McGahn, Rosalind S. Helderman reported for The Washington Post.

There is no way to know whether the substance of Bannon's testimony might become public — to say nothing about whether a full transcript might appear — but Democrats want more T-bombs for the record that they can dribble into the press.

Republicans, however, could have even more to gain.

Many of the events of the 2016 campaign that Bannon has spoken about, plus overtures from Russians to Trump advisers and other events, took place before he boarded the Trump Train. So if Republicans can establish that Bannon has just been repeating what is essentially hearsay — or even better for them politically, he admits he was speculating — that could mean another big twist in this saga.

Would President Trump give evidence to Justice Department special counsel Robert Mueller? Last summer, he said, "100 percent." On Wednesday, he was not so categorical.

Trump responded to a question from a reporter by saying that because there was "no collusion" between his campaign and the Russians who attacked the 2016 election, there might not be any need for him to talk to Mueller, as NPR's Scott Horsley reported.

"Certainly, I'll see what happens," Trump said. "But when they have no collusion, and nobody's found any collusion at any level, it seems unlikely that you'd even have an interview."

A Trump interview with Mueller's team is one of those things in the Russia saga that everyone discusses but no one knows about — except the principals. Does all this chatter mean Mueller is getting close to asking? And does that mean the investigation is winding up? Or are Trump's attorneys trying to reassure the president by originating those rumors so he'll see them on TV?

Wherever it's all coming from, the discussion of a Trump-Mueller interview has prompted the next obvious questions: Should Trump agree to one if asked? What if Mueller uses a subpoena? If the president goes along, how aggressively should the Trump legal team set the conditions? Should Trump give written answers? Should they ask that Trump not be under oath? Should they ask for a time limit?

Or should Trump invoke his Fifth Amendment right not to talk to Mueller because he might incriminate himself? 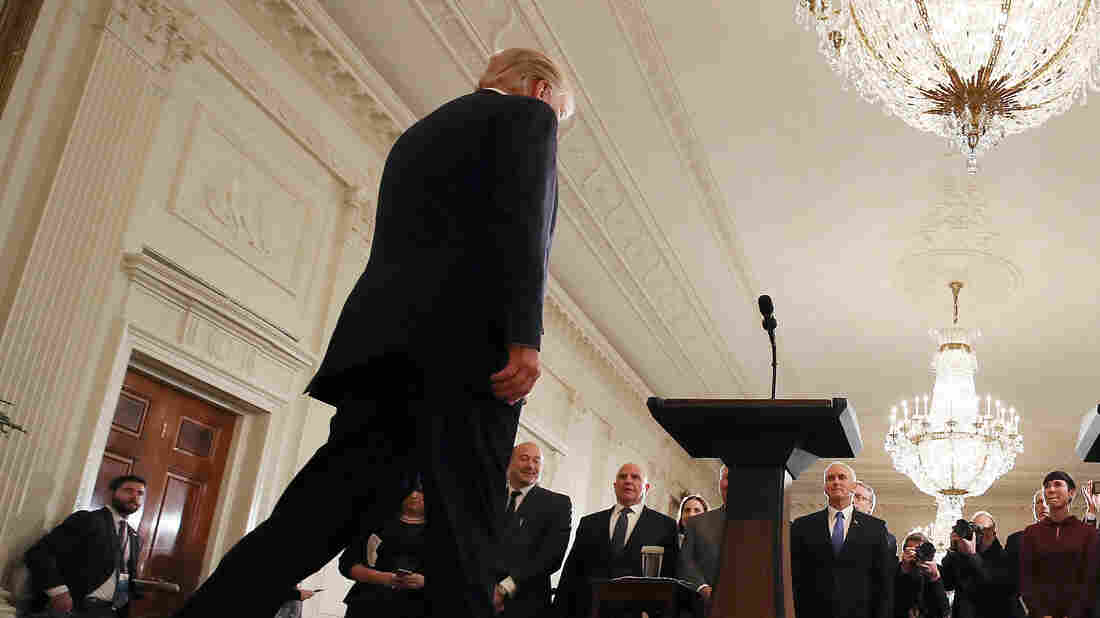 President Donald Trump walks up to speak to the media with Prime Minister Erna Solberg of Norway at the White House, on January 10, 2018. Mark Wilson/Getty Images hide caption 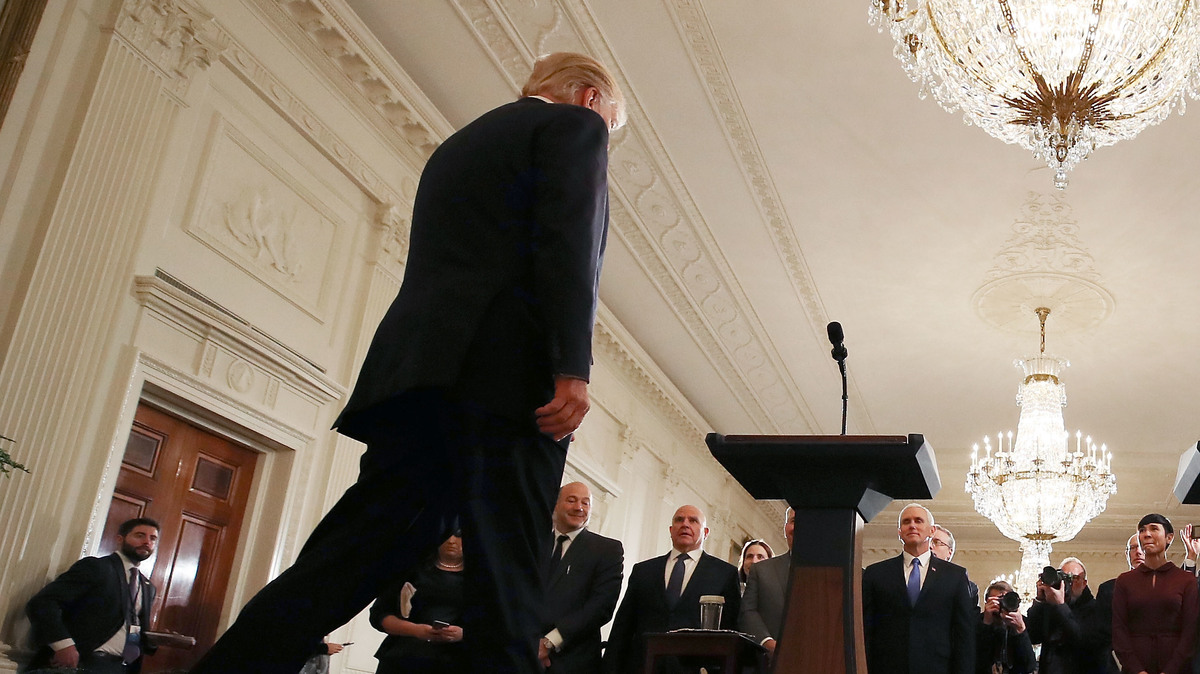 President Donald Trump walks up to speak to the media with Prime Minister Erna Solberg of Norway at the White House, on January 10, 2018.

That is the course many lawyers might recommend because it would keep Mueller's attorneys, investigators, stenographers and all the other potentially nettlesome guests safely away from the president. But how would Trump, Republicans and their supporters handle the political consequences of the president ceasing to cooperate after the White House has been touting its cooperation all along?

In the legal world, invoking the right not to testify isn't supposed to viewed as an indication of guilt. But in the political world, it can be viewed as tantamount to an admission of guilt — as it has been by Trump and aides in the past.

What does it all mean? The choice is difficult for the president and his legal advisers. But one way it might make political sense is for Trump to take advantage of all the political preparation done by Republicans in their attacks on the FBI and Justice Department — that it's full of Democrats and "biased" against him. Why bother cooperating with Mueller, Trump could argue, when he would never get a fair hearing?

Precedent, on the other hand, appears to be on Mueller's side. As NPR's Brian Naylor reported, a Trump interview with the special counsel's office would be in keeping with the conduct of his Oval Office predecessors.

The allegations about Donald Trump uncovered by the former British intelligence officer Christopher Steele surprised him so much that he acted on his own to report them to the FBI, according to the man who commissioned his work. Glenn Simpson, whose political research shop hired Steele, told the Senate Judiciary Committee that Steele felt like a man driving to work who witnessed an accident.

NPR has not detailed the contents of the much-discussed dossier because it remains unverified. It describes a concerted effort by powerful Russians to build connections with Trump's campaign, an effort Steele found so alarming that Simpson said he worried Trump was being "blackmailed."

Sen. Dianne Feinstein, D-Calif., the ranking member on the Senate Judiciary Committee, released the transcript of Simpson's testimony from back in August over the objections of the committee's Republican majority. Why does it matter? In part because the account Simpson gave undercuts Republicans' attack line about Simpson's political research firm Fusion GPS, Steele and the dossier. In the GOP construction, Democrats paid to scare up tittle-tattle used to spur a "biased" FBI into launching a scurrilous witch hunt into Trump World. All the same, Democrats and the Hillary Clinton campaign did underwrite Simpson's work for a time after the original backer, a conservative media outlet, walked away. And a senior FBI investigator on Mueller's team did send anti-Trump text messages to another FBI employee during the presidential campaign. So the "biased inquisitor" narrative is unlikely to go away — and, in fact, it may get a renaissance following the possible release by the Justice Department of more text messages.

In fact, Republicans retain a broader political position of strength in their ability to use their majorities in Congress to control the Capitol Hill investigations into the Russia imbroglio. The Senate Judiciary panel's chairman, Sen. Chuck Grassley, R-Iowa, issued a "criminal referral" for Steele based on what he said were "false statements" by Steele. But the details are secret. With these and other such documents, Grassley and allies like Sen. Lindsey Graham, R-S.C., seemingly hold all the cards.