Accessibility links
Blaming Democrats, Trump Says 'DACA Is Probably Dead' With four days left before a government shutdown, lawmakers appear to be far from a deal to fix the DACA program. Trump denied the vulgarities he reportedly made about immigrants: "I'm not a racist." 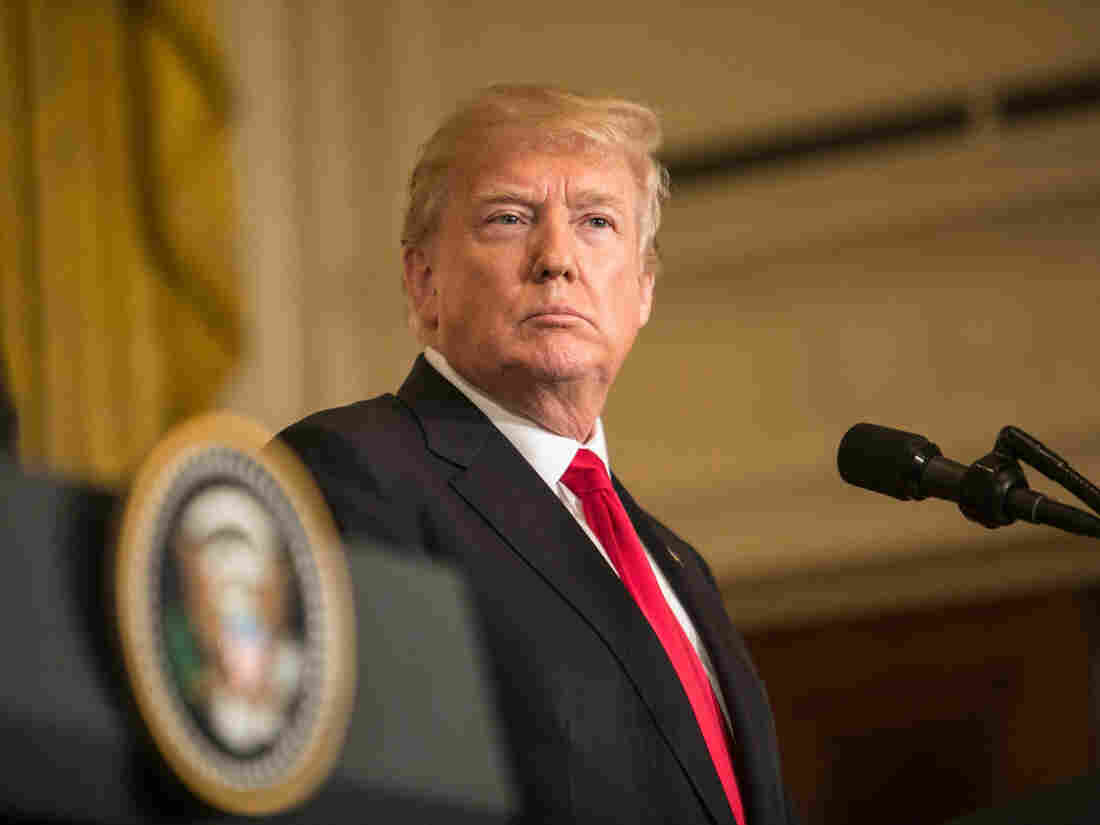 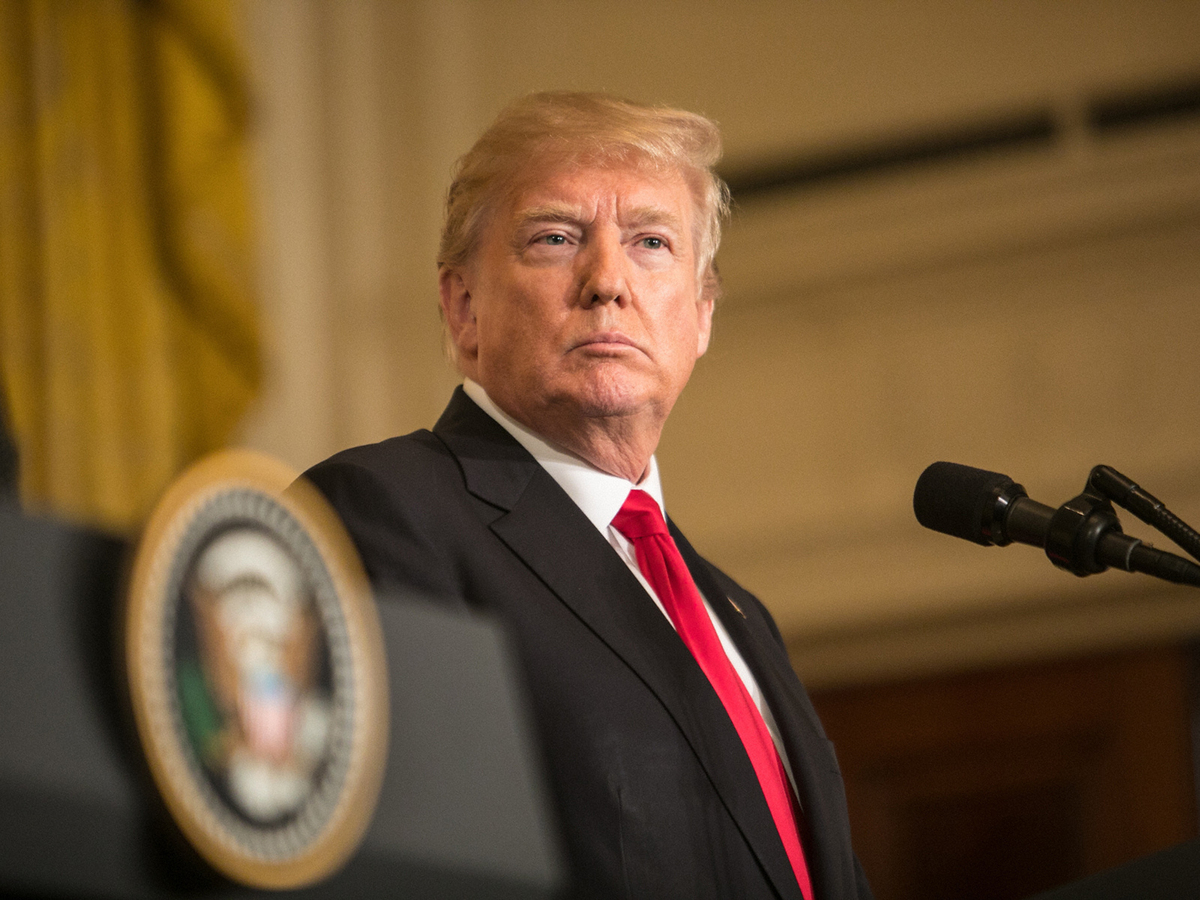 President Donald Trump tweeted Sunday that Democrats don't really want DACA and they want to "take desperately needed money away from our Military."

Hours after the U.S. government announced it would again begin processing renewal applications for the Deferred Action for Childhood Arrivals due to a federal court order, President Trump claimed that the program — which has granted a temporary legal reprieve to people who were brought to the U.S. illegally as children — was "probably dead."

The furor Trump ignited with his reported use of a vulgarity about African nations in a meeting with lawmakers last week about DACA consumed the Sunday talk shows just days before the federal government is due to shut down absent a fresh congressional spending bill.

Trump sought to focus the blame for any lack of progress on DACA on Democrats, tweeting: "DACA is probably dead because the Democrats don't really want it, they just want to talk and take desperately needed money away from our Military."

DACA is probably dead because the Democrats don’t really want it, they just want to talk and take desperately needed money away from our Military.

As NPR and other outlets reported last week, it was Trump who rejected a tentative agreement reached by a small, bipartisan group of senators that would have allowed DACA recipients permanent residency in the U.S. and a path to citizenship. During a meeting with the lawmakers, Trump reportedly called African nations "shithole countries" and questioned why the U.S. didn't favor letting more immigrants in from nations like Norway instead of countries like Haiti.

Two of Trump's congressional allies who were present at that meeting sought to push a different version of events during appearances on the Sunday talk shows.

On ABC's "This Week" Sen. David Perdue, R-Ga., said Trump, "did not use that word," and that multiple media accounts of the meeting were a "gross misrepresentation." Perdue's comments were a shift. In an interview on Friday, Perdue had said he didn't remember the president using such language. "I didn't hear that word either," said Arkansas Sen. Tom Cotton in an interview on CBS's "Face the Nation" with host John Dickerson.

On Sunday evening, Trump was pressed on the issue upon arriving at his West Palm Beach golf resort where he was to have dinner with House Majority Leader Kevin McCarthy.

Trump said the derogatory comments attributed to him last week never happened. "Did you see what various senators in the room said about my comments? They were not made," he told the press pool.

Asked about charges of racism for his alleged slur, Trump said: "I'm not a racist. I am the least racist person you have ever interviewed."

Regarding DACA, the president reiterated that he was working toward a deal, but that Democrats were not helping. "Honestly, I don't think the Democrats want to make a deal," he told reporters at the Trump International Golf Course. "We have a lot of sticking points, but they are all Democrat sticking points."

Trump said he hoped there wouldn't be a government shutdown. "I don't know if there is going to be a shutdown," he said. "There shouldn't be because if there is our military gets hurt very badly. We cannot let our military be hurt."

Meanwhile, the U.S. Citizenship and Immigration Services announced Saturday it would begin taking renewal applications from undocumented immigrants seeking to register for the DACA program.

In a statement, the agency said, "Until further notice, and unless otherwise provided in this guidance, the DACA policy will be operated on the terms in place before it was rescinded."

President Trump ordered an end to the program in September and gave lawmakers until March of this year to come up with a legislative fix. Last week, a federal court in California issued a nationwide injunction blocking the Trump administration's decision.

In another tweet Sunday, Trump said he wants people coming to the country "based on merit." He said:

"I, as President, want people coming into our Country who are going to help us become strong and great again, people coming in through a system based on MERIT. No more Lotteries! #AMERICA FIRST"

A CBS News poll released Sunday found that 70 percent of Americans are in favor of DACA and even among Trump's supporters, a slim majority also support the program.