Accessibility links
Recy Taylor's Rape, Investigated by Rosa Parks, Still Haunts Us After Her Death At the Golden Globes, Oprah Winfrey told the story of Recy Taylor's rape in 1944. Taylor died last month at 97. NPR's Michel Martin reflects on their 2011 interview and why her story still haunts us. 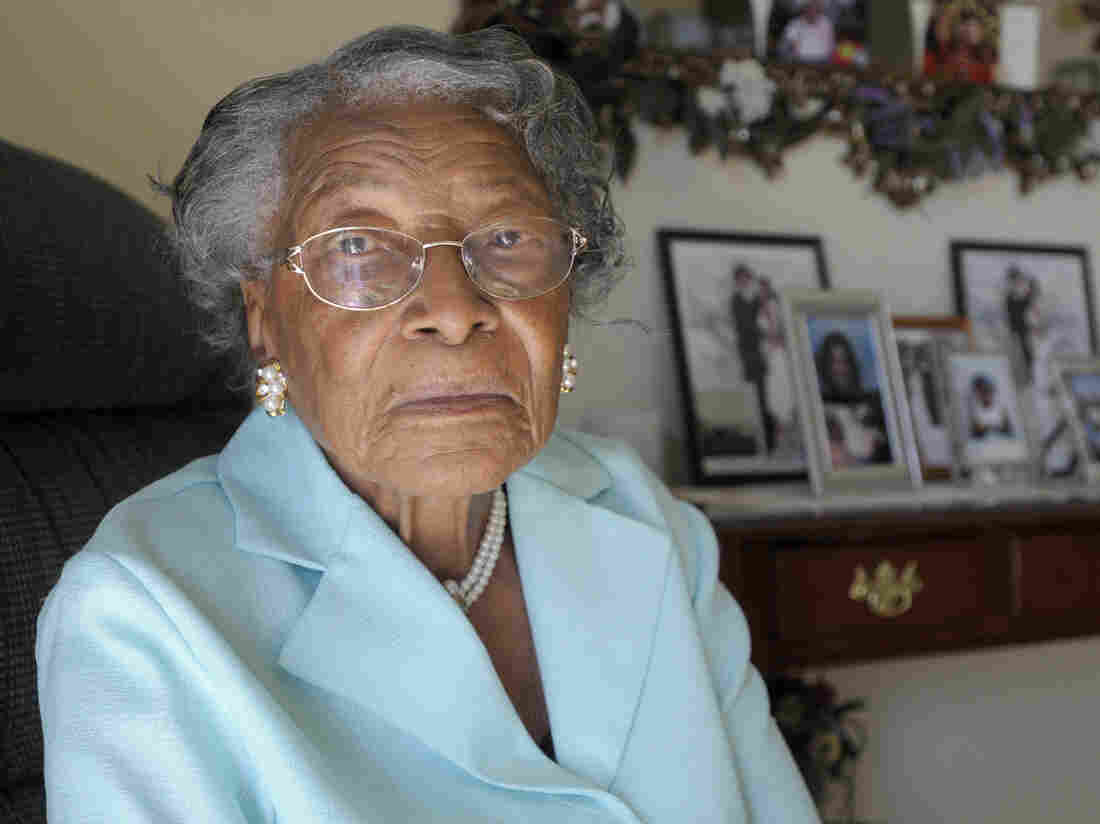 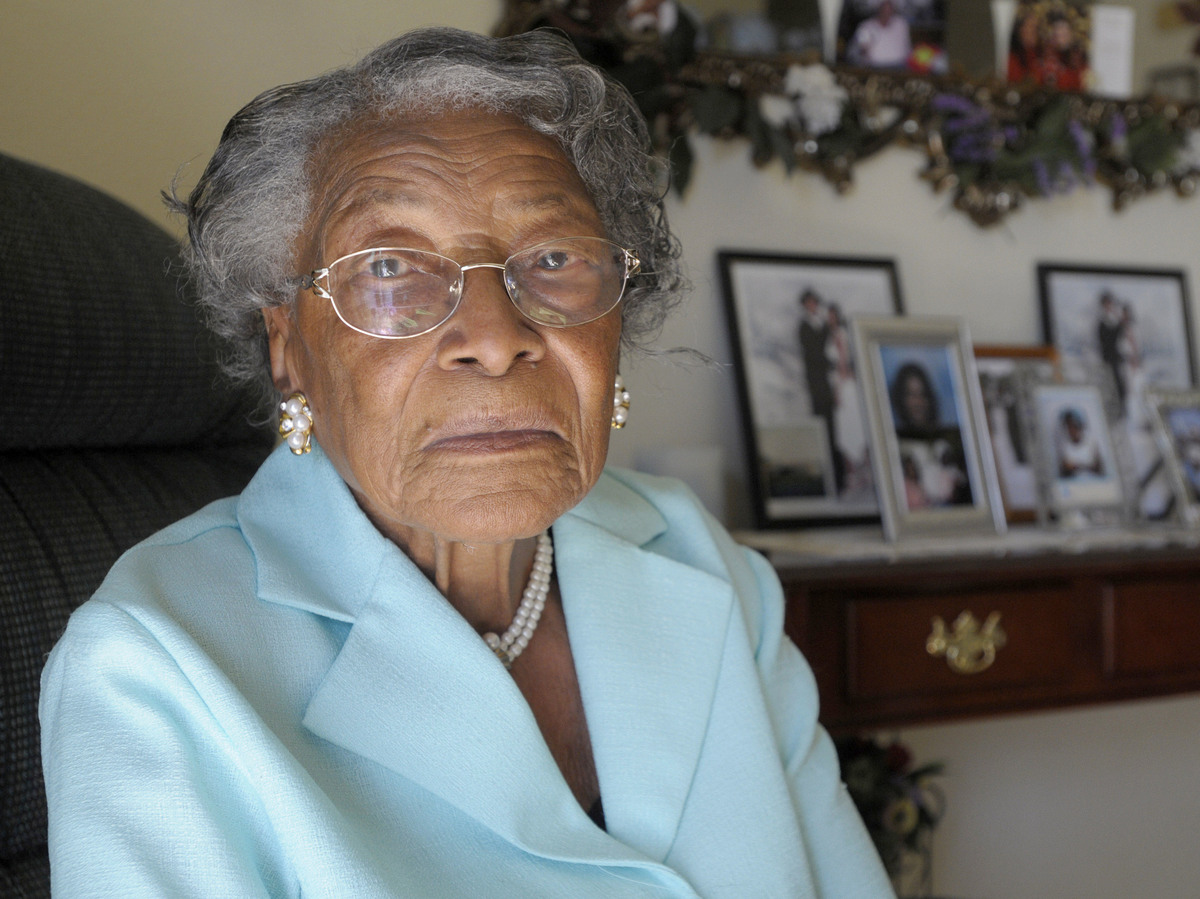 In a speech at the Golden Globes, Oprah Winfrey told the story of Recy Taylor's violent rape by six white men in 1944. Taylor, pictured above, died last month at age 97. Her attackers were never prosecuted.

Last week, Oprah Winfrey's speech at the Golden Globes brought many in the audience to tears and to their feet. She was accepting an award for contributions to the world of entertainment, but the billionaire broadcaster and philanthropist decided to use her moment to tell the story of a far less celebrated woman: Recy Taylor.

"In 1944 Recy Taylor was a young wife and mother, she was just walking home from a church service she'd attended in Abbeville, Alabama, when she was abducted by six white men, raped and left blindfolded by the side of the road coming home from church," Winfrey recounted on stage.

Later, a colleague reminded me that I had spoken with Taylor myself, with the help of historian Danielle McGuire, back in 2011. Taylor told me the story of that rape in her own words.

"They got me in the car and carried me straight through the woods," she said. Afterward, they told her that if she told anyone they would kill her.

In her speech, Winfrey added another important element to the story.

"Her story was reported to the NAACP where a young worker by the name of Rosa Parks became the lead investigator on her case, and together they sought justice. But justice wasn't an option in the era of Jim Crow. The men who tried to destroy her were never prosecuted," Winfrey said.

In 2011, I asked Taylor how that felt — never getting justice.

"They didn't try to do nothing about it. I just get upset because I do my best to be nice to people, because I don't want people to mistreat me and do me any kind of way," she said.

Let me add a few more details that Winfrey did not have time to tell, such as how the local sheriff knew who had kidnapped Taylor but never arrested them. Or that one of the seven accomplices admitted he was there, but claimed he was just a bystander. Or the fact that eventually four of the accomplices admitted what they had done but claimed the rape was — wait for it — consensual.

There is also the way that some of the major Southern newspapers at the time all but ignored the crime against Taylor until national pressure forced their hands, or, just as evil, were complicit in passing along the false story that she was a prostitute or a willing participant.

Is it any wonder that when, after a campaign of local and national pressure finally led authorities to act, two all-white male grand juries refused to hold anyone accountable?

Taylor's story haunts us — in part because of how she carried her pain with a strength we could still hear in her voice, but also because it is the story of many women whose names we will never know. But we know her name because she would not be kept silent. And also because another woman, Rosa Parks, along with many men, amplified her voice.

How Recy Taylor Spoke Out Against Her Rape, Decades Before #MeToo

Can I just tell you, Taylor's story also haunts us because it is the story of many others, a few of whose names we now know and many we do not. It is the story of the men who raped her and the community and the country who raised them and shaped them.

I wonder about those young men. Did they hold doors open for their white mothers and sisters? Did they call them "ma'am" and "sister?" Did they marry and have daughters and dance at their weddings and worry about them when they came home late? I bet they did. I bet they had friends and jobs and people who spoke nice words about them at their funerals. Made excuses. Said everybody did it. It's how we were raised. It's just what we thought. We didn't know it was wrong.

But they did know. At their core they had to know, because they, like Taylor, were human beings. And in treating Taylor as less than human, in refusing to recognize her as human, they left a piece of themselves on the floor of those woods where they attacked her. I would venture to say that all those who dehumanize others for the sake of their own pleasure or to protect their own power leave a piece of themselves behind as well.

To my knowledge, Taylor, who died last month just a few days shy of her 98th birthday, outlived her attackers. She died with her humanity intact. How many others will be able to say the same?