Accessibility links
Chris Christie Leaves Office After Losing Favor Over Bridgegate, Trump Support Christie's popularity soared during his first term as New Jersey governor because of his tell-it-like-it-is attitude. But scandals and his focus on the national spotlight lost him favor at home.

Chris Christie delivers his final state of the state address in Trenton on Jan. 9.

New Jersey Gov. Chris Christie, whose popularity soared during his first term but then fell from grace, leaves office Tuesday.

The Republican served a term-limited eight years in a majority blue state and spent much of that time in the national limelight as he built a reputation as a "tell-it-like-it-is" politician. But the Bridgegate scandal, a losing campaign for president and a day spent on a closed beach during a government shutdown left him with the lowest approval ratings for any governor in New Jersey history.

In Christie's first year, a YouTube video of a press conference went viral when a columnist asked if the governor's confrontational tone might hamper his ability to get bills passed.

"You must be the thinnest skinned guy in America," Christie told Tom Moran of the Star-Ledger newspaper. "Because if you think that's a confrontational tone, then you should see me when I'm really pissed!"

Also that year, Christie made the first of more than 40 trips to Iowa he would take during his two terms. These two things — his YouTube moments that went viral and his presidential ambitions — turned out to be the defining features of his eight years as governor. Christie doubled the budget of his communications staff, and deftly used video clips from town hall meetings to build his national profile.

"If what you want to do is put on a show and giggle every time I talk, well then I no interest in answering your question," he told a teacher during an early town hall that became his signature style.

Chris Christie leaves the Summit Diner on Nov. 3, 2009, for a stop in his gubernatorial campaign. That night, Christie would defeat incumbent Democrat John Corzine to become New Jersey's governor.

The videos made a star of Christie in the Republican Party. He was considered for the job of running mate to Mitt Romney, he chaired the Republican Governors Association and became a regular on cable news and late-night TV.

But his biggest moment came when Superstorm Sandy hit New Jersey in October 2012. The storm damaged 346,000 homes, left 2 million people without power and killed 37 in the state. On the first morning, a shaken Christie appeared before TV cameras, looking like he'd been up all night.

"I'll first say to all of you, especially those of you who are facing loss, devastation and the heart-breaking reality that your home may be gone, we are with you."

Wearing a blue fleece, he was omnipresent in the weeks that followed, touring the destruction, hugging homeowners and giving daily press briefings.

Romney lost the presidential election a week later — and with approval ratings soaring — Christie saw his own path to the presidency. He wanted a landslide re-election in 2013 that would prove he was a big-tent Republican who could win over Democrats.

"But in order to do that his campaign had to really use some very nasty tactics to twist arms to get Democrats to support him," said Patrick Murray, director of the Monmouth University Polling Institute. "And that's where Bridgegate came from."

Christie's political office in the Trenton statehouse and his campaign for re-election began courting Democrats in New Jersey. Those that endorsed got rewards, and some who didn't were punished.

Three top staffers would ultimately be convicted of causing a weeklong traffic jam to punish the Democratic mayor of Fort Lee, N.J.. Even though he was never charged with a crime, his image as a man who was above politics was destroyed.

Yet polls showed it was Christie's inattention to governing — he spent 261 days out of state in 2015 — that really bothered New Jerseyans.

New Jersey Gov. Chris Christie speaks at the Republican National Convention in Cleveland, Ohio, in July 2016. Christie campaigned among a throng of competitors before endorsing Donald J. Trump as the GOP's presidential candidate.

He campaigned for president nearly full time, but the one-time top runner for the nomination lagged behind a crowded field that was being quickly wiped out by Donald Trump. Christie dropped out of the race after a poor showing in the New Hampshire primary, and then his approval ratings took another hit when he endorsed Trump.

President Trump shakes hands with Christie during a meeting in the Cabinet Room at the White House last year. Christie publicly supported Trump after withdrawing from the 2016 presidential race.

An appearance with Trump, standing at his side, looking unhappy, took Twitter and late-night TV by storm. 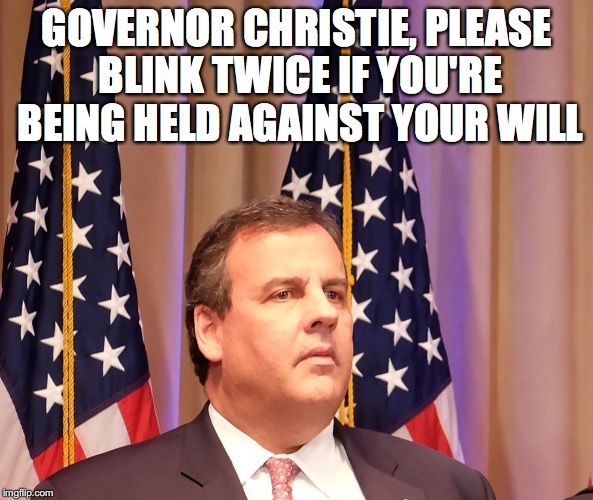 In New Jersey, Christie's constituents started to feel that he was treating them, and his job as governor, with contempt.

The low point hit this past fourth of July weekend. During a low-stakes standoff that nevertheless led to the shutdown of state government, Christie was photographed spending a day at the beach with his family. A completely empty state beach that was closed to everyone else because of the shutdown.

Christie ordered beaches closed down due to a gov shutdown. Today, he and his family enjoyed a state beach alone https://t.co/8zBkkShcBn pic.twitter.com/xpLQynT18r

His approval rating sank to the mid-teens and never recovered. In his final speech as governor last week, he made his case for his legacy:

"This — all of this — is due to our efforts, not bowing to political correctness to not worrying about being loved today," Christie said.