Accessibility links
Picture Book Author Says 'I Had To Be Real' When Writing 'Love' Matt de la Peña's new children's book covers the good and the bad of everyday life. He says, "I had to be honest that there are going to be these things in life that are tough and that are dark." 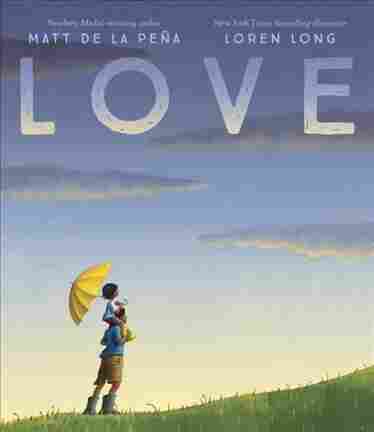 Sometimes children's books tell you everything you need to know. Matt de la Peña starts his new book, Love, with these words:

In the beginning there is light
and two wide-eyed figures standing
near the foot of your bed,
and the sound of their voices is love.

Love is filled with drawings by Loren Long of the good and the bad of everyday life. It reminds readers that, if you're lucky, you know what love is before you can even say the word; it's around you all the time if you just pay attention.

De la Peña explains where he got the idea for the book.

"Back last year there was so much divisiveness in the country," he says. "And I have a 3-and-a-half-year-old, and I would go into my daughter's room and read to her at night. And I was like, 'How do I, as a parent, as a relatively new parent — how do I transition from the news, which I'm very affected by, to sitting with my daughter and explaining the world to her?' And so I thought, 'Gosh, all I want is I just want to read her a book about love.' "

On the decision to include darker themes in Love

De la Peña: I wrote a number of drafts. And it was meant to be just a purely uplifting poem that I could read to my daughter. But there was something hollow about it. There was something that didn't ring true. And what I realized is I had failed to acknowledge any sense of adversity.

So I had to go back in and I had to be real. I had to be honest that there are going to be these things in life that are tough and that are dark. And that changed the poem dramatically.

Long: When I get this manuscript, it's just these words: "But it's not only stars that flame out, you discover. It's summers, too. And friendships. And people." And I'm reading this, and I'm thinking, "I can go in so many different directions." One of my ideas was maybe I'll do like a Norman Rockwell-type scene of children at the end of summer and they're moving away, there's a moving van. Another one would have been, like, maybe the death of a pet or perhaps the death of a loved one, maybe a grandmother. But then I also thought, you know, "I have divorce in my family; I have addiction in my family." 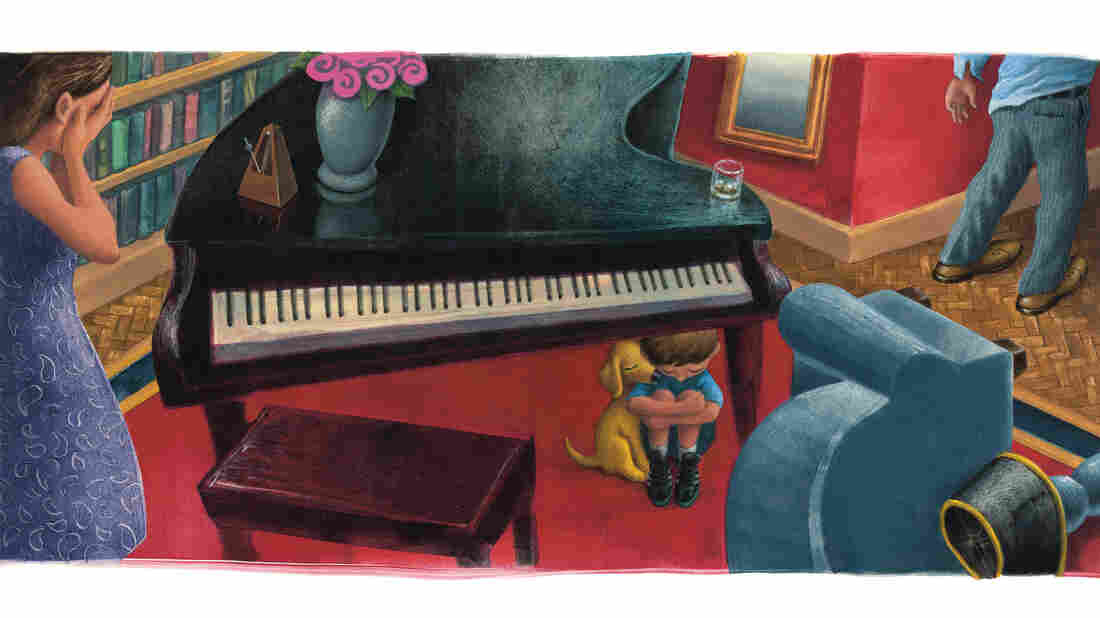 Artist Loren Long says, "What I'm illustrating here is a domestic dispute. ... If you are that child under the piano, you exist in this book." Loren Long/ Courtesy of Penguin Young Readers hide caption Artist Loren Long says, "What I'm illustrating here is a domestic dispute. ... If you are that child under the piano, you exist in this book."

And what I'm illustrating here is a domestic dispute. And if you're reading this book with a child from a wonderfully stable home, great. But that's a way of sharing empathy with that experience. And if you are that child under the piano, you exist in this book.

And what I'd love to point out really quick about this image: There's still a lot of love in this spread. That mother loves that child. That father even loves that child. And he's of course comforted by his dog.

On Long's close-up illustration of a child's face with the words "And the face staring back in the bathroom mirror — this, too, is love."

De la Peña: It blew me away. This is one we talked about a lot when he was doing the sketches and stuff. And I was so excited for this, and we both agreed that this was one of the biggest moments in terms of the idea of the poem as a whole.

I go into a lot of schools as an author, and sometimes I'll go into a very wealthy school and they've had an author before and they know how to do it; they're excited to bring me in. But I'll also go into some underprivileged schools. And occasionally when I'll walk into their school, a little boy or a girl will look up at me and say, "Hey mister, why would you come here?" In other words, they're saying, "Why are you wasting your time on us?" And it breaks my heart. 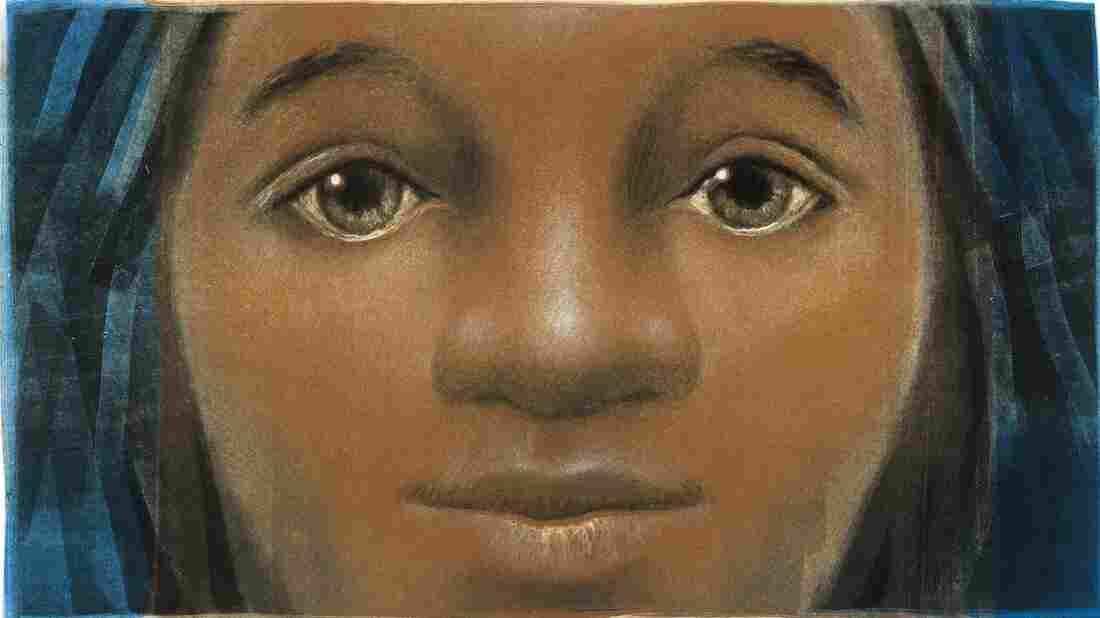 De la Peña says the child in this illustration "is basically saying, 'I dare you to ignore my existence.'" Loren Long/ Courtesy of Penguin Young Readers hide caption 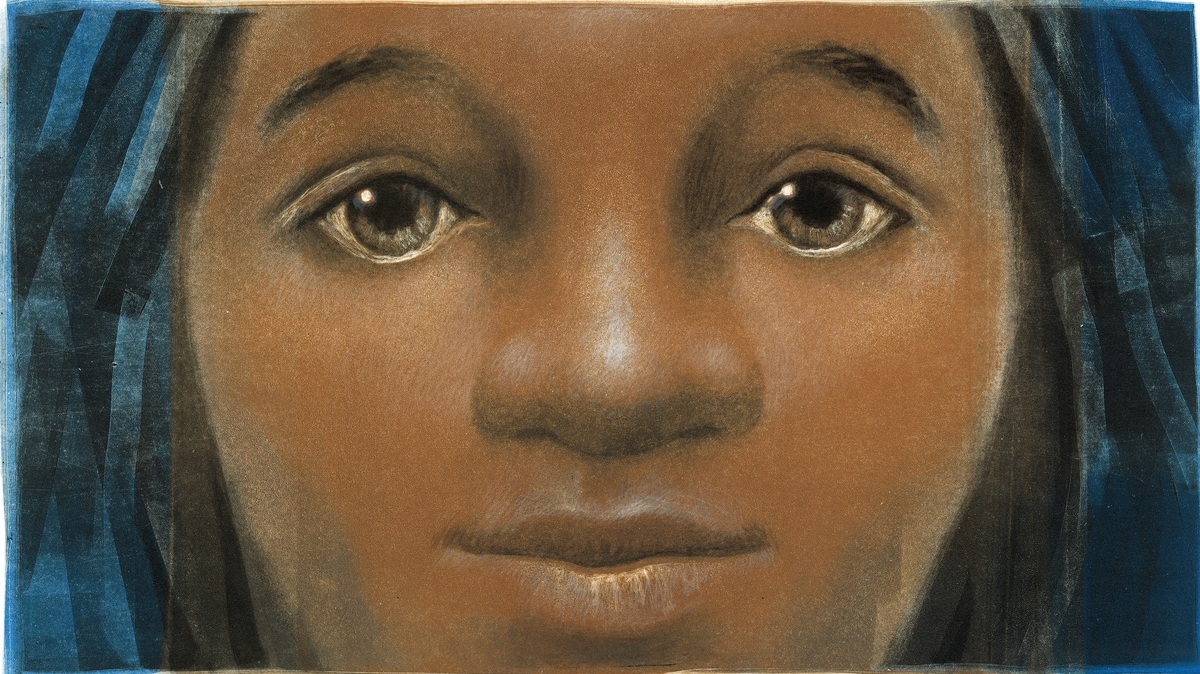 De la Peña says the child in this illustration "is basically saying, 'I dare you to ignore my existence.'"

So I think this moment in the poem — I wanted to just really, like, land on this truth that in order to go out into the world you have to first be able to turn to the mirror and find love in yourself no matter what race you are, no matter what socioeconomic level you're existing in.

So for me, this was a very important moment. But in another way ... this child is also looking directly at the reader and daring you to look away. And he or she is basically saying, "I dare you to ignore my existence."

Long: And for me, as the artist of this book, the reason I felt the big face would be impactful is that it's the only moment like that in this entire spread. You're seeing a lot of scenes and a lot of involved compositions, and when you turn this page I wanted you to stop. So I like to think in terms of cinema, and if I was making a movie, what moments do I want the audience to slow down and think?

Justine Kenin and Melissa Gray produced and edited this interview for broadcast. Sydnee Monday and Nicole Cohen adapted it for the Web.