Accessibility links
Sweet Honey In The Rock's Four Decades Of Music And Freedom The a cappella ensemble's music and performances are rooted in the belief that singing can help us understand how to transcend injustice.

We Who Believe In Freedom Shall Not Rest

We Who Believe In Freedom Shall Not Rest

Sweet Honey In The Rock's Four Decades Of Music And Freedom 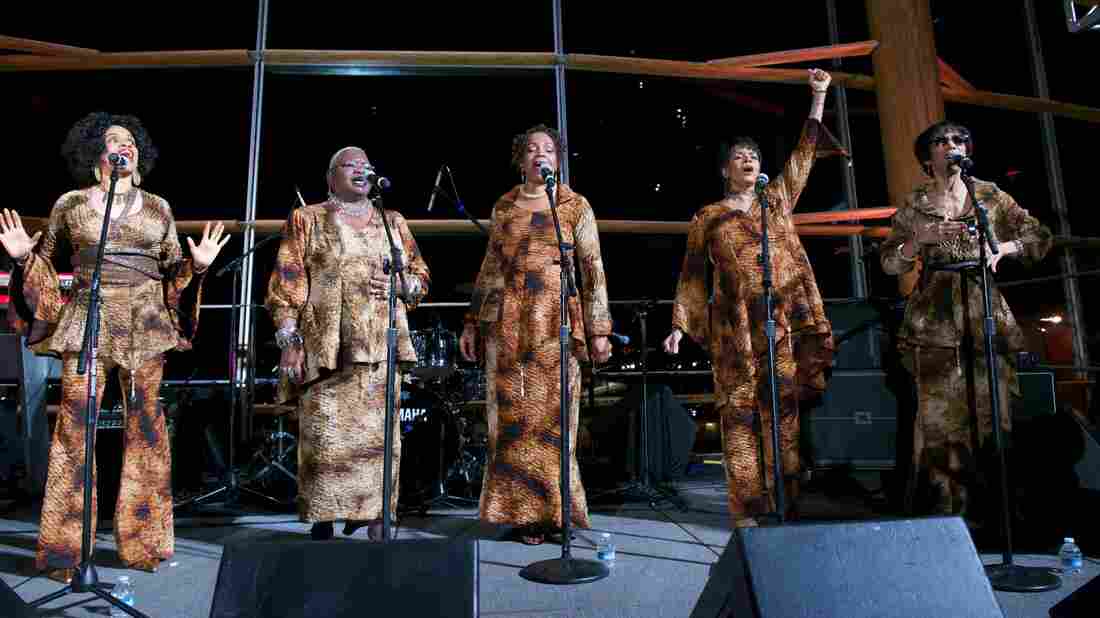 The music of Sweet Honey In The Rock — shown here performing in 2013 — demonstrates how the pursuit of freedom requires both bodies and voices. Earl Gibson III/Getty Images hide caption 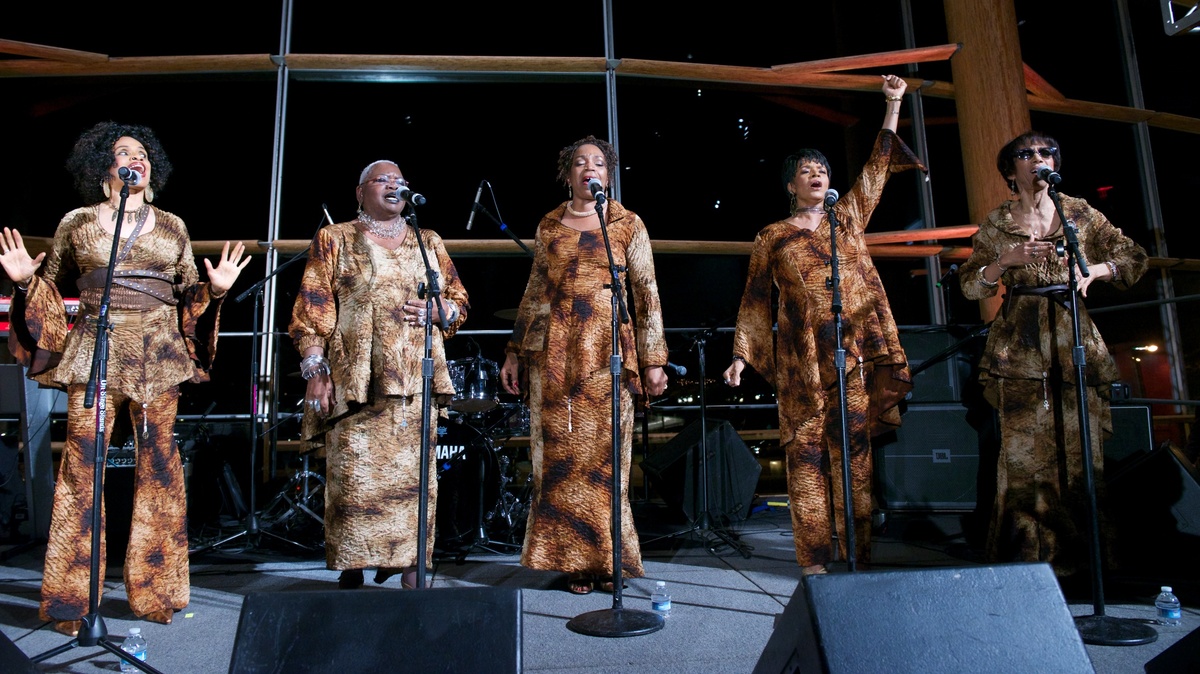 The music of Sweet Honey In The Rock — shown here performing in 2013 — demonstrates how the pursuit of freedom requires both bodies and voices.

Five years ago, in a crowded room at the Highlander Research and Education Center in Tennessee — a now-85-year-old education and organizing center for activists, occasionally called the epicenter of the civil rights movement — Dr. Bernice Johnson Reagon talked about how she and the SNCC Freedom Singers used music to help change the world. I looked around the room and saw activists and organizers of all ages on chairs and couches, many standing, some on laps, all eager to hear whatever she had to say. She told us how she learned quickly that gospel hymns were going to be a strong foundation for the civil rights movement's many freedom songs, because most of the black activists already knew them and it was quick and easy to replace the word "Jesus" with "freedom."

To demonstrate her point, she sang out in her warm, enveloping alto: "Woke up this morning with my mind stayed on ... freedom!"

Even for students of movement music, it was a remarkable moment. You can have an intellectual understanding of a cappella singing as the most portable means of music-making, but seeing Dr. Reagon burst into a line, you feel the unmistakable power of unaccompanied singing.

Of course, this is no surprise. Reagon helped cement the role of a cappella singing in freedom movements as part of the Student Nonviolent Coordinating Committee, which got her expelled from college. She built upon that concept further when she founded Sweet Honey in the Rock in 1973. Though Reagon left the group in 2004, Sweet Honey has continued down the same path it's been traversing for more than four decades, through its 27 recordings — including 2016's #LoveInEvolution — and the 23 women who have, at some point, sung as part of the group.

Live, they often sit in chairs, in a line across the front of the stage. Women sitting in chairs is an intimate thing, and it can feel as though the concert hall or theater is really someone's living room; as though these women have been hard at work all day and now is the time to sit down, rest and sing. Built only on harmony and vocal percussion, the music they make is equal parts declaration and release. After all, it's not long before their bodies start to move — arms swinging, feet bouncing. Particularly during the freedom songs, you get the impression they're pulling from every part of their selves to add not only their voices but their entire being to the pursuit of that freedom. For Sweet Honey, as for the SNCC Freedom Singers before them and countless participants in America's social movements since, the pursuit of freedom requires both bodies and voices. And while that may be a difficult thing to explain in so many words, the music teaches us on a visceral level.

Sweet Honey In The Rock Returns With 'Grace'

The history of the group, which is currently a quintet, mirrors the effort of the civil rights movement from which it sprung: to raise voices, to empower individuals and to accomplish together what we cannot accomplish alone. They do this by filling out their music with only their voices. A single baritone line alone, for example, wouldn't be much of a song; but a baritone singer filling in one of five parts, in harmony, takes the listener somewhere. The sound moves into your heart and pushes it open wider.

Debate can solidify and sharpen opposing viewpoints; a great speaker can encourage throngs of people with sweeping oratory. But group singing has the ability to instantly unite everyone in a room, with no introduction or explanation needed. Highlander's original music director, Zilphia Horton, who was a pioneer of using music this way in the 1930s through the 1950s, used to tell her students that people only need to have one thing in common before they can sing together, and that is that they believe in something.

As generations of movement participants have experienced, music can be a meaningful tool in a protest — civil rights groups famously filled the jails and sang freedom songs to the guards. But as Reagon and Sweet Honey well know, the transformative effects of singing go much deeper than merely being a form of protest. Singing can help us understand how to transcend injustice. When we sing in a group, we have to listen to one another, adjusting our individual voices to match one another in tone, volume and pitch. We must cooperate rather than trying to drown one another out. And while the sound of a group of people singing at a protest can draw others' attention to what's wrong, it can also invite people to experience what it might feel like to cooperate, even if through disagreement.

Thirty Years, and the Honey Is Still 'Sweet'

All of this becomes more tangible when Sweet Honey sings. Some of its members close their eyes to listen more closely to one another. They exchange glances and smile, gesture with their hands to pick up the rhythm or bring another part of the harmony in.

Harmony, synonymous with agreement, is the key. In music, harmony is when two or more voices, singing different notes, join together. In harmony, we don't have to sing the same line — or think the same way, or believe the same thing — in order to get along. Add counterpoint — the musical practice of synchronizing melodies so that a natural rhythm emerges — and you get a physical and aural practice in the way very different individuals can work together. The lessons of harmony and counterpoint can be learned by watching; they're far more powerful the more people participate. (Just as, incidentally, citizenship is more powerful when more people participate.)

For any movement to succeed, especially any nonviolent movement, it's important for those who are sympathetic to understand they don't have to agree on everything. They need only acknowledge their common humanity, their common goals, and then work toward them together. Sweet Honey's music reminds us that singing together is an opportunity to practice that in real time, through harmony. They harness the legacies of countless singers and song leaders, from their African ancestors to Highlander's own Zilphia Horton, folk singers like Joan Baez, and beyond, to create a vehicle of harmony and rhythm that drives the meaning of the songs straight into their audience's heart.

This use of harmony is not an esoteric idea, either; it is the foundation of music. It is, quite literally, what music does, and if we can focus in on these musical elements, we can learn the value of all voices in obtaining a more peaceful and equitable world. Music has the potential to be civility incarnate.

And Sweet Honey in the Rock has been approaching music this way for decades, as they've introduced African folk hymns alongside American gospel songs. The group pulls equally from the deep well of traditional music and its own compositions. Its fifth member performs the songs in sign language, to bring the music to the widest possible audience. For Sweet Honey's mission of using music to obtain a better world is nothing if anyone is excluded. That the members are all female is itself a statement, as the cherishing of connection and relationship, of finding agreement even in disagreement, is fundamentally feminist. Further, the role of black women in struggles for freedom in America is frequently overlooked, but it becomes unignorable at a Sweet Honey performance.

One of the group's most powerful numbers is "Ella's Song," from its 1988 album Breaths. Reagon wrote it to honor the life and work of civil rights hero Ella Baker. Pairing Baker's own words together in couplets, Reagon arranged the vocals so that they begin with one voice, which is supported and propelled further by the low, rhythmic voices of others, until they all join together in harmony at the end:

Listen to that song. Try singing along with that line, "We who believe in freedom shall not rest until it comes." Notice how it feels in your mouth, how it feels to hear yourself sing those words. Consider everything you know about freedom movements, and then observe your thoughts as you sing along with these five women, as your voice blends with theirs. Regardless of whether or not you sympathize with the sentiment, singing along offers a different experience than if you were to simply read something Ella Baker said, and react. Maybe you think you're not a very good singer, but when you hear your voice together with theirs, on that line, does it seem important that you can't carry a tune? Or does it suddenly somehow make sense when you take in — literally take into your body and mind as you sing — how and why we who believe in freedom shall not rest until it comes?