Accessibility links
See A Famous Monster Come Alive In 'Frankenstein: The 1818 Text' Most stage and screen versions of Frankenstein are based on a later edition of Mary Shelley's classic — this new reprint of her original text shows the story growing and changing with its author. 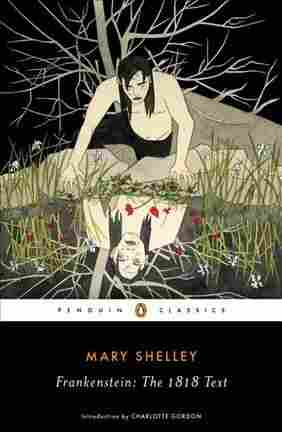 And now, once again, I bid my hideous progeny go forth and prosper.

Frankenstein is embedded in the public imagination. It carries challenging and often uncomfortable motifs — doubling, parenthood, feminism, loneliness, the righteous anger of the outcast, the equally transformative powers of love and hate, the natural world, the limitations of revenge, and the horror of science without conscience. And though the novel was written at the cusp of the Victorian age, it's rarely spoken of as a literary artifact from 200 years ago; "Frankenstein" is as efficient and resonant a reference today as it was in 1818. It's a story that, fittingly, feels alive.

Frankenstein: The 1818 Text, with additional material and an introduction from Charlotte Gordon, proves that the novel was a living thing, and a troublesome one, even to its own maker (who struggled with everything from brutal public reception to editorial pressure from her husband Percy). Mary Shelley published two distinct editions of the book. The 1831 edition contains many of the hallmarks of the story as the stage and cinema later understood it — in particular, that edition emphasizes the hubris of interfering with God's natural order, and suggests that Victor Frankenstein is helpless against the divine forces before him.

The 1818 Text has few drastic differences from the more well-known version, but even small changes are thrown into striking relief. The novel is structured to make you consider the process of storytelling itself, and nested narrations create space to think critically. (Victor even apologizes once to his listener: "I forget that I am moralizing in the most interesting part of my tale; and your looks remind me to proceed.") But in the 1818 text, that structure is a means to return again and again to the idea of choice. Frankenstein is not yet a tragic figure borne along on the winds of fate; he's a man whose ambition exceeds his conscience, and who turns down several chances to take responsibility or make amends. Here, Frankenstein isn't a tragic hero, but a flawed protagonist; the novel is sympathetic to his terror, perhaps, but not to his decisions.

In this bicentennial year, much will be written about Frankenstein, its adaptations, and whether there exists a definitive or superior version of the novel. I'm not sure there is, but the two main editions are certainly different creatures. The 1818 Text is reflective of the thrill and nervous energy that ushered in a new era of science and society, and is less concerned with divine plans for the natural order than it is in man's responsibility toward it. (The famous epigraph — accidentally missing from this first printing, which feels apt somehow — makes this clear; "Did I request thee, Maker, from my clay/To mould me Man, did I solicit thee/From darkness to promote me?")

'Frankenstein: The 1818 Text' ... proves that the novel was a living thing, and a troublesome one, even to its own maker.

But this edition will probably be best read in tandem with the 1831 version. For that edition, with the author revealed and the story still shocking, there was likely some pressure on Shelley to create a slightly more pious impression. But she had lost children, siblings, and her husband in the interim, and in some ways the later edition reflects a life defined by grief (she notes that the book echoes "many a walk, many a drive, and many a conversation, when I was not alone; and my companion was one who, in this world, I shall never see more.") The fatalist turn of the 1831 text might be an attempt by Shelley to make sense of loss and loneliness as much as an attempt to gentle a legacy.

Reading The 1818 Text — especially if you're more familiar with the later edition — might feel slightly disconcerting. Certainly it's an example of the difference small changes can make in the tone of a text. But part of what makes it a little unsettling is what makes it so interesting: The chance to watch a 200-year-old novel develop. In a story that's reflected so much of the last two hundred years, and centers so much on choices, storytelling, and the potential for change, it only makes sense that Frankenstein reflects changes within its own creator. Read as much celebration of Frankenstein as you like this year; start here.