Accessibility links
'Girls In The Picture' Traces A Friendship In The Flickers A century ago, Hollywood had no stars. Movies were silent and the actors were anonymous. Melanie Benjamin's new novel outlines how actress Mary Pickford and writer Frances Marion changed that. 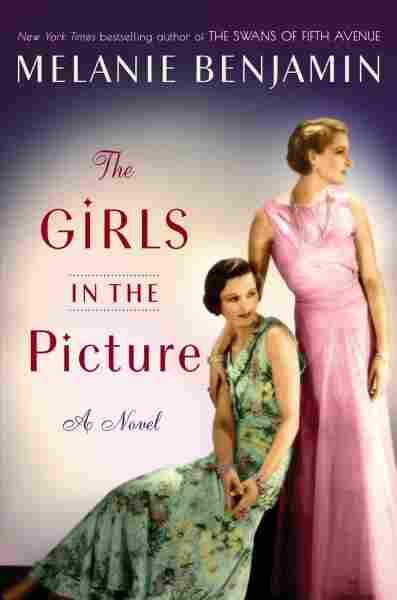 The Girls in the Picture

Title
The Girls in the Picture
Author
Melanie Benjamin

And ... action! A century ago, in the days when Hollywood was still Hollywoodland, audiences sat in darkened theaters to watch silent "flickers" featuring anonymous actresses and actors who were called "movies," their roles written by "scenarists." The whole idea of a movie star had yet to be invented, until a Canadian-born gamine named Mary Pickford charmed her way into the public's consciousness. Crucial in transforming mere human flesh into cinematic icon was writer Frances Marion, who chanced onto a film set, met Pickford, and devoted herself to "America's sweetheart" for decades, eventually becoming one of the highest-paid screenwriters in Hollywood.

Melanie Benjamin, who has built an entire oeuvre out of dramatizing the lives of real historical heroines, delivers what in Variety lingo would be termed a boffo production with The Girls in the Picture, the saga of Pickford and Marion from the first flush of their friendship to its ignominious end.

The novel opens in a long ago, far away fantasy land, where people still pronounce the hard "g" in Los Angeles, and where many an orange grove has already begun disappearing "beneath the pavement of a new movie studio." All the world's a stage, and the whole of Hollywood is a set; Frances tells us, "In the quiet little parks and squares I liked to haunt during my lunch hour, I was no longer surprised to see a man in a long wig, dressed in white robes like Jesus, sharing a box lunch with two dancehall girls from the Klondike, while on a nearby bench a caveman and Marie Antoinette held hands."

Melanie Benjamin ... delivers what in Variety lingo would be termed a boffo production with 'The Girls in the Picture.'

One of the pleasures of The Girls in the Picture its no-males-necessary alliance of two determined females — #TimesUp before its time. At a private screening of 1917's The Poor Little Rich Girl, written by Marion and starring a 25-year-old Pickford as pre-teen Gwendolyn, the grand poobahs of the fledging film industry loftily inform the girls that the production simply won't fly. And indeed it doesn't fly — instead, it skyrockets, becoming one of the highest grossing films of the year.

In the novel, Frances states again and again that she wants to give Mary the childhood she never had. And Pickford, emerging from a hardscrabble stage career of "firetrap theaters," "threadbare costumes" and having to stuff newspaper in her clothing to stay warm, wakes up to the miracle of California sunshine, plays leapfrog with child actors on the set, and basks in the warmth of an appreciative audience.

Early moviemaking was often a primitive affair. Tinseltown demanded "awful film makeup, layers and layers of ghastly yellowish pancake troweled on." Most important, though, in Benjamin's telling, is the euphoria that comes with the freedom to create. "That's the exciting part, isn't it?" says Marion to Pickford. "We're making this up as we go along and there's no one to tell us we're doing it wrong!"

In 'The Pictures,' The Story Slips Out Of Focus

Eventually, Frances broadens her scope and stops churning out the little-girl scenarios on which Mary's career depends. In search of creative freedom, Pickford, along with her husband Douglas Fairbanks, Charlie Chaplin and D.W. Griffith, founds one of the first megastudios, United Artists — and becomes so famous that when the two women and their new husbands attempt a joint honeymoon in Europe, they must literally flee from the shrieking crowds.

Perhaps the most compelling section of the book comes with the horrors of the Great War, when Frances joins the troops as an Army lieutenant to direct a newsreel about women behind the battle lines. She finds herself awestruck by the nurses, yes, but also the intrepid women who run the canteens, ride bicycles bearing telegrams to the front lines, cover bodies with sheets in the field hospitals and arrange for funerals. At one point, we see Frances separated from the film crew, making her way knee-deep in mud and pouring rain, seeing "wood crosses hastily nailed and plunged into the earth like hat pins on a filthy hat."

Inspiration is a rare and unexpected gift in a book filled with the fluff of Hollywood, but Benjamin provides it with The Girls in the Picture. As Frances assures her best friend, "We can't know the future. But we can know our own hearts."