Accessibility links
Do You Have The Right To Plead Not Guilty When Your Lawyer Disagrees? The Supreme Court heard arguments in a case in which the defendant's lawyer told the jury he was guilty over the defendant's explicit objection. 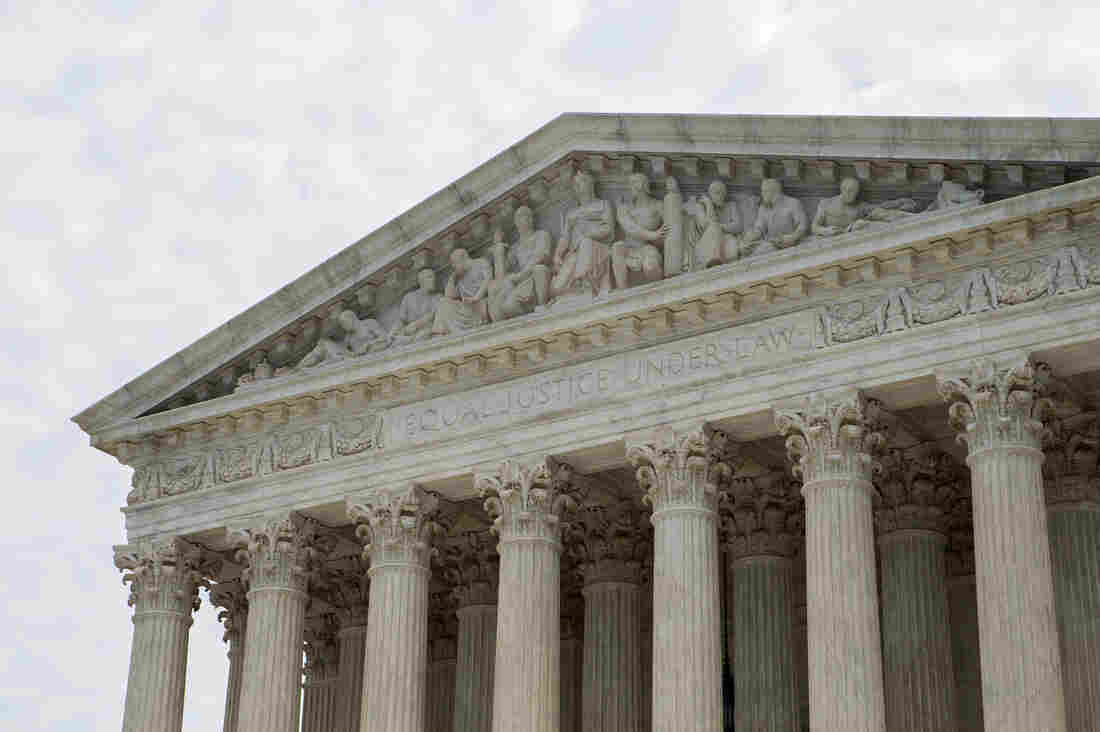 The U.S. Supreme Court hears arguments in a case where a defense lawyer refused to follow the instructions of his client, who contended he was innocent. Liam James Doyle/NPR hide caption 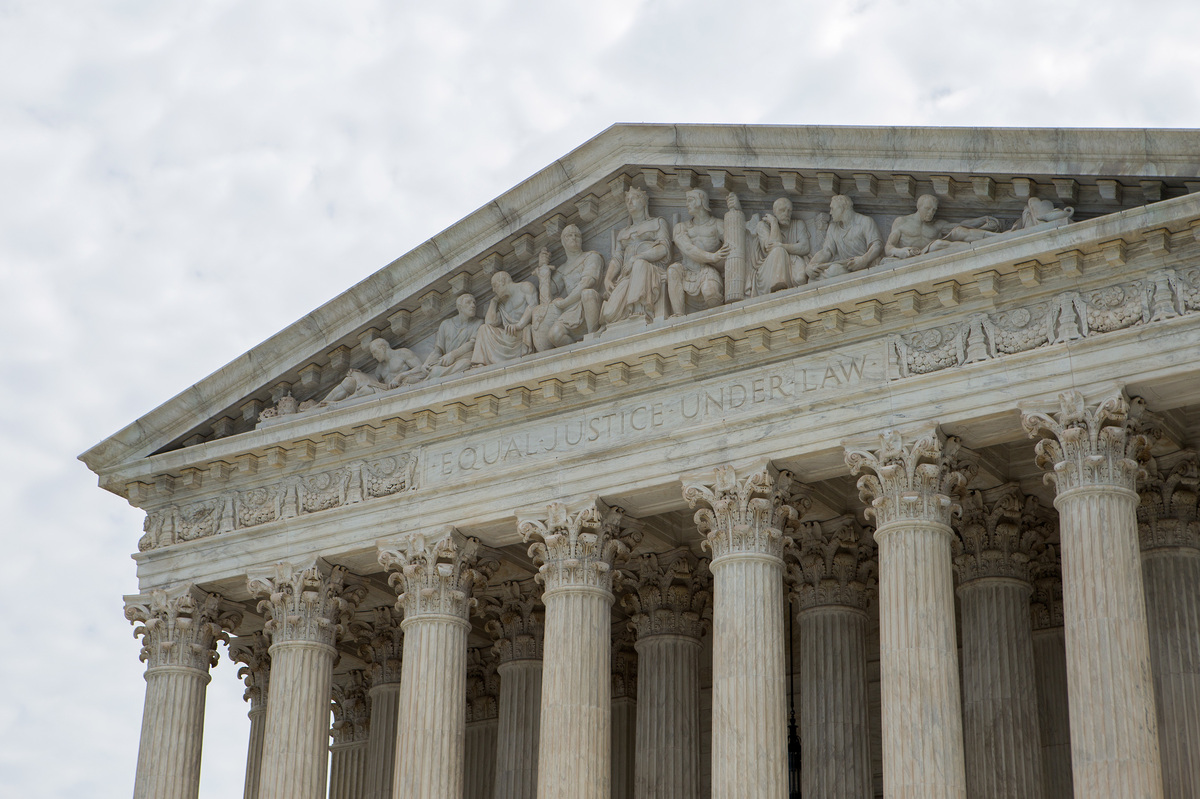 The U.S. Supreme Court hears arguments in a case where a defense lawyer refused to follow the instructions of his client, who contended he was innocent.

The case before the U.S. Supreme Court Wednesday had a surprise plot twist. Jurors were told that the accused was guilty of a triple murder — but the lawyer making that statement was not the prosecutor; he was the defense attorney.

The question before the justices was whether that violated the client's constitutional right to counsel. Justices liberal and conservative signaled that they have a problem with a lawyer who disregards his client's express wishes by conceding the defendant's guilt.

The defendant, Robert McCoy, was charged with killing three family members in a vain attempt to find his estranged wife, Yolanda. With the help of police, she had fled her Louisiana home after McCoy, at knifepoint, threatened to kill her. She brought her infant daughter along but left her 17-year-old son with her parents so that he could finish high school and graduate.

A month later, McCoy was arrested and charged with killing his wife's parents and her son. A 911 tape recorded Yolanda's mother screaming: "She ain't here Robert. ... I don't know where she is. ... The detectives have her." After the sound of a gunshot, the line goes dead.

Despite overwhelming evidence against him, McCoy steadfastly maintained his innocence, alleging that the killings were the product of a drug deal gone bad and that police conspired to frame him because he supposedly revealed their involvement in drug trafficking. Five months later, state psychiatric experts found McCoy mentally competent to stand trial.

His first lawyers were public defenders, but he fired them for refusing to subpoena his alleged alibi witnesses. His parents then hired Larry English for $5,000. He advised McCoy to plead guilty in exchange for life in prison instead of the death penalty, but McCoy repeatedly refused, insisting that he was innocent. He also refused to plead not guilty by reason of insanity.

Finally, English embarked on a strategy of conceding his client's guilt, in hopes of avoiding the death penalty. Indeed, in his opening argument, he told the jury, "There is no way reasonably possible that you can listen to the evidence and not come" to that conclusion. And in his closing, he told the jurors that he had taken the burden of finding and proving guilt off of them and the prosecutor.

The defense lawyer was hoping that the jury would not sentence McCoy to death if he could convince them that McCoy suffered from diminished mental capacity and should therefore only be convicted of second-degree murder. But as the prosecutor would soon explain to the jury, that defense was legally unavailable to McCoy because Louisiana allows a diminished capacity argument only if the defendant has pleaded not guilty by reason of insanity.

In any event, the strategy didn't work. The jury ultimately sentenced McCoy to death. The Louisiana Supreme Court upheld the decision and an infuriated McCoy, aided by a new lawyer, appealed to the U.S. Supreme Court, contending that the state had deprived him of his right to counsel.

On Wednesday McCoy's new lawyer, Seth Waxman, told the justices the Sixth Amendment right to counsel belongs to the accused. He said it is a "personal defense" and the decision on whether to admit or contest guilt is the heart of that personal defense.

Justice Stephen Breyer, however, worried about creating chaos in the lower courts, with increasing numbers of defendants deciding to defend themselves, without any skills or knowledge.

Next up to the lectern was Louisiana Solicitor General Elizabeth Murrill. She urged the court to uphold the death penalty in this case and to create a narrow rule that would allow lawyers in death penalty cases to override their clients' instructions on questions of trial strategy if those directives would be a "futile charade" that would lead to the death penalty.

Justice Anthony Kennedy reacted with apparent incredulity. "The state of Louisiana says that if a defendant wants to plead not guilty, the defense attorney can plead guilty if he thinks it's the best way to avoid the death penalty?"

Justice Elena Kagan chimed in, "We've given lawyers a lot of leeway" to make strategic decisions in representing defendants because lawyers often "know better how to pursue a set of objectives." But here we have a client saying, I have an overriding objective in this case and "that's to avoid ... admitting that I killed family members. And you're saying that the lawyer can say it doesn't matter that that's your overriding objective?"

Murrill responded that the lawyer here "believed his client was delusional." His ultimate objective was to save the client's life.

But that wasn't the client's objective, interjected Justice Kagan. The lawyer here was in a "terrible position because he want[ed] to defeat the death penalty." But his client said, "that's not my goal."

What if he thinks life in prison is worse than the death penalty? asked Chief Justice John Roberts.

Murrill replied, you're talking about a defendant who is" rational," and that's "not correct in this case."

Justice Sotomayor pushed back: So it's only when your client is not rational that you have the "freedom to ignore" him?

Murrill countered, as she had repeatedly, that the question should be whether the lawyer provided ineffective assistance to his client.

Justice Kagan, and later Justice Neil Gorsuch, replied that notion isn't a good fit in cases like this because there was nothing wrong with what the lawyer did if the goal was to avoid the death penalty. The problem was that he was substituting his goal for his client's.

Justice Samuel Alito observed that "this situation has occurred" because of a number of prior steps, starting with the decision that McCoy was mentally competent to stand trial. If someone like McCoy really believes that he is being prosecuted as part of an elaborate conspiracy, asked Alito, "is he capable of assisting in his own defense?"

McCoy's case is not rare, in this sense. Only rarely are defendants in capital cases found incompetent to stand trial, according to Lawrence Fox, a Yale Law School ethics lecturer who, with nine other nationally known legal ethics experts, has file a brief on McCoy's side.

"This is a very difficult issue," Fox said. "Obviously most of us would think that the lawyer should just do what's in the best interest of the client in the view of the lawyer." But the Constitution and the legal profession have drawn the line differently: "The client gets to decide because the client is the person who is going to suffer whatever the result is, and we can imagine many situations where the lawyer could be overbearing" — so overbearing that his will trumps his client's ability to be master of his own fate.

At the same time, Fox readily acknowledged, the result may be that some defendants are executed who might have been able to avoid the death penalty by pleading guilty or not guilty by reason of insanity.