Accessibility links
Majority Of Americans See Trump's First Year As A Failure A new NPR/PBS NewsHour/Marist survey finds Americans believe Trump has divided the nation in his first year as president. But people who backed him in 2016 continue to stand firmly behind him. 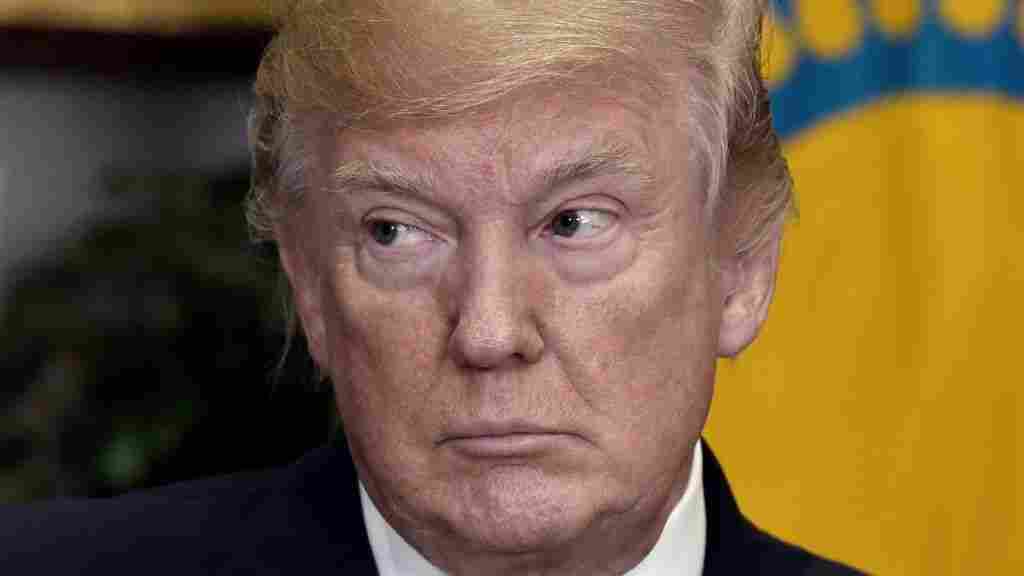 Americans give President Trump relatively positive marks on his handling of ISIS and the state of the economy. Olivier Douliery/Pool/Getty Images hide caption 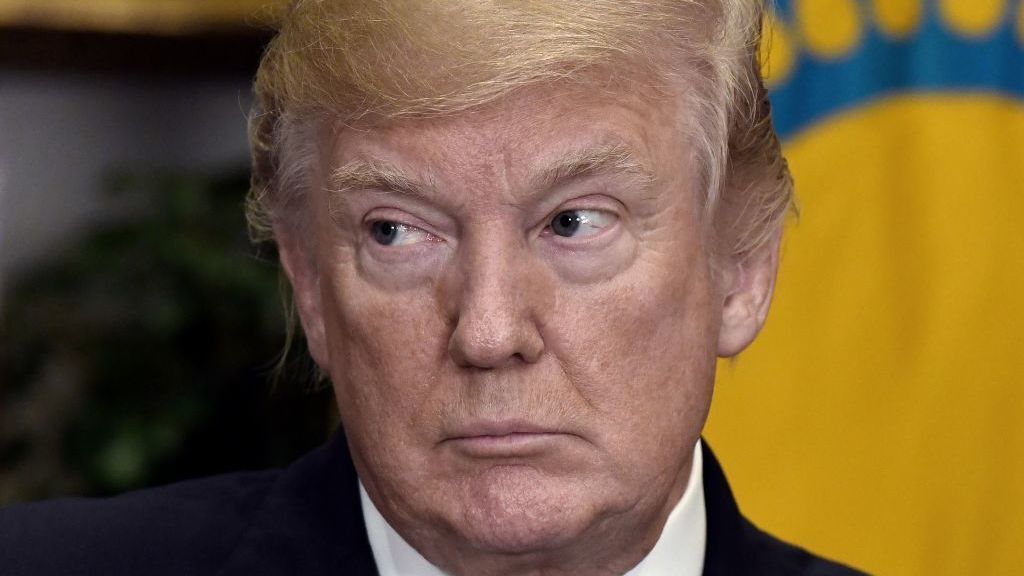 Americans give President Trump relatively positive marks on his handling of ISIS and the state of the economy.

As President Trump approaches the one-year anniversary of his inauguration, a majority of Americans think that his first year in office has been a failure and that he has divided the nation.

NPR/PBS NewsHour/Marist poll data released Thursday finds that Americans deemed Trump's first year a failure, 53 percent to 40 percent. And by an almost 2-to-1 ratio (61 percent to 32 percent), Americans said they believe Trump has divided the country since his election.

Americans give Trump relatively positive marks on his handling of ISIS and the state of the economy — no small things. But they disapprove of his handling of just about every other issue or think things have gotten worse — from their views of the tax plan to the state of race relations and women's rights to immigration, health care, the deficit and foreign policy, including his approach to North Korea. Seven in 10 Americans are now concerned about the possibility of war breaking out with the rogue nuclear nation.

"The first-year grades for Trump are not good," said Lee Miringoff, director of the Marist Institute for Public Opinion. "He remains with his base intact and not much else. People remain doubtful in the institutions of our government, doubtful in how he's communicating things and how he's handling things. It's not a pretty picture for the president after the first year."

A majority of Americans continue to disapprove of the job Trump is doing overall (53 percent), think the country is headed in the wrong direction (57 percent), overwhelmingly believe his policies are directed toward helping the wealthy (60 percent) as opposed to the middle class (25 percent), and see his use of Twitter as a risky way to communicate (78 percent) that isn't sending the right message.

Trump still enjoys loyal support from his core and unwavering base — but not many others. He has slipped with independents, for example, a group he won in 2016. None of that bodes well for Republicans in this year's midterms.

A third of Americans said Trump's first year was a "major failure." Just 15 percent described it as a "major success."

Notably, half of independents called Trump's first year in office a failure, including a 30 percent plurality who said it was a "major failure."

Unsurprisingly, there is a sharp partisan divide — 87 percent of Democrats called Trump's first year a failure and 71 percent said he had fallen below their expectations as president.

Trump's approval ratings also remain low — with just 37 percent approving of the job he is doing as president overall while 39 percent strongly disapprove.

Those numbers are virtually unchanged from the past several months, as Trump's base remains in his corner — 85 percent of Republicans approve of the job he is doing, along with 90 percent of Trump supporters.

But again problems with independents show up for Trump — just 38 percent of them approve of his job performance.

It's worth pointing out that those splits come despite the economy's continuing to improve.

Nearly all Democrats (90 percent) and a majority of independents (59 percent) said they believe the president has divided the nation over the past year.

Trump's numbers with Republicans are a bit softer here, but still, they overwhelmingly (70 percent to 21 percent) said they think he has united the country.

The good: ISIS and the economy

Trump gets his best marks for his handling of ISIS and the state of the economy, but not by overwhelming margins. Almost half (48 percent) approve of how his administration has worked to defeat the terrorist organization, although 40 percent disapprove.

The strong economy is the where Americans see Trump as having the most impact. Twenty-one percent singled out that issue, followed closely by 20 percent who said taxes — just on the heels of the tax overhaul that Congress passed last month.

Forty-four percent of Americans said the economy has improved under Trump, while 35 percent say it has stayed about the same.

On trade, Americans are divided, with 44 percent disapproving of how he has handled the issue and 43 percent approving. Trump pulled the U.S. out of the Trans-Pacific Partnership trade deal after he was elected, and he wanted to renegotiate NAFTA or even end it. That is a winning issue with independents by a 6-point margin, and over three-fourths of Republicans like how he has handled trade.

The bad: everything else

On a host of issues, from race relations to women's rights to foreign policy, Americans think things have gotten worse under this president.

Some 56 percent said race relations have worsened under Trump during the past year. (This survey was conducted before Trump reportedly used vulgar language in a meeting to disparage African nations and wondered why the United States continues to admit people from impoverished countries like Haiti rather than places like — overwhelmingly white — Norway.)

When it comes to women's rights, 37 percent of Americans think things have worsened, 40 percent believe the issue has stayed about the same and 18 percent believe it has improved.

Trump also gets low marks for how he has handled immigration and health care, with 58 percent disapproving of his handling of both issues.

Republicans failed to repeal the Affordable Care Act, also known as Obamacare. And Congress is trying to find a way forward on how to deal with so-called DREAMers, immigrants who were brought to the United States illegally as children. Some 700,000 had received temporary protection under the Deferred Action for Childhood Arrivals, or the DACA program set up by President Barack Obama. Trump rescinded the executive order last year, and protections for DACA recipients expire March 5.

Trump has maintained he wants funding for a wall along the southern border with Mexico, which he touted repeatedly on the campaign trail, in exchange for a reprieve from deportation for DACA recipients.

The wall, getting rid of the health care mandate and paying for the tax bill all cost money — and on the deficit, 53 percent of Americans disapprove of how Trump has handled it. Just a third approve.

On his overall handling of foreign policy, over half (54 percent) of Americans say it has gotten worse over the past year, with a quarter saying it has gotten better.

Trump has gotten into a war of words with North Korean leader Kim Jong Un, threatening military action and even disparagingly tweeting about him, nicknaming Kim "Little Rocket Man."

None of that has helped Trump in the eyes of Americans. Overwhelming numbers say they are concerned about the possibility of war with North Korea.

Seventy-one percent said so, with 44 percent saying they are very concerned.

More than half (58 percent) disapprove of how Trump has handled the rising tensions with the nuclear power, and just over a third approve.

Half of Americans believe North Korea is a major threat to U.S. security — a number that has actually decreased since April, when 61 percent saw it as a major threat. Now, 39 percent classify the country as a minor threat while only 8 percent said it poses no threat at all.

Republicans are the least concerned of any political party subgroup, but a majority (57 percent) still say they are concerned in some way. About a quarter of GOP voters aren't very concerned, with 21 percent saying they aren't concerned at all.

That tax bill is opposed by 46 percent of Americans, with 36 percent saying they approved of the bill. Again, that is split largely along partisan lines, with three-quarters of Republicans favoring the bill, and independents liking it by a 4-point margin. Seventy-nine percent of Democrats opposed the bill.

The problem for Trump and congressional Republicans is that the public overwhelmingly sees the bill as largely helping business over working people nearly 3 to 1 (64 percent to 22 percent). Even Republicans are soft on it, with 47 percent saying it will help working people and 31 percent believing it largely helps businesses.

Still, Americans are nearly evenly split as to whether the bill will hurt their family financially (40 percent) or help them (39 percent.) Sixty-nine percent of Republicans think it will help their family, while 65 percent of Democrats think it will do more harm than good. By a 4-point margin, independent voters think the bill will mostly help them (40 percent) rather than hurt (36 percent).

Trump's inability to widen his coalition, especially by continuing to alienate independent voters, could be a major detriment in this year's looming midterm elections. Given where his approval ratings are and the fact that the first midterm of a president's term is typically a referendum on his job so far, there area plenty of signs of a possible wave that could flip control of the House — and, in a much longer shot, the Senate.

Congressional Republicans have even lower ratings than Trump, with only 28 percent of Americans approving of the job they're doing, while 61 percent disapprove.

However, the news isn't much better for Democrats, who find themselves in virtually the same position — 28 percent approval with 57 percent disapproval.

When asked who they would vote for in November, Democrats have a 6-point edge over Republicans, 46 percent to 40 percent. That is a shift since Marist last polled in December, finding a 13-point advantage for Democrats. Other recent polling has also given Democrats a double-digit edge — another harbinger of a possible wave that could swing control of the House.

Miringoff attributed the swing — which has also tightened in past polls — to a shift in independent voters moving to uncertain. In this survey, they preferred Republicans by a 2-point margin, 38 percent to 36 percent, with 11 percent undecided. The survey was done when a potential immigration compromise looked possible, as Trump led a bipartisan group of lawmakers in conversation at the White House.

"Democrats and Republicans are mostly locked into supporting their respective party's candidates for Congress. Independents are swayed by what is happening at the time of the survey," Miringoff said. "So, when President Trump is in Asia or his tweeting is less frequent or Congress gets its act together and gets things done, the government looks less dysfunctional. When this happens, the GOP brand is viewed less negatively and the gap between the parties on the congressional generic narrows. "

But when Trump becomes more unpredictable — especially on Twitter — those numbers could shift and harm the GOP. An overwhelming 78 percent majority think that the president's use of Twitter is a risky way to communicate, with just 15 percent saying it sends the right message. Even 57 percent of Republicans think his tweets are often risky, while 31 percent of GOP voters think it sends the right message.

The direction of the country has stayed consistent — on the surface — with Americans appearing to be pessimistic in similar numbers. But inside the numbers, they have shifted in a big way.

In September 2016, 58 percent of Democrats thought the country was moving in the right direction, while 85 percent of Republicans thought it was going in the wrong direction.

Fast-forward to today, and it's the opposite — three-quarters (73 percent) of Republicans think the country is going in the right direction and 84 percent of Democrats think it's the opposite.