Accessibility links
Baltimore Schools' Heating Crisis A 'Day Of Reckoning' For The City And State After heating problems left some students in 40-degree classrooms, city and school leaders, there's plenty of baggage and blame to go around. 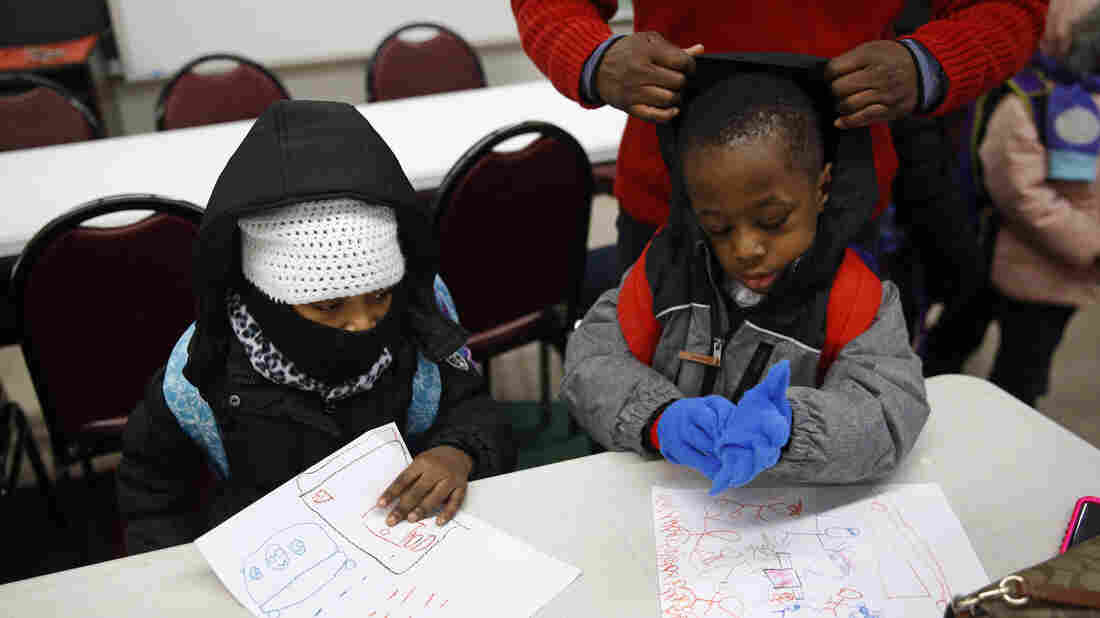 Teacher Loraine Wilson, top right, helps bundle up pre-kindergarten students as they wait to be picked up at the end of a school day at Lakewood Elementary School in Baltimore on Jan. 9. The day before, Lakewood students were sent back home just after arriving when pipes burst in the school. Patrick Semansky/AP hide caption 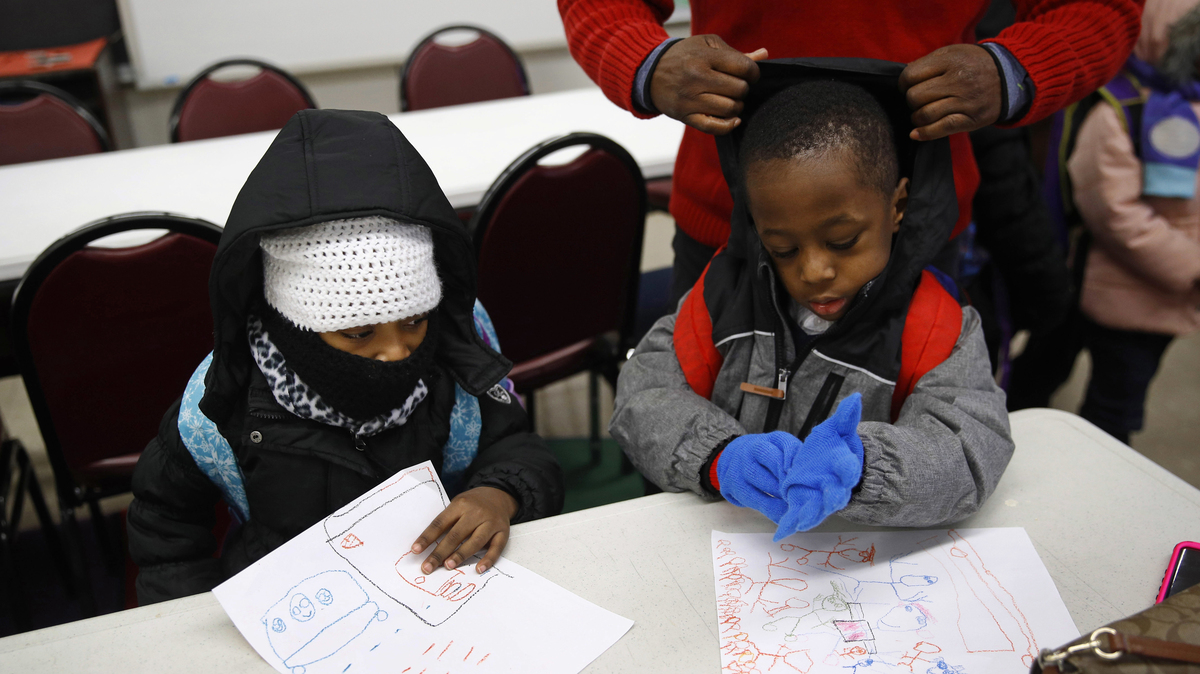 Teacher Loraine Wilson, top right, helps bundle up pre-kindergarten students as they wait to be picked up at the end of a school day at Lakewood Elementary School in Baltimore on Jan. 9. The day before, Lakewood students were sent back home just after arriving when pipes burst in the school.

Baltimore public schools' heating crisis earlier this month was a "day of reckoning" for the system, the city, and the state said public schools CEO Sonja Santelises. The crisis, she said in an interview with WYPR Wednesday, exposed the truth that Baltimore city school buildings are less than functional. As many as 85 of public schools in the city suffered heating problems over the course of a week, leaving students needing to wear coats inside classrooms that hovered around 40 degrees inside.

Santelises was responding to weeks of anger from parents and educators, including at an impassioned board meeting last week. "Shame on us," Lacheryl Jones, parent and education advocate, told the school board. When school buildings are decrepit and need to close because of unsafe conditions, she said, "[the children] are being prevented access to one of the greatest weapons they will ever have in this lifetime: the weapon of knowledge and empowerment through education." And the heating issue in the schools is just the tip of an iceberg of structural issues that have persisted for years, parents, advocates, and some legislators say.

In the weeks since the school problems, Baltimore city leaders have pulled together city agencies and private companies to make what emergency repairs they could to the public schools that saw pipes burst, boilers and furnaces break down, and ceilings collapse. But longer term fixes require money. And when it comes to the schools' funding, there's plenty of baggage — and blame — to go around.

Santelises will be traveling to the state capitol to advocate for what she calls fair and equitable funding throughout the 2018 General Assembly. She's encouraged parents and educators to do the same.

Republican Maryland Gov. Larry Hogan initially said he would not send aid to the schools because they had already received "record funding" that wasn't being spent wisely. Then, a day before the public school board meeting, Hogan announced he would send $2.5 million to city schools.

"Let me be clear, this is not to reward the people who are responsible who have failed. This funding is literally about saving kids from freezing in winter," Hogan said. "We simply cannot allow children to be punished year after year because their adult leaders are failing."

But Santelises denied any fiscal mismangement, telling WYPR and the school board there has been chronic "underfunding and underresourcing of Baltimore city schools."

The buildings are old and the weather was unprecedented, said city schools Santelises at that meeting, acknowledging she should have done better at communicating with parents and monitoring temps. She said at the time, they struggled to understand if the problems within a school were isolated to one or two classrooms or if the entire school was without heat.

She pledged to fix those internal problems that left students, teachers, and families out in the cold, but, she said, what was also exposed were decades of under-investment, guided year to year by "systemic policies that are undermining equitable access to high quality education."

At the board meeting, Santelises referred to hostile emails and phone calls from parents. She said she'd take all of it, because she knew they had the right to be angry. But what she also wanted to address in the public sphere was the mentality that "we ain't worthy of what everyone else is worthy of – that's the fight I want to have." Santelises said she needs the parents and grandparents to join her when she goes to the Maryland Statehouse to get the funding city students are due.

The losing end of a funding formula

The schools' funding formula is in the spotlight right now. The Baltimore city school board is not elected and how much money each pupil gets is decided by the state. In various ways, governors of the past and present manipulated the school funding formula – and that almost always negatively affected Baltimore city. For example, in 2008 (FY09) the state cut the inflation factor – a critical part of the education funding formula to ensure that school districts can keep up with growing costs (health care premiums, energy, transportation, food, etc.) That shorted city schools by $290 million dollars annually, says Frank Patinella, senior education advocate for the ACLU of Maryland's Education Reform Project.

City Schools were also promised money when casinos opened eight years ago. That revenue is in the billions. Some of it is going to city schools, but every year state lawmakers dump it in and take some money out for roads or other state projects. It replaces and doesn't add money to the city schools' coffer, which was the promise when it went on ballot.

News reports showed that Baltimore city schools returned $66 million in construction money to the state because they couldn't complete the projects in the time-frame allotted, which Hogan cited as evidence of mismangement. But the Baltimore city school administration often didn't have the money to front-fund the projects. Other school districts have that ability. While many said this shows a process that's not working at the statehouse, the governor pointed to this as an example of mismanagement and ineptitude by school leaders.

But, Santelises said the city schools are owed more than $358 million through FY15, according to the outside organization Augenblick, Palaich, and Associates. They were hired by the state of Maryland to conduct a study of adequacy of education funding in Maryland. She said she welcomed the numerous audits that have been done on Baltimore city schools in the past 18 months. The latest of those audits was performed by CliftonLarsonAllen. It showed similar findings to other audits: no fiscal mismanagement.

"You can hold me accountable," she told the public at the school board meeting. "We know the reasons why the narrative is always about incompetence in the city of Baltimore and it is obviously linked to the demographics of our city. We know why. We know why the knee jerk reaction is always 'let's do another audit of Baltimore city' ... because it MUST be that we have done something wrong."

"We are engaged in more audits this year in this city than any other jurisdiction in the state and you know why we do it? Because I know our young people have to have that money." she continued, "I am willing to have us called everything in the book because we're going after the money." The majority of Baltimore city students are black and qualify for free and reduced price meals.

Santelises told the public, who was irate about the heating problems, to go deeper and take on the systemic underfunding at the state level. "An informed community is a powerful community," she told WYPR.