Accessibility links
'Portlandia' Is Ending, And Portlanders Are OK With That The TV show's early sketches lovingly skewered the city's progressive optimism and "Keep Portland Weird" mindset. It was an image Portlanders embraced, then struggled with. 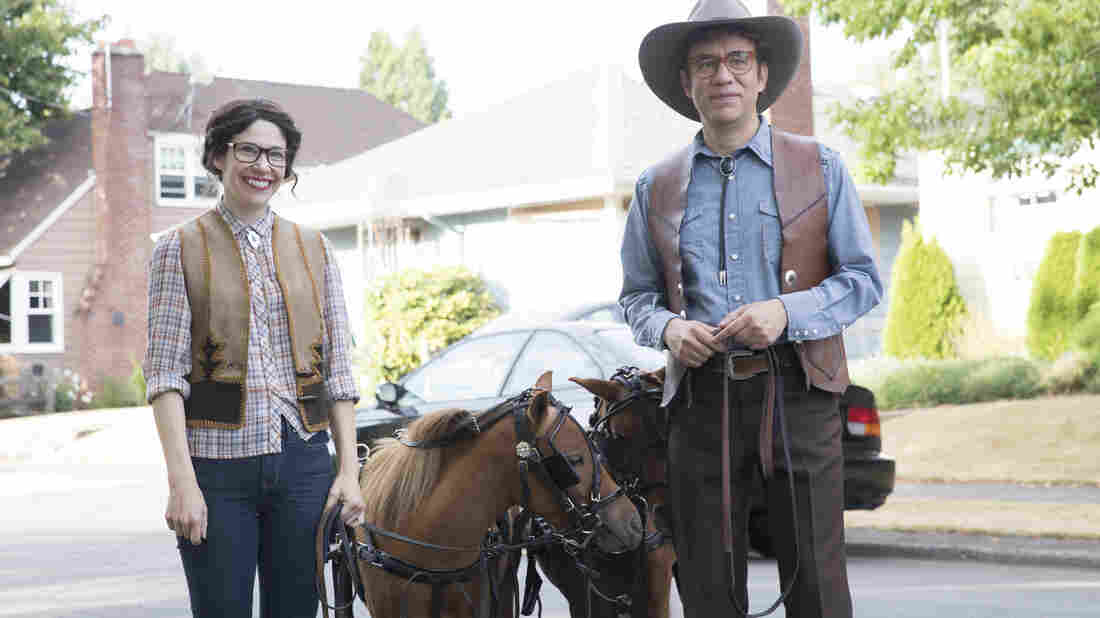 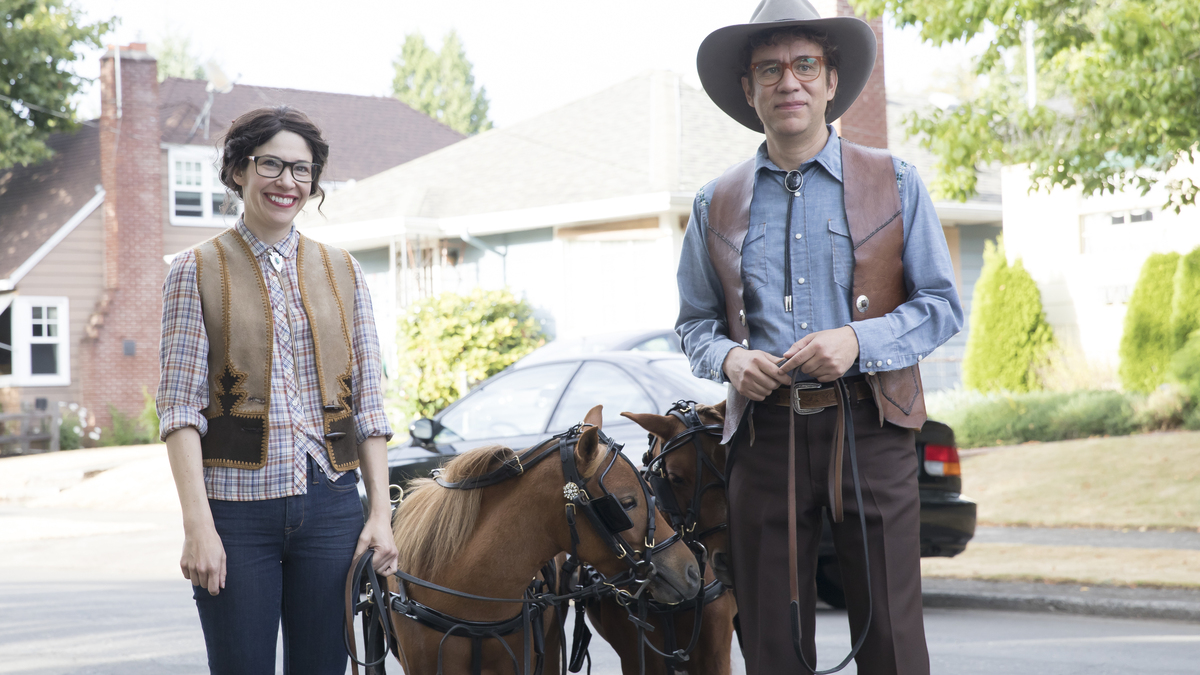 Carrie Brownstein and Fred Armisen star in the eighth and final season of Portlandia, which premieres Thursday.

There was a time when saying you lived in Portland, Ore., would get a response like, "That's above California, right?" Now, people not only know where the city is but also inevitably ask, "Is it just like the show?"

IFC's Portlandia, which begins its eighth and final season on Thursday, put Portland on the map as the capital of earnest urbanism at a time when words like "artisanal" and "locavore" were sweeping the nation. It was an image Portlanders embraced, then struggled with.

The "Dream of the '90s" sketch in the first episode coined the phrase that would define the show's take on Portland. It's a conversation between co-creators Fred Armisen and Carrie Brownstein, intercut with a surreal music video featuring circus performers and hipster types.

Armisen asks Brownstein, "Remember when people were content to be unambitious, sleep till 11 and just hang out with their friends? When you had no occupations whatsoever, maybe working a couple hours a week at a coffee shop?"

"Right," Brownstein answers. "I thought that died out a long time ago."

"Not in Portland," Armisen says. "Portland is a city where young people go to retire."

The early sketches lovingly skewered the city's progressive optimism and "Keep Portland Weird" mindset. Some locals joked that they bordered on documentary — like the infamous sketch about a couple at a farm-to-table restaurant asking after their chicken's provenance.

"The chicken episode cracks me up to this day," says Portland artist MK Guth, "partially because I can kind of see myself a little bit in it, you know. So I'm like, 'Oh wow, look, I am the person who knows where my eggs come from.' "

The show channeled a national zeitgeist. It seemed like everywhere people were pickling things, making jewelry and putting a bird on it. Brownstein says the show was meant as a funny sendup of things she and Armisen loved. "Portlandia was specifically not called Portland because it implied a heightened version of place; it implied an ideology, a mindset, a way of life."

The show's TV audience peaked in the second season, but its sketches soared across the Internet, reaching millions. Tiara Darnell started watching it while in the Peace Corps in Morocco.

"It just seemed like a really cool place to go and sort of figure myself out," she says. "That wasn't the only reason I moved to Portland or to Oregon, but it would be not truthful to say that didn't have some impression on me."

After moving, Darnell, who is African-American, starting seeing holes in the show. "I could probably count on one hand how many episodes actually have a black person even in it, even as an extra," she says. "And so it lends itself to this notion that Oregon and Portland are very white and there's no black people here. And for a while that weighed on me."

Darnell says it took a year or two for her to really connect with the black community in Portland. 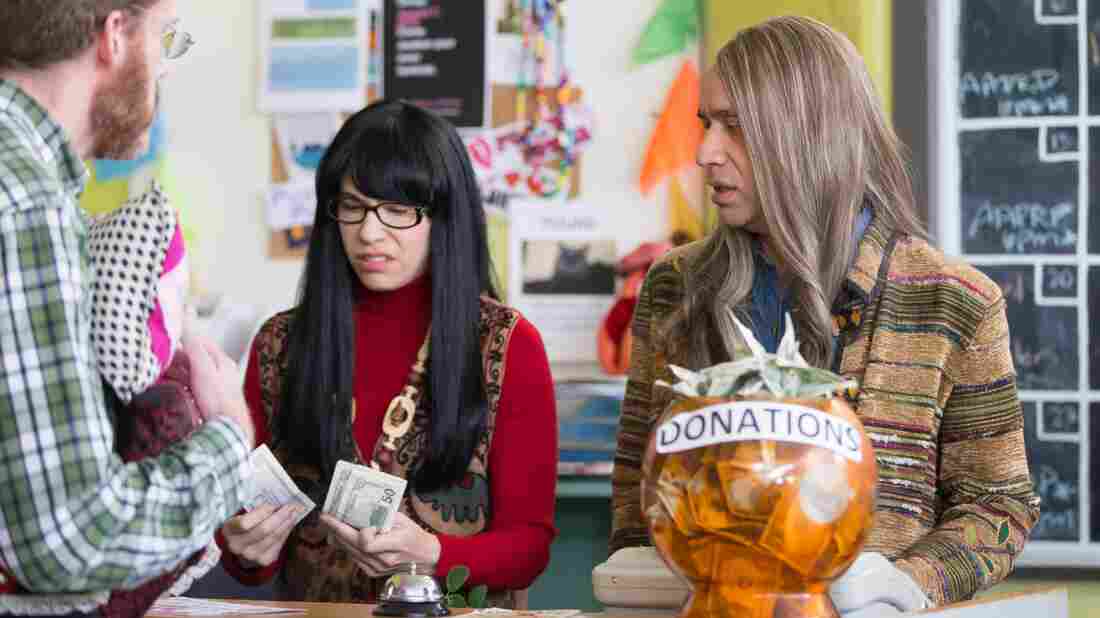 Brownstein and Armisen's feminist bookstore sketches have drawn criticism from the bookstore they were originally based on. Augusta Quirk/IFC hide caption 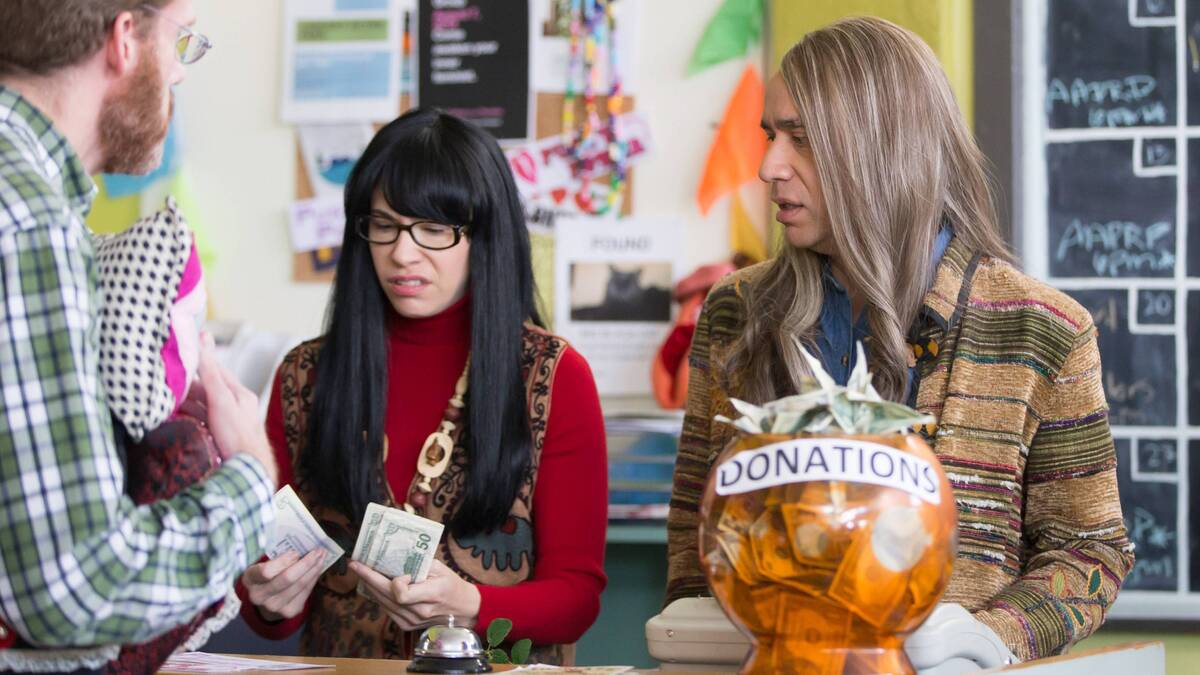 Brownstein and Armisen's feminist bookstore sketches have drawn criticism from the bookstore they were originally based on.

The city's popularity boomed, and not just because of the show. The cost of housing rose, and the "Dream of the '90s" started to sting when that part-time barista job no longer covered rent and your favorite dive bar was bulldozed for high-end condos.

Portlandia became a target for anger, and the most public backlash came from In Other Words, the feminist bookstore the show used for one of its most well-known ongoing sketches. In 2016, In Other Words got national attention when it posted a blog entry accusing Portlandia of mocking trans people, ignoring people of color, spurring gentrification and being bad for business.

Board member Nam Kennedy says visitors drawn by the show rarely turn into customers. "They'll stand outside or stand in our doorway and mock some of the things that we advertise in the space."

Portland Monthly Senior Editor Fiona McCann says it often felt like people weren't able to differentiate between Portland and Portlandia, and locals grew tired of being made fun of. "Pretty soon it started to feel to me like the same joke over and over again."

That said, McCann and others are grateful for the laughs Portlandia did provide, even if they're also happy to see it come to an end.

Ted Robbins and Andrew Limbong edited and produced this story for broadcast. Nicole Cohen adapted it for the Web.