Accessibility links
Women's Marches Across The Country Will Focus On The Vote On the anniversary of the Women's March in Washington, D.C., organizers say marches this year are less about outrage and more about political organizing. 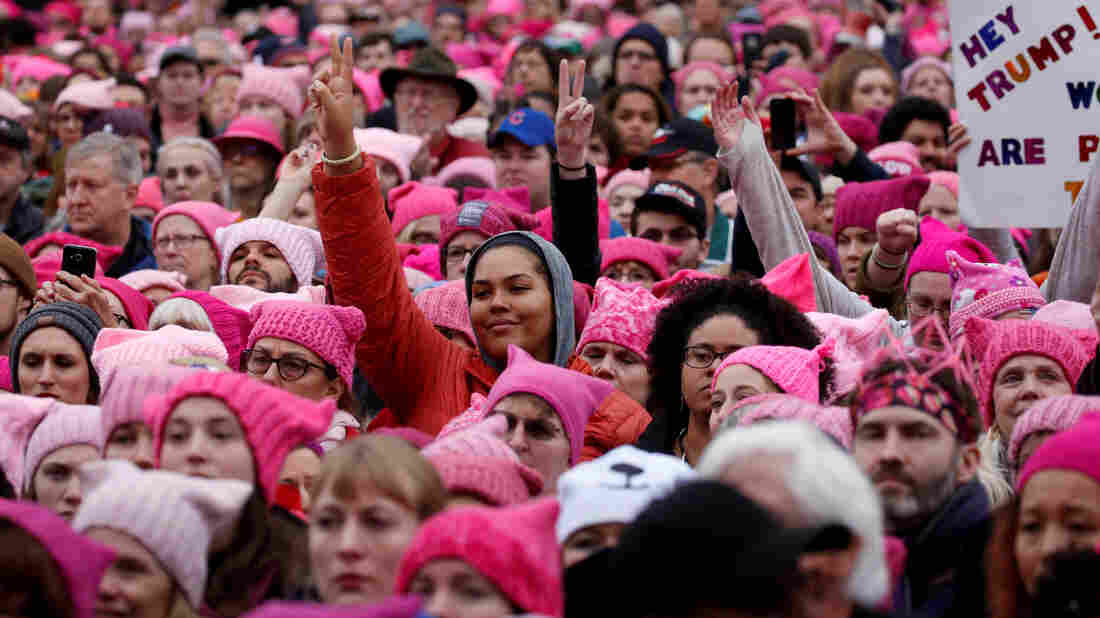 Hundreds of thousands gathered in Washington, D.C. on Jan. 21, 2017 for the Women's March. Organizers are rallying in Las Vegas this year. Shannon Stapleton/Reuters hide caption 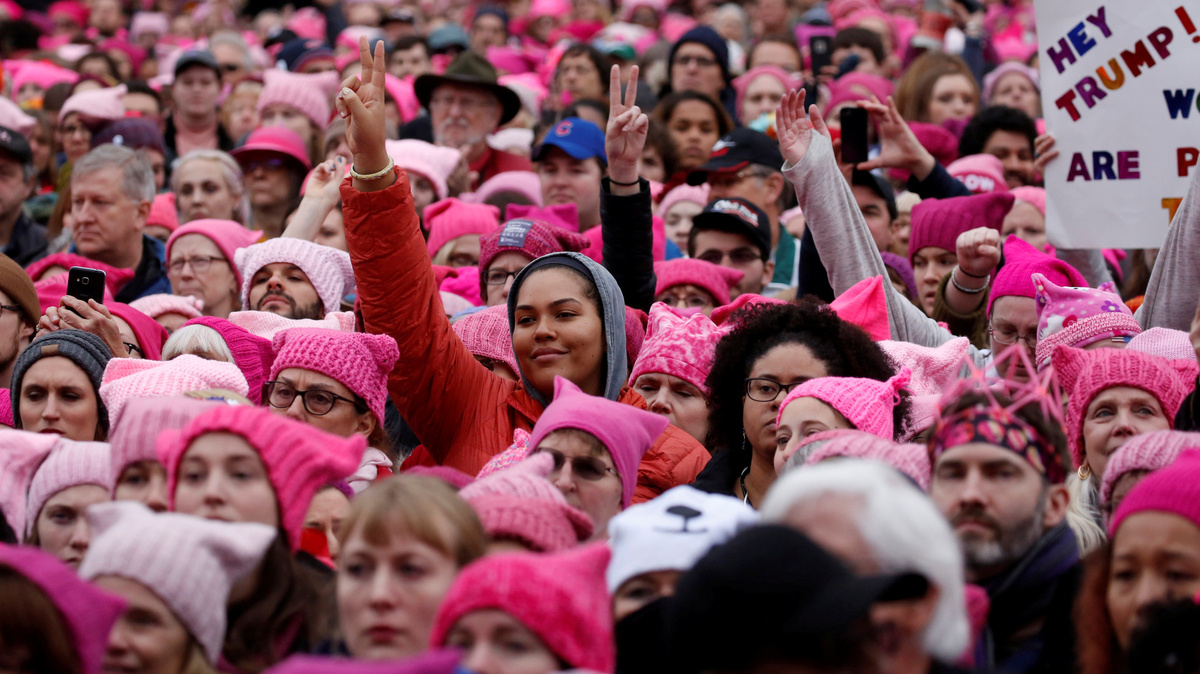 Hundreds of thousands gathered in Washington, D.C. on Jan. 21, 2017 for the Women's March. Organizers are rallying in Las Vegas this year.

On Sunday, people around the country will mark one year since the Women's March on Washington, D.C. Last year it brought hundreds of thousands of liberals to the capital, many wearing pink knitted caps in solidarity. Others marched in hundreds of cities and towns across the United States and more than 80 other countries.

Last year's march was definitively in protest of President Trump, coming just a day after his inauguration. A year on, the organizers of that national march are marking the anniversary with a rally in Las Vegas on Sunday as more than 300 towns and cities organize their own anniversary marches and rallies through the weekend.

With midterm elections approaching, the theme this year is less outrage and more organizing, dubbed "Power to the Polls." National and local organizers say they chose Las Vegas because it is an example of successful grass-roots progressive organizing. In 2016, Nevadans elected the country's first Latina senator, Democrat Catherine Cortez Masto.

"It was more important for us to create an event somewhere strategic to reflect the work that needed to be done in 2018. And Nevada is an example of a battleground state that went for Hillary Clinton and went blue in 2016," says Bob Bland, co-founder of the original march. "There are a record number of women running for local office and then also for state and governorship and there are competitive Senate races. We want to uplift that local work on a national scale on Jan 21."

Nevada, she says, is just the beginning. The Women's March organizers will be holding rallies in 10 other swing states.

The anniversary marches and rallies come in the midst of a movement against sexual violence. Women who wrote to NPR from across the country say they are marching this weekend to express concerns about immigration policies, environmental policies, women's rights, the gender pay gap, health care and more. But mostly they're doing it to show they are a powerful voice that wants to get more women like them into positions of power at the local, state and national level, they say.

That, Bland says, is the point: getting people to vote and removing barriers to voting for marginalized communities.

"If people mobilized a bus to the Women's March, they can also organize transportation routes to make sure people from low-income housing in their community can get to the polls," she says. "There's a lot of different ways that all of the organizing work, all the education we've done during the 2017 resistance, can be converted to our collective power at the polls."

Emily's List, an organization that coaches Democratic women on running for office, says it has trained more than 26,000 women to run for local, state and national office. Its motto: "You marched. Now run."

The march last year was criticized for being a crowd of mostly white, liberal women. Organizers say the aim this year is to harness the grass-roots work they did over the past year to represent a cross section of America, including people of color, LGBTQ people, the disenfranchised and women across the country.

"Diversity does not come without intention and it doesn't come without authentic relationship-building. And that is something that takes time," Bland says. "We are making those changes and we are making a lot of progress. But this is work that we have to commit to every day. And white women in particular have to take responsibility for holding each other accountable to creating open, welcome spaces where communities of color know they are listened to."

The roster of speakers in Las Vegas is a who's who of liberal politicians, celebrities and civil rights activists. They include Planned Parenthood President Cecile Richards, co-founder of Black Lives Matter Alicia Garza, actress Marisa Tomei, several female congresswomen including Masto, and the four co-chairs of the Women's March.

While organizers say conservative women are welcome, many conservatives say they don't feel welcome at the marches and rallies because of their political leanings or support for the president. After all, organizers openly call themselves "the resistance."

We asked women to write to us and tell us why they marched last year and what they march for this year. Here's a sampling of what they had to say:

"For my mother, my ancestors, for those who cannot, for myself, for my nieces. To show the rest of the red state of Tennessee that women's rights are not just BLUE, they are all encompassing. You don't have to be a Democrat to support women. And just because you support Republican values doesn't mean you're against women. It's a human thing. This idea needs to change." — Melissa Shah of Nashville, Tenn. She plans to march in Nashville.

"Protections for the environment have been undermined, racist and xenophobic policies have been proposed. This is an election year, and we have the chance to truly let our voices be heard." — Julie Albert of Anchorage, Alaska. She plans to march there.

"After coming out of my shell as a brown female I've realized that women love to be feminists when it is only convenient for them — this meaning until it has to do with people of color, LGBTQ and any other forms of internationalism that there is a lack of inclusion from white women. Women of color and those who identify are still having to push themselves into spaces where they belong in the first place because feminism is about equality for all but that message seems to be lost." — Sanjana Stein of Denver, Colo. She marched last year in Washington, D.C., but this year has chosen not to participate.

"Now more than ever we need to speak up, show up and be active citizens. My adopted 16-year-old daughter is a biracial Latina, and I am attending the Women's March again, alongside her, in order to show her that our voices matter, and that the power of a strong, intelligent and diverse population is what makes America worth protecting." — Andrea Morgan of Ovando, Mont. She will march in Missoula, Mont.

"Last year's march was incredibly impactful and resonated with women internationally. After the march I felt empowered, and I was driven to be more politically and civically active. This year, I have been selected to speak on the #MeToo movement in our local march and I could not be more proud to call my fellow townspeople to action on issues that are important to me and many others. This march is focusing in large part on civic engagement and I hope to be inspired to do more and inspire others to engage in local and state elections, not just national elections." — Elisabeth Malloy of Statesboro, Ga. She will march in her hometown as she did last year.

"I am transgender and I'm furious. I'm tired of blatant disrespect ... I feel if I did not attend the Women's March when I am fully able to and free then I would be failing my duty to my community, fellow minority communities, and myself. I will not surrender to discrimination." — Coryn Rinta of Boston. She will march in Providence, R.I.

An earlier Web version of this story quoted Bob Bland as saying Nevada voted for a Democratic presidential candidate for the first time in 2016. Nevada is a longtime swing state that went to Barack Obama in both the 2008 and 2012 elections.