Accessibility links
How The Man In The Apartment Hit Big With 'The Woman In The Window' Take a pinch of Hitchcock, a bit of Gone Girl, stir in a mysterious author and you've got the recipe for something unusual: One of the rare debut novels to hit number one its first week on the market. 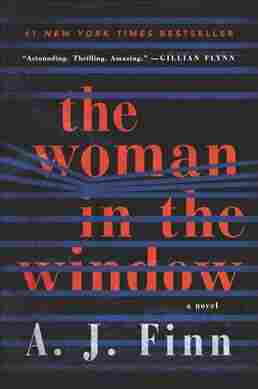 The Woman in the Window

Title
The Woman in the Window
Author
A. J. Finn

Take a little Hitchcock and a touch of Gone Girl. Add in a mysterious author and rumors of a very big price tag. Stir them all together and you come up with a rare bird: A debut novel that hits number one on the New York Times bestseller list in its first week on the market.

Brand name authors like James Patterson or Stephen King hit the top of the Times list in the first week all the time. Unknowns like The Woman in the Window, not so often. "It is very unusual," says Greg Cowles, the longtime writer of the Times' "Inside the List" column. He says the buzz has been building since a hotly contested auction for the novel, by an unknown author named A.J. Finn. Turns out that's a pseudonym for Daniel Mallory, an executive editor at William Morrow, the publishing company that bought the book. But Cowles says even with all that interest, no book is a sure bet. "You really never know despite the buzz, despite the huge advance sales, the publishers themselves never know, will this book hit. You can't manufacture a best seller."

Mallory himself probably would know how to manufacture one. He has spent a lifetime reading, studying and editing mysteries and thrillers. And when Gone Girl sparked a trend in psychological thrillers with an unreliable female narrator, he was tempted to jump on the bandwagon "When Gillian Flynn published Gone Girl I thought 'Aha, this is the sort of book I've loved and could possible try to write,'" Mallory says. "The trouble was, I didn't have a story."

Mallory didn't want to put a mystery together like a jigsaw puzzle. He wanted the book to have substance. He was also suffering from depression, which he later discovered was misdiagnosed. "For days and weeks and even months at a stretch during the 15 years in which I struggled with misdiagnosed bipolar disorder, there were times when I couldn't prize myself from bed, let alone leave the house," he says.

While adjusting to new medication, Mallory took some time off from work. He watched a lot of old moves — his other great passion. And one day as Hitchcock's Rear Window played in the background, he looked out his own window and noticed his neighbor across the street.

"In accordance with fine Manhattan tradition, I watch her for a couple of minutes. She is settling herself in an armchair, aiming a remote at the TV, and behind me onscreen, Thelma Ritter is chiding Jimmy Stewart for peering across the courtyard into Raymond Burr's apartment," Mallory says. "And I thought to myself, how funny that in 1954, Jimmy Stewart is spying on his neighbors, and I'm doing the exact same thing 60 years later. And just like that, an idea for a story presented itself. And striding towards that story from another corner of my brain was this character who had struggled, as I had struggled, with mental health issues, and whose grief seemed comparable to mine in intensity although the circumstances were very different from my own."

I thought to myself, how funny that in 1954, Jimmy Stewart is spying on his neighbors, and I'm doing the exact same thing 60 years later. And just like that, an idea for a story presented itself.

That character is Anna Fox. She suffers from agoraphobia, and gets panicked if she even feels the air outside her front door. "She was once a respected child psychologist, but she has withdrawn from her profession and indeed from the world, in the wake of some sort of trauma, and we don't learn the details of that trauma until two-thirds of the way through the book," Mallory says. "She does try to occupy herself as best she can. She learns French. She counsels fellow agoraphobes through a digital forum, and she watches old films — they form a sort of soundtrack to her life."

She also drinks a lot of red wine, which she mixes recklessly with her meds. And she spends a great deal of time spying on her neighbors with a long-lens camera. One day when her mind is especially foggy, she is watching Dark Passage, just at the moment that Humphrey Bogart is going under anesthesia. As the film plays, Anna looks in her neighbor's window and thinks she sees a murder.

The victim is a woman who has befriended Anna — but no one believes Anna ever met her, much less saw her get stabbed to death. The murder is only one of the mysteries that will keep readers guessing. Mallory takes his time revealing why Anna is so traumatized that she cannot leave her house. "What I can say about this particular dimension of the book is that I consider it the heart of the story, and whether you anticipate its details or parameters — or not — is sort of by the bye. It's really incidental. It's not about surprise, it's not about a jack-in-the-box effect. It's about how such an event would impact someone, how they would cope with it, and how they would struggle to move past it," he says.

In the tradition of many mysteries, Mallory set his story in a confined space. His next book — which he is already working on — is set in a big city, San Francisco. And he says it feels great to get a breath of fresh air.

This story was edited and produced for radio by Tom Cole, and adapted for the Web by Petra Mayer.