Accessibility links
Crime Is Down In American Cities, And 'Uneasy Peace' Explains Why Contrary to what you might see on TV, homicide, assault and rapes have decreased in big cities since the 1970s. Patrick Sharkey attributes the change, in part, to something that happened in the '90s. 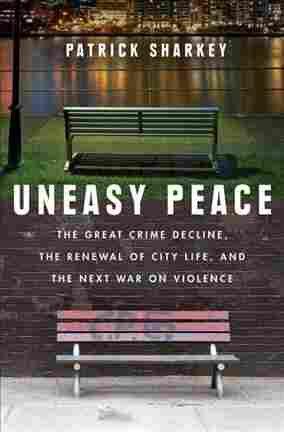 The Great Crime Decline, the Renewal of City Life, and the Next War on Violence

Title
Uneasy Peace
Subtitle
The Great Crime Decline, the Renewal of City Life, and the Next War on Violence
Author
Patrick Sharkey

Violent crime is down in America's big cities.

It may not seem so if you watch crime dramas like CSI, NCIS or Chicago P.D., but homicide, assault and rapes have decreased in big cities since the 1970s. Even Chicago had a 16 percent decline in murders last year, to 650. (In 1974, the city had 970 homicides.)

Patrick Sharkey, chair of NYU's sociology department and scientific director of Crime Lab New York, attributes the change, in part, to something that happened in the 1990s. He says, "The entire country, really kind of for the first time in a while, saw violence as a national crisis and mobilized to deal with it."

Sharkey's new book is Uneasy Peace: The Great Crime Decline, the Renewal of City Life, and the Next War on Violence.

On how the country mobilized to reduce crime in the 1990s

But another piece of this that I kind of draw attention to in the book is there was also a mobilization in the communities hit hardest. Residents organized and really started to fight against violence, started to fight to take back public parks, playgrounds, public streets. And I think all of these things together explain why violence started to fall.

On increased policing and tougher sentences

[Those] did have an effect. If we're having an honest conversation, then those factors are part of the conversation.

They also brought great costs as well. So we have millions of Americans who are under the surveillance of the criminal justice system. We've all seen the instances of aggressive or violent policing. So these are part of the reason why crime fell, but they've also brought some of the worst costs of the crime decline as well.

In Bid To Curb Violence, Chicago Gets Some Ideas From Teens Behind Bars

On the connection between reduced crime and gentrification

We've looked at how the crime drop has affected changes in the population of low-income neighborhoods, and what we've found is that as violence declines, new populations enter into very poor neighborhoods. It's a drop in the degree which the poor are kind of isolated, separated, from the rest of the city. Now, nationally we've found no evidence that this leads to displacement of the poor. What it means is that residents with more education [and] higher income are moving into neighborhoods where poverty was concentrated. ... [The poor] are not pushed out to a large extent. That's one of the findings that we have.

Now, in some cities — in New York and San Francisco — there are very visible examples where this happened, so I certainly don't want to dismiss it. ... So in those cities, it's crucial that we have policies in place that preserve affordable housing [and] make sure people are not displaced, not just physically, but also culturally, politically.

On the ripple effects of a lower crime rate

Beyond the lives that have been preserved, we have found gains in things like economic mobility. So in places that have become safer, we found a causal effect on the chance that children from low-income families will move upward out of poverty as they reach adulthood.

We've found impacts on academic performance; so in the places that have become safest, academic achievement has improved the most. And actually, racial achievement gaps have narrowed the most in the places that have become safest. And beyond all that, I think the most profound changes is just in the experience of urban poverty. So across the country, for several decades, living in poverty used to mean living with the constant threat of violence. That hasn't gone away. There are certain cities that are still intensively violent, but it's no longer true in most of the country.

Ian Stewart and Barrie Hardymon produced and edited this interview for broadcast. Sydnee Monday and Nicole Cohen adapted it for the Web.