Accessibility links
Not My Job: TV Weatherman Al Roker Gets Quizzed On Coldplay The Today show anchor answers three questions about the hit-making British band that was founded 20 years ago. 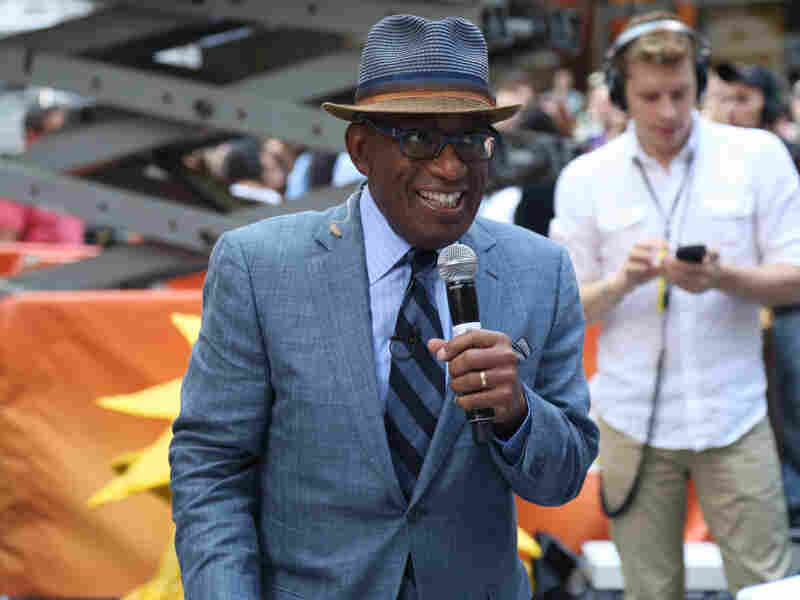 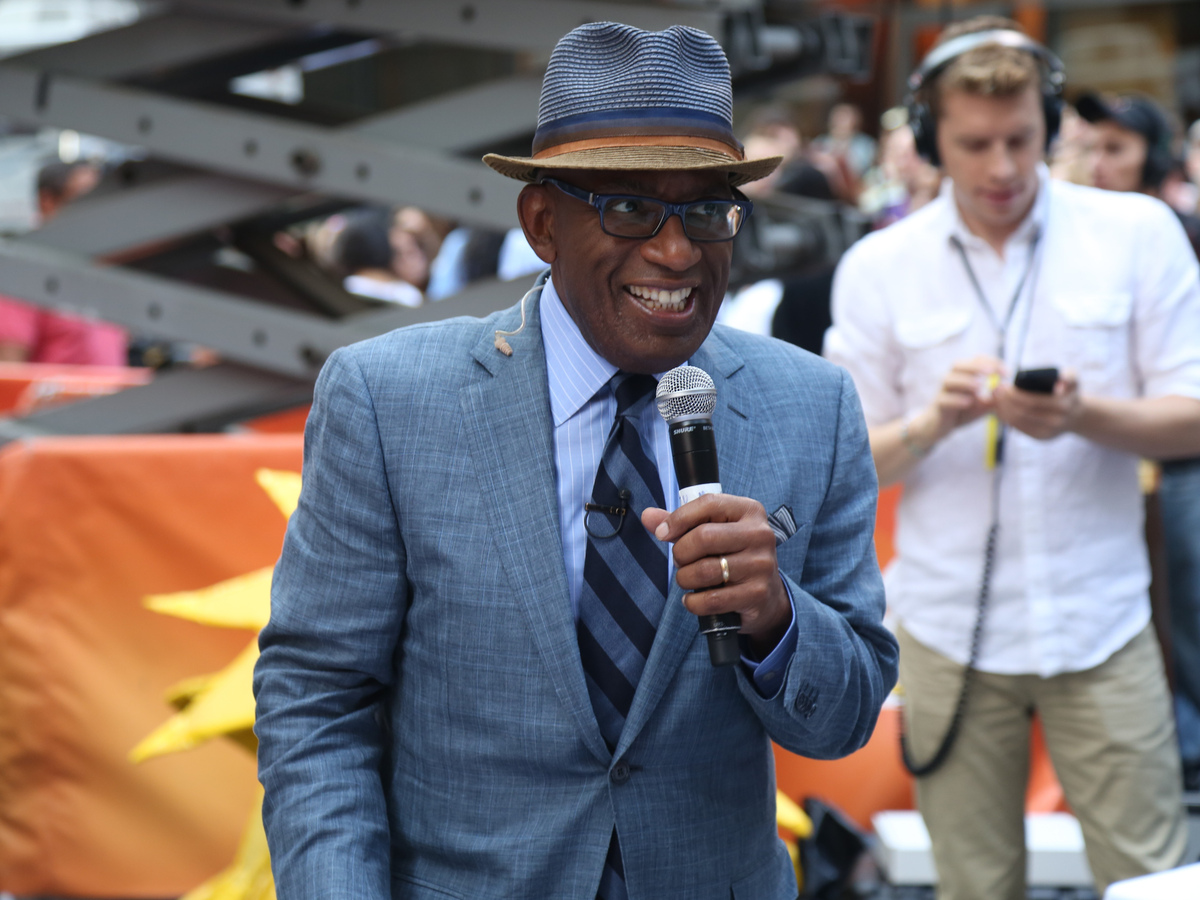 Al Roker may be the most famous weatherman in the country, doing forecasts on the Today show since 1996, but he's much more than that — he's an author and game-show host and face of the Thanksgiving Day Parade. He even got the first interview with newly sworn-in President Barack Obama simply by yelling at him.

Al Roker may know his way around a cold front and a cold snap ... but what does he know about Coldplay? We've asked him to answer three questions about the British band that was founded 20 years ago this week.

And now the game where people who've done a lot of things do one more thing. Al Roker may be the most famous weatherman in the country. He's been doing forecasts on the "Today Show" since 1996, but he is much more than that. He is an author and a game show host and the face of the Thanksgiving Day Parade in New York. And - this is true - he got the first interview with Barack Obama as president by yelling at him, come on over and talk to me. And it worked. He's Al Roker. So in that spirit, Al Roker, come over. Talk to us on WAIT WAIT... DON'T TELL ME. How are you?

SAGAL: There are so many things to talk to you about, Al, but why not start at the beginning? You came up doing different things in television. And the first time they said, we want you to do the weather, what did you say?

ROKER: I said, how much?

SAGAL: There you go. I have to ask you because I don't - morning television, I know, you have to be cheerful because that's what people want, right?

SAGAL: They're getting going. They want to turn on the TV and see really attractive, nice people being nice and cheerful.

SAGAL: Mostly attractive. Have there been days - because this happens to me - where you just wake up, and you're just not in a good mood, and you have to go and, like, be cheerful for the "Today Show" audience?

ROKER: Well, yeah. You know, it's funny you said this because it was about six months ago. And my daughter just - her room was a mess, and I just let loose on her. I mean, I just, - like, this place is a pigsty. It's a mess. And all of a sudden, she burst into tears. And she goes, this isn't fair. America gets to see happy Al Roker...

SAGAL: That cuts to the bone. Oh, my God.

PAULA POUNDSTONE: You know, Al, though - I may be different than much of America, but I don't want cheery when I turn on morning television...

POUNDSTONE: ...Or morning radio. No, I want them to be about where I am. You know, you guys - to do a morning broadcast, you get up at like 2 or 3 in the morning, right? So by the time it's on the air, you guys are already fired up and going.

POUNDSTONE: I want you to be like, (groans) let's check the weather.

ROCCA: All right. I have a - this is way, probably, too inside, but I have a question. I've always wanted to ask you this, Al.

ROCCA: And you throw to the local person.

ROCCA: And I travel a lot. And wherever you are - and it could be, like, Grand Forks, N.D. - there'll be, like, a 25-year-old weatherman who will then go (high-pitched), thanks, Al, in really super familiar way.

ROCCA: And, sometimes, I get really annoyed, and I yell at the TV. I say, you don't know Al. Why are you acting like you're trying to fool the people that - because, seriously, it's hundreds of people around the country. Do you know that they do that, and does it kind of annoy you that they're being super familiar with you?

SAGAL: So you're asking Al Roker if he is upset that the thousands of local weatherman who take his throw...

SAGAL: So, Al Roker, would you like to tell the weatherpeople of America that you're not actually their friend?

ROKER: I am. I am their friend.

SAGAL: You are their friend.

ROKER: I am their friend.

ROCCA: But you know that they do that, don't you?

ROKER: If that's something that's going to bother me, it's time for me to get out of this business.

ROCCA: I think they should say, thanks, Al. I hope to one day meet you. Here's what's happening in Grand Forks.

ROCCA: Or thanks, Mr. Roker.

SAGAL: Exactly. Thank you, Mr. Roker, whoever you are.

ROCCA: For that throw.

SAGAL: So, Al, you're not just an anchor. You are also a writer and a chef. In fact, one of your novels is going to be on TV - in a film adaptation - right?

ROKER: That's right. On Hallmark Movies and Mysteries this weekend, it's going - it's Al Roker's "Morning Show Mystery: Mortal Mishaps." And Holly Robinson Peete plays Billie Blessings, and she's a morning show co-host and a chef. And her executive producer is poisoned by a cake that she baked. And all fingers point to her, and she's got to prove herself innocent.

ROKER: I could kill my executive producer.

SAGAL: So you're - you, as many people may know, are a morning TV show co-host who is also an acclaimed amateur chef.

SAGAL: And you have written a book in which your - the character - a TV co-host and chef - is accused of murdering her own executive producer.

SAGAL: And the executive producer of the "Today Show" thought what of this book?

ROKER: Well, I don't know. He died before he told me.

POUNDSTONE: You might want to try to off some of those local weathermen.

ROKER: That's right. Here's what's happening in your neck of the woods. It's a bomb.

SAGAL: Well, Al Roker, you - this is, like, not a surprise to the entire nation, but you're delightful to talk to.

SAGAL: And we have - we would love to talk to you all day. But, in fact, we have invited you here to play a game we're calling...

BILL KURTIS: We were all yellow.

SAGAL: So, Al Roker, we were thinking, you know your way around a cold front and a cold snap, but what do you know about Coldplay...

SAGAL: ...The British band that was founded 20 years ago this very week? So we're going to ask you three questions about the band Chris Martin used to escape from Gwyneth Paltrow for a few hours...

SAGAL: Get two right, and you'll win our prize for one of our listeners. Bill, who is Al Roker playing for?

SAGAL: All right. First question. Coldplay, apparently, the band - the music can have strong effects on the people who hear it, as in which of these real life cases? A, in 2007, a Seattle woman was arrested for attacking a guy who was singing a Coldplay song at karaoke just to make him stop; B, their hit song "Fix You" caused a worldwide uptick in therapist appointments in 2005 or C, lead singer Chris Martin was credited for inspiring the trend of men looking like they haven't shaved for exactly three days?

ROKER: I'm going to go with A.

SAGAL: And you'd be right, Al.

SAGAL: It was a karaoke thing.

SAGAL: A woman attacked this guy to stop him from singing a Coldplay song. And if you guessed the song was "Yellow," you would be right.

SAGAL: Next question, Al. The band's name, Coldplay, has an unusual origin story. What is it? A, it's a reference to Chris Martin's boyhood refuge, a walk-in refrigerator...

SAGAL: ...B, the band met in a basement theater production of "Our Town" where the furnace did not work or C, there was another band named Coldplay, but they thought it was too depressing a name, so they gave it away to Chris Martin?

SAGAL: And, Al, once again, you are correct.

SAGAL: Another band got - another guy named his band Coldplay, and then he said, that's too dark and depressing. And Chris Martin...

POUNDSTONE: Why is that dark and depressing?

SAGAL: He just thought it was. He ended up - that guy - naming his band Keane for some reason.

ROKER: That worked out well for him.

SAGAL: So here's your last question to see if you can be perfect to this. We have to talk about, of course, Gwyneth Paltrow, who was married to the lead singer, Chris Martin, for a while. She gets a lot of headlines - more than he does - for her lifestyle advice. Which of these is something that Gwyneth Paltrow has really told people to do? A, be nice to water because it has feelings; B, get stung by bees on purpose or C, take medical advice from a ghost?

ROKER: I'm going with B.

SAGAL: You're going to go with which?

SAGAL: In fact, B is correct, but so is A and C. She has done all of those.

SAGAL: She's amazing. Bill, how did Al Roker do on our quiz?

KURTIS: In his neck of the woods, he got them all right.

ROCCA: I want to thank him at the end.

SAGAL: OK. All right. All right. So here we go. So Mo has asked if he can thank Al Roker. So I'm going to do the outro, and then you take it over, OK?

SAGAL: Here we go. So Al Roker is a co-anchor on NBC's "Today Show." "Morning Show Mystery: Mortal Mishaps," the movie adaptation of his book, premieres on the Hallmark Channel this Sunday. Al Roker, thank you so much for joining us. Oh, wait. You want to do that?

ROCCA: (In high-pitched voice) Thanks, Al.

SAGAL: Al Roker, thank you so much.

ROKER: I hate it when you weatherpeople do that.

COLDPLAY: (Singing) I wrote a song for you and all the things you do. And it was called "Yellow." So then I...

SAGAL: In just a minute - take a deep breath - it's our Listener Limerick Challenge. Call 1-888-WAITWAIT to join us on the air. We'll be back in a minute with more WAIT WAIT... DON'T TELL ME from NPR.