Accessibility links
Government Shutdown: Chuck Schumer, White House Respond By Pointing Fingers The president is marking the first anniversary of his inauguration with a government shutdown. Lawmakers are back at the Capitol trying to break the impasse — and playing the political blame game. 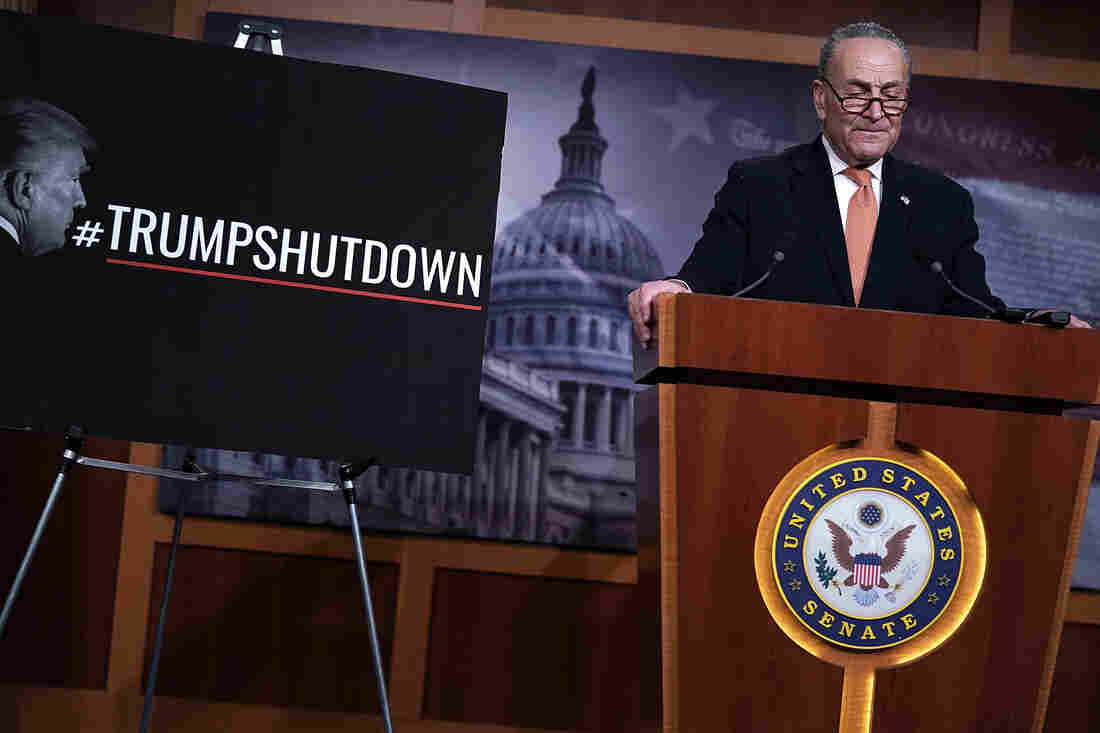 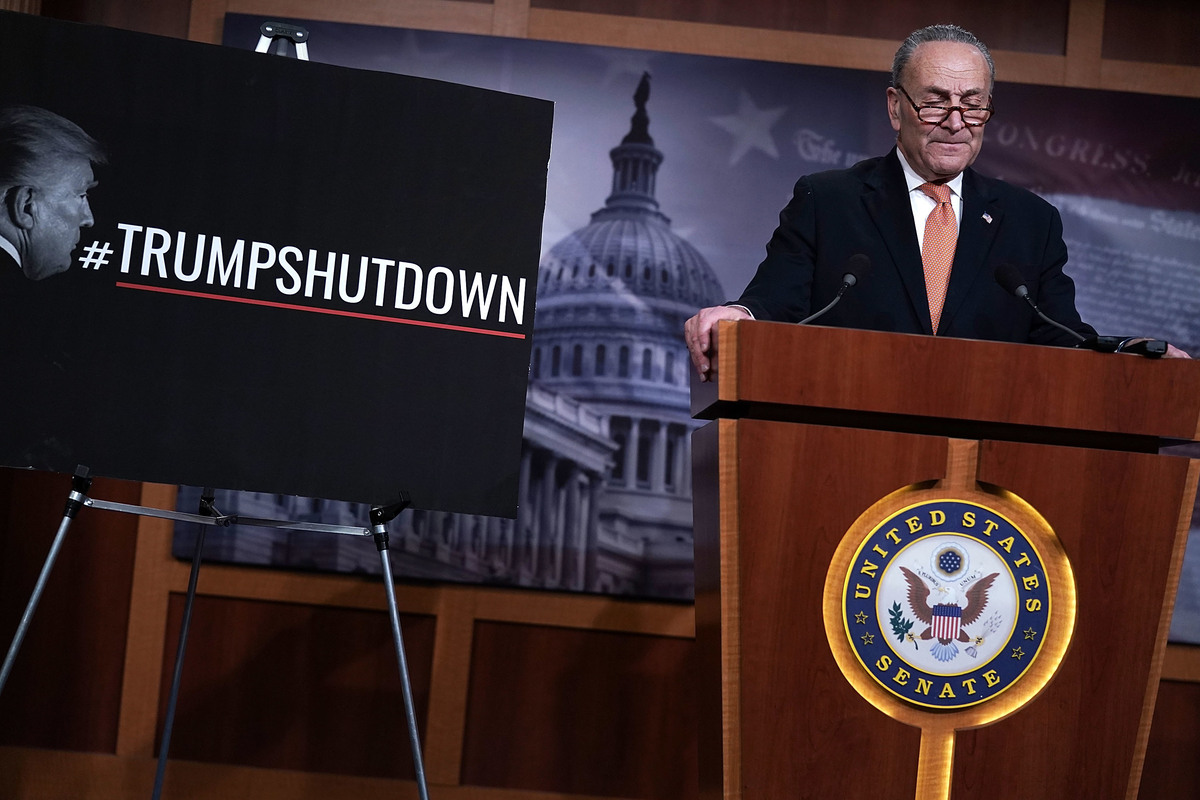 The federal government is in the midst of a partial shutdown, and it appears it will be that way for some time.

President Trump and members of Congress publicly say they want to reopen the federal government, but, in the first day of a shutdown, Republicans and Democrats on both sides of Pennsylvania Avenue showed no signs of ending their stalemate.

In a midafternoon press conference Saturday, White House Legislative Affairs Director Marc Short reiterated the position of the president and congressional GOP leadership that they will not negotiate on immigration and the Deferred Action for Childhood Arrivals program while the government is shut down. Short also placed blame on Democrats.

"We continue to remain anxious to reach a deal on DACA, and we look forward to resuming those negotiations as soon as the Senate Democrats reopen the government," Short said.

Members of the House and Senate reconvened at the Capitol on Saturday to try to find a way to resolve the impasse. There was hope that lawmakers would quickly take up a patchwork resolution that is all of one week shorter than the measure that failed late Friday night in the Senate.

As it was in the days leading up to the shutdown, the gears of a political blame game kept rolling Saturday morning. Trump was tweeting at dawn, blaming Democrats for the lapse in government funding as the Senate failed to advance a four-week extension overnight.

Trump accused Democrats of choosing "unchecked illegal immigration" over the military. Democrats say he has not kept his word to find a deal to protect immigrants who came to the country illegally as children and have been shielded from deportation by the DACA program.

Democrats are holding our Military hostage over their desire to have unchecked illegal immigration. Can’t let that happen!

Trump has canceled plans to travel to his Mar-a-Lago resort in Florida over the weekend, where he was to attend a gala fundraiser Saturday to commemorate his inauguration one year ago.

Office of Management and Budget Director Mick Mulvaney told reporters Saturday at the White House that the president's planned trip to the World Economic Forum in Davos, Switzerland, next week may not happen if the shutdown lingers.

"The president will not be going to Florida now, and we're taking Davos both from the president's perspective and the Cabinet perspective on a day-by-day basis," Mulvaney said. 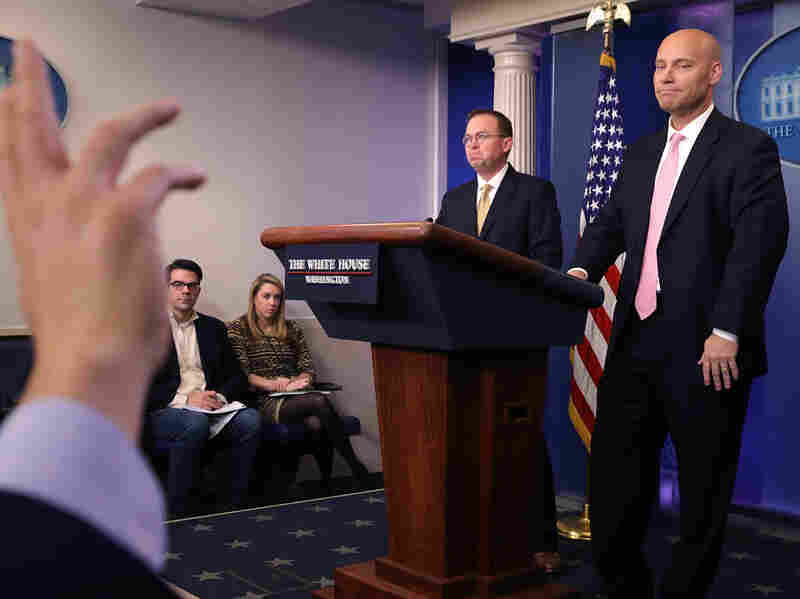 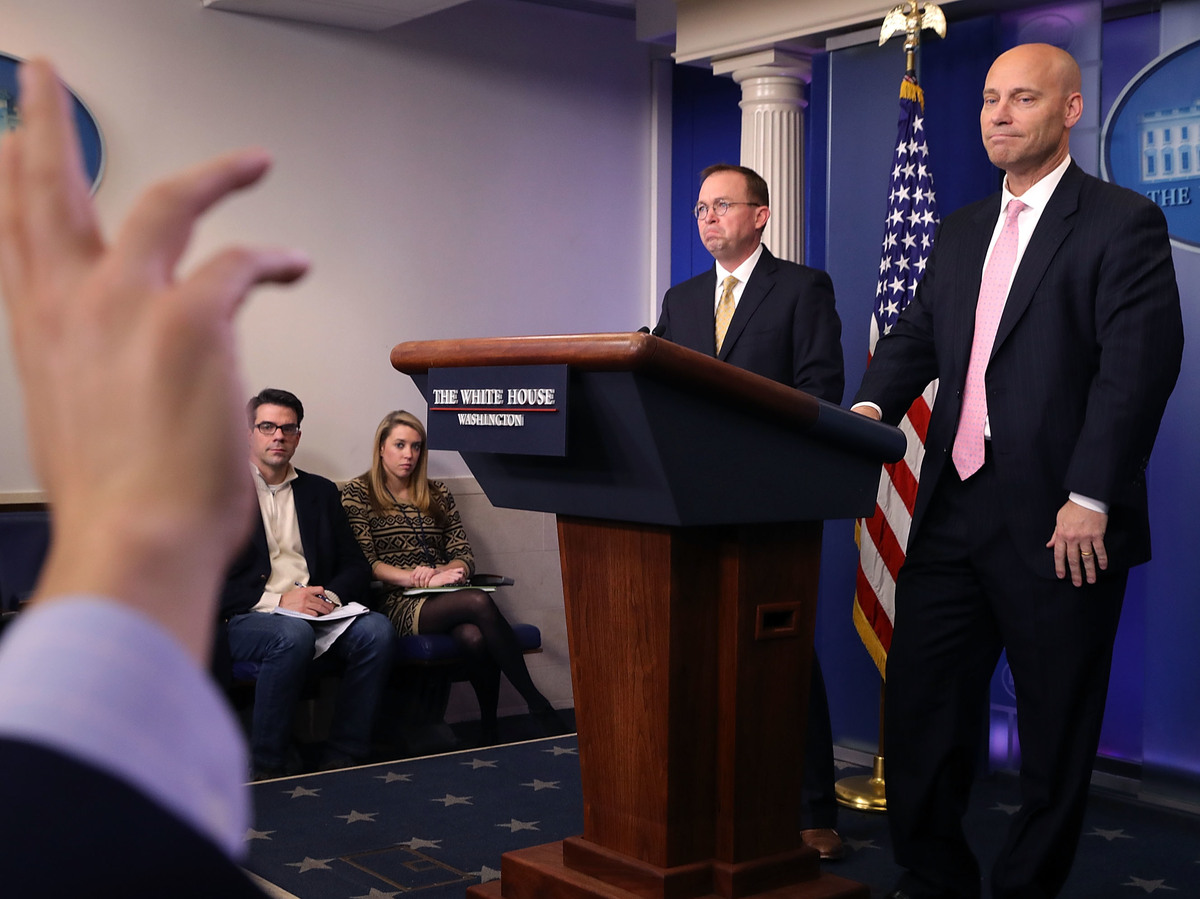 The latest shutdown is an unprecedented situation, given that most usually happen in times of divided government. This is the first time it has happened with the same party controlling both Congress and the White House.

Saturday afternoon, Senate Minority Leader Chuck Schumer, D-N.Y., said it was the president's "intransigence" that led to the shutdown.

"He's rejected not one, but two viable bipartisan deals," said Schumer, who had met with the president Friday in attempt to broker a deal.

The working proposal on the table, as outlined by Senate Majority Leader Mitch McConnell, R-Ky., early Saturday morning, is virtually the same stopgap resolution that the House passed but with a Feb. 8 expiration date instead of the original Feb. 16 date.

In other words, it does not have any substantive changes on immigration or long-term spending, which would be key to a longer resolution.

Senate Republicans had hoped to hold a procedural vote to move forward on Feb. 8 proposal later Saturday, but Senate Democrats have yet to yield back debate time. If Democrats do not, that vote cannot happen before very early Monday, per Senate rules.

The House approved a "same-day rule," 235-170, on Saturday night that will give House GOP leaders the flexibility to expedite another stopgap funding bill through Jan. 29, if, or when, a deal is made to reopen the government. The House is essentially in a waiting period to see what the Senate comes up with next.

House Speaker Paul Ryan, R-Wis., speaking from the House floor Saturday sought to cast blame for the shutdown squarely on the shoulders of Democrats in the upper chamber. 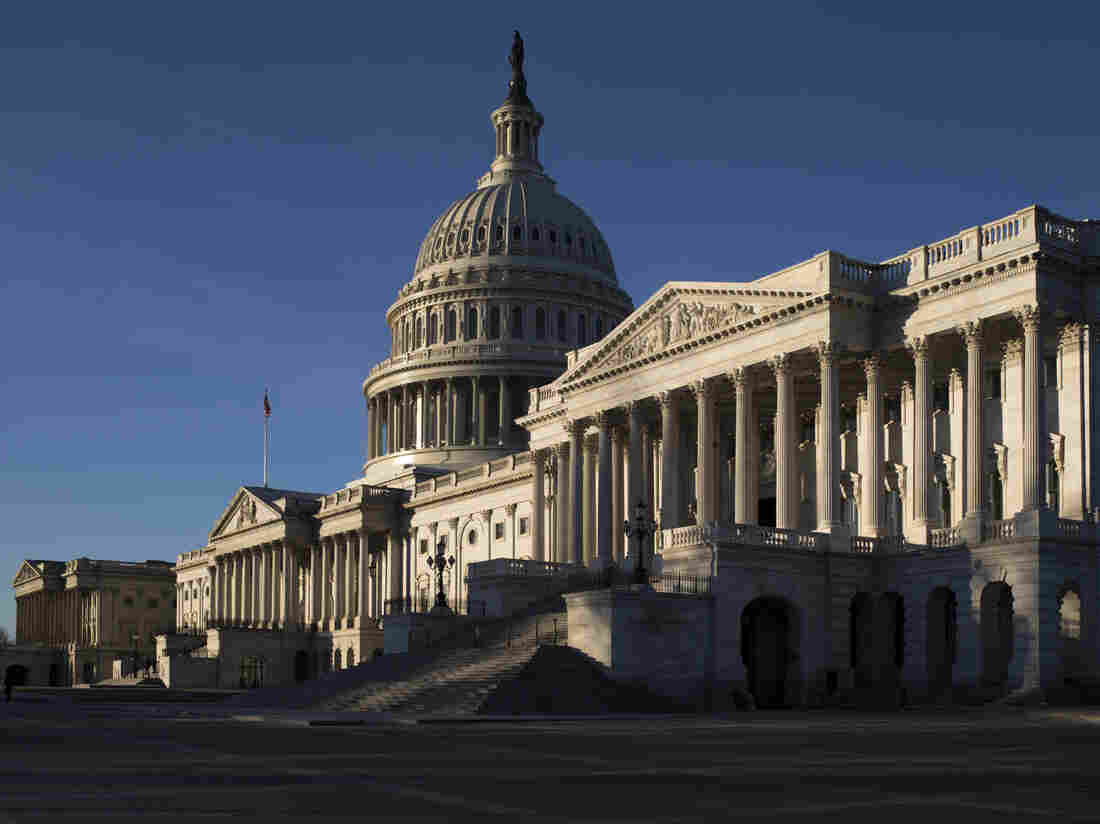 Members of the House and Senate are reconvening in the Capitol on Saturday to try to resolve the impasse. But it's not clear what path there is to a compromise. J. Scott Applewhite/AP hide caption 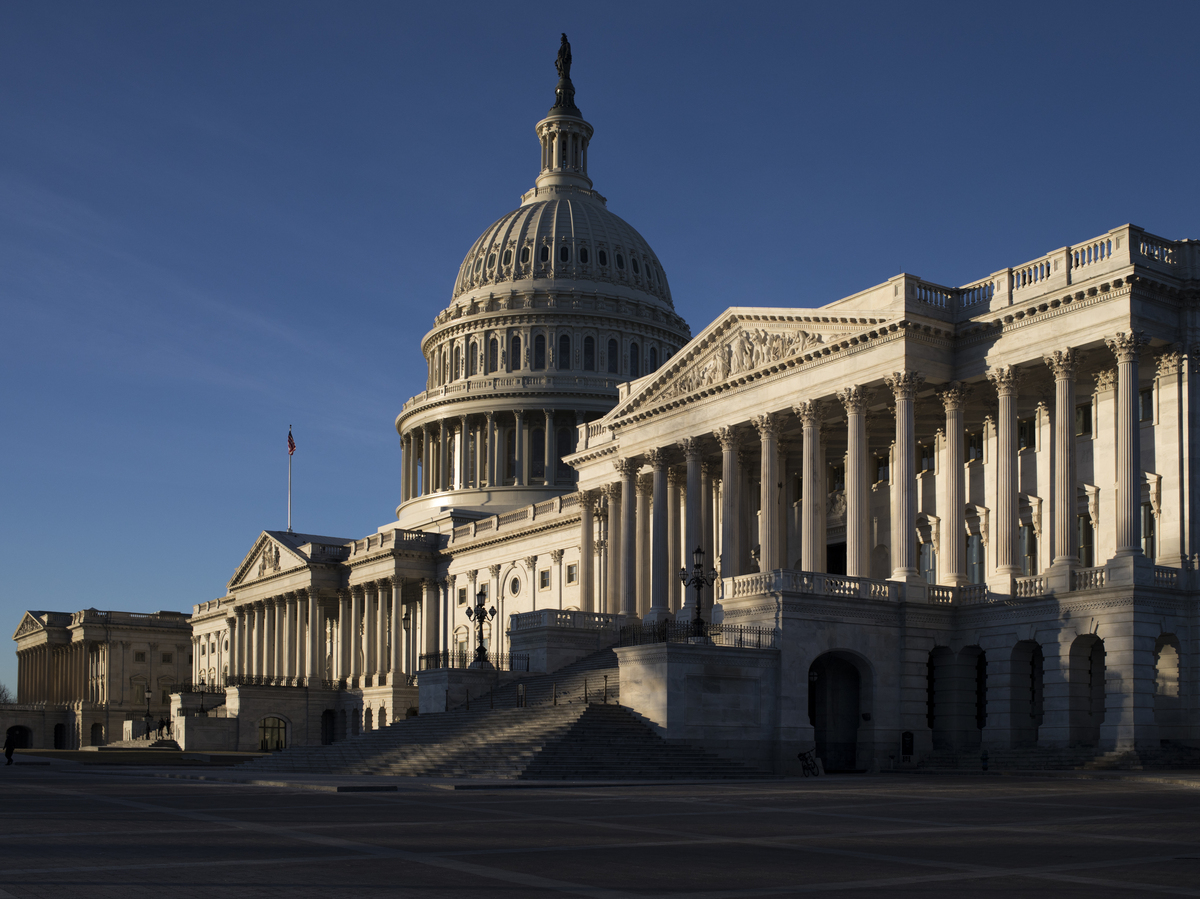 Members of the House and Senate are reconvening in the Capitol on Saturday to try to resolve the impasse. But it's not clear what path there is to a compromise.

"At this hour, the federal government is needlessly shutdown because of Senate Democrats," Ryan said. "One party, in one house of this Congress, is deliberately holding our government hostage. This did not need to happen."

But House Minority Leader Nancy Pelosi, D-Calif., said Democrats want to have deals "in principle" outlined on immigration and on other items in order to get a deal to end the shutdown.

She said that Trump needs to engage and that "it's no use having another CR (continuing resolution or short-term funding package) unless we have the terms of engagement" moving forward.

Pelosi accused Republicans of "using the kids as an excuse" not to pass a domestic agenda.

The House bill included an extension of the popular Children's Health Insurance Program.

Democrats are far more concerned with Illegal Immigrants than they are with our great Military or Safety at our dangerous Southern Border. They could have easily made a deal but decided to play Shutdown politics instead. #WeNeedMoreRepublicansIn18 in order to power through mess!

Sen. Chris Van Hollen, D-Md., who leads the Senate Democrats' campaign strategy, told NPR's Weekend Edition that Trump and Schumer had a productive meeting at the White House on Friday. But after that, Van Hollen said, "the naysayers at the White House then got involved, and things went downhill from there," referring to immigration hard-liners in the administration.

Because most government offices won't open again until Monday, there is time over the weekend for legislators to reach a compromise.

The three-week proposal before the Senate on Saturday has been championed by Sen. Lindsey Graham, R-S.C., since Friday evening. Graham had opposed the longer measure for four weeks of funding, which passed in the House on Thursday but failed in the Senate early Saturday morning, just after the shutdown took effect. Throughout the evening Friday, Graham's proposal for a shorter time frame of stopgap funding seemed to be picking up steam with senators as the chamber failed to pass the House measure or to reach any larger deal on a number of issues that have been under consideration relating to spending levels, immigration and border security.

As the shutdown took effect, Senate leaders were still talking on the floor after a procedural vote late Friday lacked the 60 yes votes needed to advance the House's four-week funding bill.

Around 12:15 a.m. ET, McConnell voted no on the House measure, doing so for procedural reasons that allowed him to preserve the ability to bring up a substitute bill later. The final vote was 50-49, with Sen. John McCain, R-Ariz., absent from the vote.

The apparent congressional paralysis risked overshadowing the first anniversary of Trump's inauguration and capped off a year defined at times by chaos and frustration from both the White House and congressional Republicans despite their unified control of Washington.

And it comes after days of hurried negotiations to find a compromise failed, leading to finger-pointing from both parties eager to shift the blame.

Republicans and McConnell had been angling for a four-week continuing resolution that included extending CHIP for six years in an effort to entice Democrats to vote for the insurance program they want to fund.

But Democrats, led by Schumer, pushed to include an immigration measure that would include a pathway to citizenship for roughly 700,000 immigrants enrolled in the DACA program the Trump administration rescinded last year.

Republicans blamed Democrats for angling for the DACA legislative fix over keeping the government open, using the hashtag #SchumerShutdown and launching an accompanying website focused on Schumer.

"Senate Democrats own the Schumer Shutdown. Tonight, they put politics above our national security, military families, vulnerable children, and our country's ability to serve all Americans. We will not negotiate the status of unlawful immigrants while Democrats hold our lawful citizens hostage over their reckless demands. This is the behavior of obstructionist losers, not legislators," White House press secretary Sarah Huckabee Sanders said.

Just after midnight, McConnell took the Senate floor to fault Democrats for not backing the House bill and averting a shutdown.

"What we have just witnessed on the floor was a cynical decision to shove aside millions of Americans for the sake of irresponsible political gains," the GOP leader said. "A government shutdown was 100 percent avoidable, completely avoidable. Now it is imminent all because Senate Democrats chose to filibuster a noncontroversial funding bill that contains nothing — not a thing — that they do not support."

However, the hashtag #TrumpShutdown was also trending on Twitter late Friday night, and Democrats believe that it's Republicans who will end up shouldering the majority of blame from the public given that the GOP controls both Congress and the White House.

Trump appeared to complicate efforts to reach a compromise over the past weeks, at first signaling he would sign any immigration deal but then rejecting a bipartisan proposal, bending to his conservative, hard-line base and insisting any deal had to have funding for his trademark border wall. Negotiations further stalled after Trump reportedly used a vulgarity in questioning why the U.S. should welcome immigrants from Africa instead of from places like Norway. (Trump has denied that he used that language.)

Schumer took to the Senate floor immediately after McConnell early Saturday and said that when he met with Trump at the White House on Friday, he had put the border wall on the negotiating table in order to reach a compromise on DACA. But "even that was not enough to entice the president to finish the deal," Schumer said, accusing Trump and Republicans of "rooting for a shutdown," which he said would "crash entirely" on the president's shoulders. 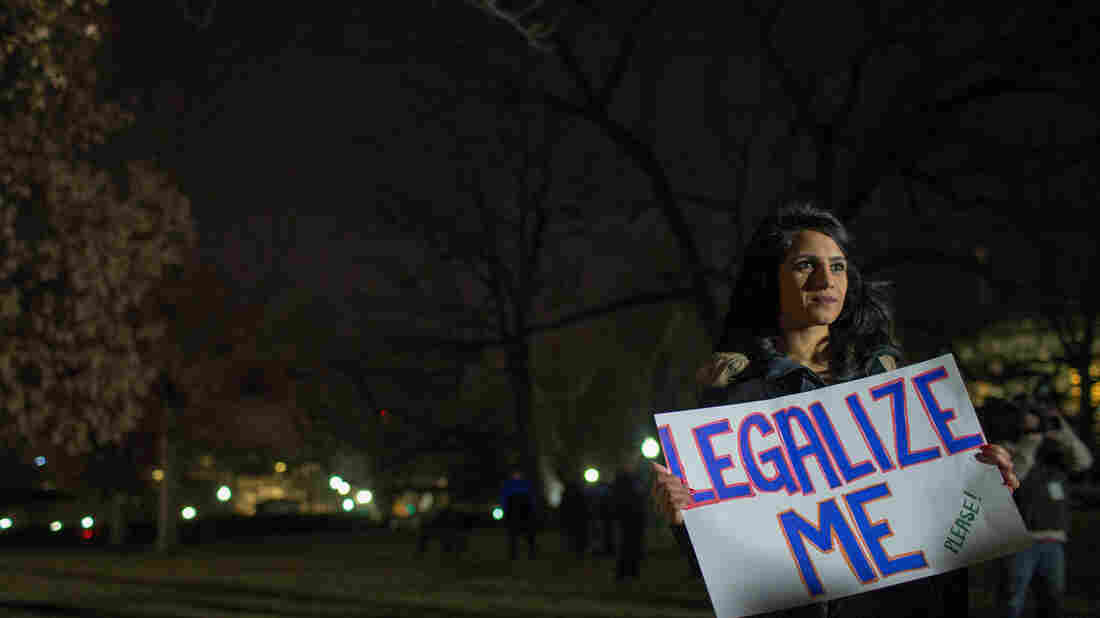 DACA supporters rally at the U.S. Capitol on Friday in Washington, D.C. Democrats, are pushing to include an immigration measure that would include a pathway to citizenship for roughly 700,000 immigrants enrolled in the Deferred Action for Childhood Arrivals. Tasos Katopodis/Getty Images hide caption 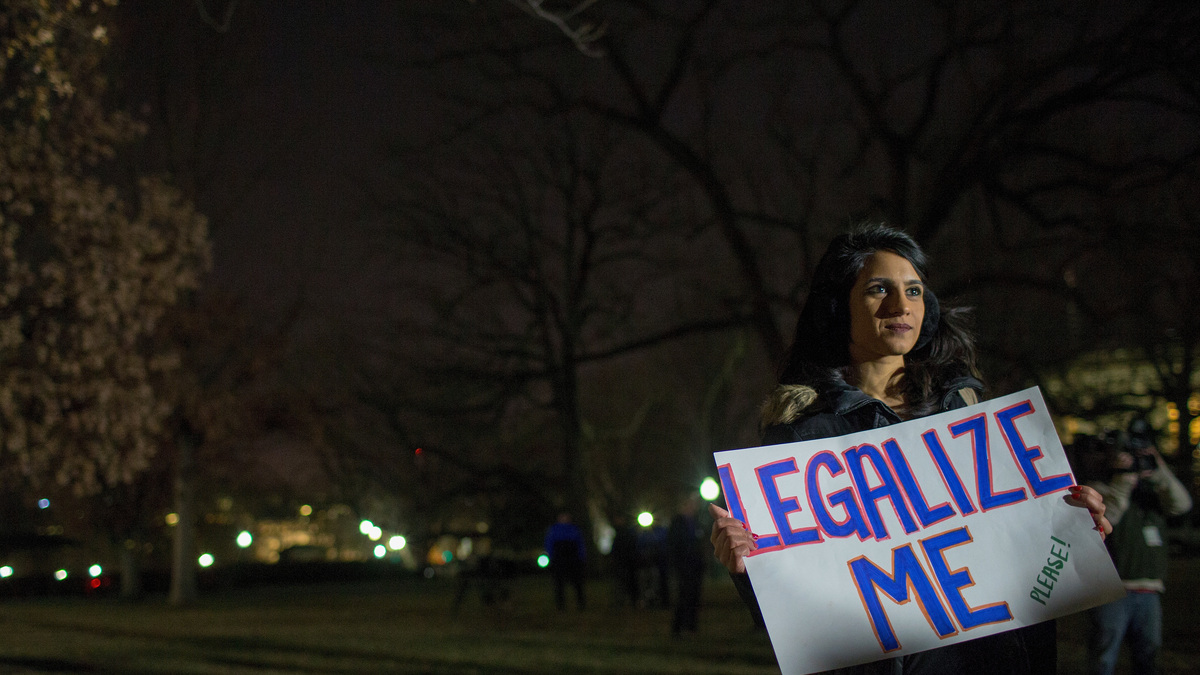 DACA supporters rally at the U.S. Capitol on Friday in Washington, D.C. Democrats, are pushing to include an immigration measure that would include a pathway to citizenship for roughly 700,000 immigrants enrolled in the Deferred Action for Childhood Arrivals.

Polling released Friday from both Washington Post/ABC News and CNN found that most Americans would blame Trump and Republicans over Democrats in the event a shutdown occurred. However, CNN also found a majority said approving a budget deal was more important than finding a way to advance DACA.

As NPR's Brian Naylor reported, if the shutdown continues, essential services will continue and essential workers would remain on the job, though they would be unpaid. Active-duty military will stay in service, along with post offices. In a change from the last time the government shut down in October 2013, the Interior Department announced it will work to keep national parks open and "as accessible as possible."