Accessibility links
Women's March 2018: Protesters Descend On D.C. A Year After Trump Takes Office The second Women's March drew a wide range of ages and races to the nation's capital. The year since President Trump took office has given first-time and veteran marchers new reasons to attend. 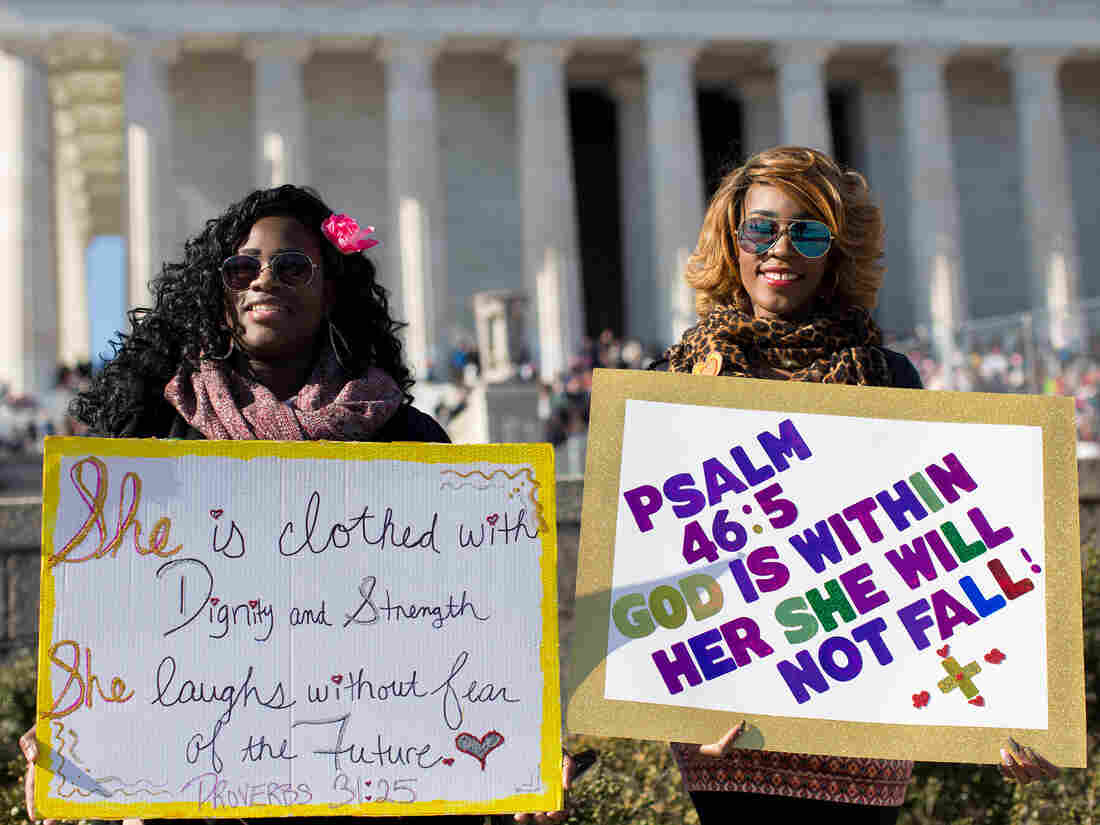 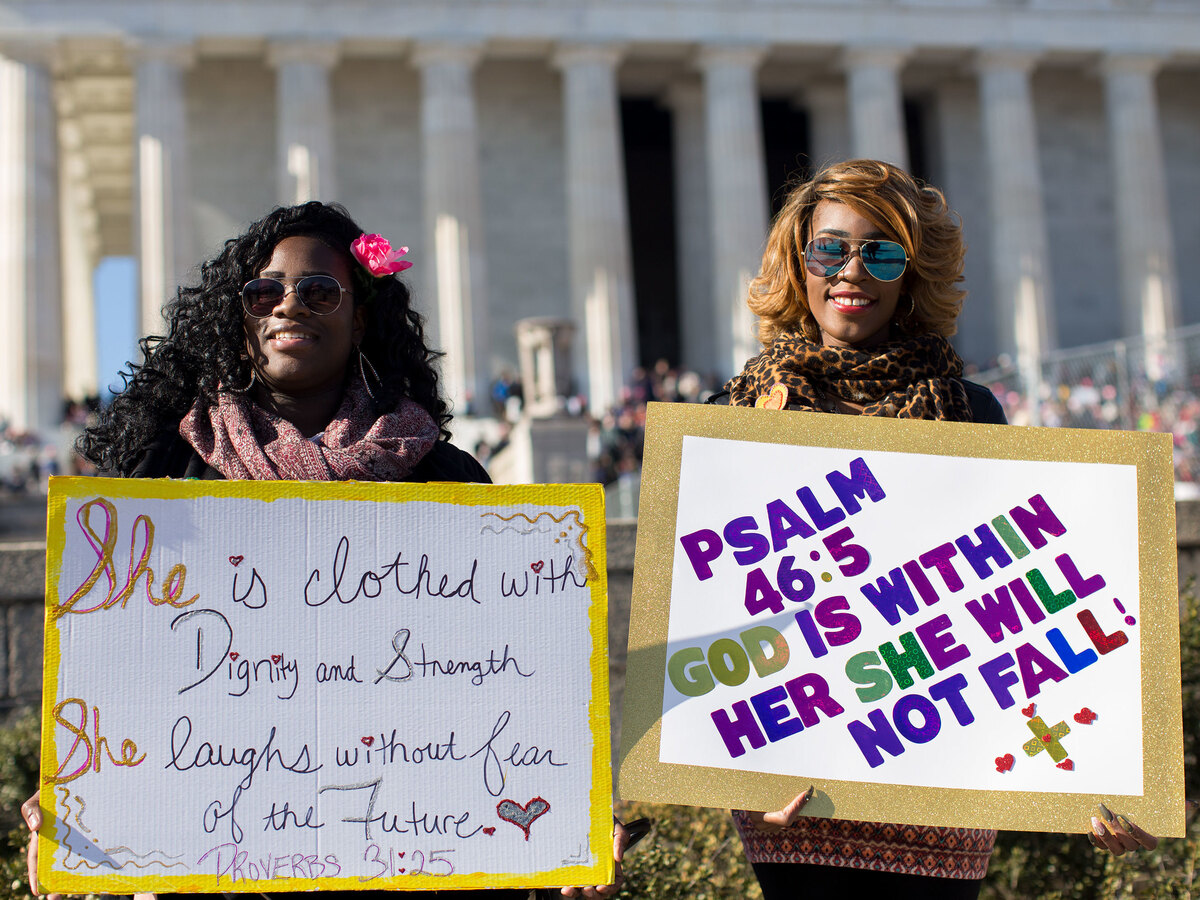 Tiana Ottley (left) and Syerra Graham stand near the Lincoln Memorial. Graham said she wanted to "shine a light on Christianity."

One could call it an ideal day for a protest.

The morning of the second annual Women's March on Washington was warm for a late-January day in the nation's capital. The water was frozen in the reflecting pool at the National Mall, but a coat was optional as temperatures approached 60 degrees.

Amid the government shutdown, the protesters gathered. They came in droves to the steps of the Lincoln Memorial and along the mall, huddling around a stage where speakers presented and shouted rallying cries before the audience, who responded with chants and cheers.

Here are a few of the protesters we met on Saturday.

"I didn't come last year," said Syerra Graham. "I didn't think it was going to be a big deal." But at this march, which coincided with the first anniversary of President Trump's inauguration, Graham said that she wanted to "shine a light on Christianity."

"With the people that are in office now, it makes people not want to be Christian," she said. "They have such a negative light on it. But, all Christians don't hate. All Christians aren't anti-gay and anti-abortion. True Christians want to spread love to everyone."

Graham attended this year's march with her friend, Tiana Ottley, who said the march is more than a rallying cry for women of the present; it's a movement for the future. "It's not just about who's in office and who's getting elected," Ottley said. "It's about what we are doing to change the world. It's about getting people together and improving the education system. It's about making sure our kids are being empowered as well and setting an example for the next generation."

Ottley said that when she was in school, she would hear about protests, like the Million Man March on Washington. "You hear about all of these things that happened and you asked yourself, 'Would I be that? Would I have done that?' It's about identifying how you will be a part of history and impact the future." 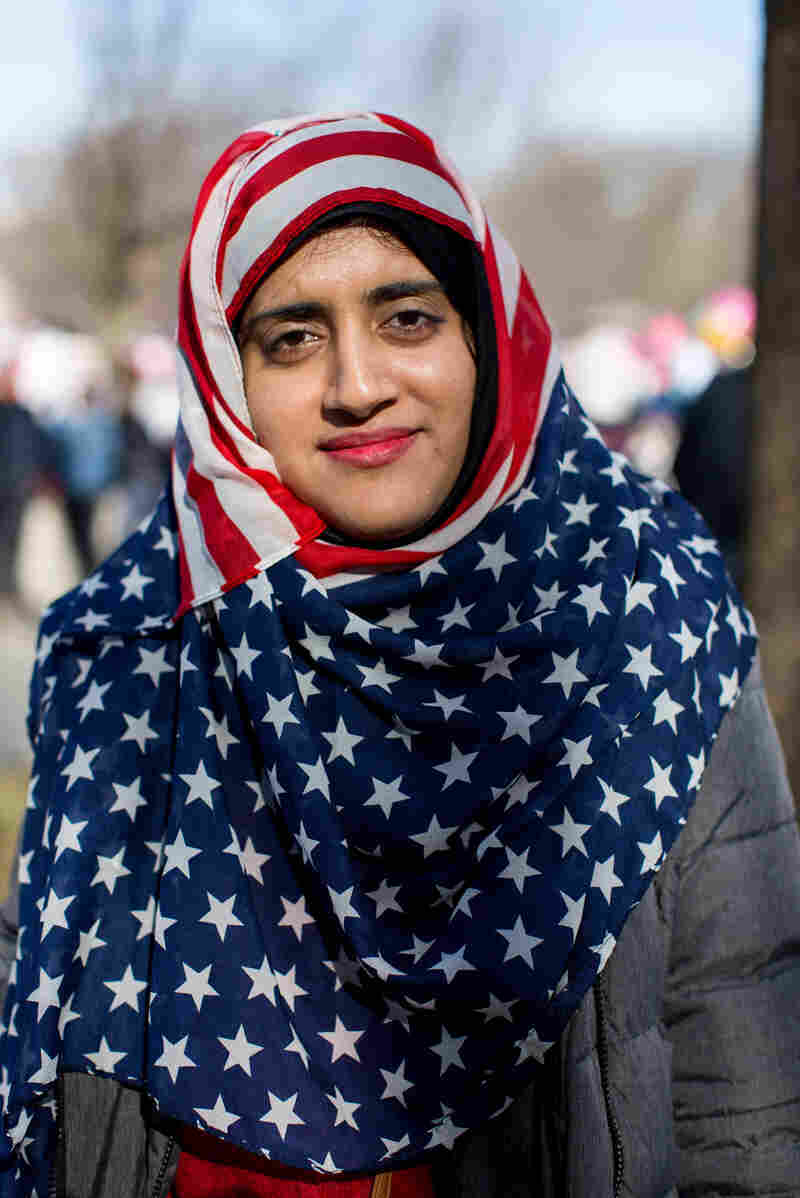 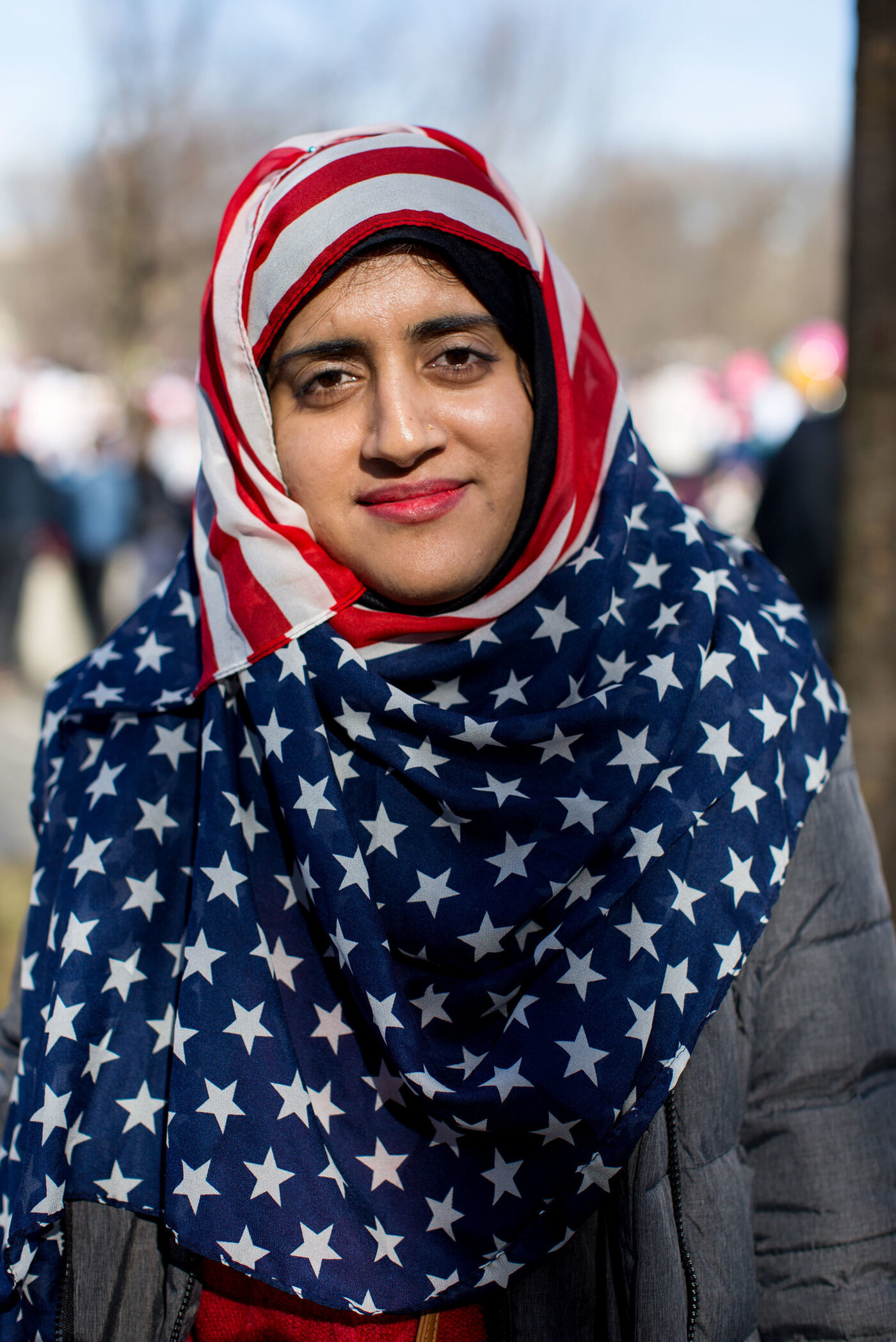 Shabina Shahnawaz, a first-time protester, said marching was only "the first step."

Shabina Shahnawaz of Richmond, Va., stood on a wall, tuning in to a speaker. Shahnawaz, who is Muslim, wore an American flag hijab and held a handmade sign. The first-time protester said she was "happy to be a part of it," and was looking forward to "great change that would include everyone — all the minorities who are held back, who are afraid to come and participate over here."

"Coming up here is the first step," she said. "There are so many other things we need to do.

"There is a great fear of [Muslims] being out here. But I believe in God. I believe he is out there to take care of us. We need to come out and make a change. We are Muslims and we are Americans. We are a part of America, so we need to be out here." 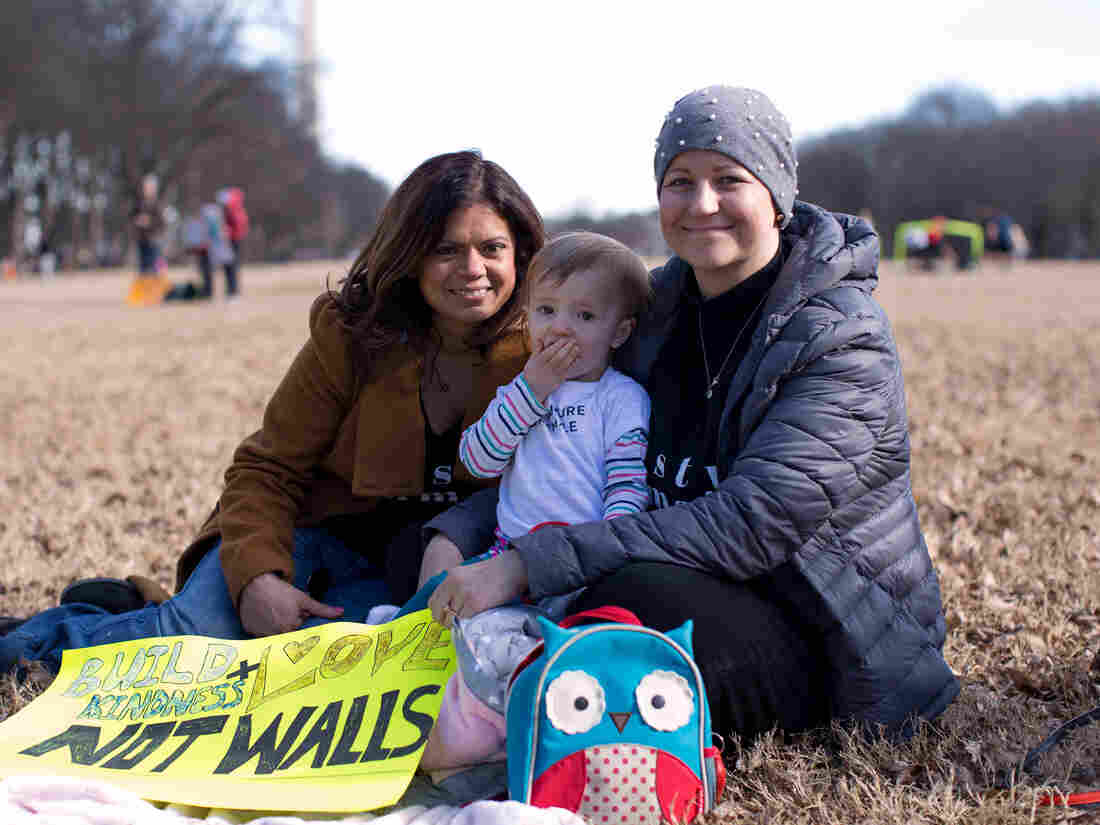 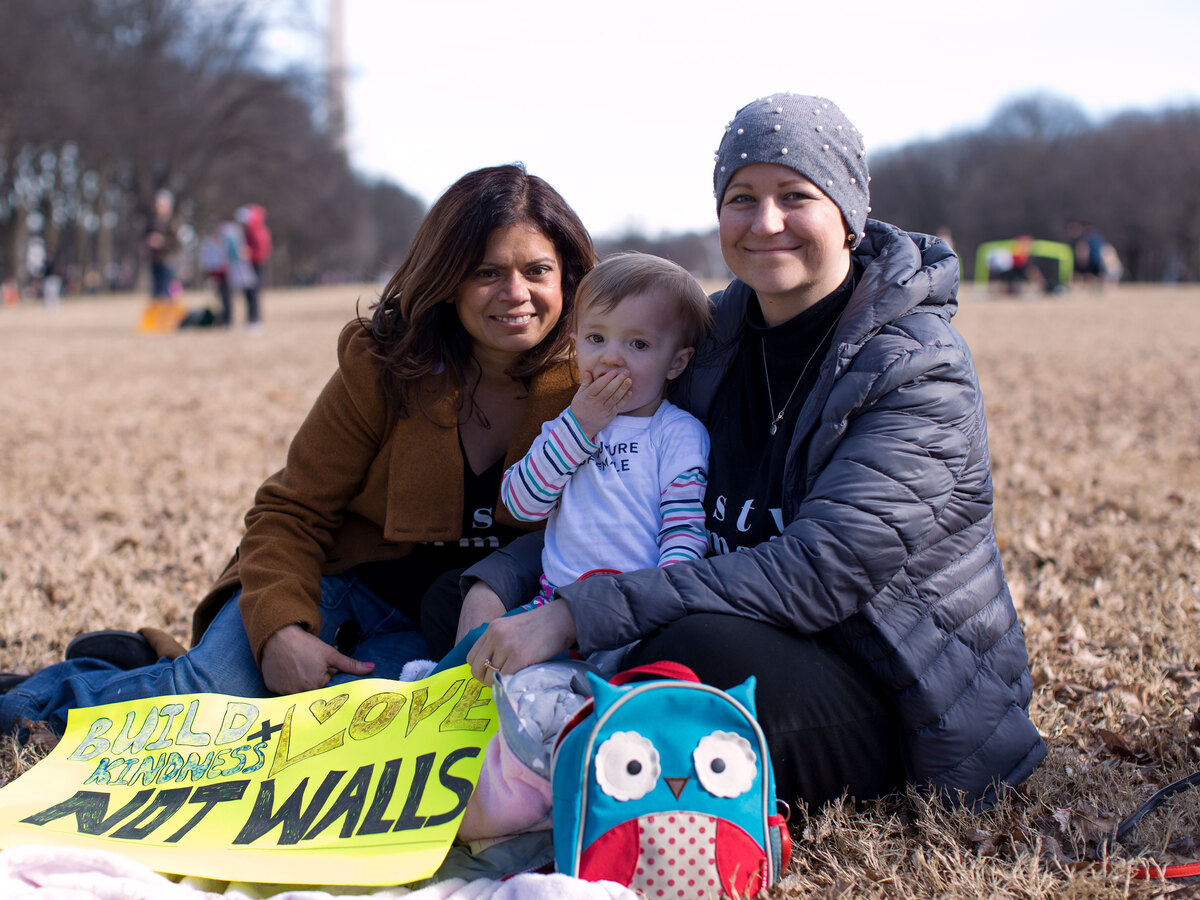 Kendra Harkins sat on a blanket with her daughter, Amelia, in her lap.

"It's snack time," she said, as Amelia ate crackers out of a plastic, spill-proof snack cup. Beena Patel, a friend of Harkins, sat beside the blanket. Both women attended the 2017 Women's March on Washington. "[Amelia] was in the same onesie," Patel said, "but she's a little taller now."

Attending the march is a tradition for their families now, Harkins said. "I'm trying to teach my daughter, even at a very early age, that this is a community that's important and we need to stick together and be strong together," Harkins said.

"When we had the Women's March the day after the inauguration ... it was almost like Obama's 2008 inauguration where there was this rush," Patel said. "There was just this energy from November through to right before the march." 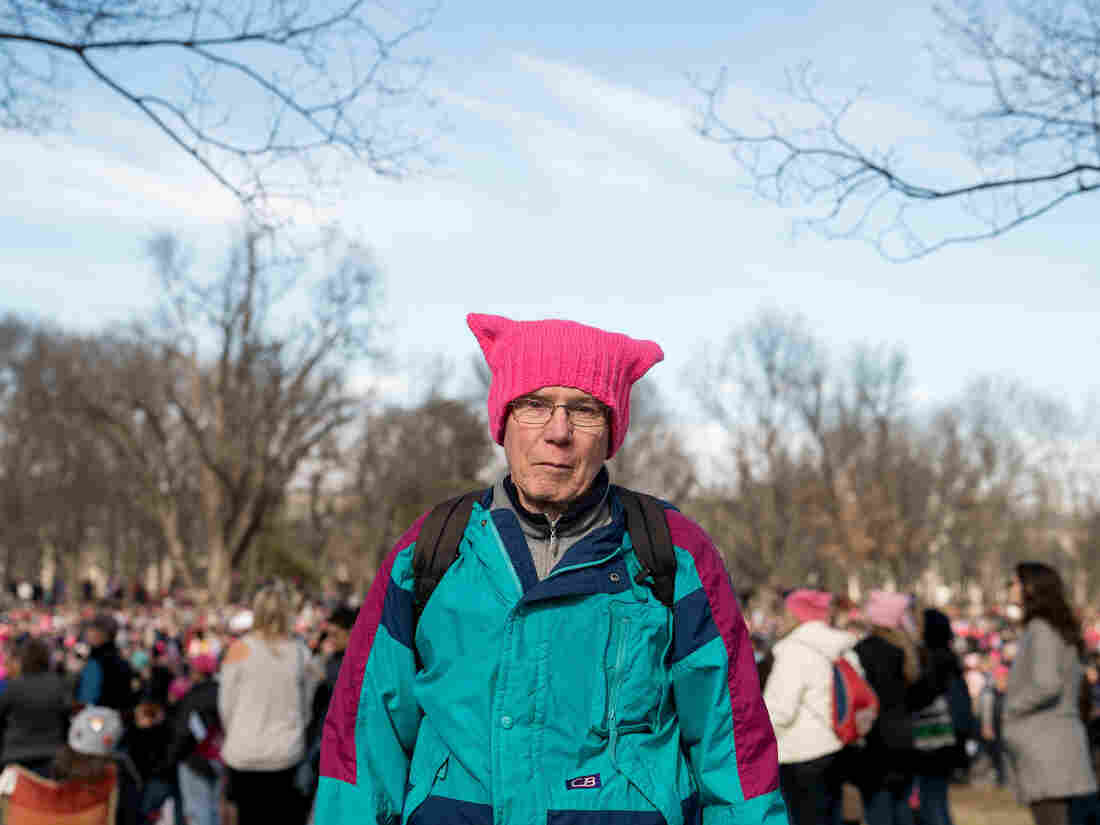 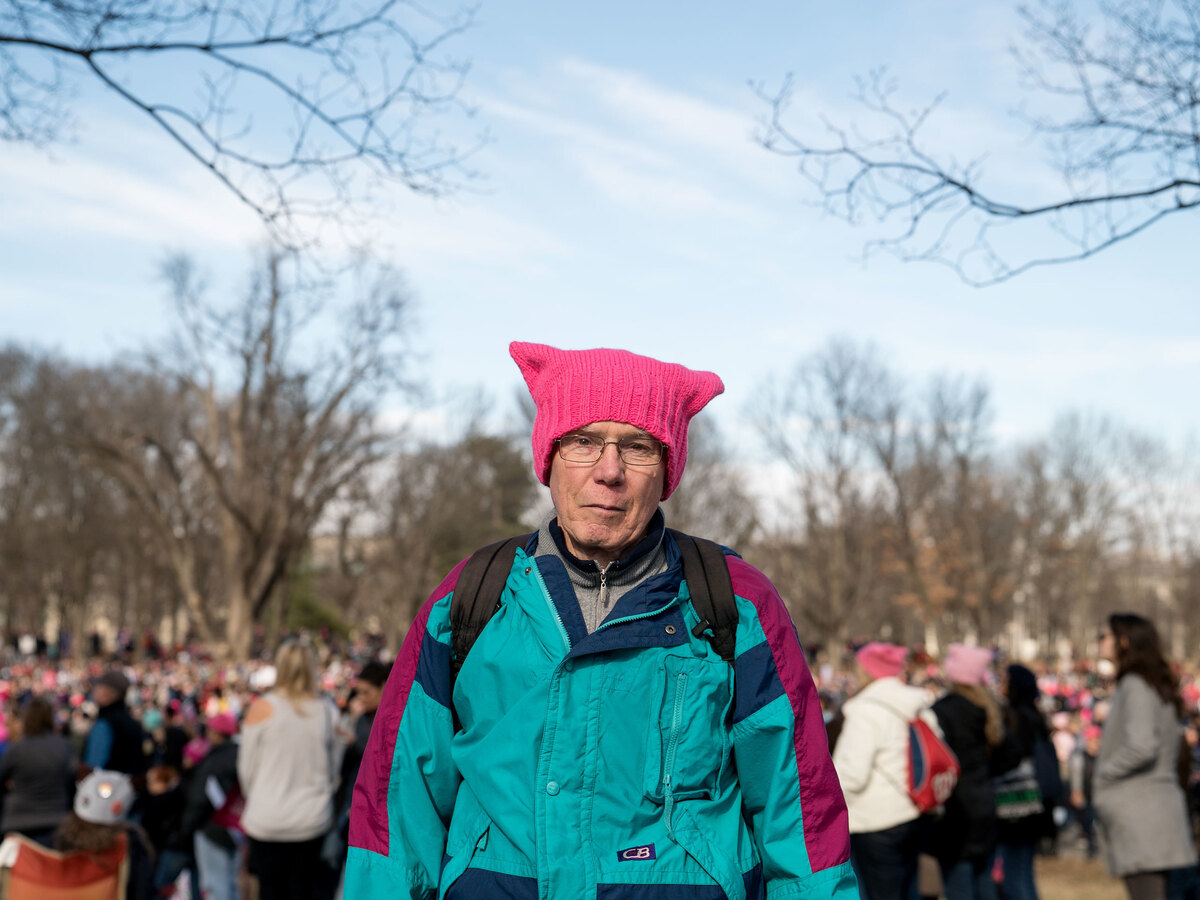 "Why am I here today? We don't have enough time in the world for that," Earle Mitchell said. He chuckled and hesitated as he contemplated the many reasons why he attended the Women's March on Washington. Mitchell attended the march alone, wearing a pink hat.

"I guess what really affected me was — I'm a Navy Veteran, 28 years in the Navy — I served the same time as John McCain," he said. "When Trump made those remarks disparaging John McCain, who was a prisoner of war, that just cut to my soul.

"[McCain's] a good man," he said. "And that just tore me apart. And everything since then — it just keeps getting worse, day after day." 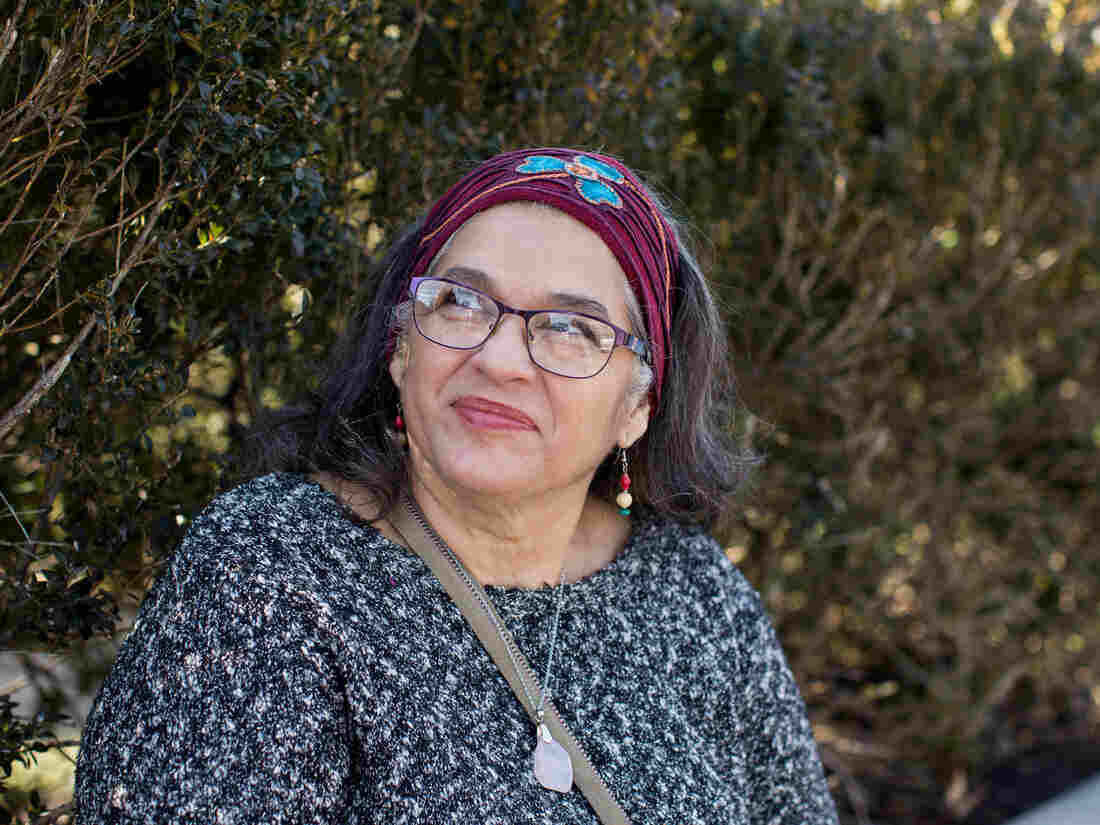 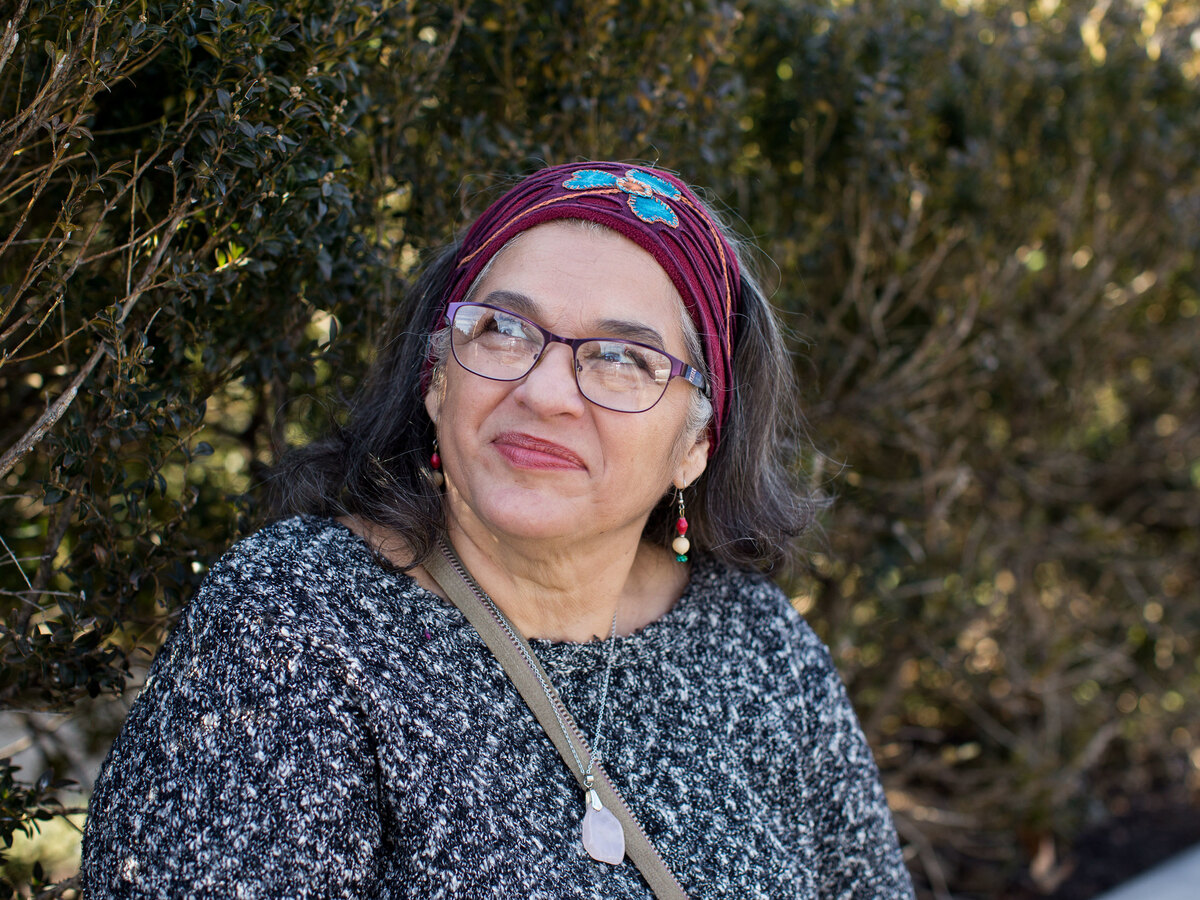 Raquel Gomez called it "the rising of women."

Raquel Gomez sat by herself, observing as other marchers walked along 17th Street toward Pennsylvania Avenue.

"I'm happy to be here and see this many people here today," she said. "And, of course, I am happy to see so many people willing to come out and protest what is happening. It's the rising of women. It's women rising above discrimination and abuse. And now it's in the open for all of us to look at, right in front of us."

Gomez immigrated from Colombia 38 years ago, and said she was uplifted by the variety of people she saw at both this year's march and at last year's march.

"[Last year] was the most beautiful feeling you could imagine," she said, "to be surrounded by so many people, so many women — and actually, today I feel the same way. It was so touching. It was so joyful, the women of all ages, lots of grandmothers, lots of young people, women and men, as well, of all colors, of all economic strata. It filled my heart with hope."

Though Gomez is a U.S. citizen now, she said she knows many people who are recipients of the Deferred Action for Childhood Arrivals program and are impacted by the current administration's decision to repeal it.

"The pressure on Congress for DACA ... that's a priority for me," she said. "As a Latina in the United States, these young people have been here from more than 20 years. They came here with their parents ... these people have actually been able to adjust. These young people don't know any other country. They speak English like Americans do. They are pursuing college degrees. Why should they be expelled from the country?" 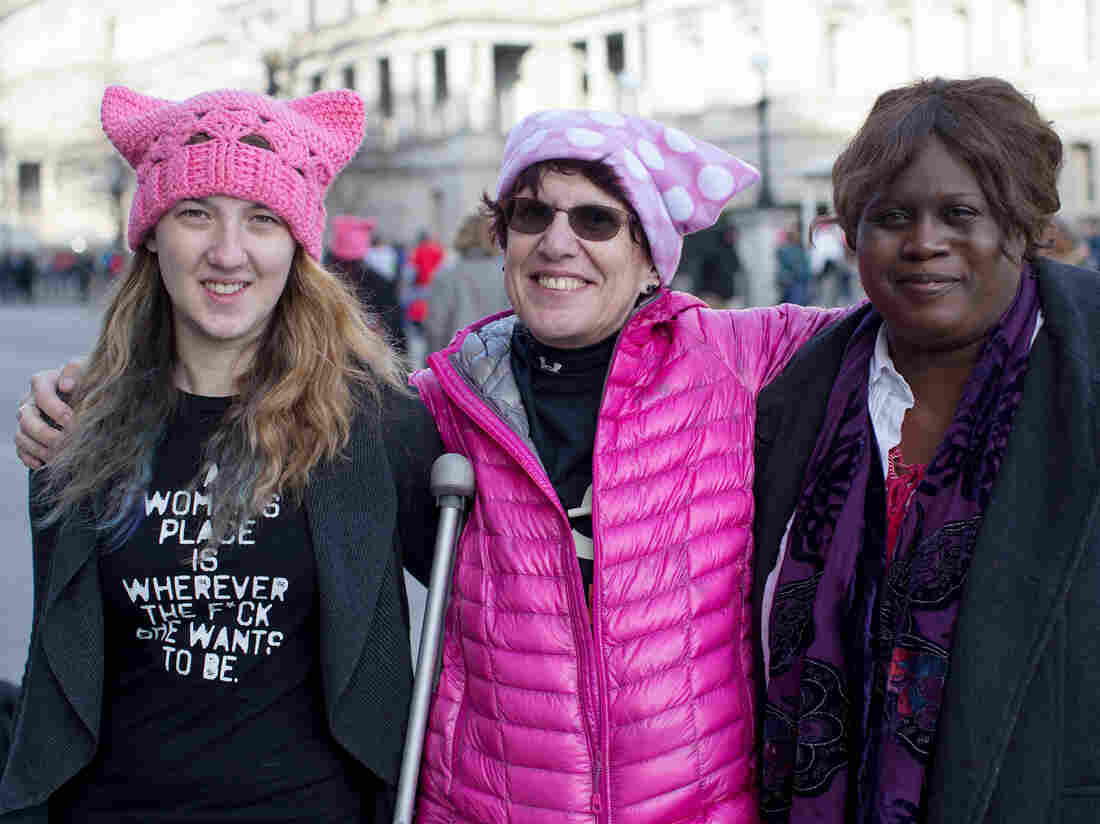 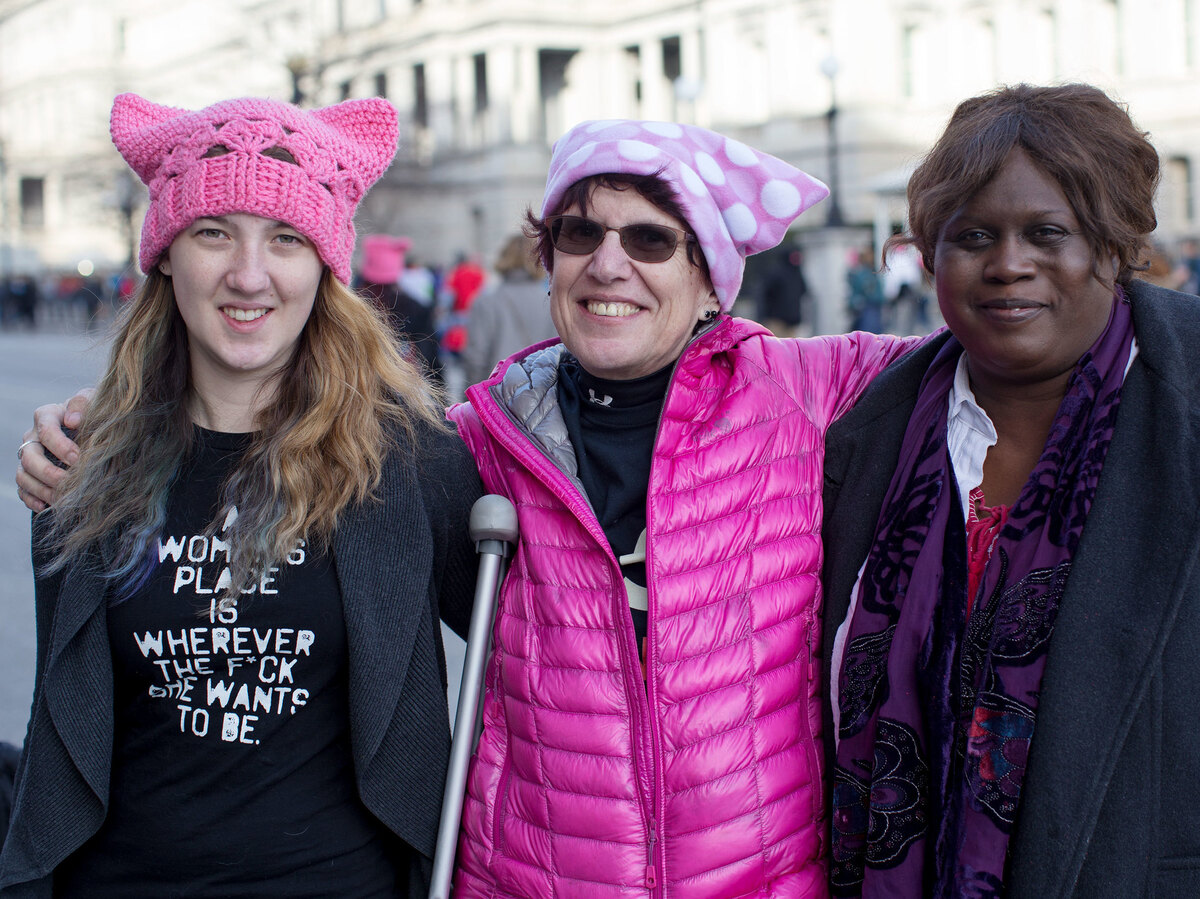 Sherry O'Keefe sat in a wheelchair, her protest signs in her lap. "I actually came from Iowa today with a broken hip," O'Keefe said. "I broke my hip two weeks ago yesterday. Ten days ago, I had surgery."

O'Keefe attended last year's march, and said she felt she "needed to be here," again this year. She drove herself from Iowa to attend the march, she said. "Last year's march was so impressive that it ranks up there with my marriage and the birth of my two children," she said. "D.C. is kind of the heart of the Women's March."

O'Keefe's daughter, Lindsay, wheeled her along Pennsylvania Avenue, and her friend Vivian Weeks stood close by, carrying a second sign. O'Keefe and Weeks reunited this year after meeting for the first time at last year's march.

"So my daughter went on the women's website and decided to navigate and see who was offering space. This kind lady made a connection and said 'Hey, come stay with us. No money, no nothing, just come stay with us. We are in solidarity.' And it's been a blossoming friendship — a sisterhood — ever since."