Accessibility links
Who Will Carry The Blame For The Shutdown? Maybe No One If voters punished Republicans over the last shutdown, it was by giving them the Senate majority. Since then, a blinding news cycle had made each crisis only more forgettable than the last. 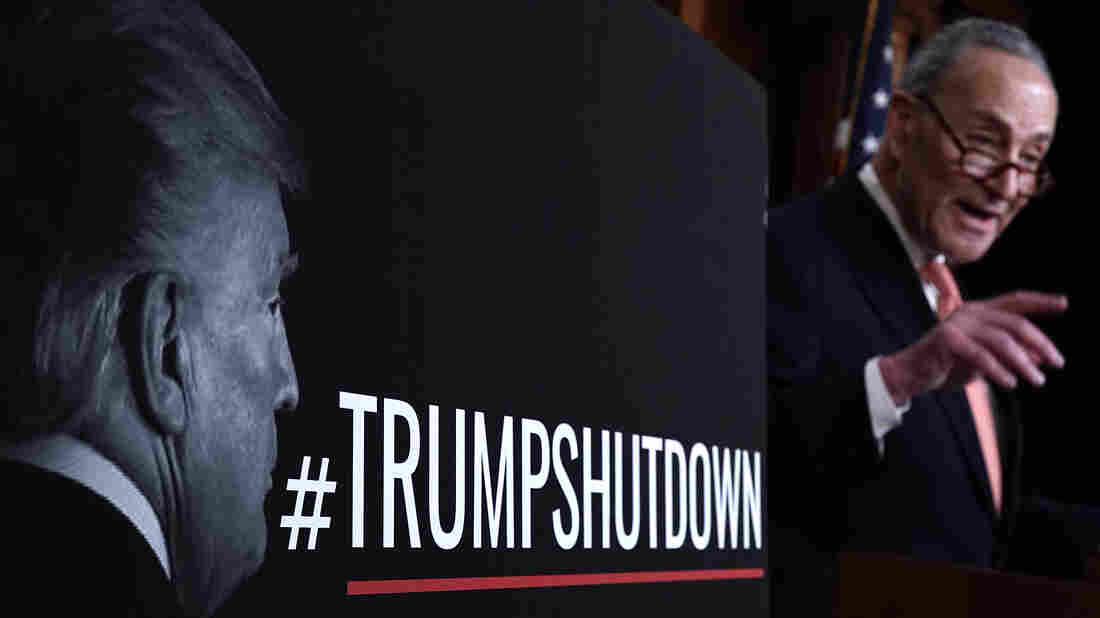 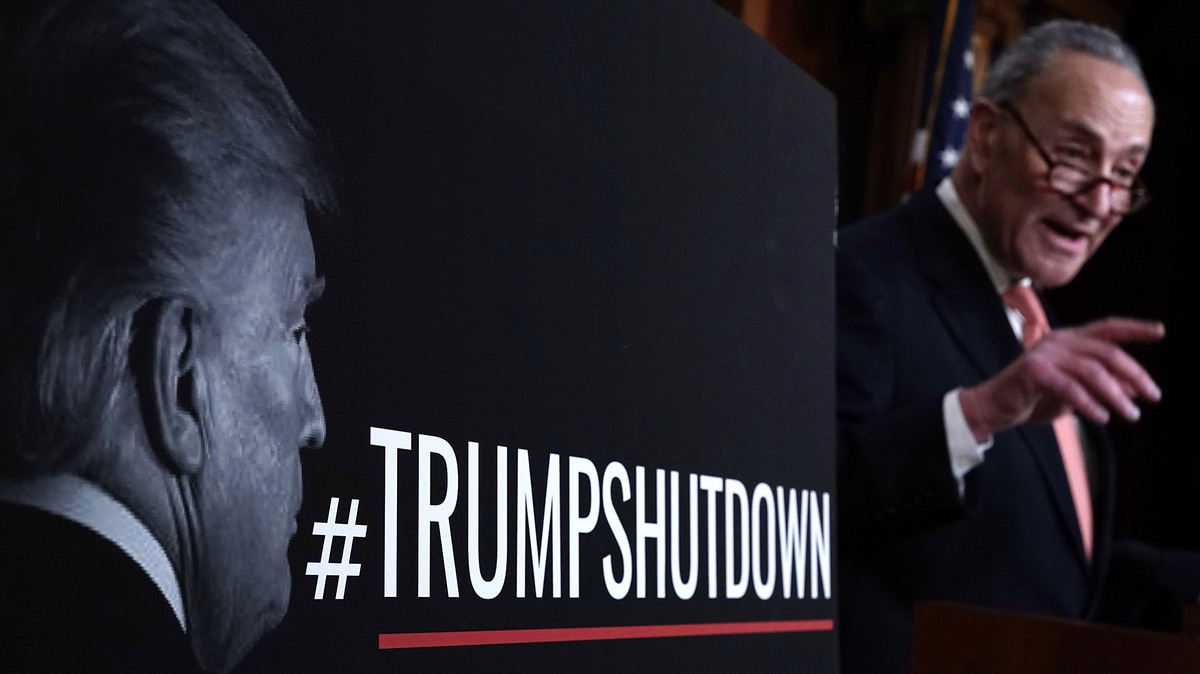 While a lot of furious negotiation has been going on behind the scenes on Capitol Hill to end a partial government shutdown, to voters and cable news viewers it may look like most of the work in Washington is going into pointing fingers.

But even if voters side with one party or the other, neither side may fear any lasting political damage. Republicans' approval ratings tanked after they were blamed for engineering the last government shutdown in 2013. A little more than a year later, voters delivered the GOP a Senate majority. And in the Trump era, the news cycle has only accelerated, giving crises a shorter and shorter half-life.

Still, President Trump was tweeting before dawn on Saturday.

"Democrats are far more concerned with Illegal Immigrants than they are with our great Military or Safety at our dangerous Southern Border," the president offered in his first volley.

Democrats are far more concerned with Illegal Immigrants than they are with our great Military or Safety at our dangerous Southern Border. They could have easily made a deal but decided to play Shutdown politics instead. #WeNeedMoreRepublicansIn18 in order to power through mess!

Democrats are seizing on a rare moment of leverage, with a spending bill that needs their votes, to try to make permanent the Deferred Action for Childhood Arrivals. The Obama-era policy shields about 700,000 immigrants from deportation, those in the country illegally who were brought to the U.S. as children. But Republicans point out that DACA won't really expire until March.

"The federal government is needlessly shut down because of Senate Democrats. One party, in one house of this Congress, is deliberately holding our government hostage," House Speaker Paul Ryan, R-Wis., said during a floor speech on Saturday.

The GOP included a six-year extension of the Children's Health Insurance Program in their government funding bill, making it harder for Democrats to oppose. But Democrats tanked the bill anyway, and Republicans accused them of pulling a stunt that put needy children at risk.

Democrats had an answer for that.

"Negotiating with President Trump is like negotiating with Jell-O," Senate Minority Leader Chuck Schumer, D-N.Y., said in floor remarks a day after a meeting with Trump that both sides said was favorable. Whatever progress they made at the White House on Friday obviously didn't lead to a deal.

Meanwhile, the Democrats are not going to let anyone forget when Trump tweeted last year, "Our country needs a good 'shutdown.' "

It's too early to tell who the public will decide is at fault, or if they'll even assign blame.

There were polls before the shutdown started warning Republicans that they would shoulder the blame. And while the public broadly supports making DACA permanent, as Democrats are insisting on in current talks, pollsters also found that the public thought avoiding a shutdown was more important.

There is shared outrage about how broken the whole system is, so it's possible that means neither side will feel much of a consequence from this debacle.

There are other reasons, too.

First is the little room that exists for these public servants' public image to drop. Last week's NPR-PBS NewsHour-Marist poll showed that just 36 percent of Americans have trust in the Democratic Party and 29 percent in the Republican Party. The only institution with a lower level of trust is the Congress itself.

Also, many of the current players, save the president himself, were in Washington for the last shutdown in 2013. It was viewed as driven by conservative Republicans, chiefly Sen. Ted Cruz of Texas. And you know what happened after that? In addition to Republicans winning control of the Senate and expanding their House majority, Cruz became a grassroots hero. He built a large army of supporters and donors who helped him launch a presidential campaign in 2016 that outlasted almost every other GOP candidate who took on Donald Trump.

OK, lesson learned. Shut it down?

In this era of tribal politics, the focus is often on firing up the party faithful, far more than trying to win over voters in the middle.

Democrats have been taking heat from their base, and particularly from immigration activists, for not pushing the DACA issue to the brink in December when government funding was last extended. In the final hours before this shutdown, Democratic lawmakers — including some thinking about a presidential run against Trump in 2020 — held a rally with so-called dreamers on Capitol Hill and then went inside to vote against funding the government.

Among Republicans, the president's hard line on immigration appears to be spreading. Senate Majority Leader Mitch McConnell, often criticized as more concerned than anything with protecting that Senate majority, has ratcheted up his tone recently, as more in the party say Democrats are prioritizing people in the country illegally over American citizens.

While the Republican base certainly doesn't want the president to give in and make a DACA deal with Democrats, there are signs that the Trump Administration may be worried about taking heat for a lasting shutdown.

Before it took hold, Office of Management and Budget Director Mick Mulvaney said, "We're going to manage the shutdown differently."

He briefed reporters Saturday on how operations such as the Environmental Protection Agency, mine safety, cyber security, trade negotiations and the government response to the flu outbreak were moving ahead with minimal disruption.

The National Parks Service is also doing everything it can to avoid the images from the last shutdown of veterans locked out of the World War II memorial, or spoiled family vacations in Yosemite.

It may work, but that would only make this a more forgettable shutdown than we've seen in the past.

A month's worth of news feels like a full year. So by that measure, we've got about a decade to get through before the midterm elections — before any real political consequences could be felt from the shutdown.