Accessibility links
Government Shutdown: What Is Closed And What Is Open? The partial federal shutdown that went into effect at midnight on Friday has a broad impact, from closing Independence Hall to furloughs at the Department of Education. 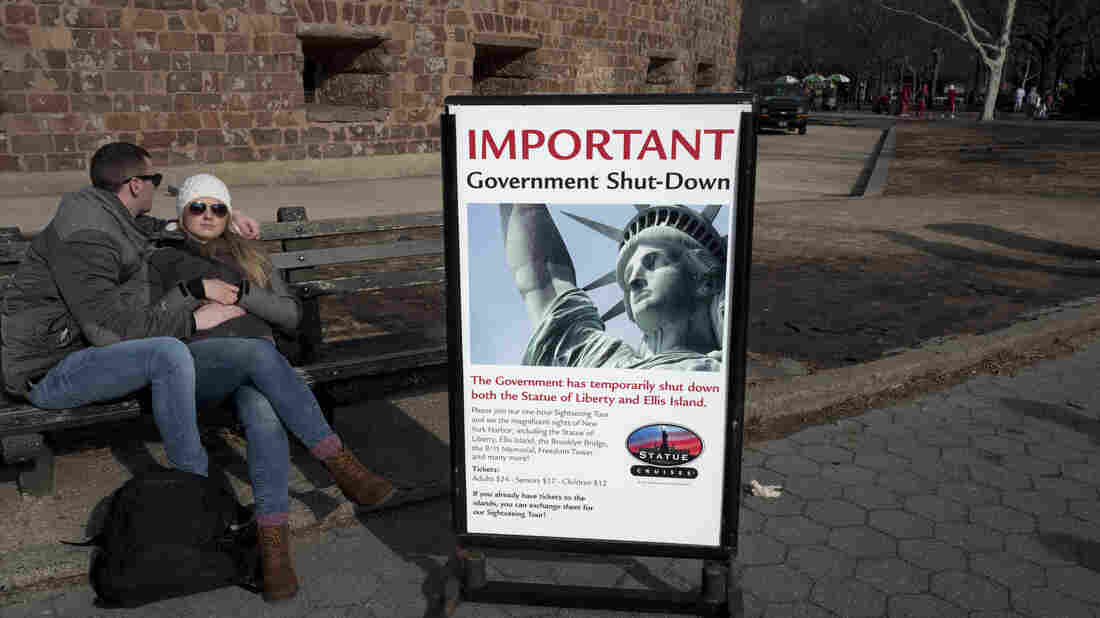 Tourists rest on a bench on Sunday in lower Manhattan after discovering that the Statue of Liberty is closed due to the government shutdown. It's reopening today using state funding. Mark Lennihan/AP hide caption 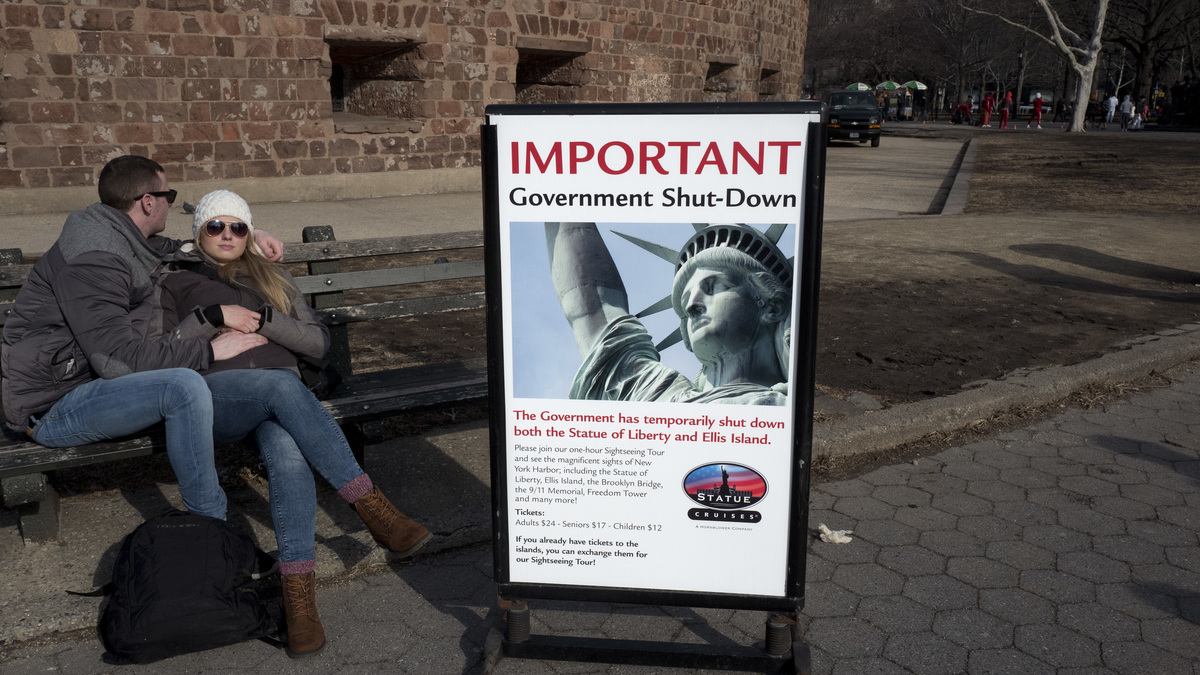 Tourists rest on a bench on Sunday in lower Manhattan after discovering that the Statue of Liberty is closed due to the government shutdown. It's reopening today using state funding.

Hundreds of thousands of federal employees will either be sent home or have been told to not show up to work at all on Monday, as furloughs due to the government shutdown that began Friday night start to affect workers around the country.

"The shutdown is going to get a lot worse tomorrow," he warned. "A lot worse."

Republicans are insisting the shutdown is less "weaponized" than the last time this happened, in 2013 under then-President Barack Obama, but it's still sure to have a broad effect across the country and get worse the longer it goes.

"Essential services" will continue, and essential workers will remain on the job, albeit without pay.

But there will be a lot of federal workers — thousands — who will see a change.

Every federal agency has a specific contingency plan, in the case of a loss of funding, and you can look through them all here. In 2013, about 800,000 of the 2.1 million civilian federal employees were furloughed in 2013, according to The Washington Post.

Shutdown Question: Who's Out Of Touch With The American People?

In the Department of Agriculture's Farm Service Agency, for example, which employed 10,944 people as of last September, just 62 people are considered completely exempt from furlough.

The agency's plan then lays out a schedule for an additional tapering of labor: All employees are called to work for the first half of the first day of a shutdown, and then over the next 20 days, the plan dwindles the workforce down to 120 by the second half of the first day, and all the way down to seven people by day 20.

Here's how the shutdown will affect some key aspects of the government:

Guidance from the Defense Department issued on Friday said military personnel will continue working, and military operations in places like Afghanistan would continue.

"There would be no gap in their pay unless the shutdown lasted past Feb. 1, and otherwise they would continue on the job without getting paid until the shutdown ended or until Congress and the president agreed to cover their costs before it ended," according to The Washington Post fact checker, who debunked President Trump's numerous claims that the military would be hit the hardest in the event of a government shutdown.

Of the VA's 377,000 employees, more than 335,000 are expected to continue working. After a scare about veterans not getting the care they needed during the last shutdown, the Veterans Health Administration has been getting its funding appropriated in advance.

Postal delivery will be unaffected by the shutdown as the Postal Service operates on its own revenue stream. Post offices will also remain open.

The Justice Department says criminal litigation will go on without interruption. The office of special counsel Robert Mueller, who is investigating Russian interference in the 2016 election and potential ties to the Trump campaign, will also be unimpeded.

In the Department of Education, the contingency plan calls for more than 90 percent of its total 3,912 person staff to be furloughed during the first week of a shutdown, and a total of "not more than 6 percent of the total staff to be called back to work during a longer interruption."

The Department of Housing and Urban Development employs about 7,800 people. About 300 of them are considered exempt from furloughs, according to its contingency plan. It will continue to provide essential services like housing the homeless and providing emergency services to people with AIDS. 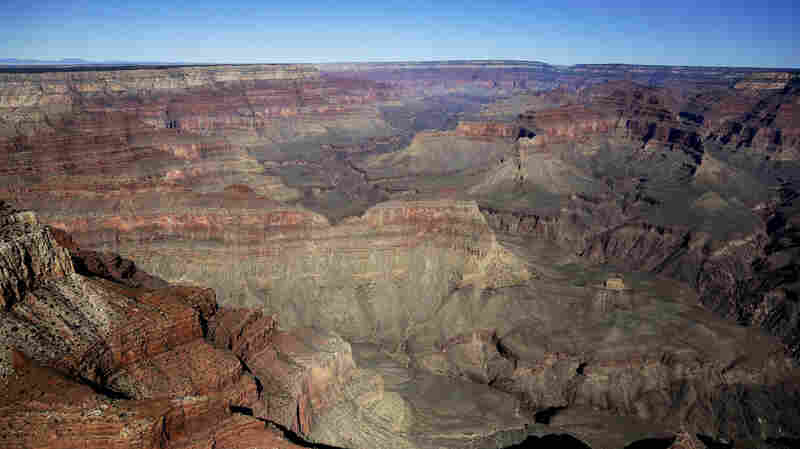 The Grand Canyon National Park is pictured here closed and empty in 2013, during the last government shutdown. Arizona officials guaranteed on Friday however, that the park will remain in full operation if the current shutdown remains in place. Julie Jacobson/AP hide caption 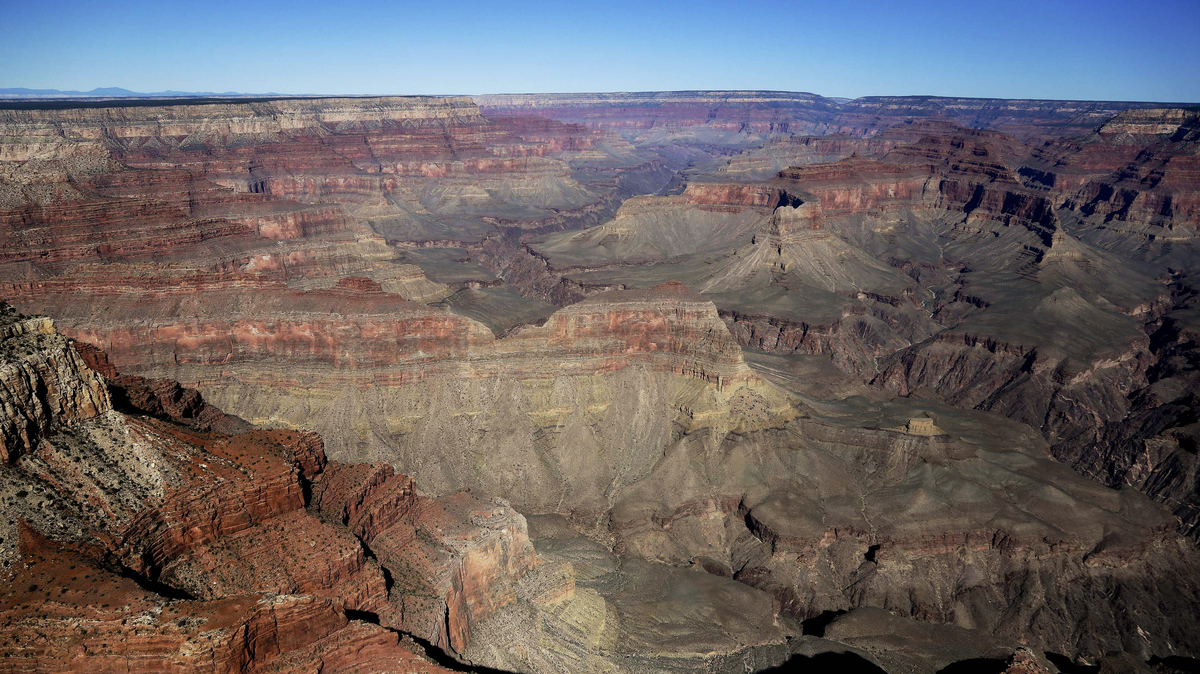 The Grand Canyon National Park is pictured here closed and empty in 2013, during the last government shutdown. Arizona officials guaranteed on Friday however, that the park will remain in full operation if the current shutdown remains in place.

One of the most visible symbols of that 2013 shutdown was gated off national parks. That won't be happening this year.

Most national parks, recreation areas, and monuments are staying open during the shutdown, but as NPR's Nathan Rott reported over the weekend, many rangers and staffers won't be on duty.

"There's absolutely a frustration [among park rangers]," Rott said on NPR's Weekend All Things Considered. "By keeping the parks open, the Department of Interior is basically saying that we can do this whole national park thing without you guys. And in reality, they don't think that's going to work."

Most landmarks, such as Independence Hall, which houses the Liberty Bell in Philadelphia, will be closed.

But one of America's most famous monuments, the Statue of Liberty, will reopen Monday after the state of New York agreed to temporarily pick up the tab for operating the park.

New York State will reopen the Statue of Liberty and Ellis Island tomorrow. We will not stand by as this symbol of freedom and opportunity goes dark.pic.twitter.com/8g6dnsZmU7

Arizona Gov. Doug Ducey has vowed to keep the Grand Canyon open as well. "The Grand Canyon will not close on our watch. Period," said Ducey said in a statement. "If Washington, D.C. won't function, Arizona will."

The environmental Protection Agency has enough funding on hand to remain open through the coming week, according to a memo from administrator Scott Pruitt. All EPA employees are expected to come to work on Monday.

The Department of Homeland Security says nearly 90 percent of its personnel are considered essential staff and will continue to perform their duties.