Accessibility links
'The Friend' Is No Shaggy Dog Story Sigrid Nunez's new novel follows a woman mourning the suicide of a close friend, mentor and fellow writer — and the upheaval after she reluctantly takes in his huge, bereft (and smelly) Great Dane. 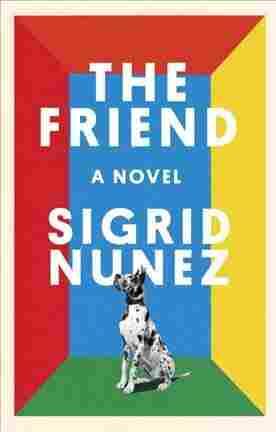 One of the great joys of reading is discovering a new writer whose work speaks to you — whether an unknown debut novelist or a seasoned author whose many books you've somehow missed. Case in point: Sigrid Nunez. I was drawn to her sixth novel as a fresh addition to the literature of grief, but within pages realized The Friend has as much to say about literature as about grief, and was wondering how she'd slipped below my radar.

Nunez's book is about a woman mourning the suicide of a close friend, mentor, and fellow writer. After she reluctantly agrees to take in his traumatized, bereft dog, a massive, arthritic Great Dane, he stinks up her tiny Manhattan apartment and threatens her rent-stabilized lease — but also provides unexpected solace. Nunez deftly turns this potentially mawkish story into a penetrating, moving meditation on loss, comfort, memory, what it means to be a writer today, and various forms of love and friendship — including between people and their pets. All in a taut 200 pages.

The Friend sparked a mini-Nunez festival for me, which offered ample evidence that it's no fluke. In fact, this nuanced, exceptionally literary novel about devotion is a natural outgrowth of Sempre Susan, Nunez's blisteringly frank 2011 memoir of Susan Sontag, which was part tribute, part hatchet job on the mentor with whom she lived for a time in the 1970s when she was an aspiring writer dating Sontag's son, David Rieff.

As Joan Didion has declared, "Writers are always selling somebody out." Nunez grapples with the complicated tradeoffs of hard-hitting work. Her grieving, unnamed narrator thinks her dead friend would hate this book, addressed to him in absentia, and consider it an unforgiveable betrayal.

Nunez deftly turns this potentially mawkish story into a penetrating, moving meditation on loss, comfort, memory, what it means to be a writer today, and various forms of love and friendship.

She is well aware that he would particularly object to her revelations about his habit of hitting on his young writing students — yet she refuses to skirt the issue. Revisiting their arguments about his chronic womanizing, she writes, "A great teacher was a seducer, you said ... The classroom was the most erotic place in the world." But she notes that by cutting his life short to novella length, her "restless, priapic" friend saved himself from the fate of J.M. Coetzee's Professor Lurie, whose lust was his undoing in Disgrace, one of their favorite novels. (He also, of course, dodged the #MeToo movement.)

Like Sontag, Nunez writes, this man was, "to an almost pathological degree, incapable of being alone" — a major handicap for a writer. She revisits other issues raised in Sempre Susan, including whether writing is a vocation requiring sacrifice, as Sontag insisted, or a career path to fame and fortune, as her writing students would have it. Her novel seethes with scathing portraits of the writing workshops with which so many novelists support their work: "I don't want to read what other people write, I want to read what I write," one student complains.

Nunez has a wry, withering wit. Upon overhearing someone at her friend's memorial say, "Now he's officially a dead white male," her narrator responds, "If reading really does increase empathy, as we are constantly being told it does, it appears that writing takes some away."

In 'Fetch,' A Memorial To A Beloved Dog Raises Hard Questions

But can writing offer real catharsis? Will memorializing her friend dilute her memories, turning him into a hologram? Like many suicides, he left no note, and she can't help wondering whether he killed himself because of his despair over literature's woefully diminished societal import, "no matter how brilliantly written or full of ideas."

Apollo, the narrator's slobbering, bed-hogging, hangdog houseguest, takes this book to another level. The narrator wonders what we really know about animal suffering and anxiety: "They don't commit suicide," she writes. "They don't weep. But they can and do fall to pieces. They can and do have their hearts broken." The dog, however apathetic, gets the narrator out of herself and her apartment, walking and talking. She discovers that he's soothed by her reading aloud. They each find their own measure of comfort in Rainer Maria Rilke's Letters to a Young Poet. Pondering his famous definition of love, she reflects, "What are we, Apollo and I, if not two solitudes that protect and border and greet each other?"

The Friend opens tellingly with a provocative epigraph from Nicholson Baker: "The question any novel is really trying to answer is, Is life worth living?" As her narrator confronts multiple losses, Nunez's affecting novel probes the issue closely. She responds with intriguing observations and questions of her own, including this heartening salve: "What we miss — what we lose and what we mourn — isn't it this that makes us who, deep down, we truly are."