Accessibility links
Trump Says 'Nobody Knows' If An Immigration Deal Can Happen Senate Majority Leader Mitch McConnell has promised to bring up a bill to address DACA, border security and other issues, even if no consensus emerges before the next funding deadline, on Feb. 8.

Trump Says 'Nobody Knows' If An Immigration Deal Can Happen

Trump Says 'Nobody Knows' If An Immigration Deal Can Happen 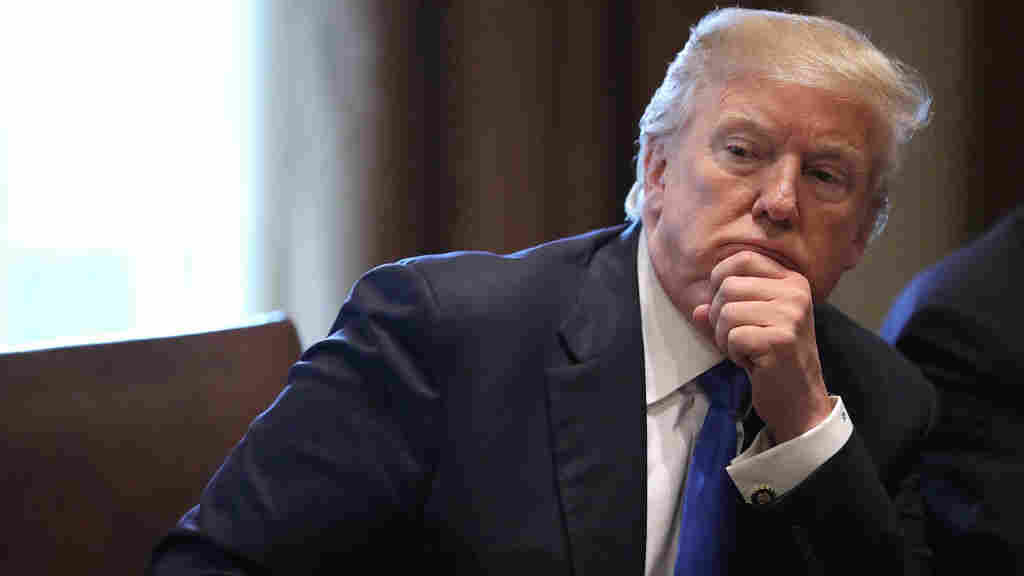 President Trump presides over a meeting about immigration with Republican and Democratic members of Congress earlier this month. Chip Somodevilla/Getty Images hide caption 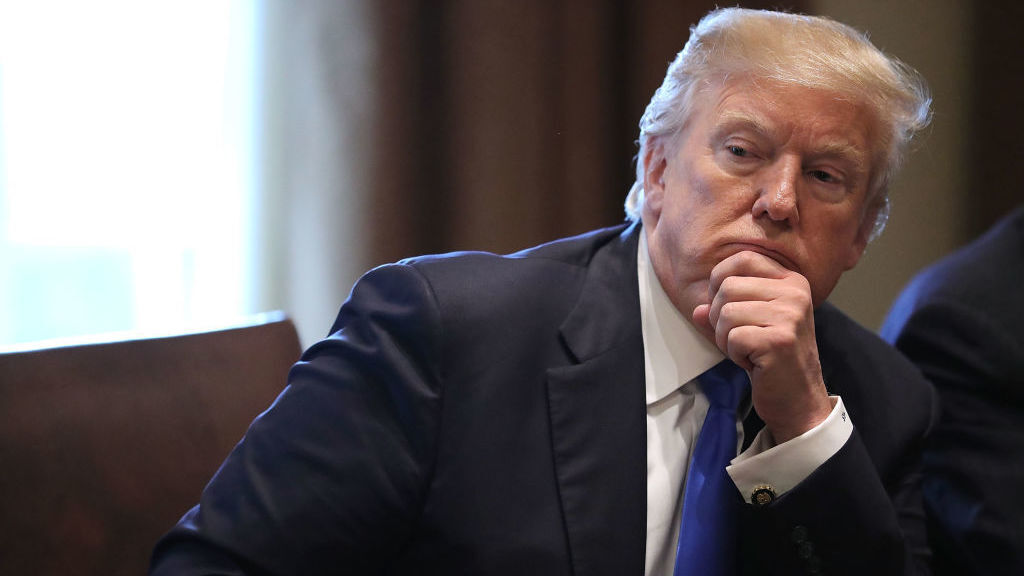 President Trump presides over a meeting about immigration with Republican and Democratic members of Congress earlier this month.

The federal government is back open for business on Tuesday, but the immigration fight that brought it to a three-day shutdown is far from over.

On Monday, Congress passed a stopgap spending bill that funds the government through Feb. 8, with Democrats crossing over to back the measure in exchange for assurances that Senate Majority Leader Mitch McConnell, R-Ky., would bring an immigration bill to the floor. McConnell said he would pursue legislation to address the legal status of roughly 700,000 immigrants protected by the Obama-era Deferred Action for Childhood Arrivals program, which will expire in March, as well as border security and other issues.

President Trump weighed in on Twitter on Tuesday morning to congratulate his staff for its work over the past several days, after much chatter about how little the president himself was involved in the deal-making. Trump also acknowledged the big task ahead on working out an immigration deal in 16 days.

Thank you to General John Kelly, who is doing a fantastic job, and all of the Staff and others in the White House, for a job well done. Long hours and Fake reporting makes your job more difficult, but it is always great to WIN, and few have won more than us!

Congress also needs to agree on a long-term funding plan, which is thought to be close at hand, but there are several reasons why finding a bipartisan solution on immigration is far from easy.

To begin with, Trump has been inconsistent on what kind of immigration bill he would sign, despite an insistence otherwise from White House press secretary Sarah Huckabee Sanders on Monday. The broad framework is that, in exchange for a permanent fix for DACA, the president wants funding for the border wall he touted frequently during the campaign, along with an end to what he calls chain migration — or legal immigrants bringing other family members to the U.S. — and an end to the visa lottery system.

Sanders said Tuesday that the bipartisan compromise negotiated by Sens. Jeff Flake, R-Ariz.; Lindsey Graham, R-S.C.; and Dick Durbin, D-Ill., was "totally unacceptable to the president and should be declared dead on arrival" because it doesn't meet those benchmarks.

But when Trump held a bipartisan discussion with lawmakers earlier this month, he signaled that he would sign whatever bill Congress sent him, even if he wasn't "in love with" it and that he would take any backlash from both sides. Senate Minority Leader Chuck Schumer, D-N.Y., has said that he offered Trump funding for his border wall on Friday, hours before the shutdown started, as part of a deal for DACA protections but that Trump's chief of staff, John Kelly, later called to say the deal was off.

Schumer reiterated Tuesday that the wall was now off the table and argued that Trump's inability to negotiate was what had led to the shutdown.

Tensions were already inflamed after Trump reportedly used a vulgarity to refer to African countries and disparaged Haiti during a discussion of U.S. visa and immigration policies with a bipartisan group of senators earlier this month.

On Monday, Sanders wouldn't commit to Trump's supporting a path to citizenship, instead of simply a legal status for the "DREAMers." That is the common name given to those who are in the U.S. illegally after entering the country as children. For Democrats, and even some Republicans, a status short of citizenship could be a nonstarter.

And even if a bill passes the Senate, it could have a much tougher time in the House, where Republicans say they will not be bound by any deal made in the Senate. The last time the Senate passed a major immigration overhaul bill, in 2013, it died a year later in the House.

Trump did meet with six GOP senators on Monday to discuss "the next steps on responsible immigration reform." That group included immigration hard-liners such as Sens. Tom Cotton, R-Ark., and David Perdue, R-Ga., who were not members of the bipartisan group that has been working to find a solution palpable to both sides. Not in attendance were Graham and Flake, who are part of the bipartisan group, but Sen. James Lankford, R-Okla., who has spoken out in favor of protecting DACA recipients, was there.

Both Parties Claim Public Support In Shutdown Struggle. Who's Out Of Touch?

Graham — once a strident opponent of Trump's who has developed a cozy relationship with the president over the past few months — said over the weekend that he is skeptical of many of the president's advisers, especially White House senior policy aide Stephen Miller, who push Trump in a conservative direction on immigration as soon as he seems to want a compromise.

The president also conferred with two conservative Democrats at the White House on Monday, Sens. Joe Manchin of West Virginia and the newly elected Doug Jones of Alabama. Upon returning to the Capitol, they said that specifics weren't discussed but sounded optimistic that an immigration deal could be reached.

"I think he's very much committed to relieving this DACA challenge that we all have. I don't think anyone wants to be in it, no one is insensitive about that. In talking with his chief of staff, Gen. Kelly, I'm just hopeful we can find that pathway forward. ... The House is going to have to do their thing, but the Senate is in a position to move forward, and he's hoping that they'll come to something that they can all live with," said Manchin, who faces a tough re-election campaign in November. He's one of 10 Democrats running again in states that Trump won in 2016.

Further direct talks with Trump may have to wait. He is slated to travel to Davos, Switzerland, this week for the World Economic Forum. The president's first State of the Union address on Jan. 30 provides him a highly visible opportunity to expand on what he wants in a bill, just over a week before the critical deadline.

While some Democrats and progressive groups said that Schumer "caved," more moderate lawmakers expressed optimism that McConnell would keep his promise to bring a bill to the floor. That is despite the fact that he hasn't yet fulfilled pledges to other lawmakers in exchange for their votes in December on the GOP tax bill.

"It's one thing to make a promise behind closed doors in a conversation. It's another thing to be before C-SPAN and before the whole world saying, 'I will bring a bill forward, it will be neutral, it will be an open, level playing field.' That's a commitment," Sen. Angus King, I-Maine, who caucuses with Democrats, told NPR's All Things Considered on Monday.

Speaking after Senate lunches on Tuesday, McConnell also stood behind his promise.

"I intend to keep my word," the majority leader said.