Accessibility links
Gorgeous Colors and Fraught Feelings Spill Over In 'The Lie' Tommi Parrish's new graphic novel is about a seemingly inconsequential encounter — old, estranged friends spend a few hours talking and drinking — but it's bursting with style and emotion. 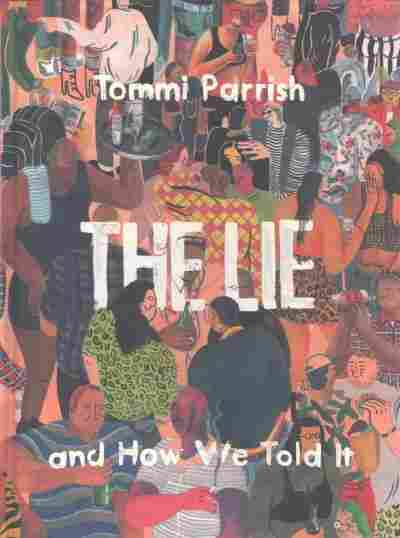 The Lie and How We Told It

Title
The Lie and How We Told It
Author
Tommi Parrish

Egoism and humility pulse like alternating current throughout Tommi Parrish's graphic novel The Lie and How We Told It — which isn't surprising. Creators who draw slice-of-life comics inevitably bounce between the highs and lows of artistic self-regard. On the one hand, they take on material that's small in scope and thoroughly familiar: emotions we've all felt before. On the other hand, they've got the chutzpah to try and make us experience those feelings in a whole new way.

Like Eleanor Davis in a sober mood or Nick Drnaso with the brakes on, Parrish spotlights brief moments, ignorable and usually ignored, in which humans lacerate each other invisibly. The story of The Lie would fit onto two inches of newsprint: Old friends, now estranged, run into each other and spend a couple of meandering hours drinking and catching up. That's it. There's a low-key denouement, but the book certainly doesn't build up to a cry of private agony, like Parrish's 2016 effort, Perfect Hair. At one point the protagonist, Cleary, even says, "That's it? That's the whole story?"

And yet, by the end of this rambling and inconsequential conversation, Cleary's tender heart is as exposed as if she'd screamed about it. (Exposed to us, that is. As is common in this kind of story, the one who wounded her departs the tale more-or-less as clueless as ever.)

Parrish handles the characters' voices deftly, but The Lie might have felt slight if not for a weighty slap of capital-S Style. The book is a big hardcover with the front cover and endpapers bedecked with kaleidoscopic crowd scenes in full color, which continues throughout much of the interior. Parrish employs standard panel structure, but in every other way departs from the usual, combining a wide range of hues, unexpected tricks with opacity and perspective and dense, shaggy shading. The characters are ever-shifting zones of pigment. Heads and hands, in particular, are never stable — the former might shrink to the size of golf balls, while the latter become huge, clumsy paws.

Often these figures lack all but the most rudimentary expressions, underlining Parrish's implicit contention that the most important stuff is on the inside. At one point, a few word balloons show what the people "disinterested[ly] mingling" in a crowded bar are talking about: "Networking ... money ... cats." But that doesn't mean these people are free from feeling. It's just that, as Parrish observed in Perfect Hair, "the noise of being alive is deafening sometimes."

It's ironic, then, that all the color and visual effects should feel a bit overwhelming. Things get quieter in a book-within-the-book, printed in black and white on uncoated buff paper interspersed with the color sections. In the main story, Cleary finds this small volume under a bush. Called "One Step Inside Doesn't Mean You Understand," it tells of a relationship between an exotic dancer and one of her clients. Since it's a graphic novel too, it seems to allow Parrish to communicate directly with Cleary. The message? Everyone's alone, but only some realize it. "I take my long brown wig off and show him my shaved head," the dancer writes. "This gesture of simulated vulnerability usually gets me good tips."

Parrish handles the characters' voices deftly, but 'The Lie' might have felt slight if not for a weighty slap of capital-S Style.

The clear-line style of "One Step Inside" shows Parrish's wonderful versatility. Stripped down to their outlines, the shapes are both cool and fleshy, like apples and pears in a still life, and the juxtaposition of sharp geometric spaces with the curving lines of the figures within feels somehow brutal. "One Step Inside" looks sparse in comparison to all the color and movement in the main story, but paradoxically, it packs more of a punch.

Once she's read "One Step Inside," Cleary leaves the book behind on the train. It's clear that she's not discarding it, but allowing it to be discovered by some new stranger. The Lie as a whole begs to be passed on in the same way. Its themes may appear simple, but its emotions linger — even if we've felt them before.