Accessibility links
For One Family, Contract Work Means 'Feast Or Famine' As Income Varies An NPR/Marist survey found that 1 in 5 workers is a contractor, not a steady payroll employee. For about half of these workers, income can vary greatly from month to month, making budgeting difficult. 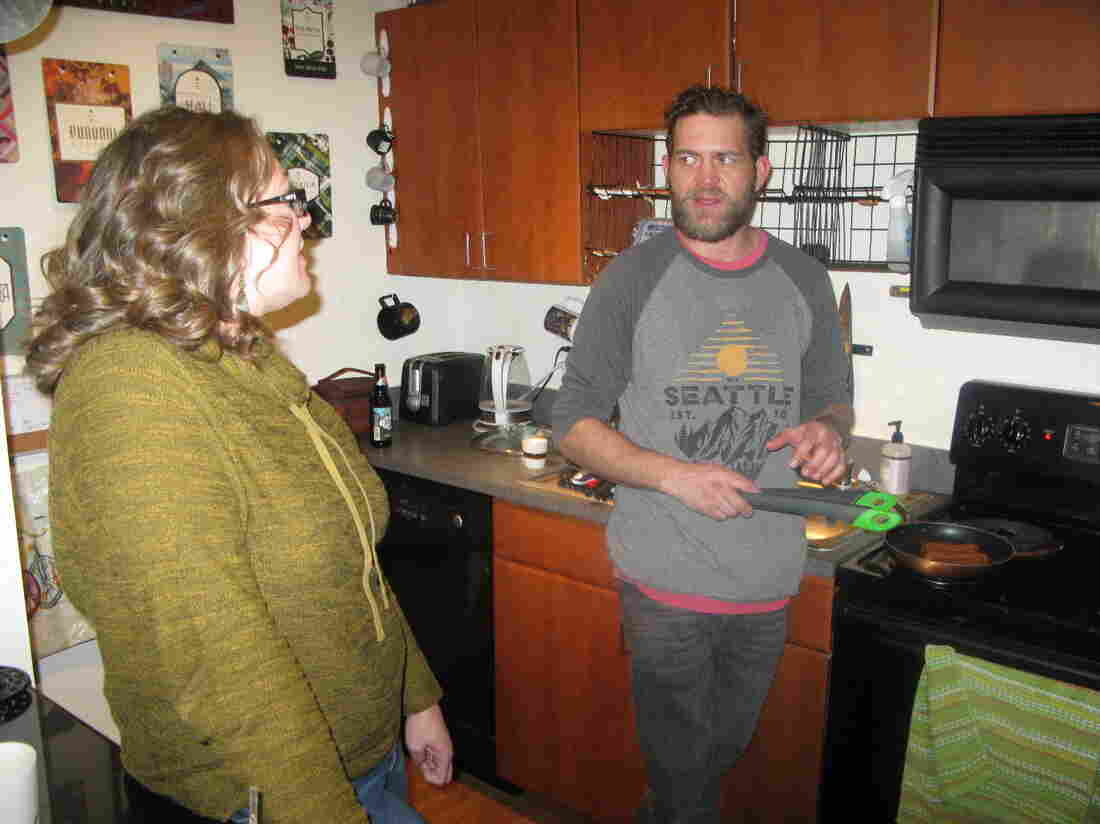 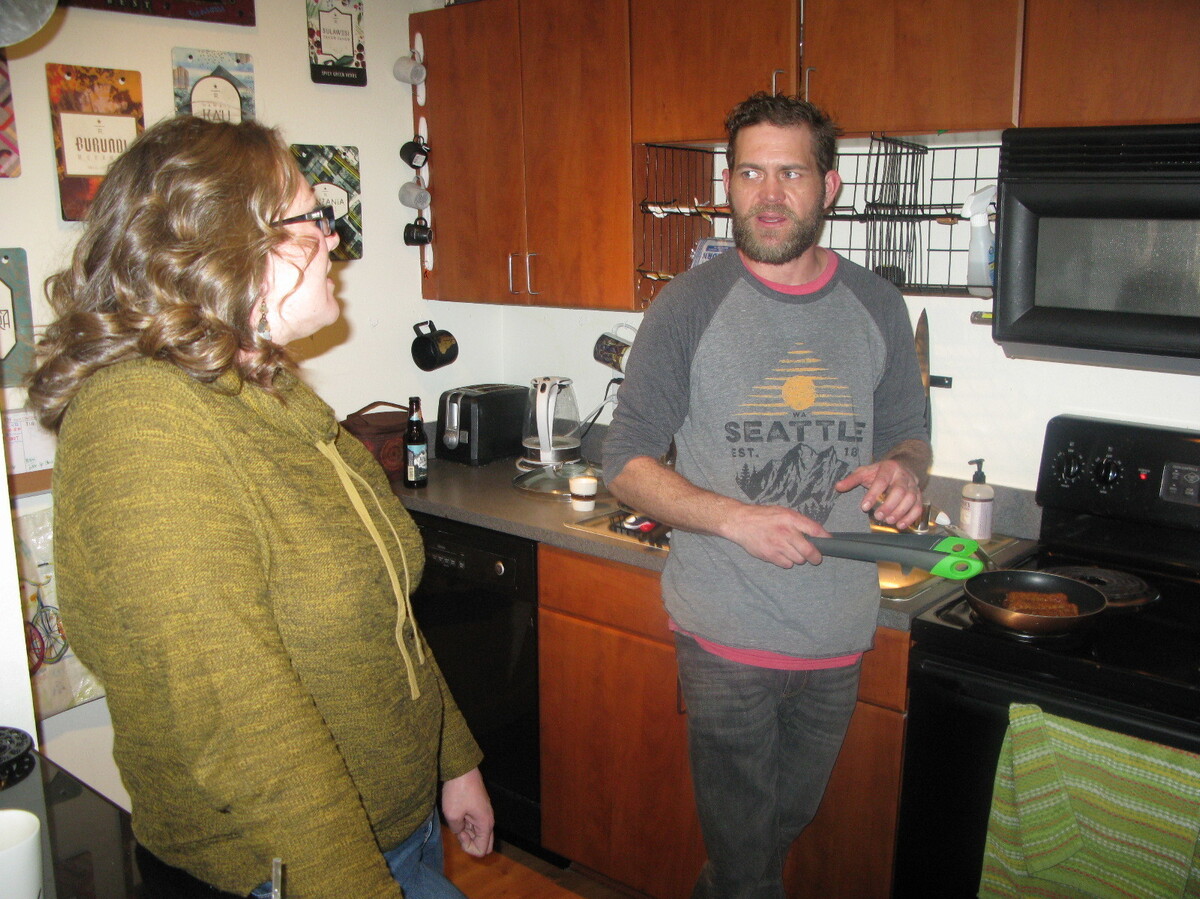 Tom Hansen's irregular pay leaves him and his wife, Gina Barr, juggling their finances to pay the bills.

For Tom Hansen and his family, the past few weeks have been a time of feast or famine.

December was especially busy at the suburban Denver restaurant where Hansen works, and the 39-year-old was given plenty of shifts. But now with the holidays over, he has been working a lot less.

"We had a great Christmas," his wife, Gina Barr, 37, says with a laugh. "But when you drop into January and that income now slices in half, that's a little bit harder to deal with."

About a fifth of Americans work on contract, hired for specific projects or for a fixed period of time, according to a new NPR/Marist poll. Like the Hansens, nearly half of them have incomes that vary greatly from month to month or seasonally.

"There are very high levels of income and spending volatility, not just for low-income people, but for all people across income [groups], " says Diana Farrell, president of the JPMorgan Chase Institute, which has studied the U.S. workforce.

Many people actually prefer contract work, because of the flexibility and freedom it allows, Farrell says. But as Hansen and Barr can tell you, there's a downside as well.

Until last year, the couple lived in Utah, where both held full-time jobs. Barr worked at a telecommunications company and Hansen managed fast-food restaurants.

The hours for both were punishingly long, and they couldn't spend as much time with their kids as they wanted. (The Hansens are a blended family; each has two children from a previous marriage.)

They moved last year to the Denver area and live in a two-bedroom apartment in Englewood. Both Barr and Hansen grew up in the area, and with plenty of relatives around, they have a lot more family support in Colorado.

But the cost of living is higher in the Denver area, and for now they make less money.

Barr works as a shift manager at Starbucks, starting her day well before dawn and returning home at about 11 a.m. The job comes with benefits, including health insurance for the family.

Hansen is a banquet server at a large nearby restaurant, where he earns good money in tips. The hours are irregular, however, and he can't be sure how much he will earn in a single month. 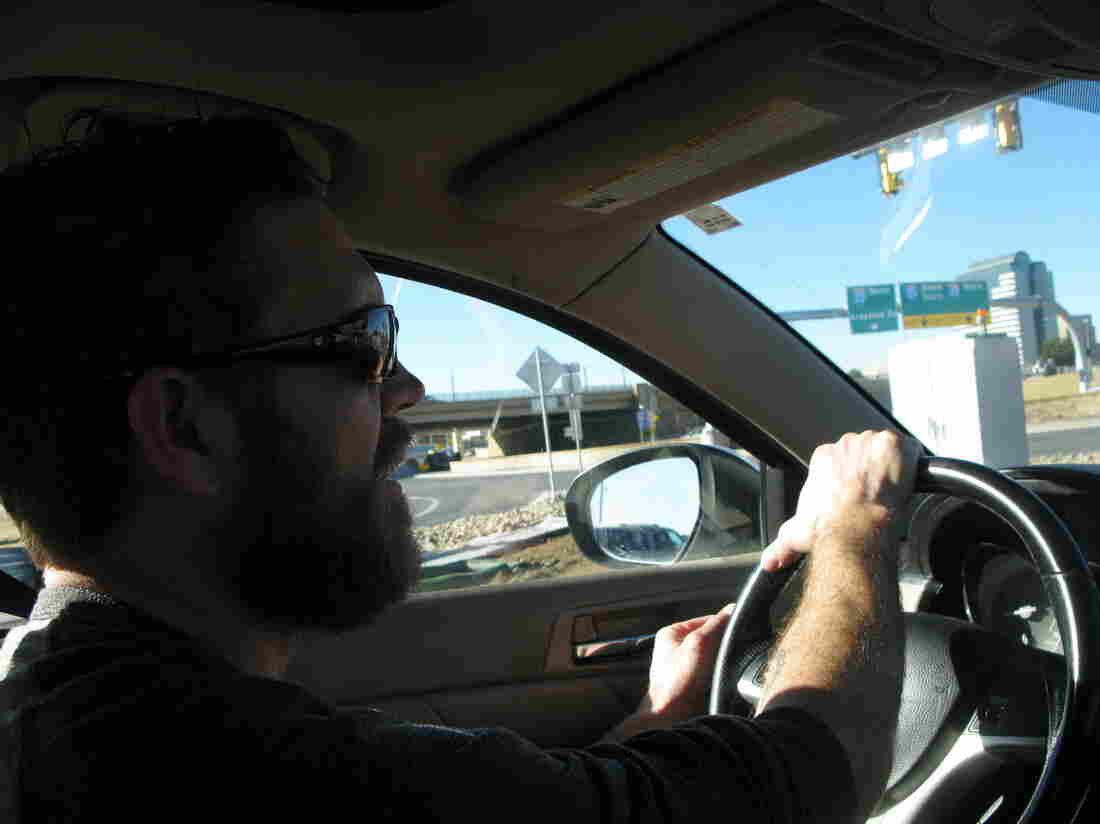 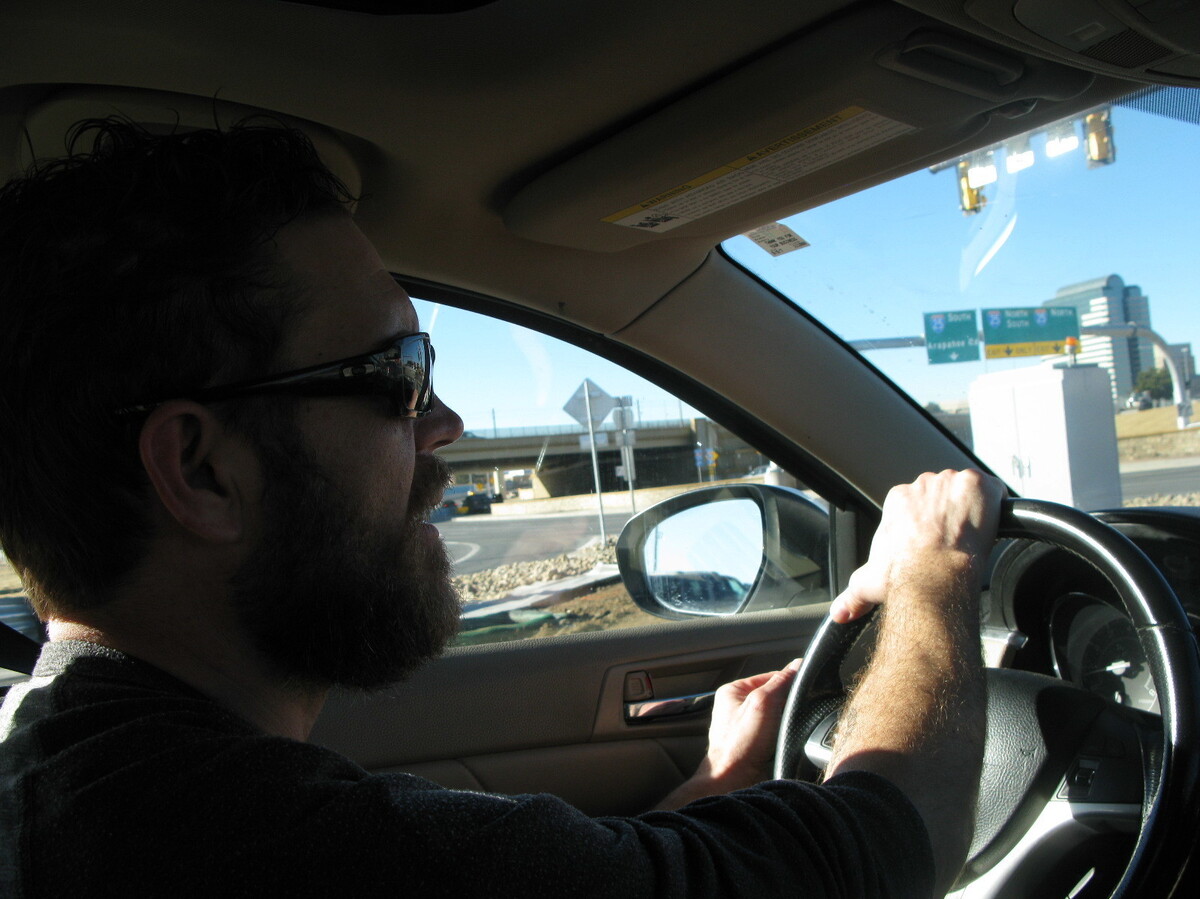 Tom Hansen sometimes turns to driving for Lyft to make extra money because his restaurant job has irregular hours and pay.

To supplement his pay, he sometimes drives for Lyft, the ride-hailing company.

Hansen and Barr have also picked up a little money here and there by selling some of the possessions they brought from Utah on sites such as Facebook Marketplace.

It's not just about money: They are trying to declutter their home, keeping only what they really need.

A lot of people with fluctuating incomes earn extra money by selling items, renting rooms or providing transportation, via platforms such as eBay, Airbnb and Uber, Farrell notes. For most it's not a main source of income, but a way to supplement earnings when needed, she says.

"People are using these platforms to reduce volatility in their income," Farrell says.

Barr and Hansen's household is typical in another way: Like a lot of families living on irregular incomes, they have little money set aside to take care of unexpected expenses — like a sudden trip to the doctor or a car repair. They're still learning how to regulate their spending.

Last year, after doing especially well, the family took a vacation to California.

"We came back and then all of a sudden there was no work, and we couldn't even pay rent," she says. "It was very difficult, and we were scrambling. And we were like, 'Was it us? Did we just spend too much?' And you kind of question and doubt yourself, I think, at moments. 'Am I doing the right thing?' "

Hansen credits his wife for getting them through the slow periods. She knows how to prepare inexpensive meals or ask for more time to pay a bill.

"She's definitely the planner in the family, and through her survival brilliance, we've gotten through a lot of tough months when the shifts have dropped off, and we've made a lot less money," Hansen says.

Barr says having to juggle funds is "like nails in my brain. I hate doing it. ... I prefer to just let everything get paid when it needs to get paid. We're not frivolous people. We don't spend a lot of money."

Rough spots aside, the couple are optimistic about the future and happy with their current jobs. Barr, who loves all things coffee, is angling for a promotion at Starbucks.

The family has traded immediate security for a better future, and Barr figures everyone is still learning to adapt to the new life. While she and Hansen get their feet wet, they need to find a way to stabilize their finances, she acknowledges.

"I just want enough from both of us to not have to worry, to not play the feast-or-famine game," she says.