Accessibility links
Amid #MeToo, Evangelicals Grapple With Misconduct In Their Own Churches Christians focus deeply on a narrative of sin and redemption, but that theme can complicate how church leaders respond to sexual misconduct within their own ranks. 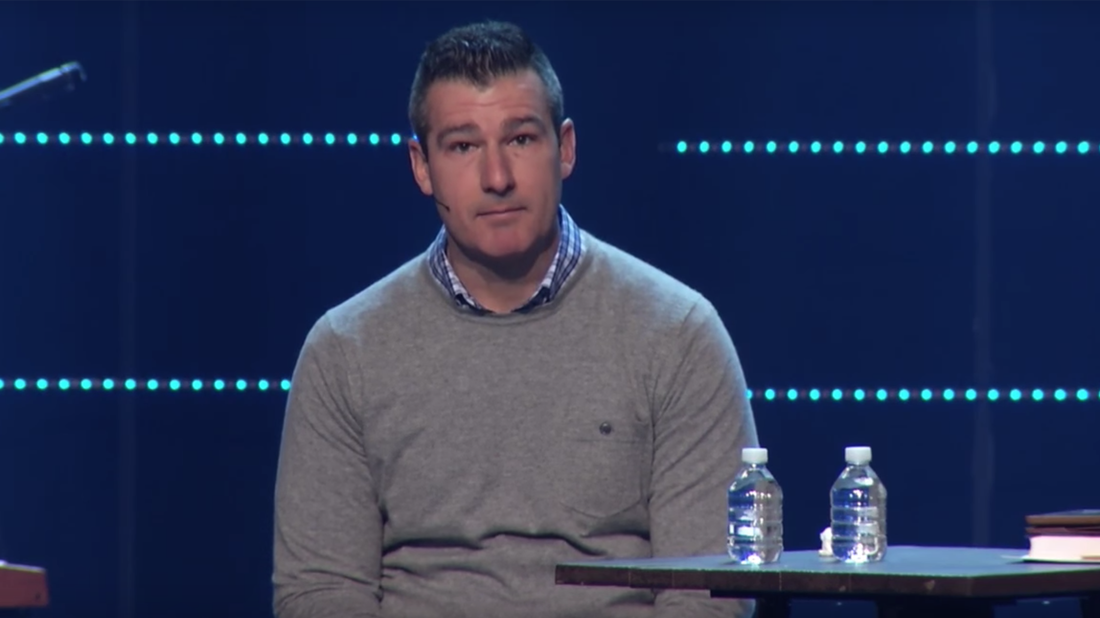 Tennessee pastor Andy Savage confessed before his congregation to what he called "a sexual incident" in 1998 with a 17-year-old girl, Jules Woodson. Highpoint Church/Screenshot by NPR hide caption 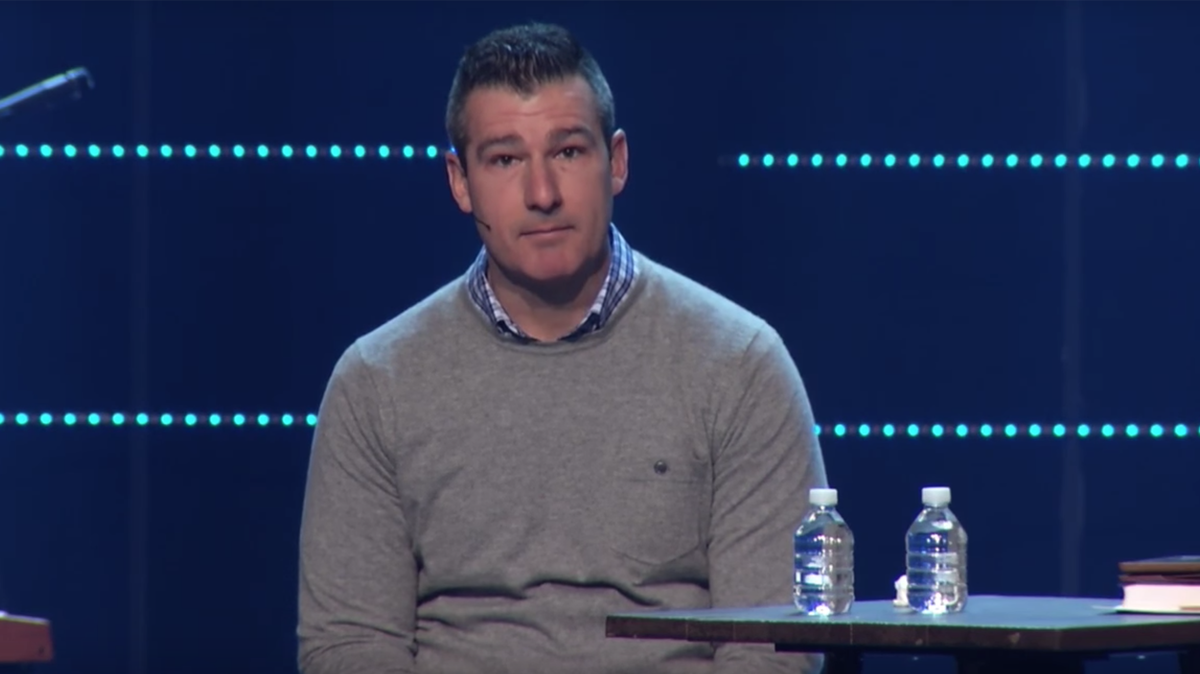 Tennessee pastor Andy Savage confessed before his congregation to what he called "a sexual incident" in 1998 with a 17-year-old girl, Jules Woodson.

The #MeToo movement, having exposed alleged sexual misconduct from Hollywood to Capitol Hill and in board rooms and news rooms, has now reached into evangelical Christian circles, raising questions unique to that faith culture.

Christians focus deeply on a narrative of sin and redemption, but that theme can complicate how church leaders respond to sexual misconduct within their own ranks. Heartfelt confessions and a celebration of divine forgiveness may not be enough.

That challenge was made clear for some evangelicals earlier this month when a young Tennessee pastor, Andy Savage, stood before his congregation and emotionally confessed to what he called "a sexual incident" in 1998 with a 17-year-old girl, Jules Woodson.

In an abuse survivors' blog, Woodson wrote that Savage, then a youth pastor at a different church, had pressured her to perform oral sex on him one night after offering to drive her home from a youth event. Woodson said Savage subsequently apologized but asked her never to tell anyone. She said she informed a senior pastor at her church who then told her that the church would deal with Savage on its own and that she should keep what happened to herself. Woodson revealed the incident, she said, only because she had emailed Savage about it recently and gotten no response.

In his January 7 appearance before his congregation, Highpoint Church in Memphis, Savage said he tried to handle his encounter with Woodson "in a Biblical way," in a belief that "God's forgiveness is greater than any sin." He became emotional as he spoke, looking down at his prepared remarks.

He concluded by apologizing "for any painful memories or fresh wounds this has created for anyone" and asking his congregation for forgiveness.

A video of his confession posted on his church's YouTube page has gotten a lot of attention in evangelical circles, though less because of the pastor's confession than because of the congregation's response. They gave him a standing ovation.

Some evangelical women have seen in that reaction a tendency in their faith culture to celebrate people just for tearfully confessing their sins, no matter whether they have been held accountable for their misconduct.

"There really has to be a reckoning"

"Christians love a redemption story," says Katelyn Beaty, editor-at-large for Christianity Today. "That really gets to the heart of what Christians believe: God can redeem the most broken of people, the most broken of sinners. And we love stories that have a dramatic twist. If I highlight how bad I was or how bad I sinned, then the story of the grace and forgiveness that God offers is all the more amazing."

Beaty, who has focused in her own writing on the evangelical reaction to the #MeToo movement, says forgiveness is incomplete when a church leader like Andy Savage confesses to sexual misconduct with a woman only to have the story end there.

"In these cases, you have a very vertical understanding of forgiveness, something that happens between the perpetrator and God," she says. "But we lack a horizontal understanding. There really has to be a reckoning with the wrong done to this woman."

"Issues of sexual abuse and exploitation and gender discrimination are not just for one political party or type of theology," says Kelly Rosati, vice president for child advocacy at Focus on the Family, a conservative evangelical organization. "People are not exempted by their culture. Churches are not exempt. This is an issue that we have to grapple with."

"We can never get away from the incredible good news of the forgiveness and grace of God," says Rosati. "But that does not obviate the need for law enforcement, for understanding long-term consequences, or for the need to listen to victims and understand their pain. It is absolutely not a magic wand to do away with the serious issues of violation that are inherent in these cases."

After giving Pastor Savage a standing ovation, his congregation prayed for him and his family and for Woodson, his abuse victim. Savage subsequently took a leave of absence from his church, but critics of the church argue that the leadership did too little, too late.

A gap in trust

A sexual sin might actually be a sexual crime, as Roman Catholic leaders learned when they failed to tell law enforcement authorities about priests who were engaged in sexual abuse.

It is a lesson that evangelicals are now learning as well. Whether forgiveness trumps accountability and whether evangelical women may be losing trust in their church leaders have become hot topics in evangelical circles.

"I think everyone who has offended others has to recognize that while God may forgive us, and our friends and our church may forgive us, there may be a trust gap that is going to be hard to overcome," says Darryl Crouch, pastor of Greenhill Church in Mount Juliet, Tenn. "While I may forgive you if you steal my money, I may not trust you to hold my wallet next time I run into the store." When a pastor loses the trust of his congregants, he may be hampered in his ability to lead effectively.

The issue of pastoral abuse is especially sensitive in evangelical churches because many of them hold to what they consider a Biblical view on male and female leadership roles. The Southern Baptist Convention, by far the largest of the evangelical denominations, does not ordain women or encourage them to play official church leadership roles.

Some evangelical women say this attitude has produced a patriarchal culture in their church communities and led church authorities to be reluctant to move decisively against pastors accused of improper behavior.

In the Andy Savage case, Jules Woodson alleged in her blog post that the senior pastors in whom she had confided did not discipline Savage adequately or report him to the authorities and even threw a going away party for him when he moved to another community.

Kelly Rosati of Focus on the Family insists it's important to separate the evangelical belief about distinctive gender roles in the church from the exploitation of power differentials between a pastor and his flock.

"What you saw in that [Andy Savage] incident was a conflating of those two issues," she says, "and a failure to understand that what one person might describe as a sexual incident is really about those other things, power and abuse and violation."

The reaction among evangelical women to the #MeToo movement, Rosati says, suggests it may be a watershed moment for them that will end up "shaking out the ground a little bit in the evangelical community."

This story has been updated to remove a reference to #ChurchToo that was added in the editing process.