Accessibility links
'Logan' Got A Screenplay Oscar Nomination: Superhero Movie Glitch Or Game-Changer? Some 40 years after Superman: The Movie launched the superhero film genre, a superhero movie earned an Oscar nomination outside of the tech categories. (And it wasn't Wonder Woman.) 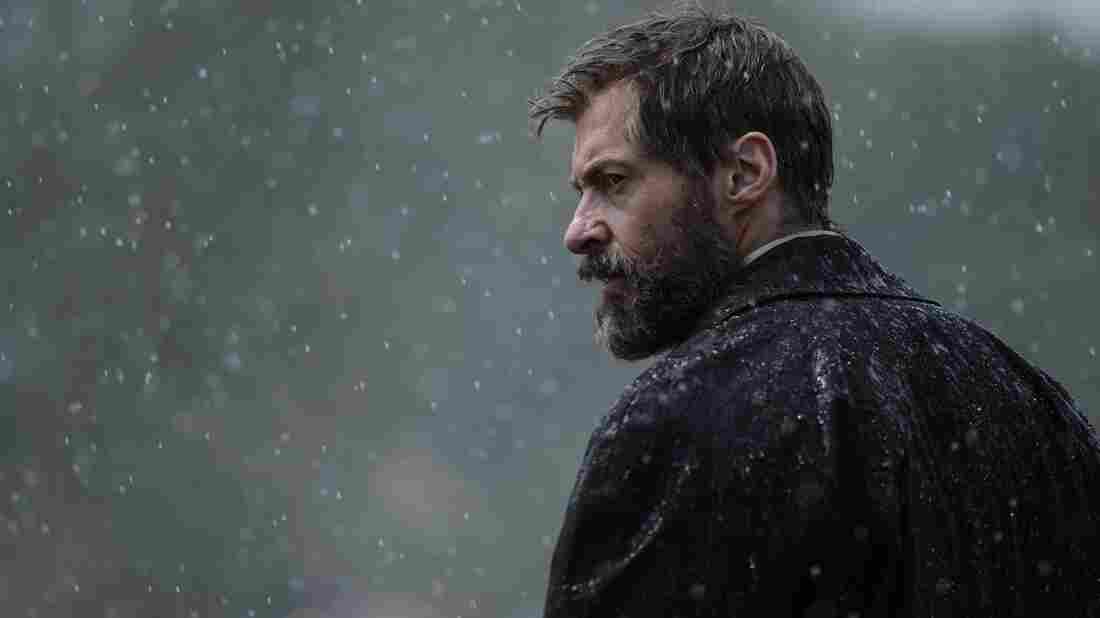 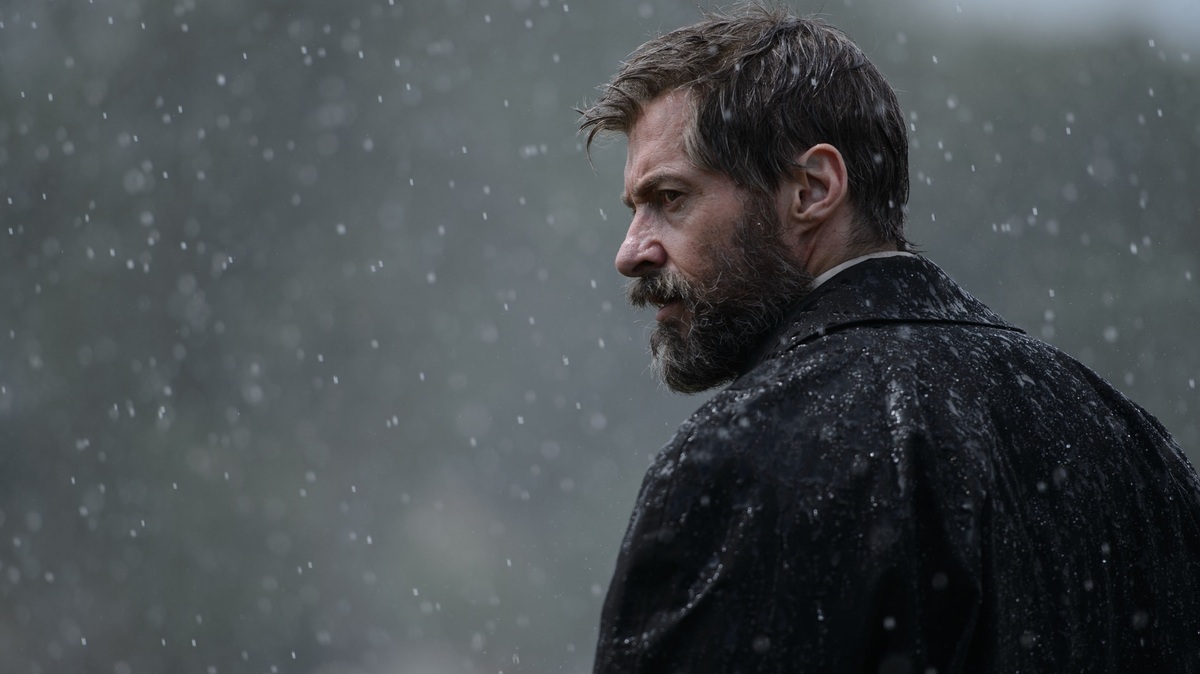 In the not-so-wee, not-so-small hours of the morning Tuesday — 8:30-ish a.m. Eastern Time — a superhero film earned itself an Oscar nomination.

That wasn't so unusual, really. The superhero film genre has been with us for almost 40 years now — dating from that momentous December 1978 day when Superman: The Movie busted its very first blocks — and superhero movies have racked up lots of nominations, and a few wins, over that time.

For sound editing and/or mixing (LOTS of those).

For hair and makeup.

Which is to say: the technical categories.

(See the bottom of this post for a rundown of the superhero films that have received Oscar nods over the years.)

I don't mean to minimize those achievements. After all, it's only because of developments in the tech fields — in visual effects especially — and all the dedicated work of those tech Oscar winners that the superhero film genre can exist at all. They're integral to the suspension of disbelief that fuels these movies: For any superhero story to work on screen, we gotta believe a man (and a woman, and the odd space-raccoon) can fly.

What was unusual — unique, as it turns out — was that when the Academy Award nominations were announced Tuesday, a superhero film got a nod outside of the tech categories, for the first time* in 39 years.

*(A grim caveat, here: Heath Ledger was posthumously nominated for, and won, the Academy Award for best supporting actor for The Dark Knight.)

(One more: The Incredibles, arguably the best superhero film of all time, won best animated feature in 2005. But let's stick to live-action superhero films, you and me.)

It was equally surprising that the nomination in question didn't go to Wonder Woman. (A lot of us were betting that Patty Jenkins' critically praised and widely loved tale of the Amazing Amazon would rack up technical award nominations and had hoped against hope for recognition of Jenkins' directorial work or Matthew Jensen's cinematography or Allan Heinberg's screenplay. None of that happened.)

No, it was Logan, for adapted screenplay — which was written by Scott Frank, Michael Green and director James Mangold, from a story by Mangold. The reason it's competing in the adapted screenplay slot is because the film is loosely based on the comics story arc Old Man Logan, by Mark Millar and Steve McNiven; the character of Wolverine was created by Len Wein, Roy Thomas, John Romita Sr. and Herb Trimpe; and the film's story features characters created by (deep breath): John Byrne, Chris Claremont, Dave Cockrum, Jack Kirby, Craig Kyle, Stan Lee, Marc Silvestri and Christopher Yost.

It feels significant that a film in a genre that currently dominates the box office — a genre that attracts vocal detractors both because of and in spite of its omnipresence — should get recognized for the strength of its story.

But does it signal anything? Is it a fundamental change in how superhero films are regarded aesthetically or artistically? Or is it just a one-off, specific to this particular screenplay, at this particular time?

Is it a game-changer or a glitch?

The case for game-changer

Superhero movies are a genre, and while it might seem that Hollywood, as represented by the academy, has been reluctant to embrace hugely popular genre work. That is simply not borne out by a look at the awards' long history.

The very first film to win best picture was Wings in 1929 — a war film. That was followed by Broadway Melody (a musical), All Quiet on the Western Front (another war film), and Cimarron (a Western). In fact, the academy has handed out plenty of best picture statues to musicals, Westerns, romances, crime stories and thrillers.

So it's not genre, per se, that the academy disdains.

Those genres that have had the hardest time breaking out of the tech-category gulag are also, not coincidentally, the newest: science fiction, fantasy ... and superhero.

Science fiction and fantasy have been making up ground over the past decade or so, with The Martian, Gravity, Inception, Avatar, Arrival, Her, Mad Max: Fury Road, The Shape of Water and others earning best picture nominations, if not wins. In 2004, that highest of high fantasies, Peter Jackson's The Lord of the Rings: The Return of the King, managed to nab the best picture award.

Superheroes have had an even tougher time of it, but the academy has proven itself nominally open to change on that front. Apart from Ledger's Joker, Christopher Nolan's The Dark Knight did not receive any nominations in the major categories, causing a critical and public outcry in 2009. The following year, the academy doubled the number of possible best picture nominations from five to 10. The extension became known as "The Dark Knight Rule."

Perhaps Logan's screenplay nomination, paired with Ledger's win nearly 10 years ago, do represent the leading edge of the academy's embrace of the superhero genre.

... But probably not. A much stronger case can be made that Logan's award success will not be repeated any time soon.

The case for glitch

Granted, superhero films vary more widely in setting, tone, aesthetics and scope than many who are content to sneer at the genre believe, but it's fair to say that Logan is an atypical example of the form. Gritty superhero films are thick on the ground, but Mangold's movie is also intimate, desolate and morally exhausted. It looks and feels different — deliberately so — from the colorful, snarky, world-saving whiz-bangery of mainstream Marvel fare. It plays in pointed contrast to them, in fact, and its future setting seems a wry comment on the ultimate fate of those quippy heroes who go around blithely Avenging things.

It also offers something to viewers that only Nolan's Batman films ever have (spoilers ahead): a superhero story with a definitive ending.

In my book The Caped Crusade: Batman and the Rise of Nerd Culture, I devote a fair amount of ink to the proposition that while hardcore superhero nerds can and do delight in the open-ended, Ragnarok-esque cycle of endless adventure that their favorite heroes perpetually experience, others — casual moviegoers, say — find that notion deeply unsatisfying.

And stories have a beginning, a middle and an unambiguous end. That familiar structure provides closure: Elements introduced in the tale's beginning figure largely in the climax. Action that has risen, dependably falls.

To moviegoers who followed Jackman's Wolverine over the past 17 years with a distant but palpable measure of interest, the utter finality of Logan's conclusion likely landed harder and deeper than any superhero film they've experienced. It felt raw and real and — here is the important bit — different.

The other factor that makes it unlikely that Logan's nomination augurs anything other than the fact that a bunch of people liked Logan a whole lot is the fact that while studio executives love superhero movies — more specifically, the money they bring in — many among Hollywood's creative types continue to harbor a seething resentment of the genre.

Read an interview with a director, screenwriter or actor, and count how many paragraphs it takes for them to start decrying the crass commercialism of the superhero film, or its CGI violence, or its flat characters, all the while blaming the genre's current box office domination for crowding out smaller, more intimate, more artful cinematic endeavors. Like, you know, theirs.

Some filmmakers aren't content to complain. In 2014, Alejandro G. Iñárritu turned his pitched antipathy for the form into the film Birdman or (The Unexpected Virtue of Ignorance) and spent its press junket gleefully calling out the witlessness of movies that were not, you know, his.

That tension isn't going away, which is why, no matter their commercial or critical appeal, don't expect the 2018 spate of superhero films (Black Panther, Avengers: Infinity War, Ant-Man and the Wasp, etc.) to fare any better, come Oscar season, than others have before them.

Neither, I predict, should you hold your breath for Logan to actually take home the statue on Oscar night. The competition is stiff (Call Me By Your Name, The Disaster Artist, Molly's Game, Mudbound). It's also up against a notable milestone, in the case of Mudbound, the very first adapted screenplay nominee co-written by a black woman. And given that Timothée Chalamet's searching performance in Call Me By Your Name is likely to get trammeled, as it has all awards-season-long, by the prodigious latex jowls of Gary Oldman's Churchill in Darkest Hour, look for this category to turn into Call Me By Your Name's consolation prize.

Which Superhero Films Have Been Recognized By Oscar — And For What?

RoboCop (yes, it's a superhero movie don't @ me)

Guardians of the Galaxy

Guardians of the Galaxy Vol. 2

A previous version of this story incorrectly said Spider-Man 2 was only nominated for sound mixing and visual effects. In fact, it won for visual effects and was nominated for both sound mixing and sound editing. In addition, the story also said The Incredibles won for best animated feature in 2004. The movie was released in 2004 but won its Oscar in 2005. Also, the story said The Dark Knight was passed over for best picture in 2008. The movie came out in 2008, but the nominations and awards show were in 2009.