Accessibility links
White House Touts 'Unprecedented' Cooperation Amid Mueller Interview Talks Attorneys for President Trump say they've provided investigators with scores of witness interviews and tens of thousands of documents, but an interview with the special counsel is not yet scheduled. 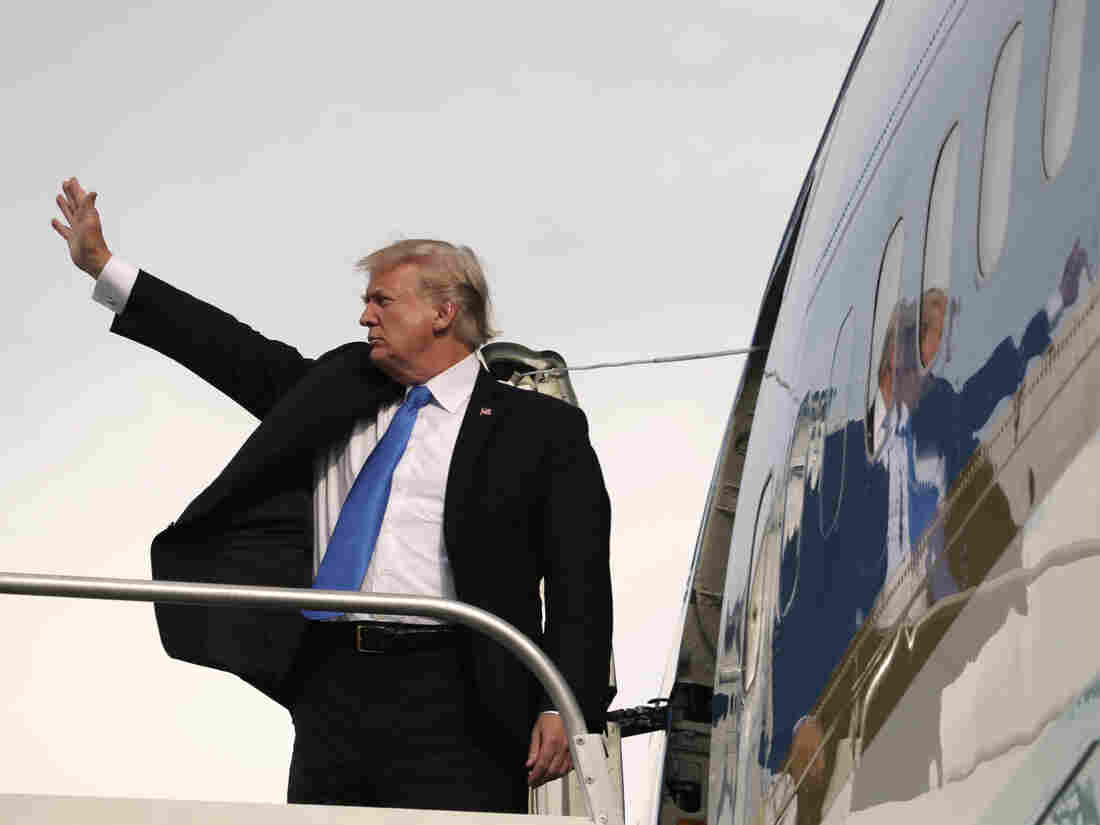 Before leaving for Davos, Switzerland, President Trump paid an impromptu call on reporters and staffers on Wednesday to say how eagerly he looks forward to talking with special counsel Robert Mueller. Andrew Harnik/AP hide caption 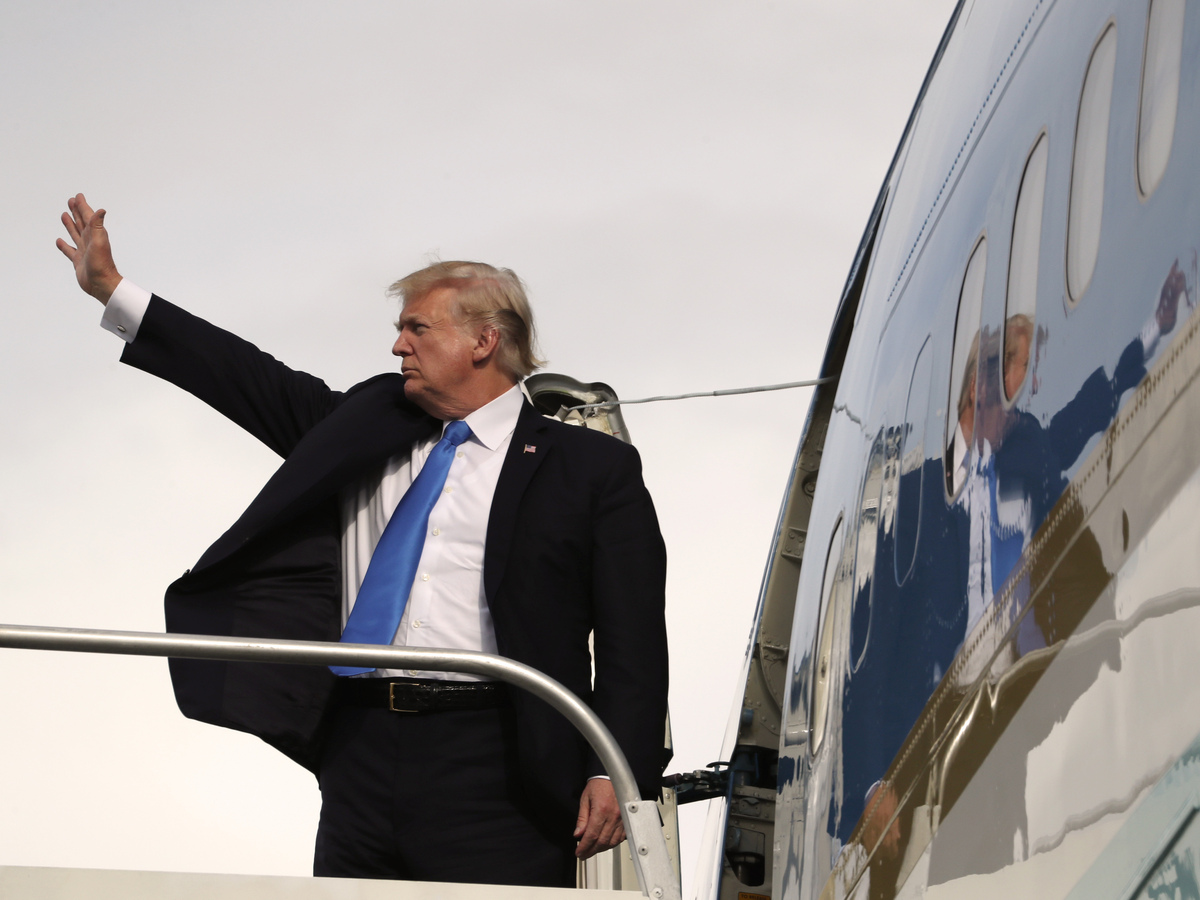 Before leaving for Davos, Switzerland, President Trump paid an impromptu call on reporters and staffers on Wednesday to say how eagerly he looks forward to talking with special counsel Robert Mueller.

Attorneys for President Trump are emphasizing how much they've cooperated with investigators as negotiations continue over how and when he might talk with Justice Department special counsel Robert Mueller.

Lawyers for the president on Thursday released a list that they said detailed the information and access the White House and Trump campaign have given to Mueller's Russia probe and congressional inquiries.

"The cooperation and transparency are unprecedented," their note says.

The document does not list the names or positions of the people who have cooperated or include any new details about a prospective interview between the president and Mueller's investigators. Trump surprised reporters and staffers Wednesday evening when he came into a briefing at the White House and said that he was "looking forward" to talking with Mueller and that he would do so under oath.

Trump's legal team has since made it clear that the talks about any interview are still underway and the particulars have not been worked out.

Attorney Ty Cobb said after the fact that Trump was speaking "hurriedly" before he left on his trip for Switzerland but that the White House's principle about cooperating with investigators would remain in effect.

Mueller has been approaching the president gradually with interviews that progress ever closer from the outside in, including with Attorney General Jeff Sessions and CIA Director Mike Pompeo. Former FBI Director James Comey, whom Trump fired last year, precipitating Mueller's appointment, also has talked with the special counsel's investigators.

Comey has said Trump asked him to lay off the case of former Lt. Gen. Mike Flynn, Trump's former national security adviser who has pleaded guilty to lying to the FBI. The discussions — with Russia's then-ambassador to the United States during the presidential transition — that Flynn has acknowledged lying about are a keystone in the Department of Justice's Russia probe being conducted by Mueller.

Mueller is investigating whether Trump tried to frustrate the FBI's investigation into whether his campaign may have conspired with the Russians who attacked the presidential election in 2016 and, if so, whether Trump or anyone else broke the law.

The president has gone back-and-forth on whether he accepts that the 2016 Russian attack took place or whether it's a "hoax" ginned up by Democrats to provide an excuse for Hillary Clinton's loss — and, therefore, the subsequent investigations are a "witch hunt," in Trump's view.

Most recently, the White House's position has been that Trump accepts that there was a campaign of "active measures," as spies call them, by the Russians against the United States during the 2016 election cycle. White House press secretary Sarah Huckabee Sanders also said this week that Trump does not dispute the conclusion of the U.S. intelligence community that the Russian campaign's aim was to help him win.

A former Trump campaign foreign policy adviser, George Papadopoulos, has pleaded guilty to lying to the FBI about the overtures he received from Russians who offered dirt on Clinton and "off the record" meetings between then-candidate Trump or other campaign leaders and top Russians.

There also were other contacts between Trump aides and Russians who offered help, including a June 2016 meeting at Trump Tower that included Trump's son Donald Trump Jr., son-in-law Jared Kushner, and then-campaign chairman Paul Manafort.

On Wednesday, Trump said at his impromptu appearance that not only did his campaign not collude with the Russians who attacked the election, but also that the contacts between campaign aides and Russians or Russian agents didn't matter.

"I can tell you, there's no collusion," Trump said. "I couldn't have cared less about Russians having to do with my campaign. The fact is — you people won't say this, but I'll say it: I was a much better candidate than her. You always say she was a bad candidate. You never say I was a good candidate. I was one of the greatest candidates."