Accessibility links
After The Vinyl Revival, The Vinyl-Playing Jukebox Is Back Retro turntables anticipated the resurgence of vinyl records. Now, jukeboxes that play vinyl are returning to the market for the first time in more than two decades. 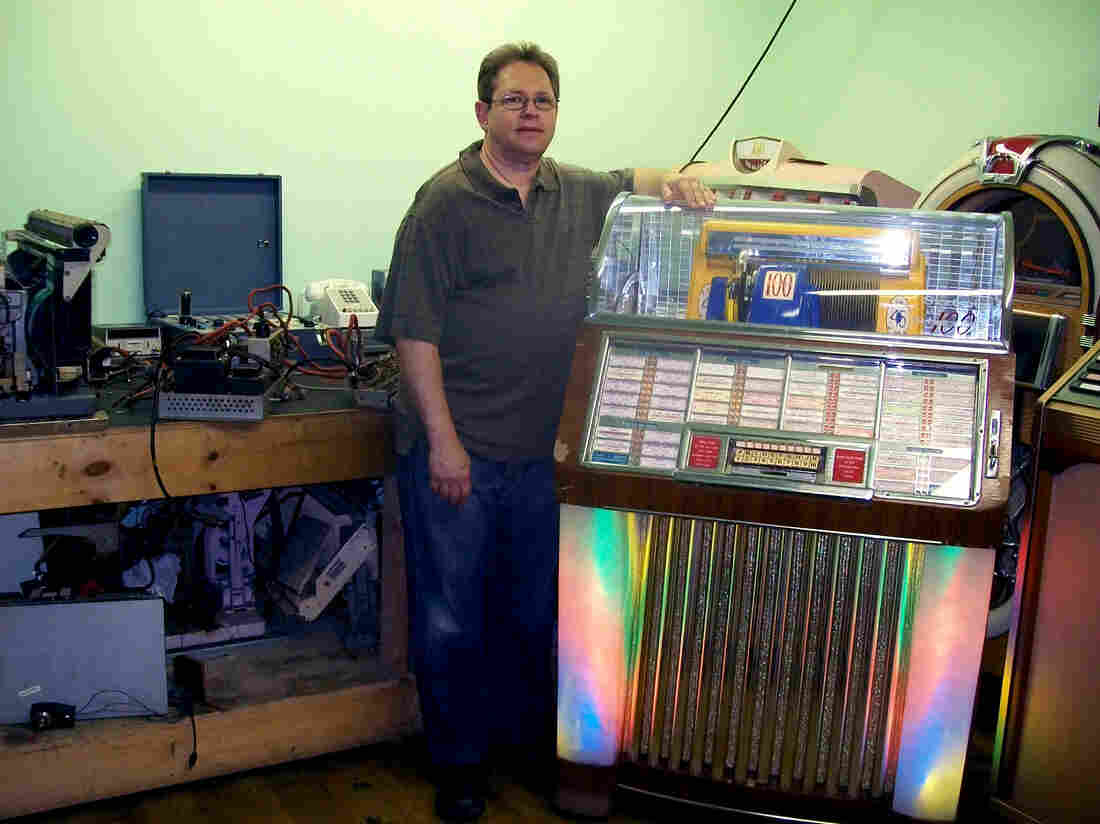 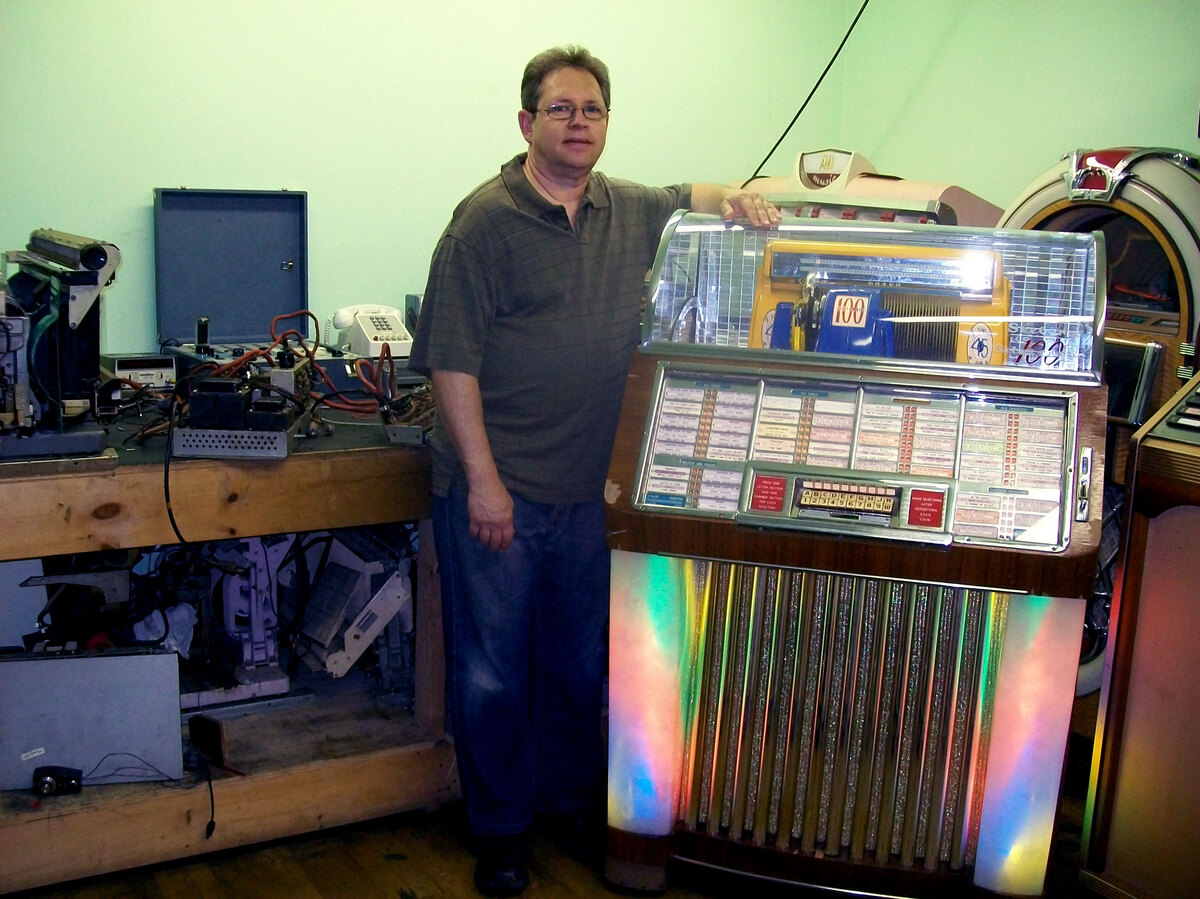 In Sheepshead Bay, Brooklyn, Perry Rosen walks over to a 1967 Rock-Ola Imperial jukebox, punches in a letter and a number and smiles as the song "Spooky" by Dennis Yost and the Classics IV starts spinning.

Jukeboxes have fascinated Rosen since childhood. But unlike other kids whose eyes were drawn to the bubbles rising up through the colorful tubes, Rosen says he was always looking through the cracks in the front door or the dome glass, trying to understand how these machines worked.

Rosen's father was an auto parts salesman. One day he saw a broken jukebox at a local gas station and offered the owner $75 for it, thinking it would make a nice gift for his mechanically inclined son. Over the next week, Rosen, then 16, took the device completely apart and then put it back together again in perfect working order. He explains that the jukebox we're listening to is that very machine. 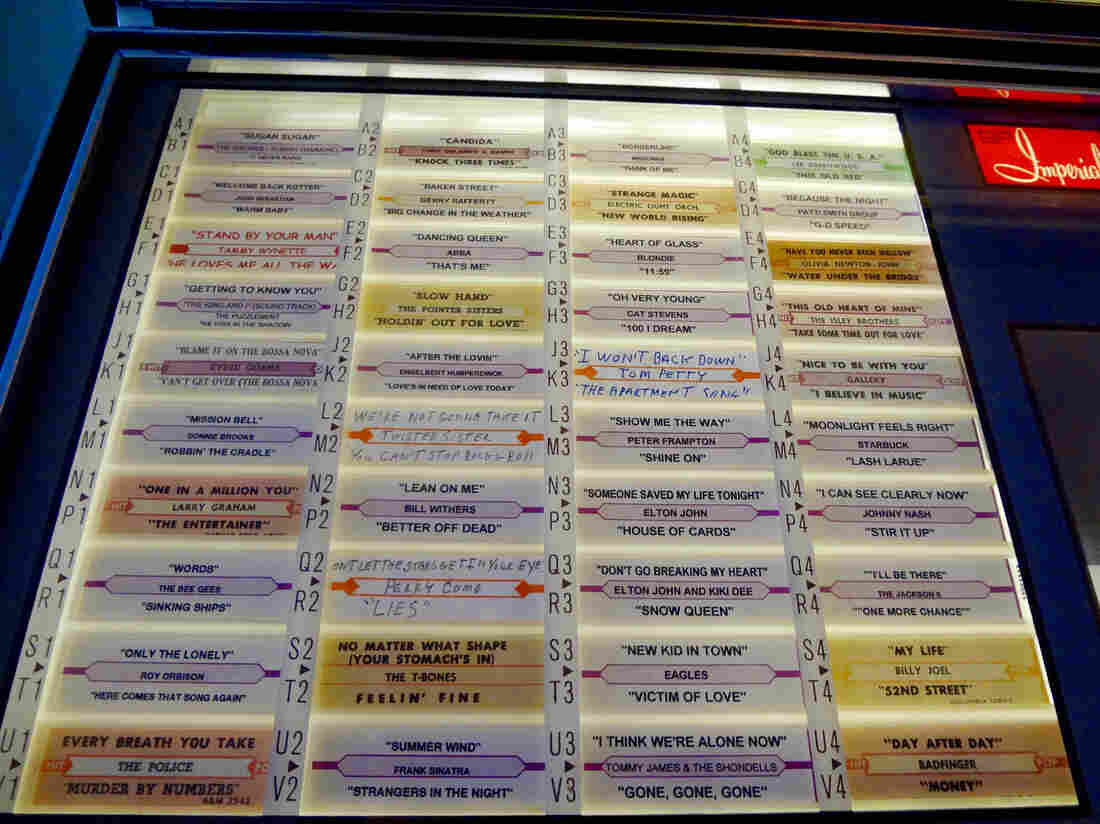 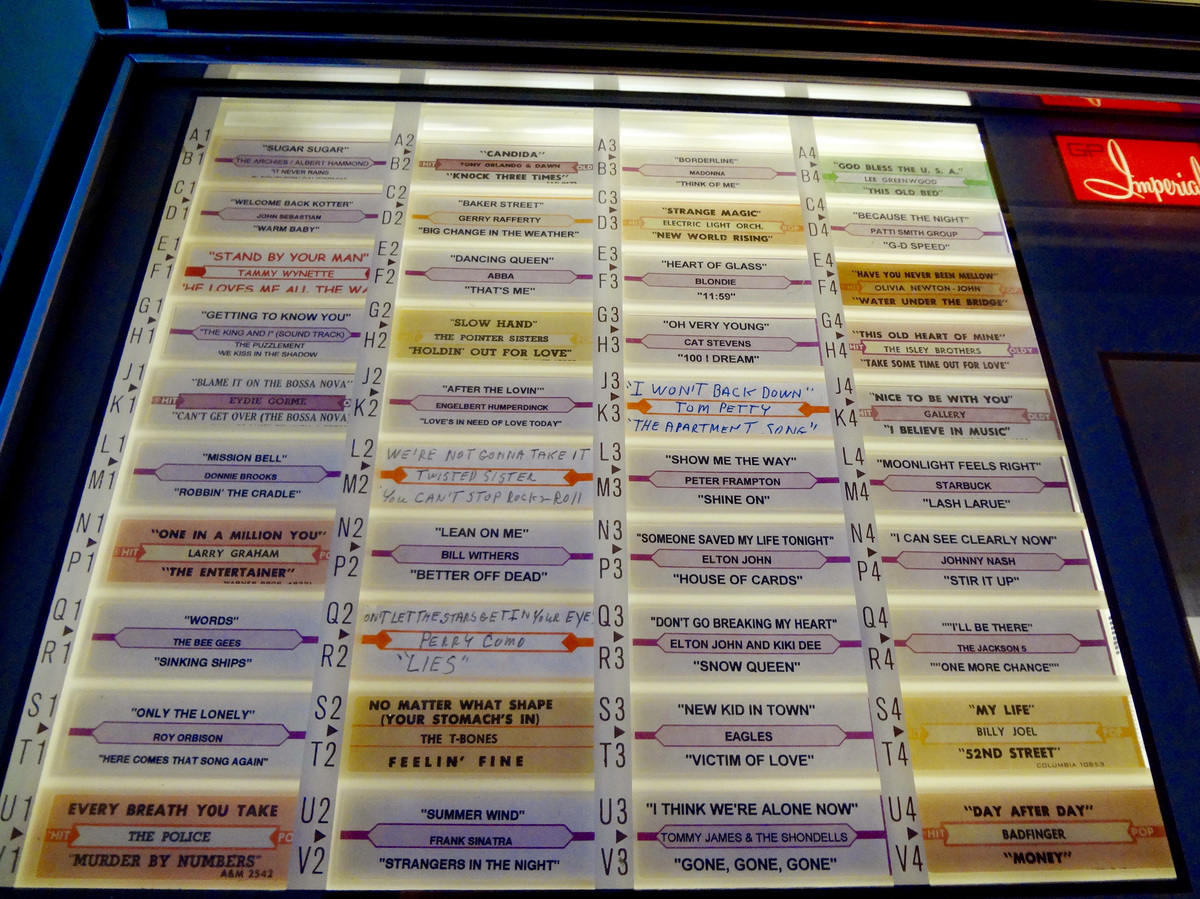 Four decades later, Rosen is in high demand as one of the country's last full-time jukebox repairmen. Most of his work entails making house calls in his minivan, but he's flown as far away as Palm Beach, Fla. for service requests.

"Most of my customers have older machines from the '50s, '60s and '70s," Rosen explains. "They're using them to play their collection of records that they grew up with when they were teenagers. They try to recreate the days when they went to a candy store or a bar. They remember the jukebox playing because there's always a specific song where they met a girl or a guy and it kind of brings back memories."

Back in the 1950s, those teens often listened to their favorite songs on machines with names such as the Seeburg Select-O-Matic, the Rock-Ola, or Wurlitzer. At the height of the jukebox's popularity, there were about 750,000 nationwide. But as discos replaced diners, jukeboxes became rare collectibles.

The repair work has never been easy: Rosen says that the jukeboxes he works on have over 1,000 parts. The electrical contacts, gears, levers, and mechanisms that transfer the records in and out are often hard to come by since many of the machines are no longer in production. 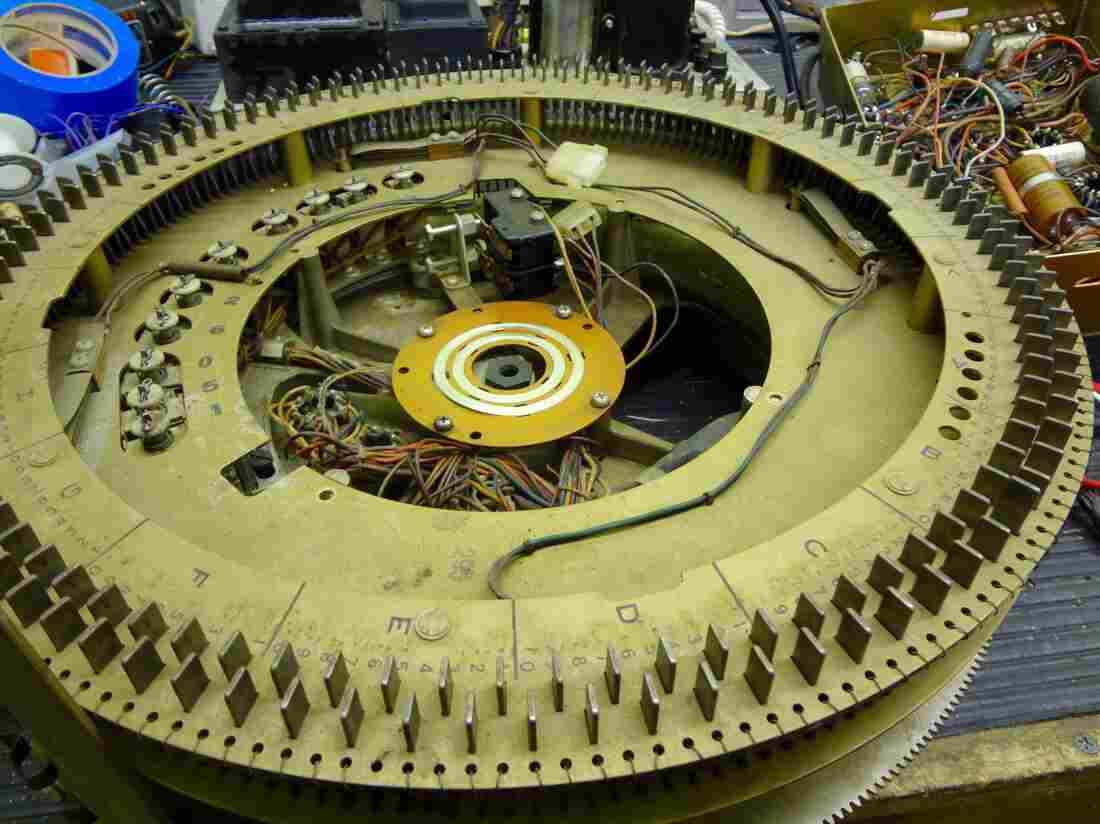 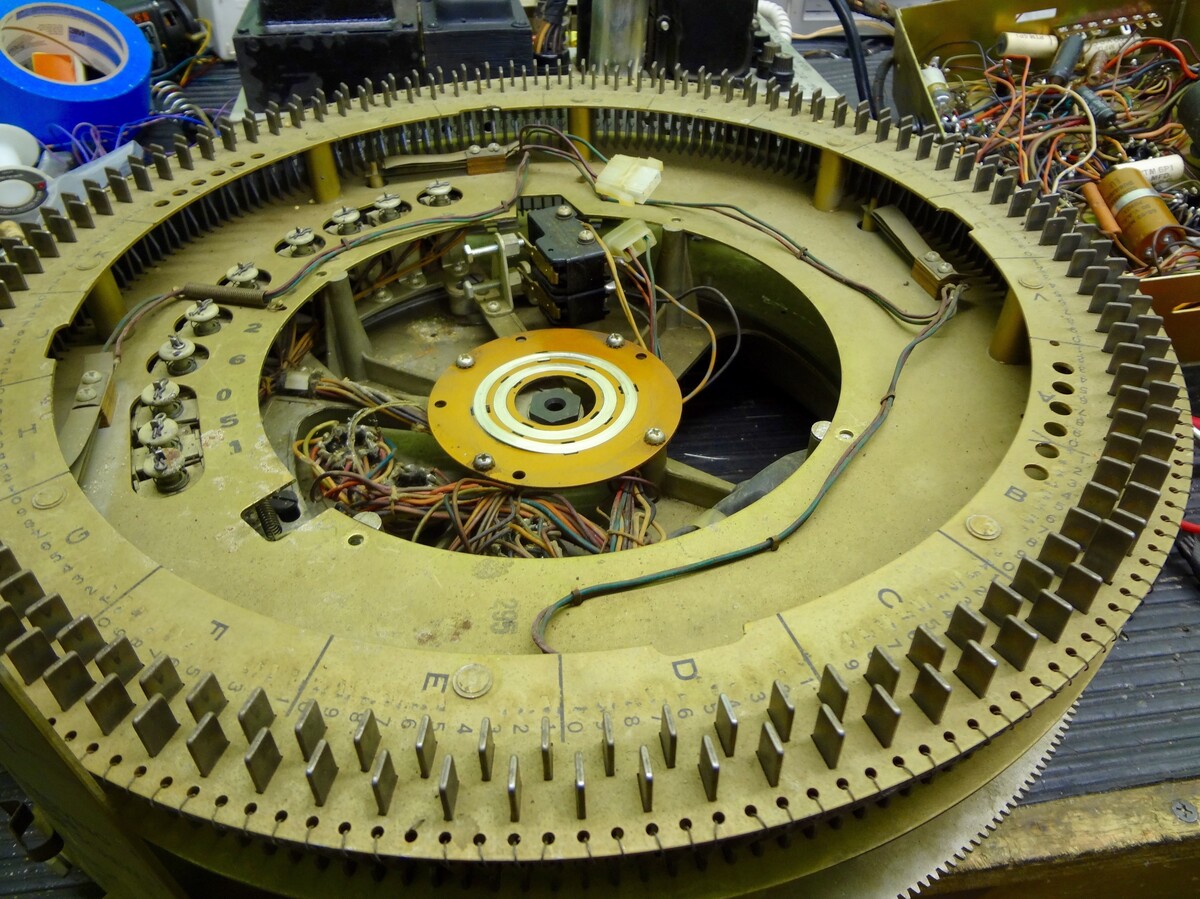 At Perry Rosen's shop, the inner mechanics of a jukebox laid bare.

Rosen's customers aren't exclusively nostalgic baby boomers anymore. He says he's had a recent influx of calls from younger folks who are stocking vintage jukeboxes with garage rock songs and other obscure 45s. In an era when all the world's music is available at our fingertips, it appears there are those drawn to the novelty of the machines and the chance to share their specific musical tastes.

Paul Vivari, a former DJ, opened Showtime Lounge in Washington, D.C. five years ago as an homage to vintage soul and R&B music. A tiny, one-room bar with low ceilings and a limited drink menu, the centerpiece of the place is a custom-built free jukebox — stocked with well known names like Etta James and Howlin' Wolf, as well as an array of lesser known talents, including many local should-have-beens.

Vivari says older patrons remember these songs, while younger ones just like the way the music sounds and want to learn more: "It becomes kind of like an educational device as well as an entertainment." There are similar establishments across the country, each offering painstakingly curated jukeboxes stocked with punk, heavy metal, country and every genre in between.

In the home market, national retailers like Pottery Barn and Bed Bath & Beyond are selling tabletop jukeboxes with built-in radios that also play CDs and streaming music. Turntable giant Crosley has teamed up with the UK-based manufacturer Sound Leisure to release full size, Bluetooth-enabled models that also play vinyl. The first model, the Vinyl Rocket, debuted last summer and was followed by a limited edition model whose release was timed to coincide with the 5oth anniversary of The Beatles' iconic album, Sgt. Pepper's Lonely Hearts Club Band.

Scott Bingaman, president of Crosley's U.S. distributor, Deer Park, says that so far, only a few hundred of the new vinyl-playing jukeboxes have been made in the initial production run. But he also points out that the machines have just been reintroduced to the market after a 20-year absence, and when vinyl records first came back, the sales projections were largely underestimated.

The new Crosleys are built by hand and individually numbered — a rarity by design — and they're selling for about the same price as fully restored vintage jukeboxes: just shy of $13,000. If you want one, you'd better save up your quarters.